Johnny a/k/a Hiflew from Cards from the Quarry has been very quiet lately on his blog, but I know he is reading blogs and commenting.  That is a good thing -- don't give up on writing, though!

Anyway, I got a nice little PWE in the mail from him a couple of weeks ago, and I'm just now getting around to posting on it.  I owe Johnny a return envelope (trust me, I'm getting to those.  Really, I am.) of Rockies in their natural, Purple Toys R Us environment (along with some other stuff to surprise him), but I wanted to post these cards now. 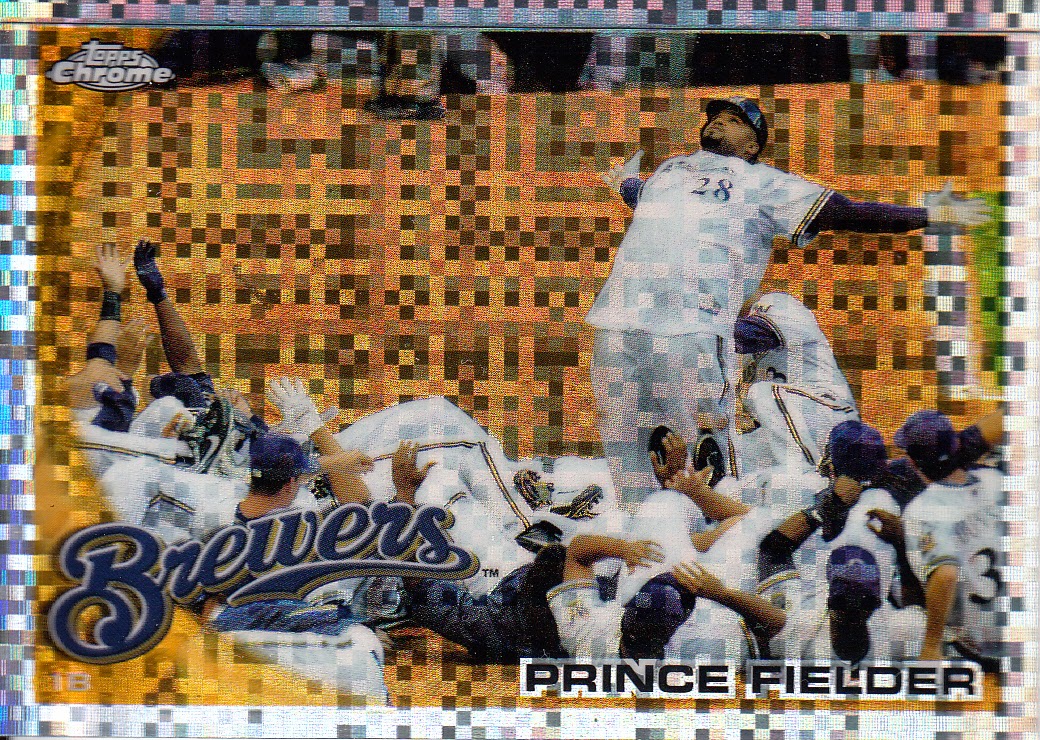 I make fun of Prince Fielder for being a big dude who is a vegan, but that's only because he left Milwaukee. I have to admit that I have loved this card in its natural, un-refractored/chromed state since I first saw it.  It is just a celebration of pure joy of a team having fun and winning.  This is a refractor, so it scanned weirdly, but it was a nice addition to the PF player collection. 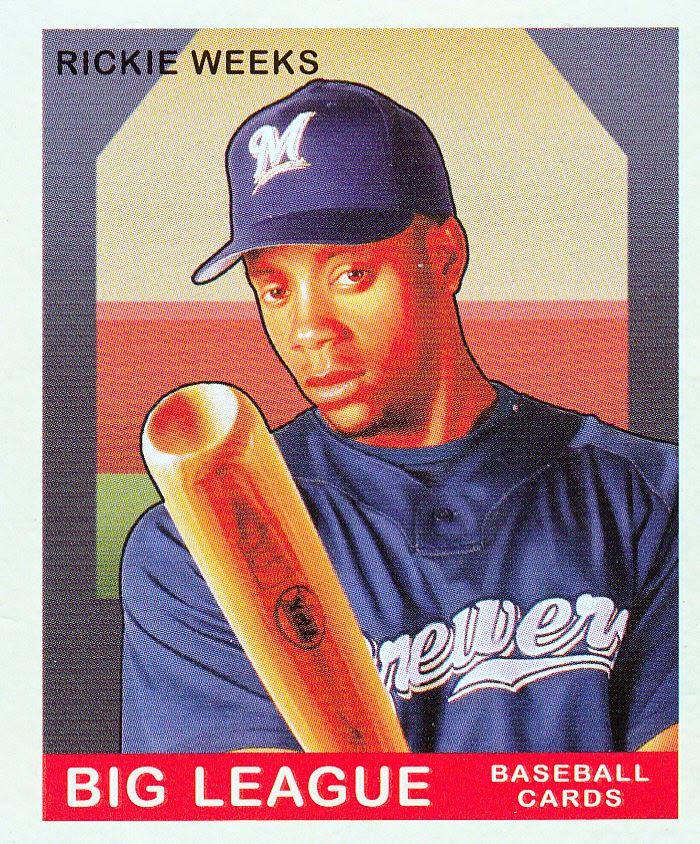 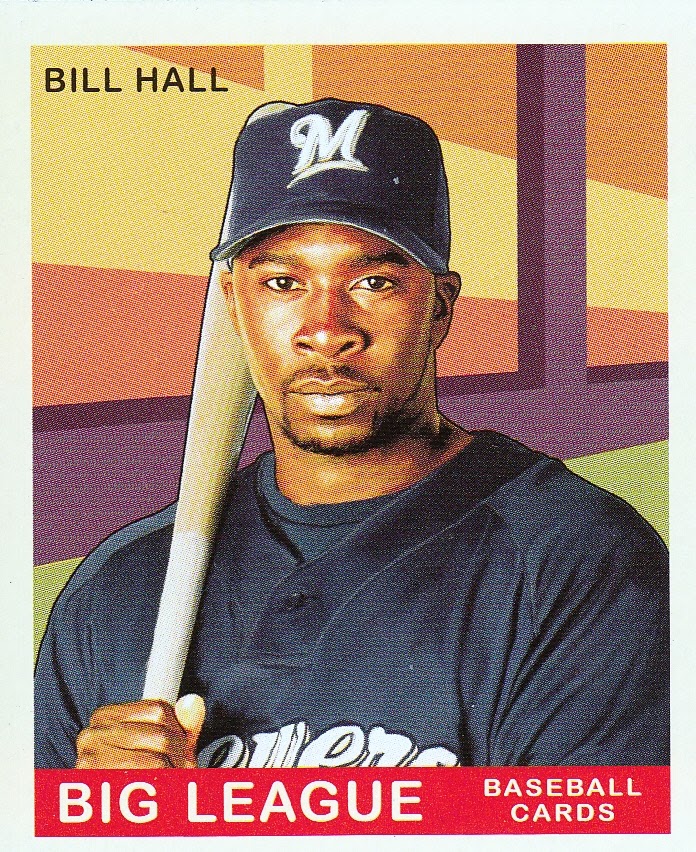 A couple of nice Goudey cards to add to the Weeks player collection and the stack of Bill Hall cards that I'm wondering whether I should have them morph into a player collection.  Probably not, but I have gotten a lot of his cards. 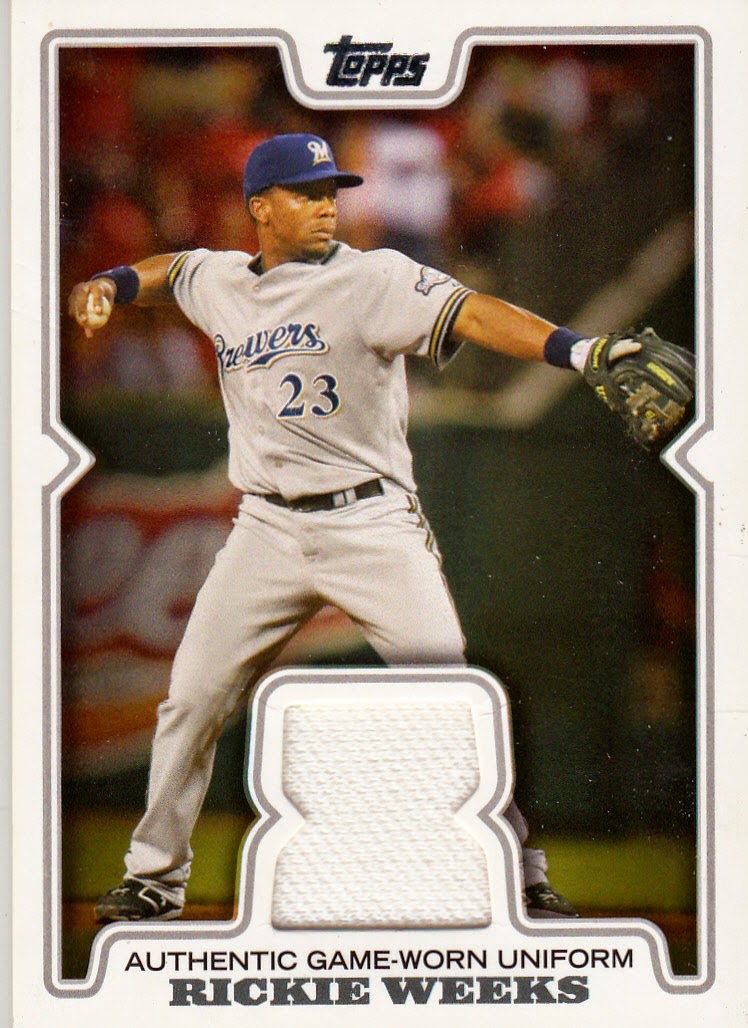 It's sort of sad to see how injuries have sapped so much of Rickie's power from his wrists.

Now that he's on the wrong side of a platoon with Scooter Gennett, I'm starting to feel like he's become a 2014 version of Cecil Cooper.  Cooper was a great player in his prime -- a fixture in the lineup at first base with one of the most mimicked batting stances and pre-pitch preparations in all of Milwaukee by the kids in my circles and me.  By the time 1987 came, though, he had a contract only through the end of that year and frankly didn't have the ability he used to have.  In fact, during Paul Molitor's 39-game hitting streak, Cooper had a streak of his own:  he did not play -- not even as a pinch hitter -- after the All-Star break.  Not even as a late inning substitute.  It was a sad end to his time in the majors, because a guy who did so much for so long for Milwaukee deserved better.  I fear the same is happening to Weeks -- he'll be gone after this year, certainly, and I can envision a point where he is frozen out completely in Milwaukee.  Let's hope it doesn't come to that.

Okay, I digress, but sometimes, Rickie Weeks deserves more than just a "hey, nice card."  Sort of like how Hiflew deserves more than simply, "thanks!"  But, all I can say right now is, "Hiflew -- thanks!"
Posted by Tony L. at 9:00 PM