One of the first guys I ever interacted with and traded with is Steve a/k/a Cardboard Jones f/k/a The Chop Keeper. I especially appreciate his interaction on Twitter, where he frequently feels like a voice of reason amidst a sea of greedy giveaway hawks, overzealous sales pitches, and strange bracket competitions.

It's been a couple of months since he sent me the four cards I'm going to blog about today. So in penance for that failure to post these cards with any kind of haste at all, I'm posting music of Steve's liking to go with the cards. Hopefully Steve still likes Taylor Swift.

At least I think so.

Anyway, here come the cards and the music courtesy of my pal from Idaho. 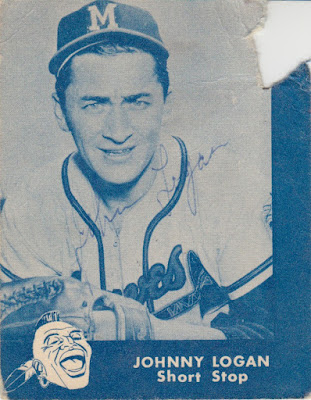 The first three cards are all from the 1960 Lake to Lake Milwaukee Braves set. I will note first that I do not believe that that is Johnny Logan's autograph on this card, as I have an exemplar that it does not match at all.

That out of the way, let's talk first about Lake to Lake Dairy. According to this article from a few days ago in the Wisconsin State Farmer newspaper, Lake to Lake was a dairy cooperative formed in 1946. The cooperative was formed because the dairy farmers wanted to be able to negotiate dairy prices more collectively and get better returns for their milk products. The cooperative formed in the  Manitowoc County area and included the surrounding counties such as Kewaunee and Calumet -- the same area that produced the "Making a Murder" series on Netflix. Lake to Lake Dairy was bought out by Land O'Lakes, Inc. in 1981.

The first band that I'll highlight is Black Country Communion. Members of this supergroup include Glenn Hughes, Joe Bonamassa, Jason Bonham, and Derek Sherinian. Hughes was the vocalist for a few iterations of Deep Purple and, for a short time in the mid-1980s, for Black Sabbath. Bonamassa, of course, is a legend in blues rock and was a child prodigy who opened about 20 shows for B.B. King at the age of 22. Bonham may be the best known of the group thanks to his famous father John Bonham being Led Zeppelin's drummer and thanks to Jason playing the drums for Zeppelin fairly regularly. Finally, Sherinian is a keyboardist who played in Dream Theater and has toured and recorded with Alice Cooper, Billy Idol, and Yngwie Malmsteen, among many many others.

For whatever reason, this is the first time I've heard this band and this song, "Collide." It reminded me a little of Soundgarden/Chris Cornell. That's what came to mind without watching the video. Call me crazy. 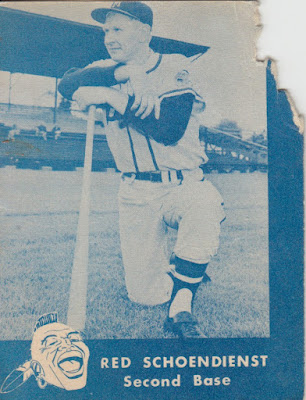 You may have noticed that these cards are in pretty rough shape -- missing big parts and all. That should come as no surprise, as these Lake to Lake cards were originally stapled to milk cartons distributed by the dairy around Wisconsin. As the Standard Catalog notes, these cards were also redeemable for prizes ranging from pen and pencil sets to Braves tickets. When redeemed, the cards were punched with hole punches.

It is an understatement to say, as the Standard Catalog does, that these cards "offer a special challenge for the condition-conscious collector." Also, as a further aside, the Ray Boone and Bill Bruton cards are very difficult to find -- Boone's because he was traded and the card was withdrawn, and Bruton's for no discernible reason (other than, perhaps, his card was a grand-prize type giveaway).

Steve is a pretty big fan of the Tedeschi Trucks Band. I have no idea if this song was in the "Tiny Desk Concert" that I posted in February last year (as recommended by Mark Hoyle, who also recommended Joe Bonamassa). Susan Tedeschi is a Bostonian by birth who attended Berklee College of Music in Boston. Her husband Derek Trucks is 9 years younger than her and is a Jacksonville, Florida, native who got his start at the age of about 9 playing with the Gregg Allman Band. Good stuff here. 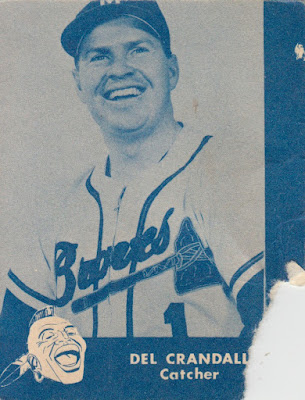 The last of the three Lake to Lake Dairy cards was Del Crandall. If you can find any of these in Near Mint condition, you'll pay a pretty penny. Even in 2011, the price for a NM Red Schoendienst was estimated at $75 and a Hank Aaron NM was estimated to cost $500.

If you're interested in getting me an early Christmas gift, a complete set of the 28 cards is available on eBay for $1,499.99, plus $2.99 shipping. You know, that kind of pisses me off that someone would charge $3 shipping for a $1500 set. You mean you can't spring for it? You mean you're just going to toss them into a bubble mailer and ship them that way? Come on.

For what it's worth, you will never be able to see Saga live again, if they are to be believed. They performed a farewell tour in 2017 and 2018 and held their last show in Toronto at the Phoenix Concert Theatre on February 24. It was a good run, I suppose. 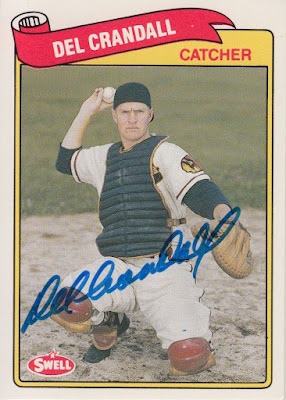 Finally, the last card was not a 1960 Lake to Lake but, instead, a 1989 Swell Baseball Greats Del Crandall card autographed by the man himself. Do these "Swell Baseball Greats" cards qualify as being 1980s oddballs? I think they probably do, so I will have to add this set to the queue to be written up. As I've mentioned on Twitter, I take requests, after all.

So, I cheated a bit here. Steve was singing the praises of a Michael Schenker Group album awhile back, but I was sort of jonesing for this old McAuley Schenker Group song from 1987 called "Gimme Your Love." It's great to see how often rock bands in the 1980s tried to help down-and-out club dancers by giving them roles in rock videos.

This song and band were much better than many of their contemporaries who got more famous, such as Slaughter, Winger, and Poison. Those guys couldn't sing or play in the same state at MSG, to be fair. This song still rocks.

As does Steve -- he's one of the best guys out there to trade with or just talk with on Twitter.  Thanks, Steve.
Posted by Tony L. at 7:43 PM 8 comments: