Memorabilia Monday: Back in My Day, Sonny....

I do not believe that people have a genetic predisposition toward hoarding.  Hoarding is a learned trait that is passed down from generation to generation like some weird milk jug or, in my wife's case, an Old Cabin Bitters Bottle from 1863 similar to one that seriously was sold for over $4,000 at an auction: 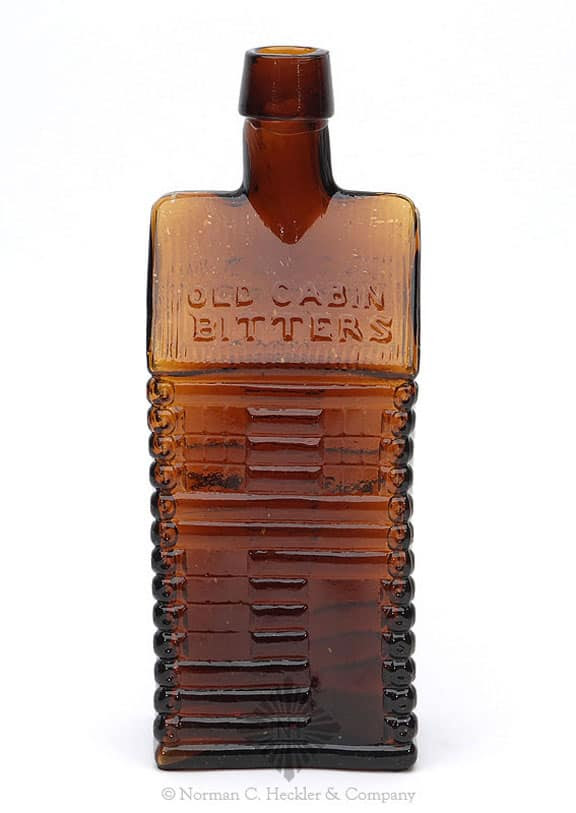 That's not my memorabilia for Monday, though.  MY Monday memorabilia is much more akin to my inherited tendencies that I fight regularly to keep everything that might have value of over $1 one day. These pieces of memorabilia, though, should bring back some memories for all of us over the age of about 35:

That's right -- All-Star ballots.  Back in the old days -- read as, the 1980s and 1990s -- the most advanced computers that anyone in baseball felt comfortable having around were the old punch card computers from about 1968:

In fact, rumor has it that this photo shows Bud Selig in 1971 trying to figure out how to avoid free agency ever coming about through the use of sophisticated express keypunch computation.

In seriousness, I have never understood why the fans could be entrusted to select the players to start in the field but not be allowed to vote for any pitchers.  Was Major League Baseball afraid that people would try to select their rival's best starter for the All-Star game in hopes that he would get hurt? Or that he would be unavailable for his team's next game against their team?  In the days of the four-man rotation, that usually would not have been a problem with a Tuesday All-Star game and the next series being a three- or four-game series starting on Thursday or Friday. Even in the worst case scenario, that pitcher would be ready by Sunday's game.

Where's the line asking for your Social Security Number?

Thankfully for baseball, by the time 1987 rolled around, the All-Star Ballot became the All-Star booklet sponsored by USA Today and Chevrolet! 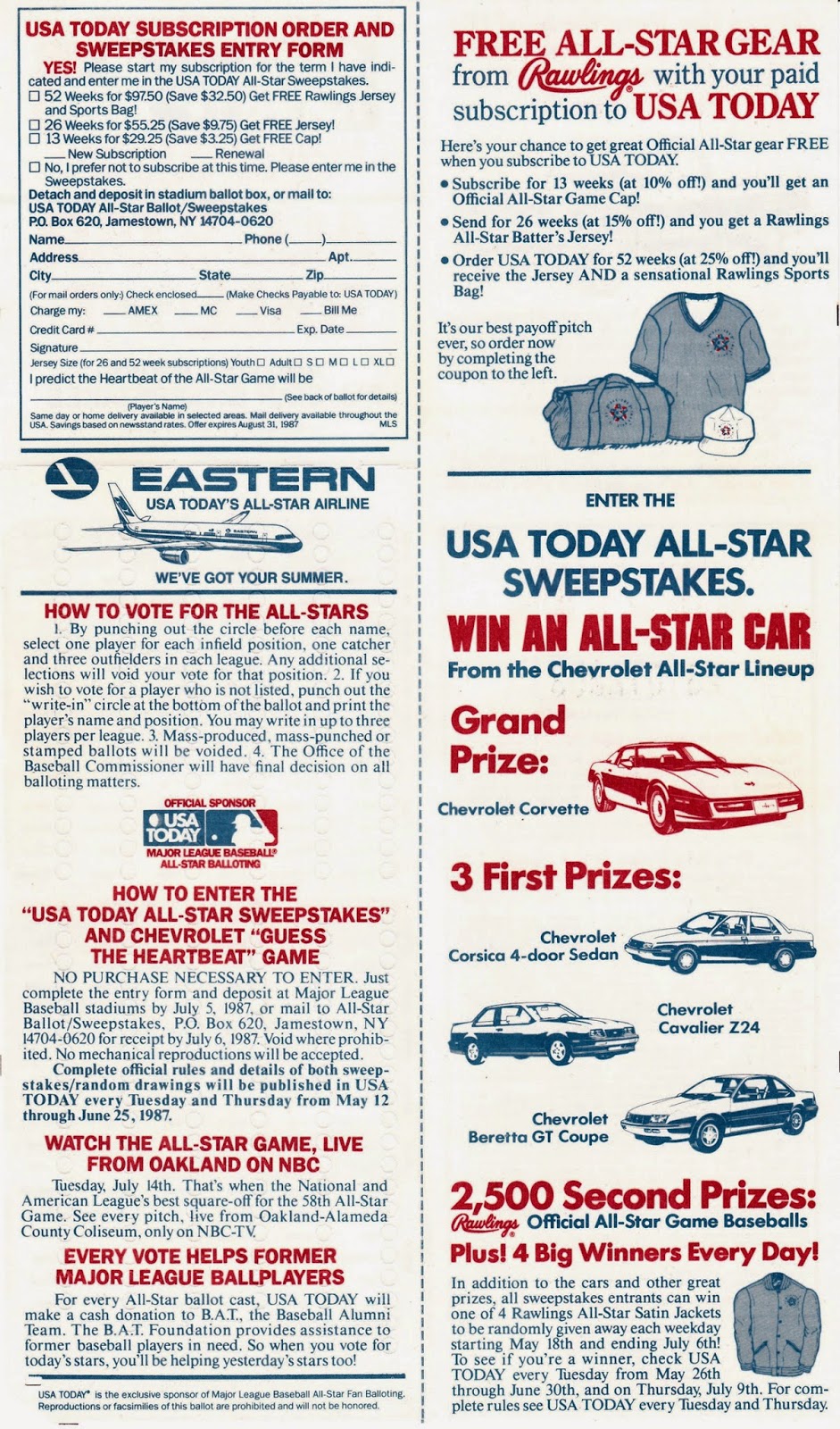 Ueberroth must have seen this ballot and said to himself, "Now, that's more like it!"

But, these are cool reminders of the mid-1980s for me.  I mean, where else can you find reminders of players like Enos Cabell, David Green, Ozzie Virgil, Ron Kittle, Lee Lacy, Claudell Washington, and Mike Easler?  What's that you say, on baseball cards?  Oh.  Right.

That's your memorabilia Monday.  Now I need to repack my 80 pounds of all-star ballots.
Posted by Tony L. at 8:40 PM 3 comments:

Going with a more recent release last weekend saw a couple of cards get grabbed.  Heck, I even had a race to the ballot box, so to speak, for the Matt Harvey black refractor.  I shouldn't be surprised, I guess, since there are only 65 of them.

As with the previous week, anything that is unclaimed is still fair game, but it is just as likely that I will put those cards on eBay to help fund my habit.

In fact, here are my active eBay auctions:

Tales from the Repack, Part II

So, what else could these $4 packages of gold provide?  I mean, I got plenty of Hall of Famers, so what more could I ask for?

Well, each of these new repacks also came with Topps Chrome Orange on the front.  So, here are the 5 Orange Chrome cards I got: 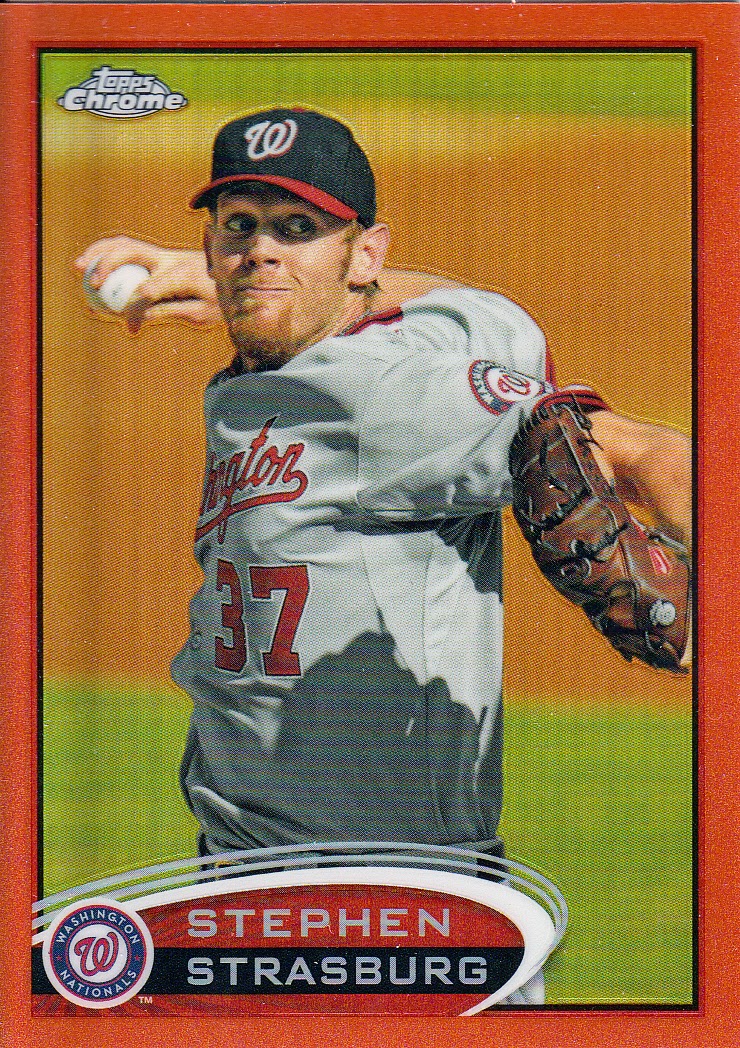 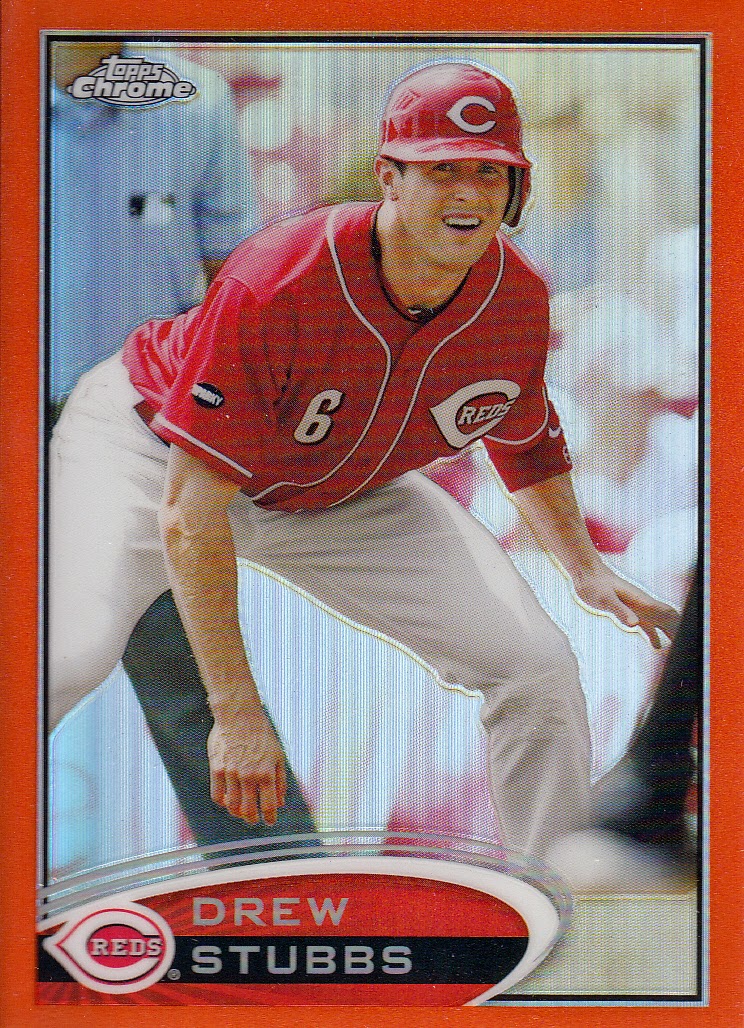 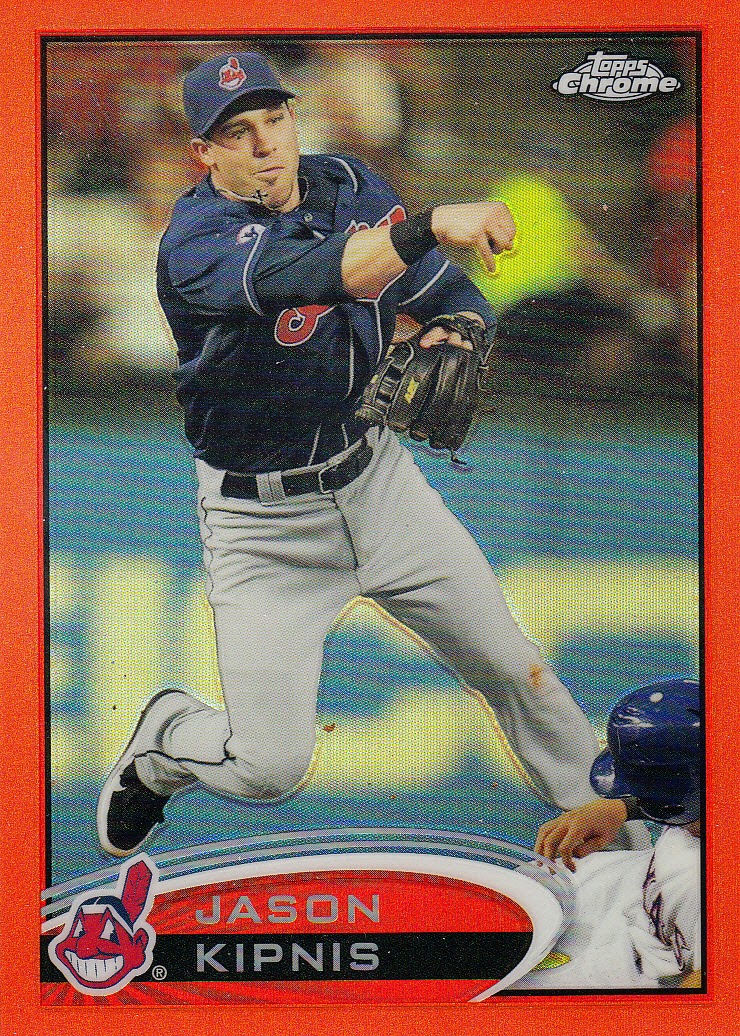 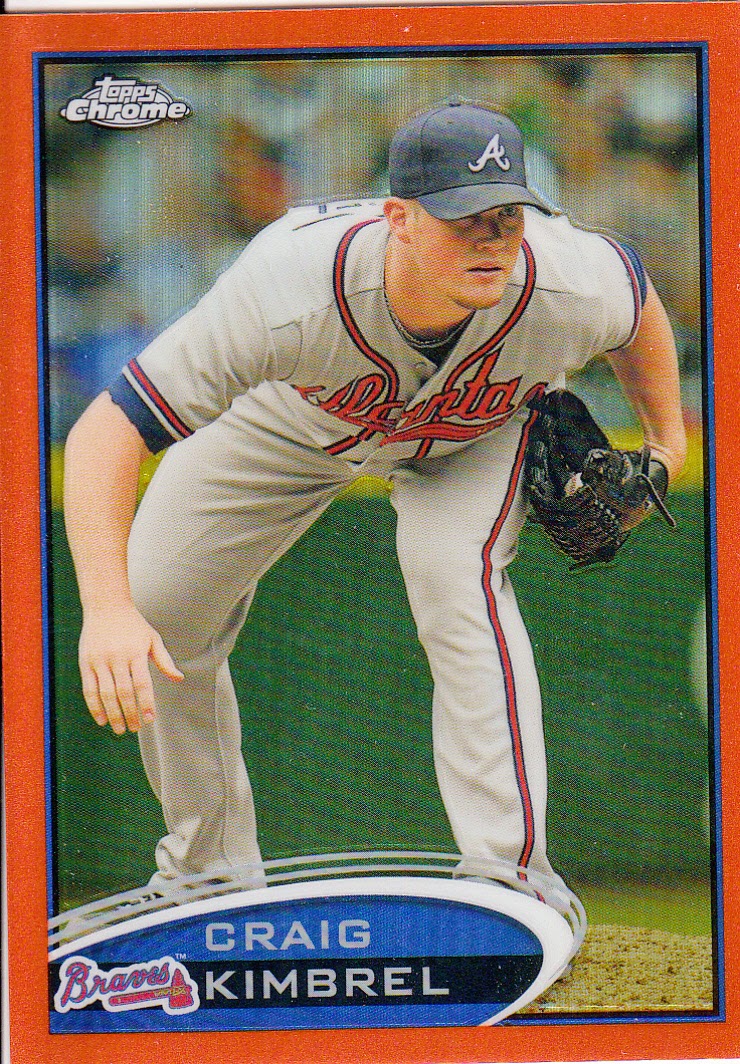 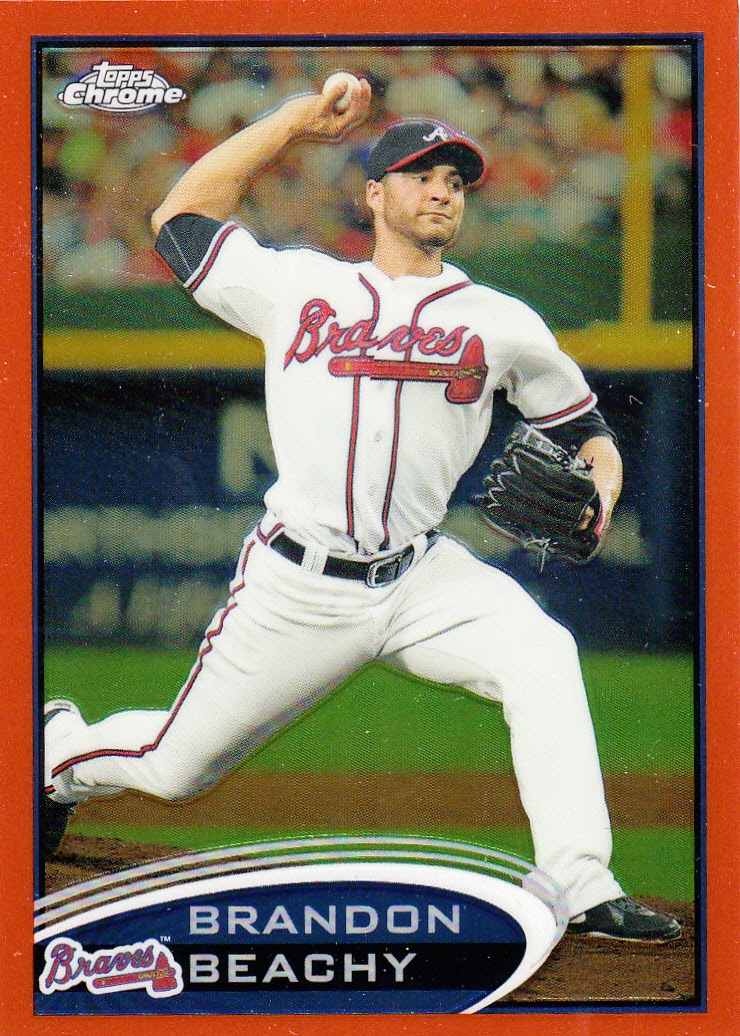 A couple of Braves (though I wish Beachy didn't have to visit the Tommy-John doctor again) and some other very nice Chrome Oranges.  It's fun seeing these on the front of the repacks, because these cards still have a good audience looking for them.

Then, there was the random vintage cards.  I had a pretty decent number of 1976 Topps again. 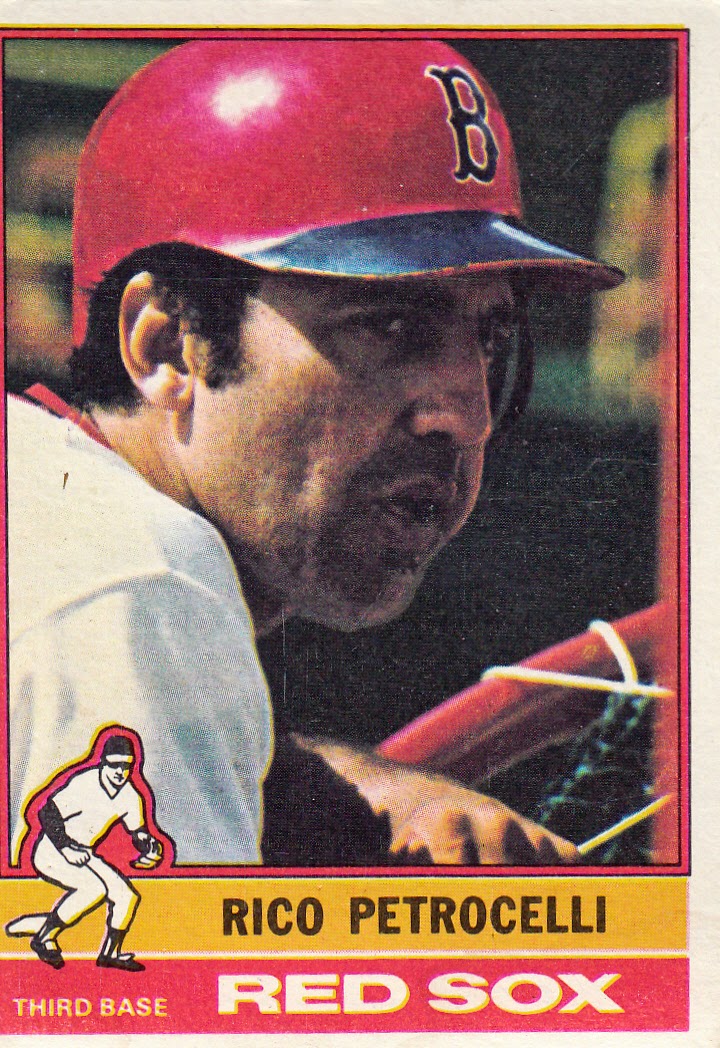 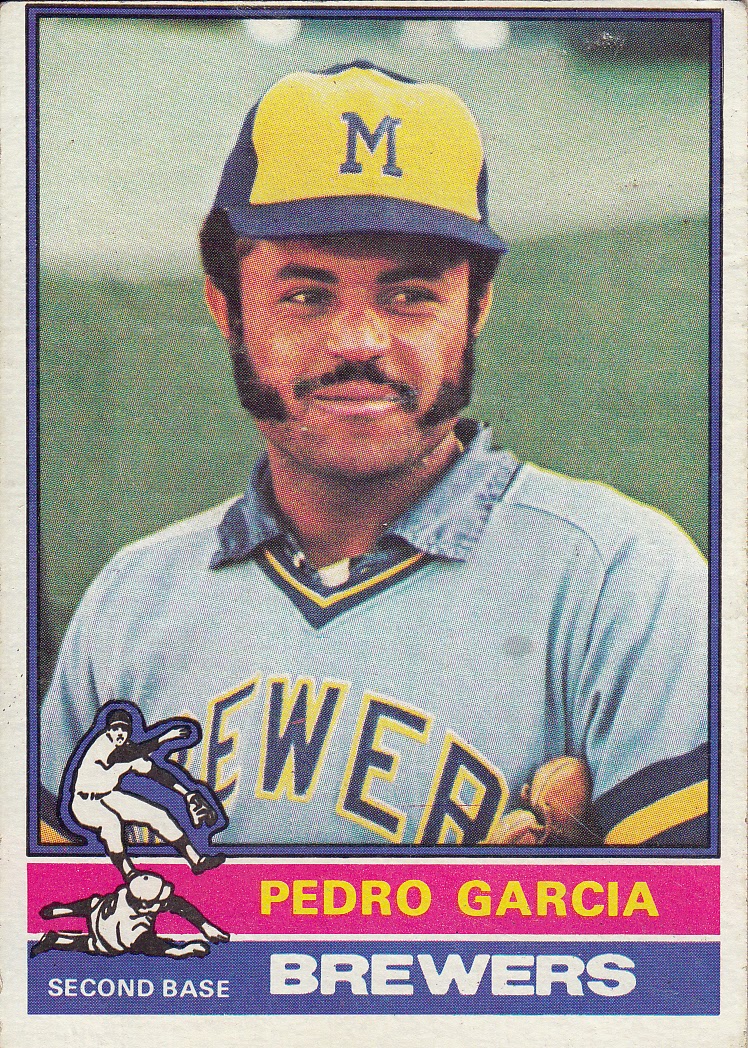 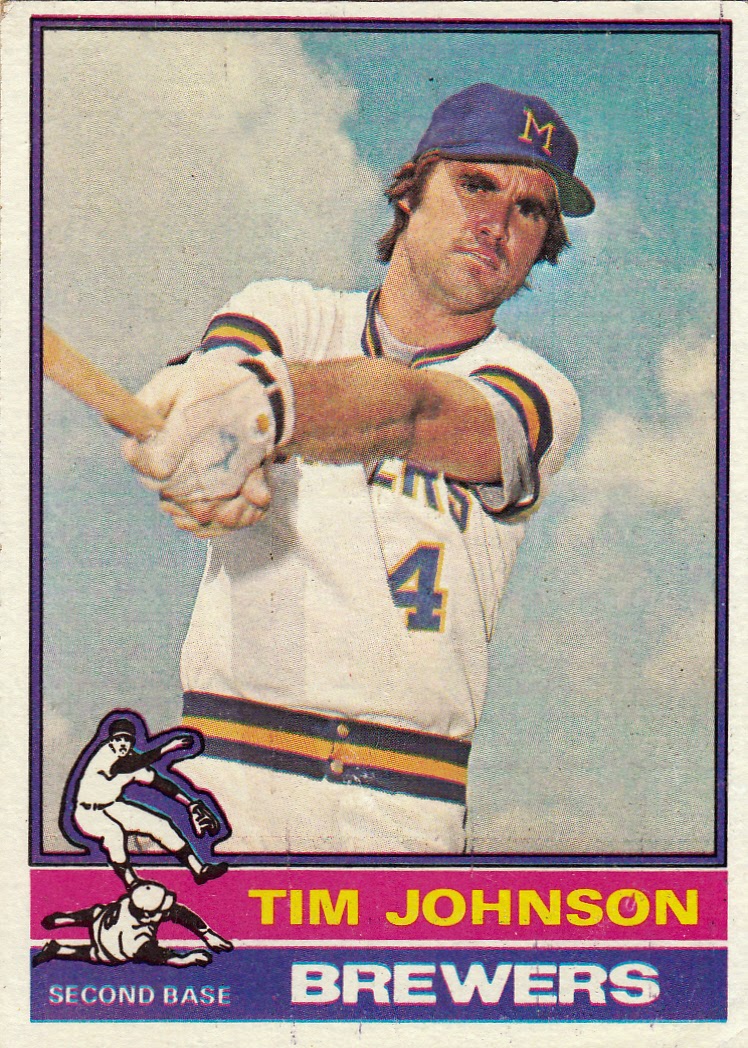 And, for my tastes, what's better than two vintage Brewers?  I mean, I can only have dreams about having sideburns as cool as Pedro Garcia has in this photo.  Then, to get a Rico Petrocelli card?  I mean, Rico left the game early --- at age 33 -- but he was the prototype for the good hitting shortstop.  He hit 40 homers in 1969 (and only drove in 97 runs!) and was an all-star twice in his career.  He isn't a Hall of Famer, but he was a star in his day.  A great card to grab.

Finally, let's close with random fun cards that are the type that make card collecting fun.

My first trip to my Local Card Shop

I hopped in my car just after lunch today and drove over to the local card shop.  My local card shop, it turns out, is the brick-and-mortar place known as Freedom Cardboard.  Yup, the shop 6 miles from my house is the host of one of the most active sports card forums around.

I didn't know what to expect from the place because I have seen mixed reviews online for it.  To keep the doors open -- and I don't fault them for this -- FCS has much more store area for comic books and Magic: The Gathering than it does for baseball cards.  As an aside, I should have mentioned to the guys there that one of my college roommates is something of a legend in the M:TG world; he might have appreciated it, I suppose.

That said, the sports cards -- and, in particular, the baseball cards -- didn't get a lot of shelf space at FCS. No matter.  I still dropped more money than I should have there, and I will be returning.

What did I buy? Well, I tried to satiate my burgeoning crush on the 2013 Topps Archives cards.  The card designs that bring back the 1980s (and 1972 too) are just too much nostalgia for me to resist.  I bought the two hobby pack boxes that FCS had there, and I came home and ripped them open.

I still like the base set a lot, and I was not disappointed at all with my purchase.  I hit all the expected numbers in terms of short prints, tall boys, 1983 All-Stars, etc.  So what were the cool hits I got?  Let's start with the refractor inserts, all numbered to 199: 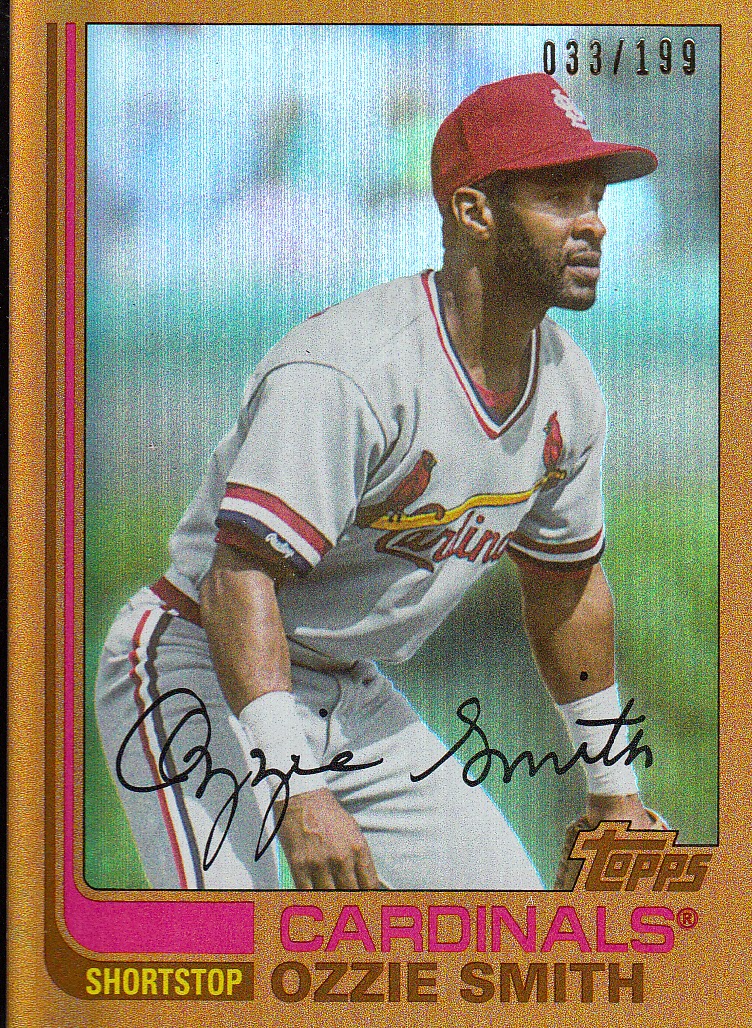 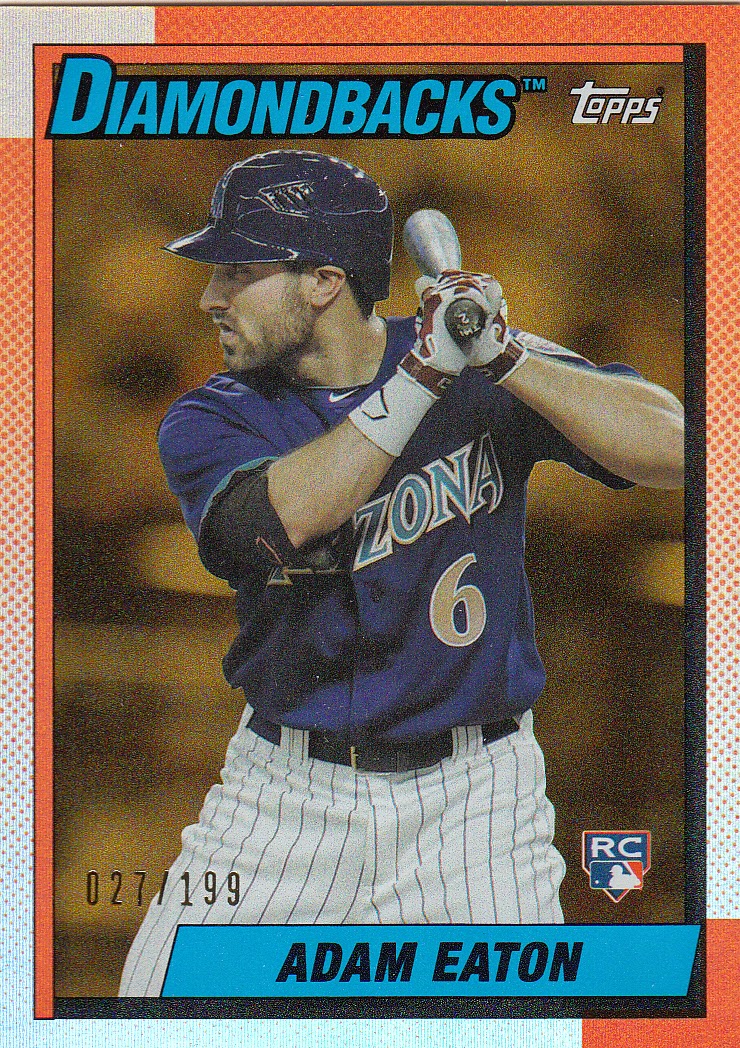 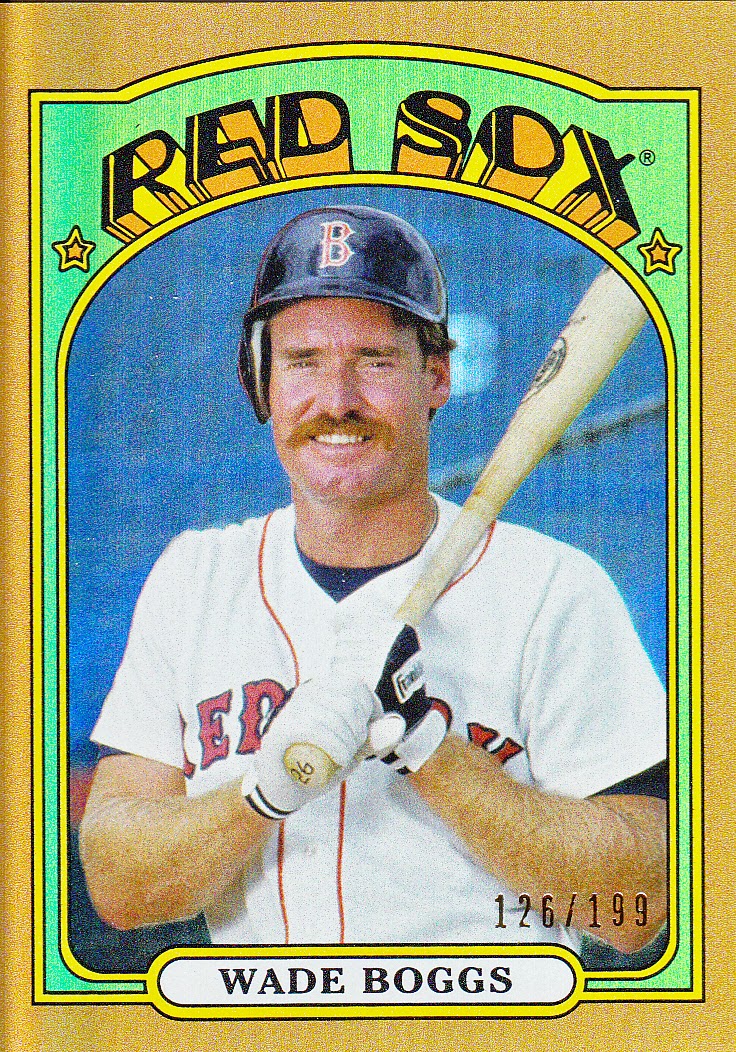 I also got two of the stained-glass window cards, The Gallery of Heroes: 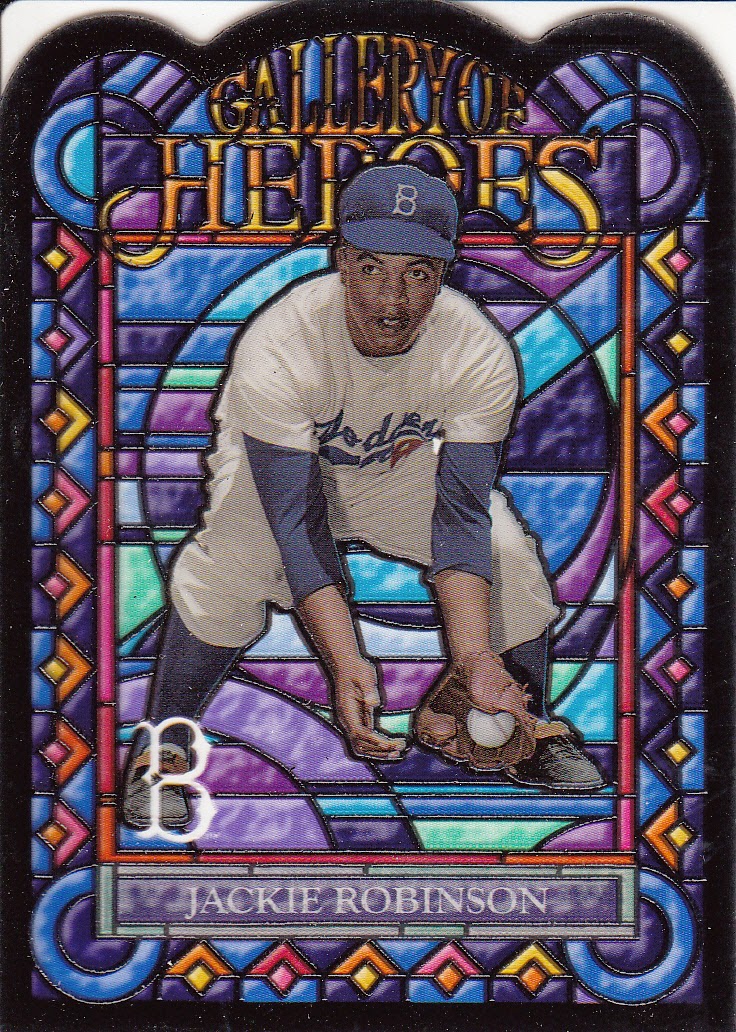 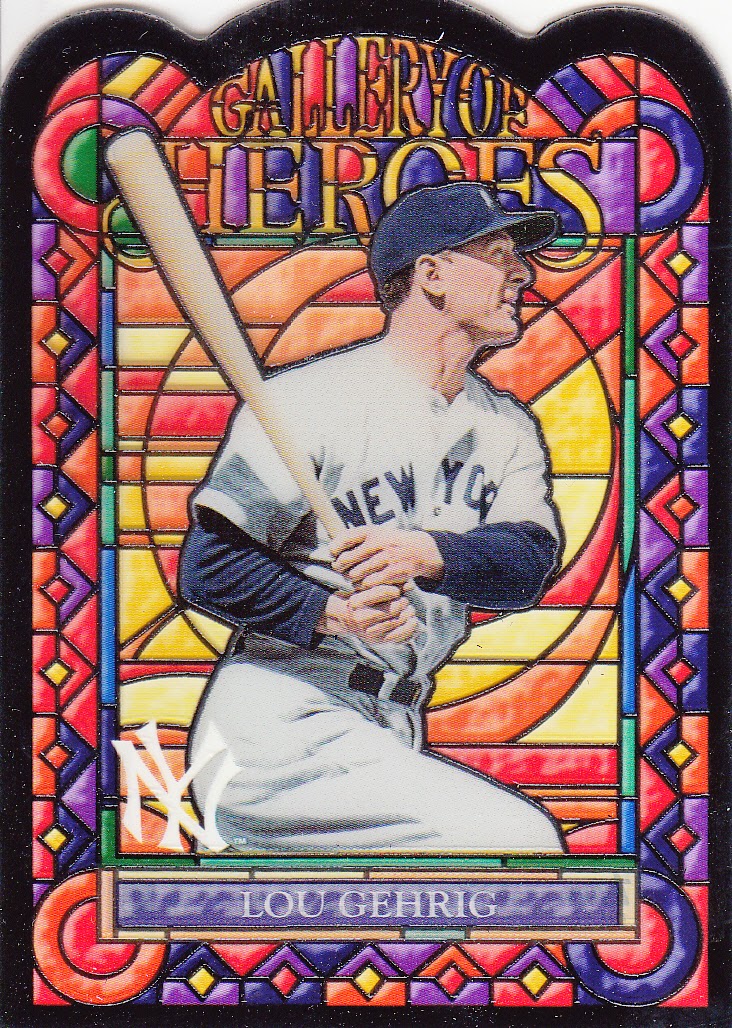 Then, there were the autographs.  As some of you might recall, the Archives hobby boxes promise two autographs per box.  I got two boxes, so I should have four autographs. Here's what I got: 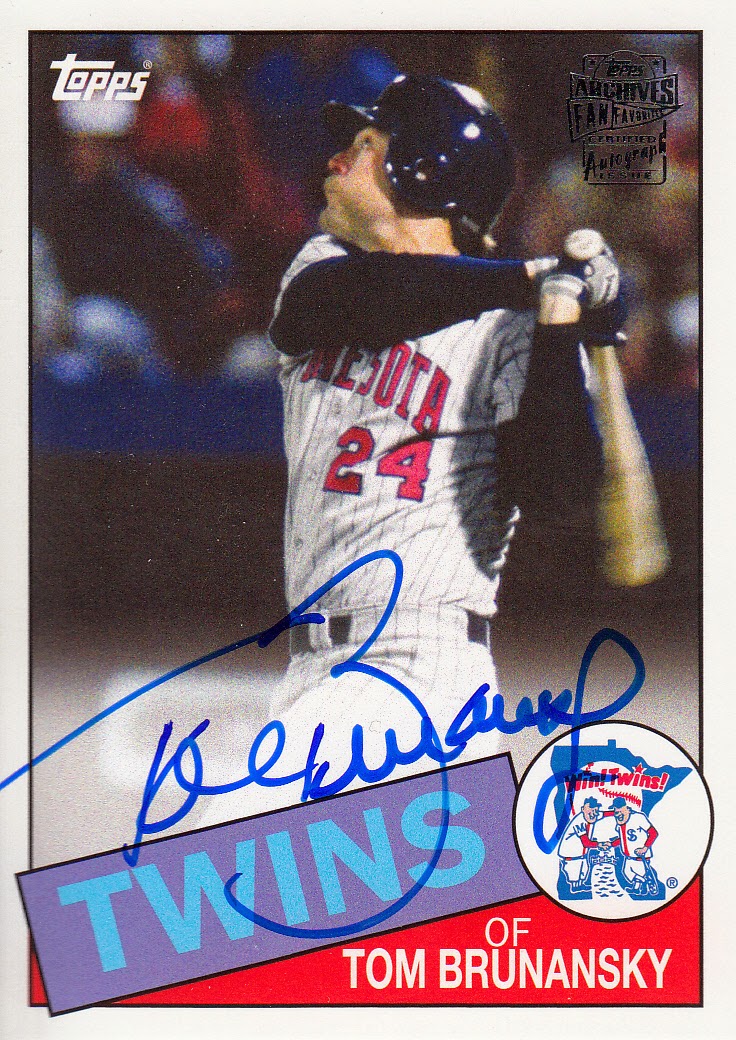 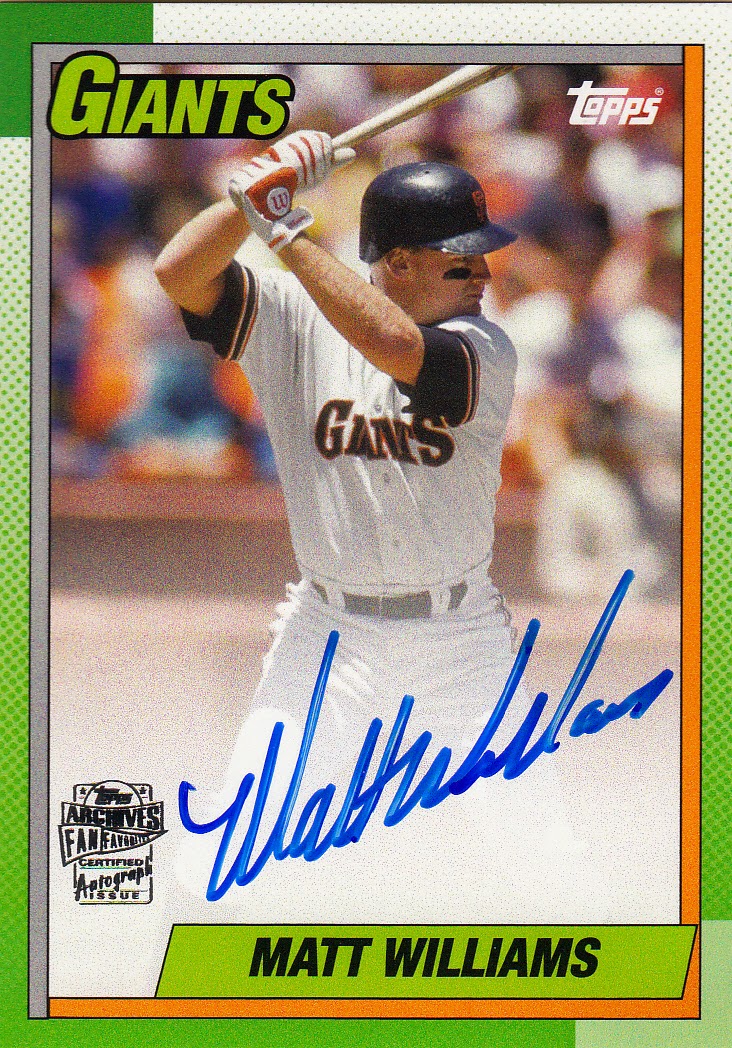 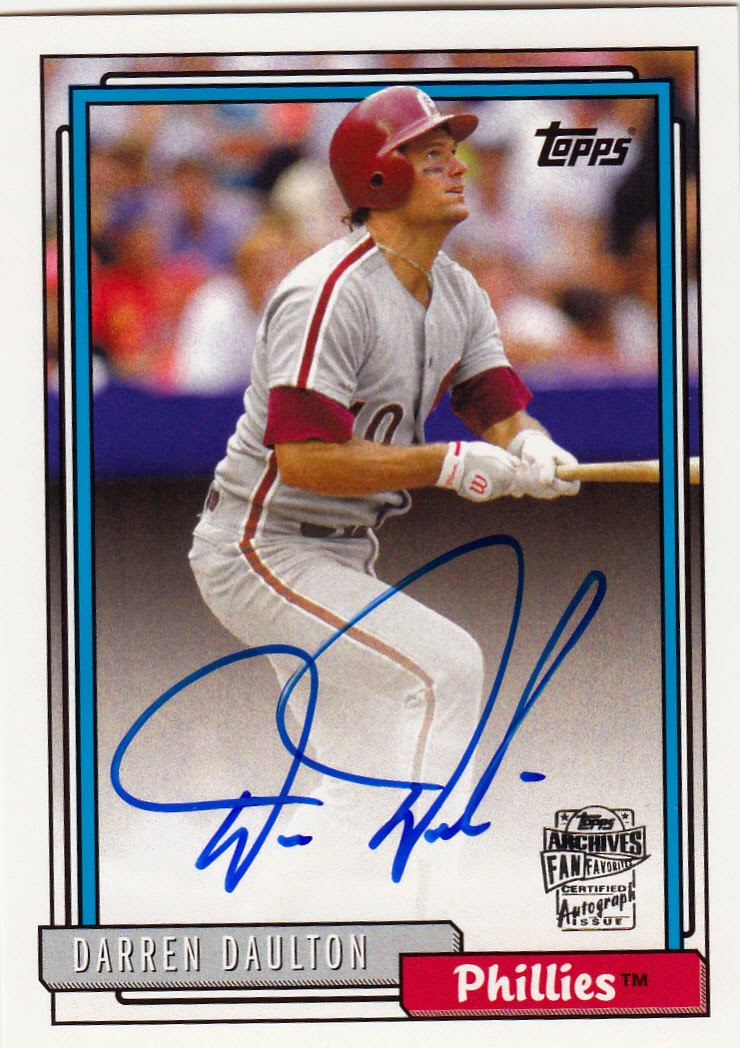 Tom Brunansky was a very good power hitter for the Twins in the late 80s.  Bruno started with the Angels, then bounced from the Twins to the Cardinals to the Red Sox to the Brewers and back to the Red Sox.  He only appeared in 96 games for Milwaukee and hit just .187.  He was done in the bigs at age 33 and never returned after the 1994 strike.

Matt Williams, of course, played for the Giants, Indians, and Diamondbacks over the course of his career. He was on pace to break Roger Maris's record in 1994 before the strike intervened -- he had 43 homers in just 112 games.  He is now the manager of the Washington Nationals.

Then there is Darren Daulton.  Perhaps it is my background as a catcher as a kid that gives me a soft spot for guys like him and Gary Carter.  I always liked Daulton -- he was hard nosed, got beat up behind the plate, but kept hitting and hitting.  He was nearly never healthy -- he played over 100 games in just 4 seasons, and lead the league in 1992 in RBI.  I think I liked Daulton because I got him as my catcher in a Fantasy League for the 1992 season and he blew away all the projections out there with his crazy season.

Okay, so that's three autographs.  I did get a fourth: 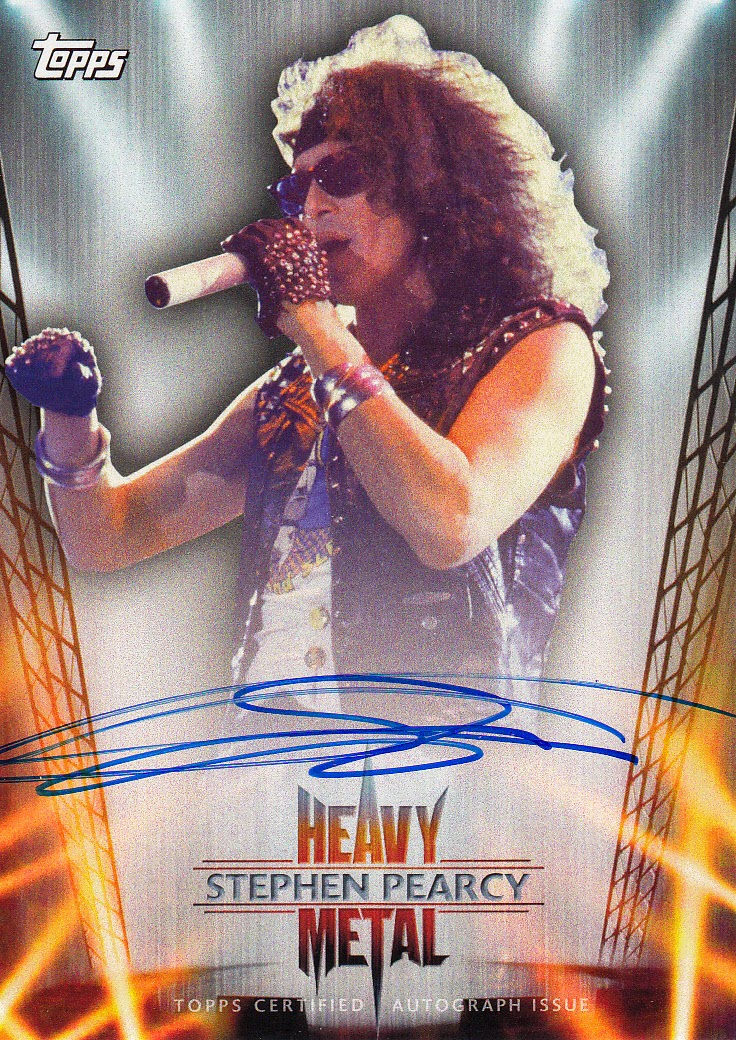 I graduated high school in 1990.  So, RATT was right in my wheelhouse in terms of music, timing, and all that.  They were a decent band.  They were never, ever Guns N Roses, though.  So, I threw this card at eBay as quickly as I could say, "Round and Round."

Let me know if you want to trade for the cards I've put up or if you are interested in any of the Archives cards.  Thanks for reading.
Posted by Tony L. at 10:30 PM 1 comment: