This week's edition of Memorabilia Monday features items that I received back in about 1987 or so.  I was at the height of my autograph-chasing days, and I had no fear in terms of sending cards -- even "expensive" cards -- through the mail to a player to try to get him to sign the cards.  I don't recall losing too many cards, to be honest, but there were a few times where the cards were returned unsigned.

In at least a couple of those instances in which the player did not sign the cards, either the player or his team (most likely some poor intern in the front office) was kind enough to package the cards up with a larger photo or postcard to at least have made my attempt at getting a signature pay off somewhat.

What you see below is what I got back. 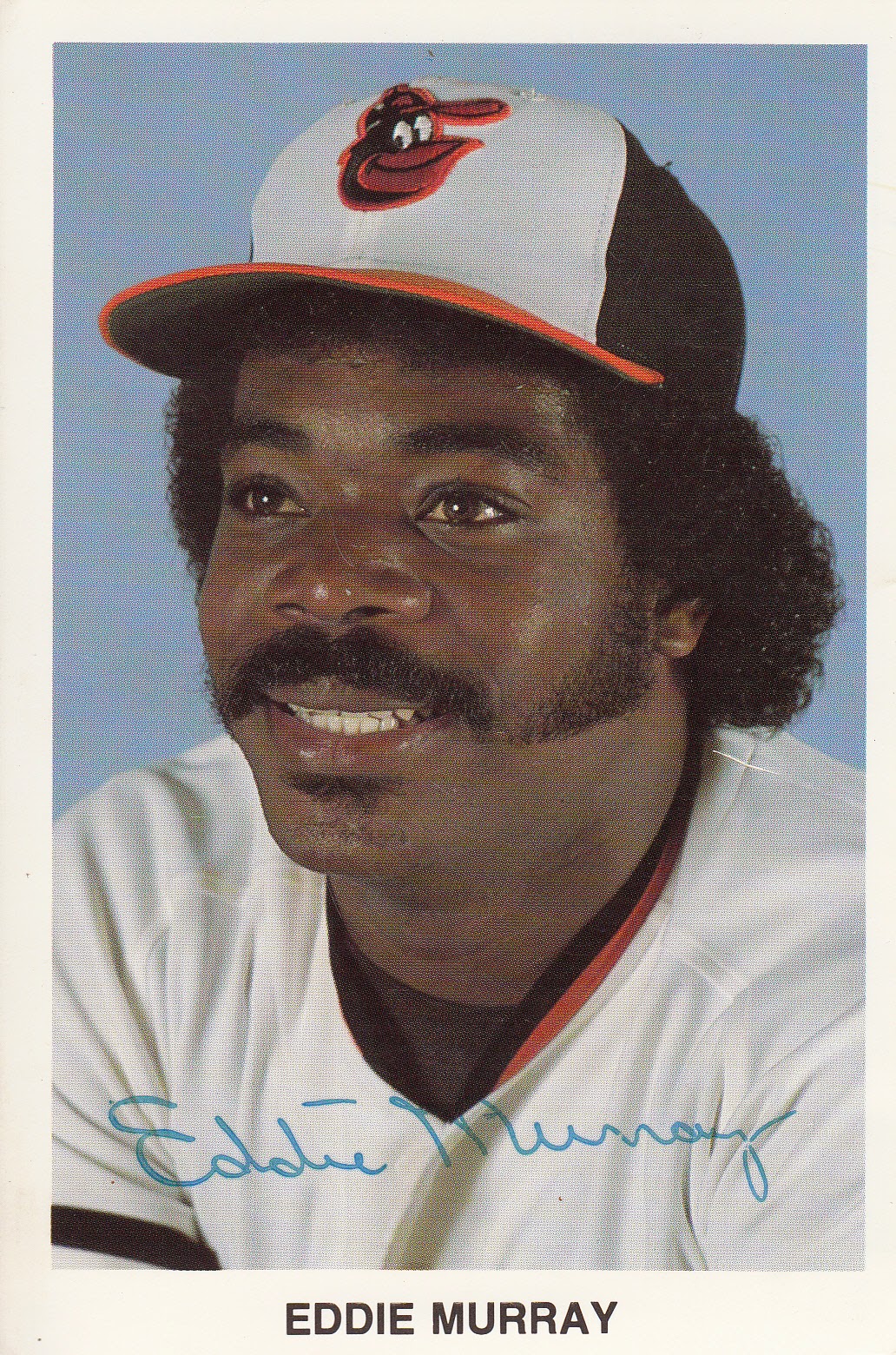 This Eddie Murray is one of the team-issued postcards from the mid-1980s.  It was disappointing that Murray did not sign any of the cards that I sent, and it was similarly disappointing that the signature here is, at best, an autopen signing. 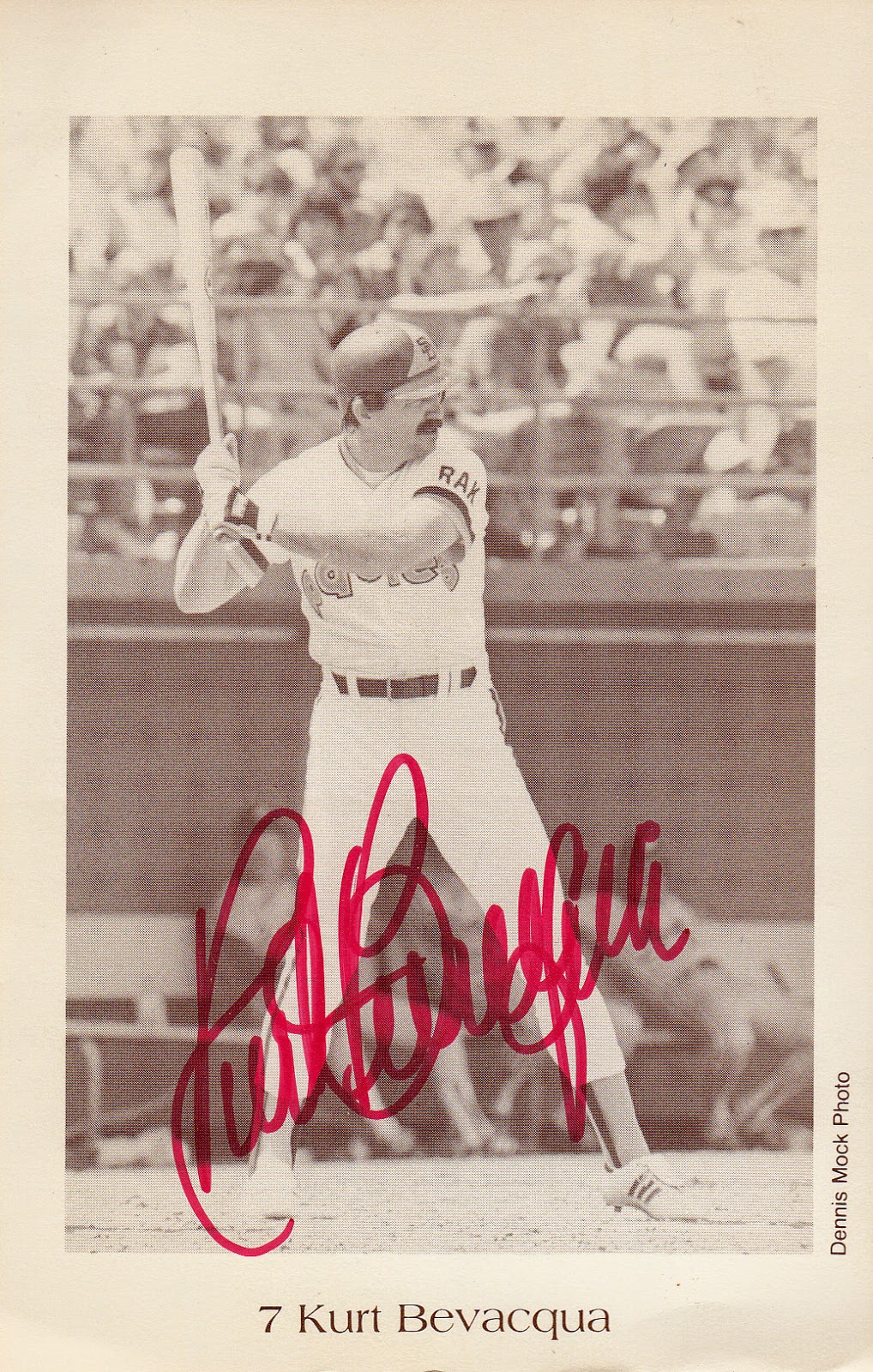 Kurt Bevacqua was the other side of the coin from Murray's disappointment.  Not only did he sign every single card I sent to him -- including one duplicate, I believe -- he even threw in an extra team-issued blank back 3x5 photo that he signed.  Gotta love the red sharpie too! 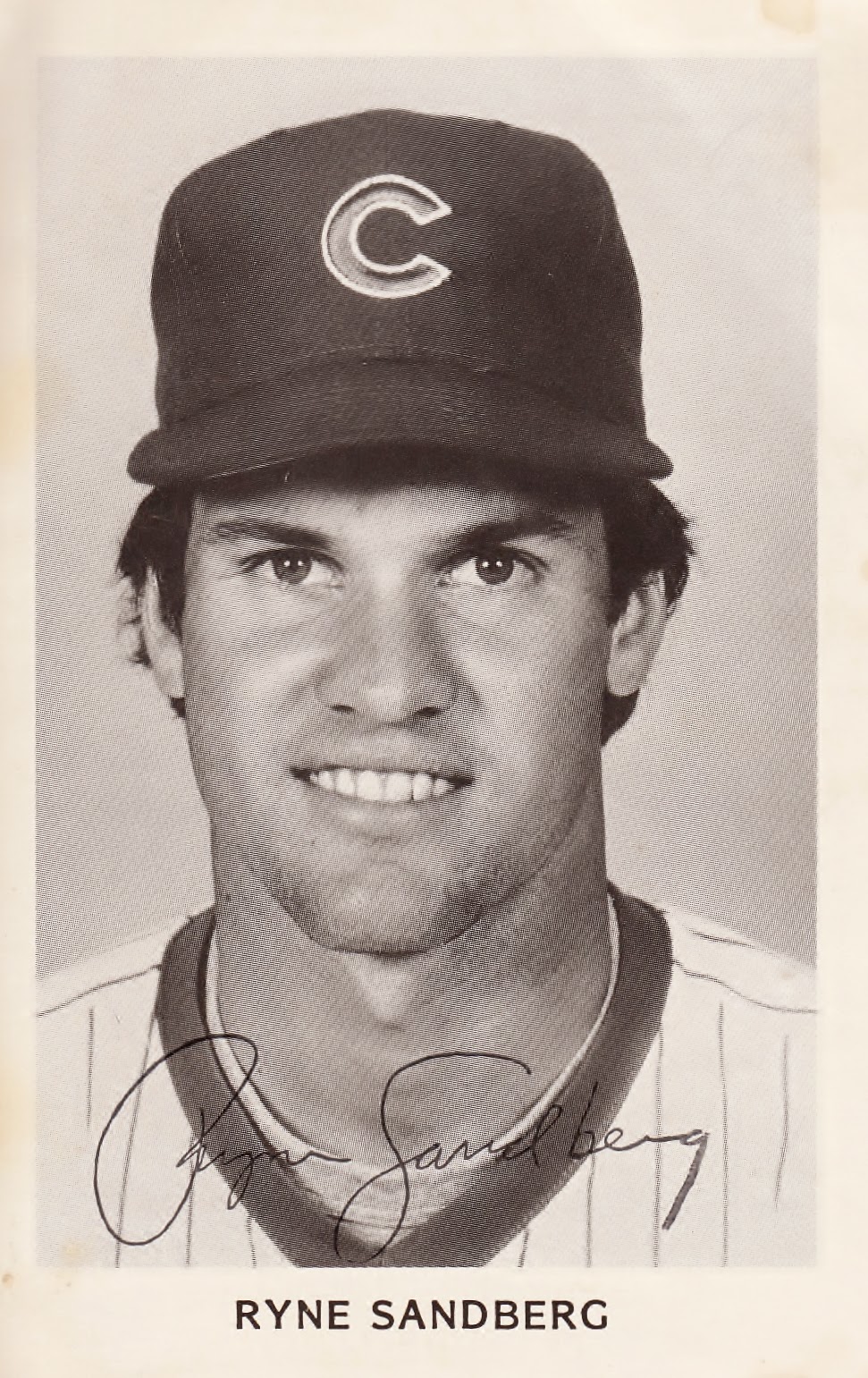 More disappointment from another future Hall of Famer.  Certainly, at his peak as a player, Ryno must have received far more mail than he could have ever hoped to sign and return. Getting back only an off-center team-issued blank backed photo with a stamped signature on it was very disappointing.  Perhaps this is the reason I never became a big Ryne Sandberg collector. 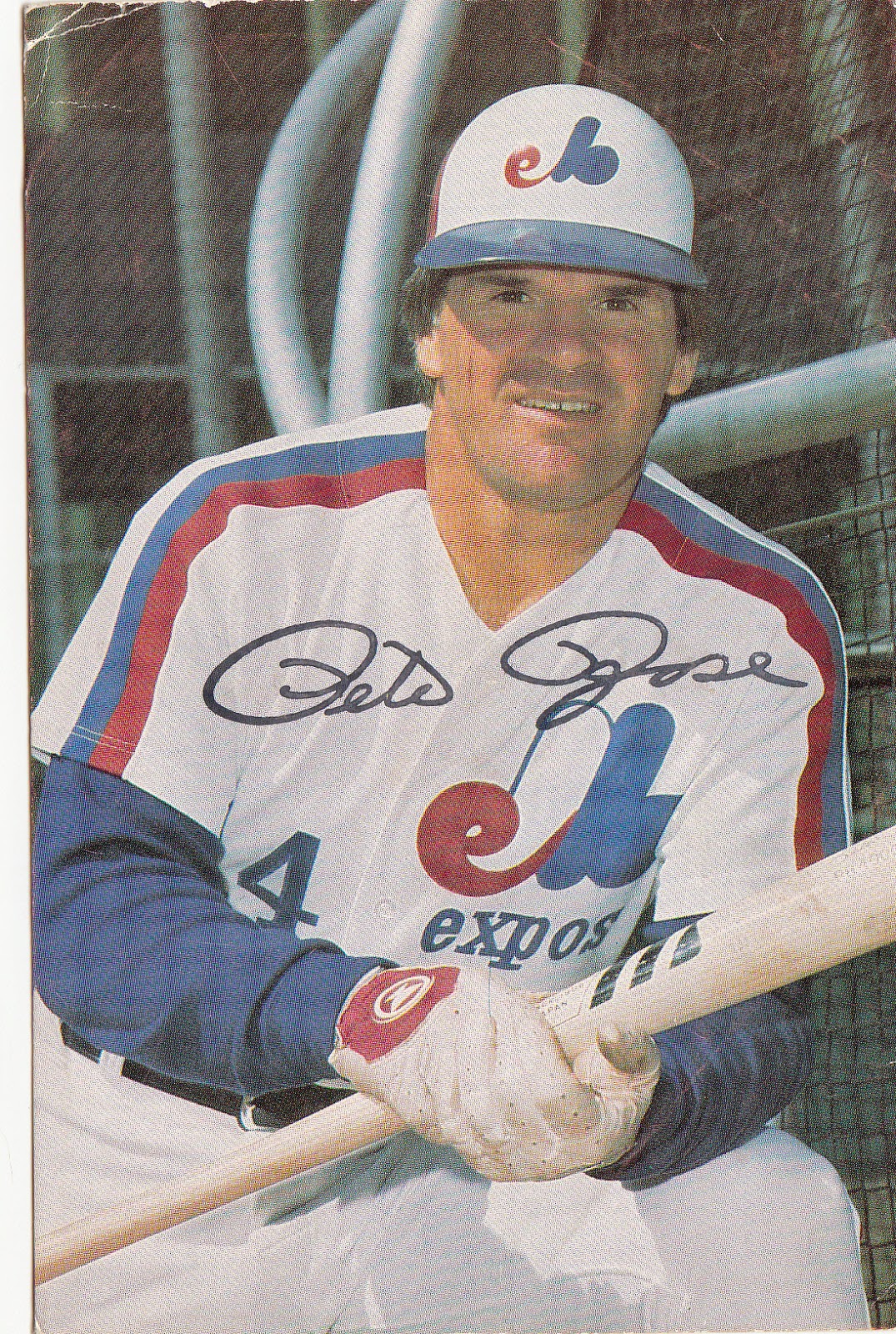 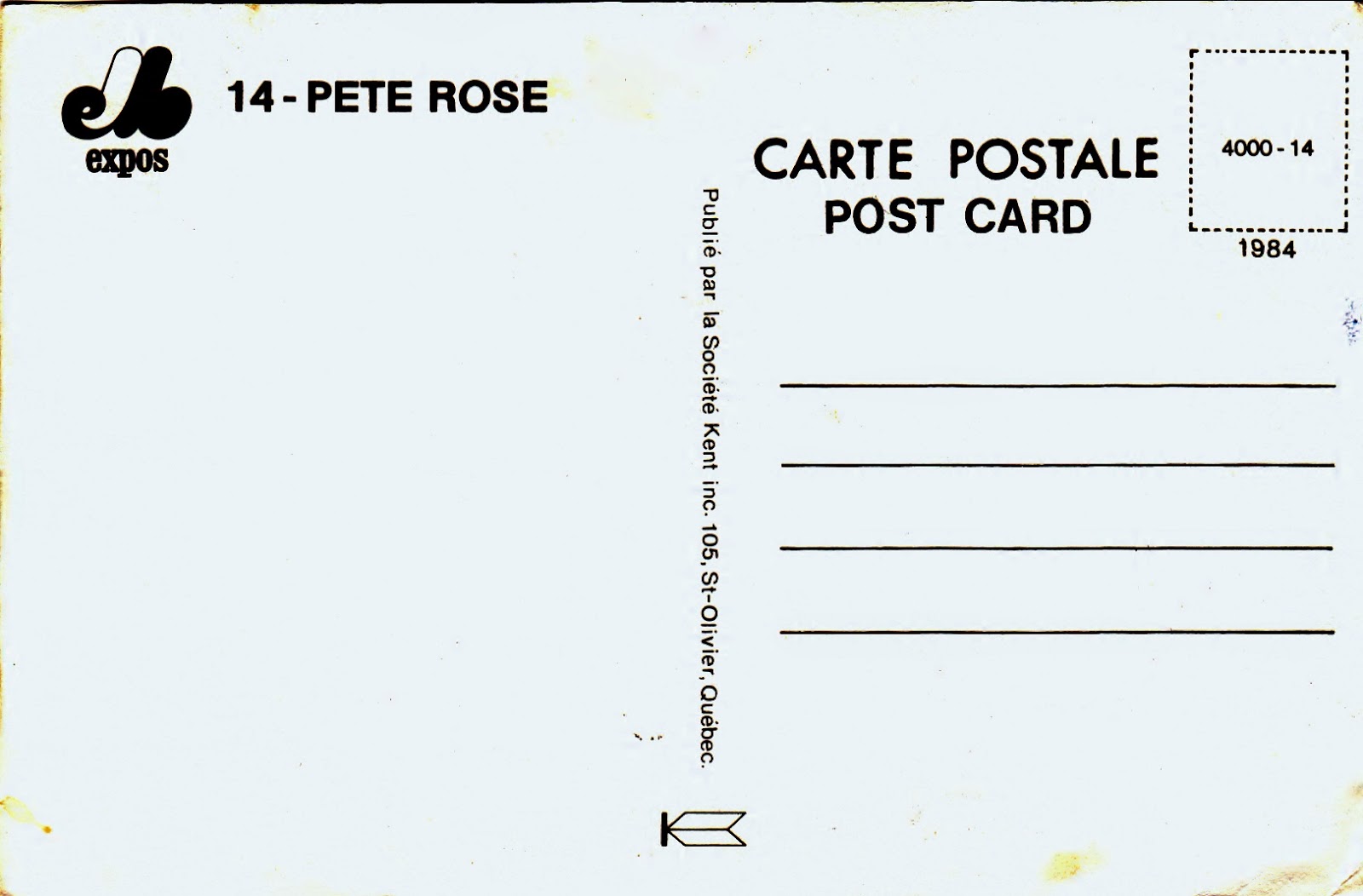 Another Hall of Famer, another stamped postcard.  This postcard is sort of cool for being one of those "he played for them? Really?" type photos, because no one really remembers Pete Rose as an Expo.  But, getting this postcard back after I somehow procured enough Canadian postage to get the cards I had sent to him back into the US was pretty annoying.  I never liked Pete Rose after this. 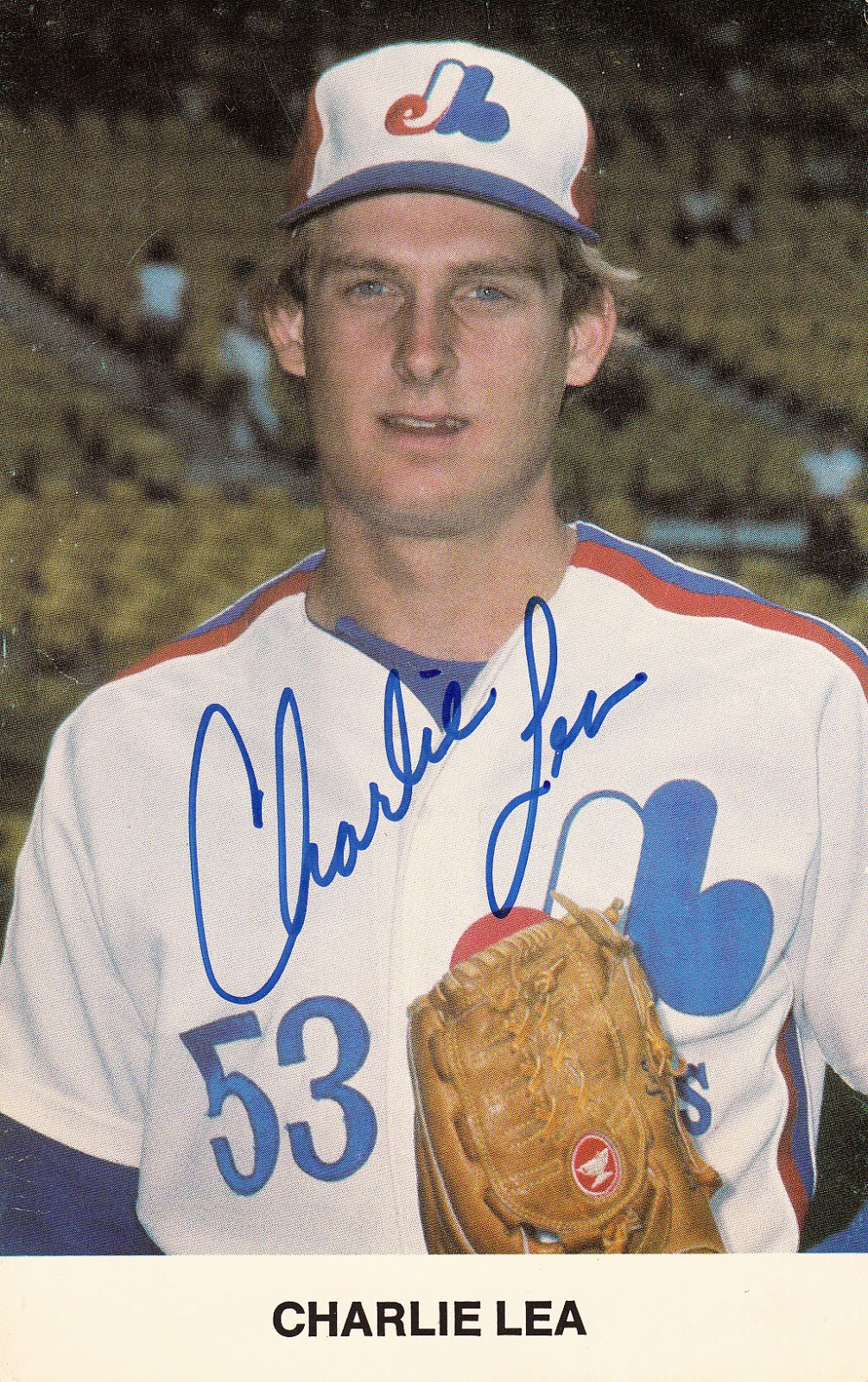 This one actually is from May of 2011.  I can date it exactly for a couple of reasons.  First, Mr. Lea passed away suddenly of a heart attack in December of 2011.  Second, his son -- whom I know through my job -- was kind enough to have his dad send me this photo card and a 1981 Topps card autographed to me...just because his son knew I really liked the old 1981 Topps card of Mr. Lea with the huge cheek full of tobacco. Mr. Lea had to be very proud of his son, because his son ended up as a law clerk for a United States Supreme Court Justice. 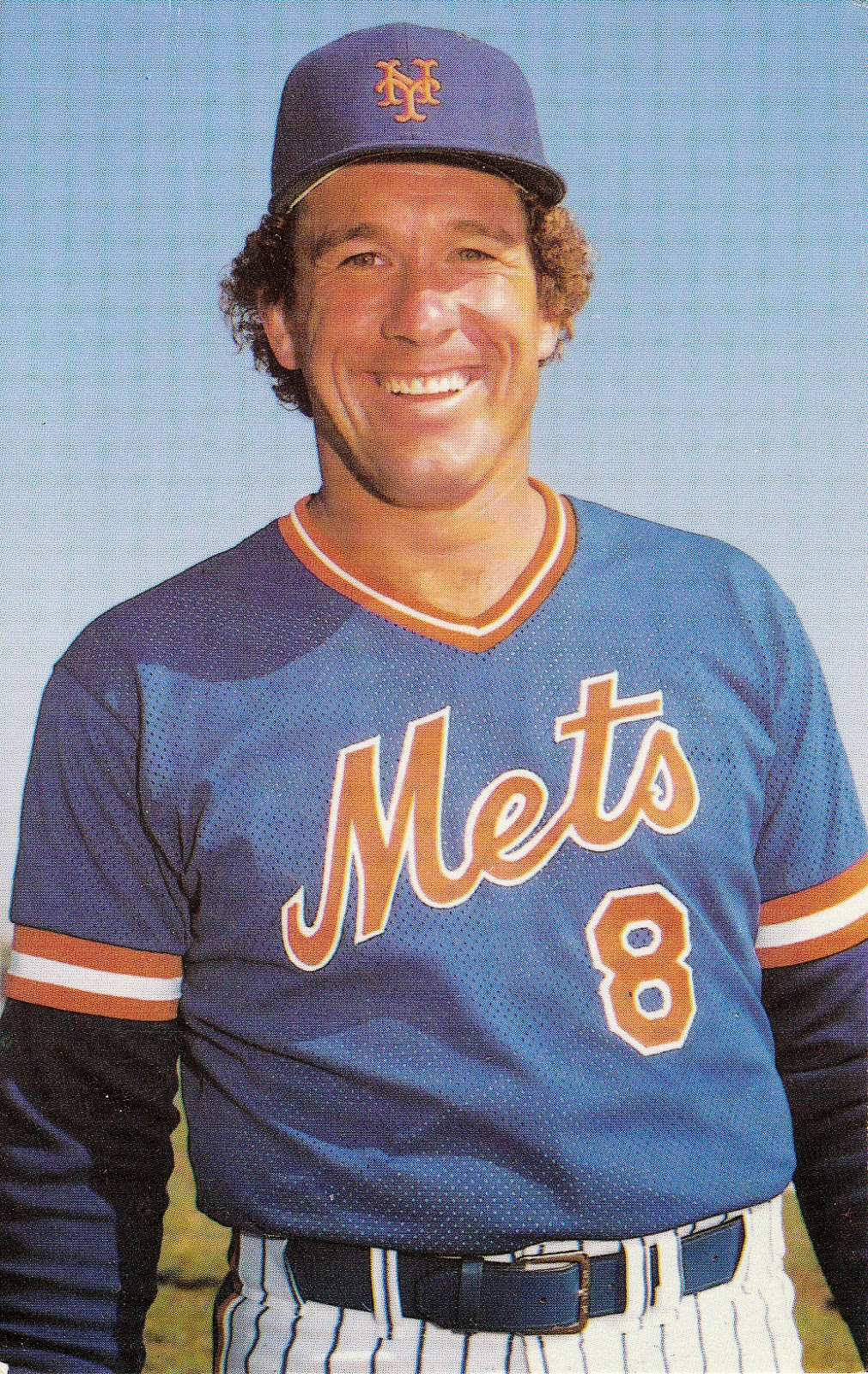 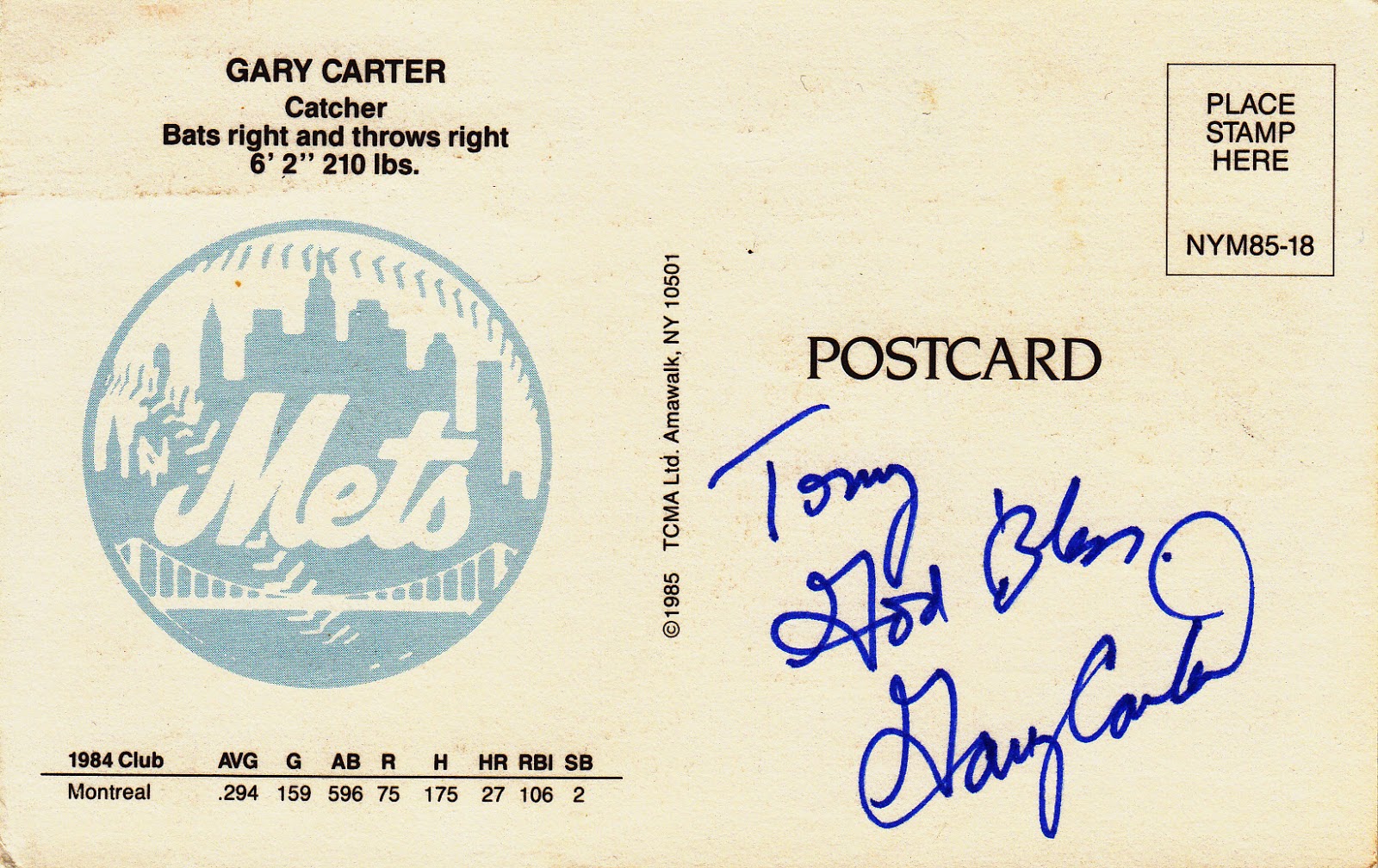 Another man who left this world way too early was the great Gary Carter.  Mr. Carter sent this postcard to me in 1985 -- probably in response to about my third or fourth envelope of stuff for him to sign.  At that time, he had stopped signing cards for free and asked for a donation for a cancer charity in honor of his sister (I believe).  I didn't have the cash to send him at age 14, but I did send him a letter expressing my condolences to him.  He sent me this postcard in response.  The world misses guys like Carter and Lea. 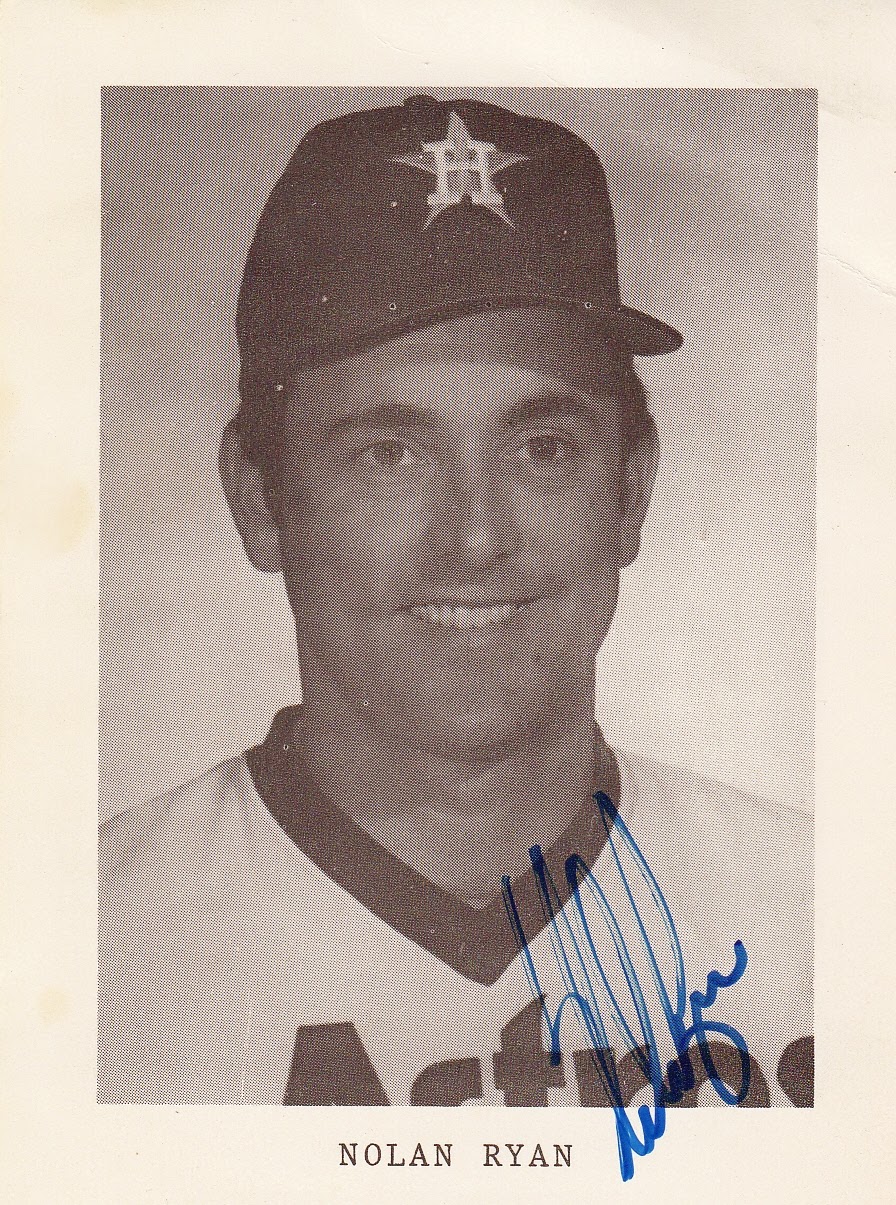 Then, there is the highlight of them all.  I couldn't swear an oath that this is a real Nolan Ryan autograph, but it does compare favorably to ones I have seen online.  He didn't sign any of my cards, but it does look like he was kind enough to sign a ton of photos for the Astros so they could respond to his fan mail with something nice.  If you did sign this, Mr. Ryan, I thank you.
Posted by Tony L. at 7:03 PM