As I got more into my collecting, I started to realize what a daunting task it is to try to collect "all" of a players cards.  Back in the 1980s, Baseball Cards Magazine would run features that ostensibly were complete checklists of all the cards printed for a particular player.  In those days, it seemed simple to be a "player collector" since it seemed like you were chasing base set cards, maybe some all-star subset, maybe some multi-player cards, a couple of regional issues, and voila! FIN!

I realize now, of course, that it wasn't even that easy back then.  We have much more information now about what regional issues were available.  Also, even in the 1950s, Topps was issuing at least a couple of different oddball sets a year to leverage its licensing rights and squeeze more pennies and nickels out of the youth of America.

The 1980s, as everyone knows, was the pinnacle of both the junk wax era, but also of the random retailer-supplied sets.  Everything from what seemed to be countless 44-card sets from Fleer with different titles and featuring nearly the same set of players in alphabetical order -- meaning that Robin Yount has a bunch of #44 cards in those sets -- to the Topps-issued Gardner's Bakery Milwaukee Brewers sets (increasing my love of white bread carbs by 800%) to the MSA Discs that popped up from time to time.

Topps started its Tiffany set in the 1980s, along with issuing an exact parallel set with the Nestle logo on it in 1984.  And that was when the parallel set craze really started, as far as I can tell.

By 9 years later, Topps was issuing its base set in at least 5 complete parallels and one partial parallel. I bring this up in part to show off some eBay victories, but also because the proliferation of parallels has become more and more intriguing the more I read and learn about them. 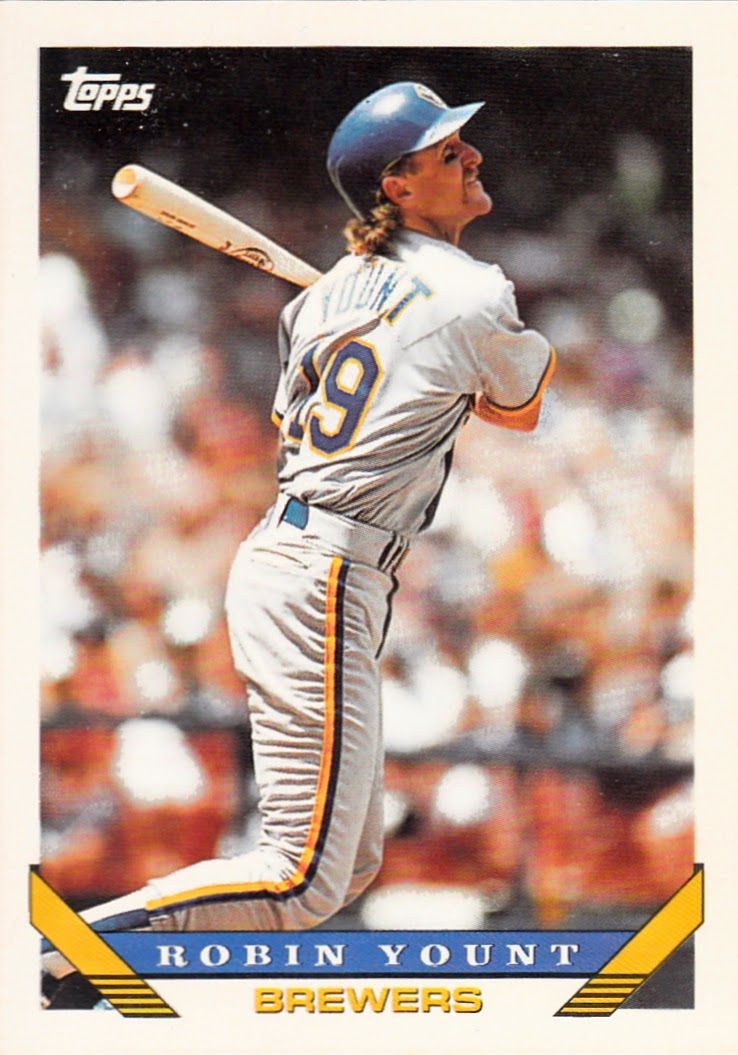 1993 was the second year that Topps printed its base set on bright, white card stock -- unlike years past with the brown/gray cardboard used for literally decades.  This is an attractive card of Robin Yount completing his swing and hitting what appears to be a fly ball or popup.

Next, Topps had its "ToppsGold."  Again, 1992 was a watershed year of being the first year for the Gold Inserts (and the Gold Winners Inserts), and 1993 continued that trend. 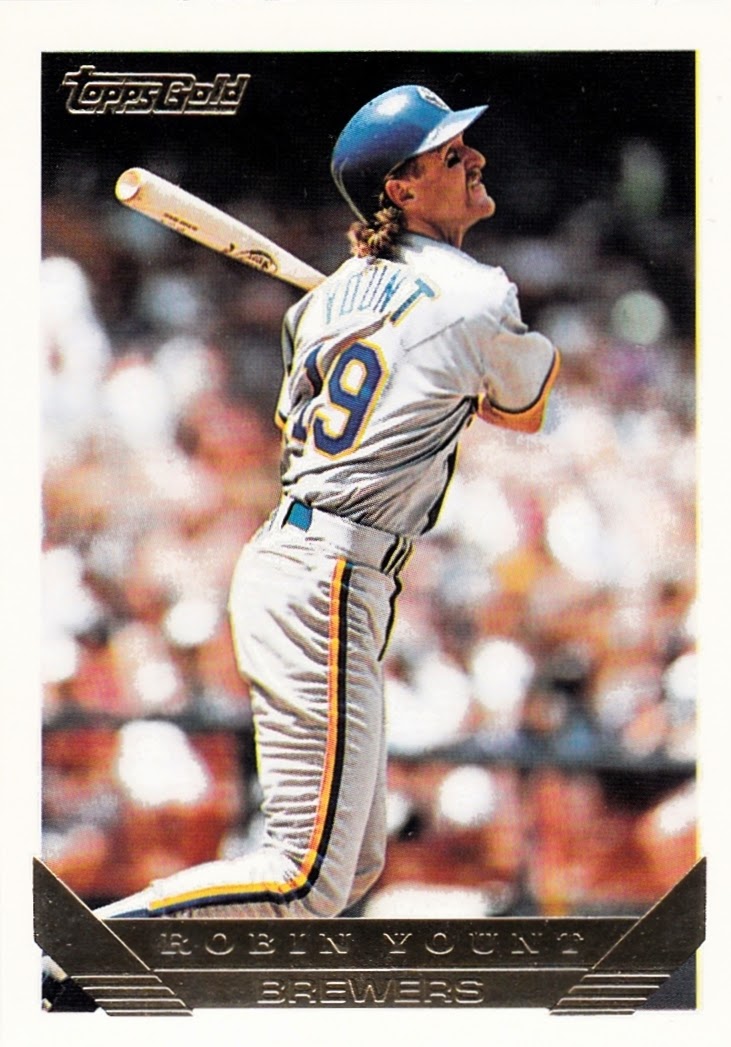 Again, an attractive card, but less so than the base set because the imprint for Yount's name is not deep enough to make his name and team easy to read.

In addition, Topps pulled its "Micro Card" gimmick in 1993.  Here's the base Micro card, next to its Gold big brother to show scale: 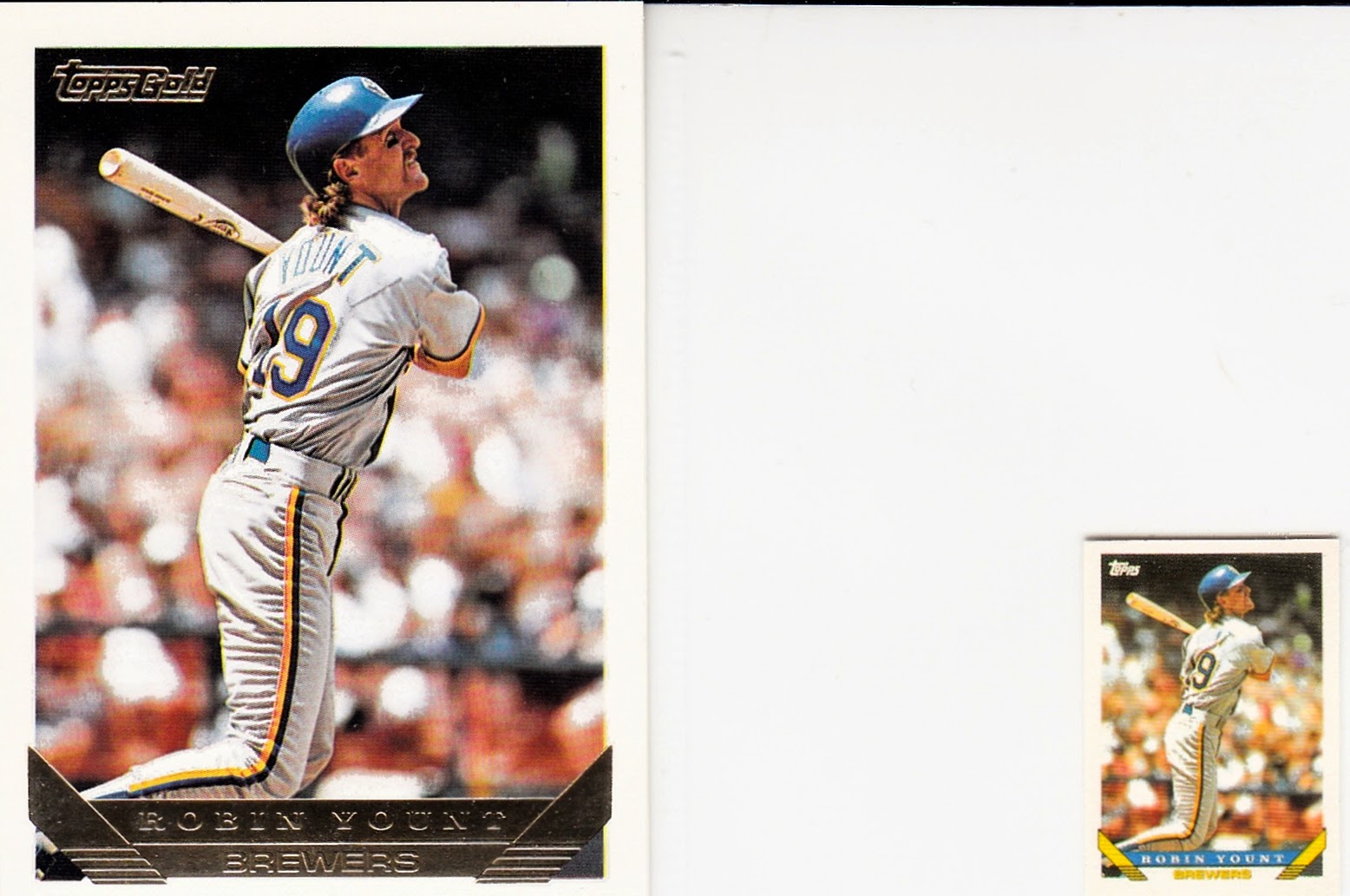 Now, the micro card is as attractive a card as the base set is, so long as you don't need glasses.  I mean, the stats on the back are nearly impossible to read without a magnifying glass.

I believe that 1993 was the year that Topps started figuring out the super sparkly diamond-like printing process.  Perhaps wisely, they used the Micro-sized card as their guinea pig, and even then only used the process for a limited number of cards.  Here's the Yount sparkly micro: 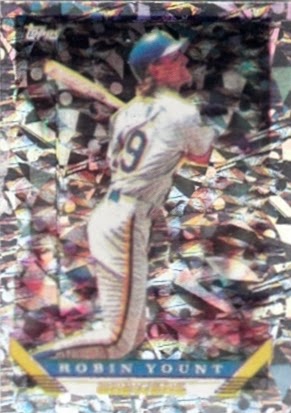 You can tell by the distortion and lack of focus how small that card is.

1993 was also a special year for baseball, as two new expansion teams -- the first in 16 years -- joined the National League.  Topps was up to the task and honored both teams with a special base set of all 792 Topps cards with a gold embossed logo.  And, that's the reason for my post -- I just got the entire Brewers team set (except for manager Phil Garner and the 4-way rookie card featuring Matt Mieske) of the Rockies commemorative set as well as just the Yount from the Marlins commemorative set off eBay for a total of less than $20.

Here's the Rockies commemorative card, and the gold-leaf logo: 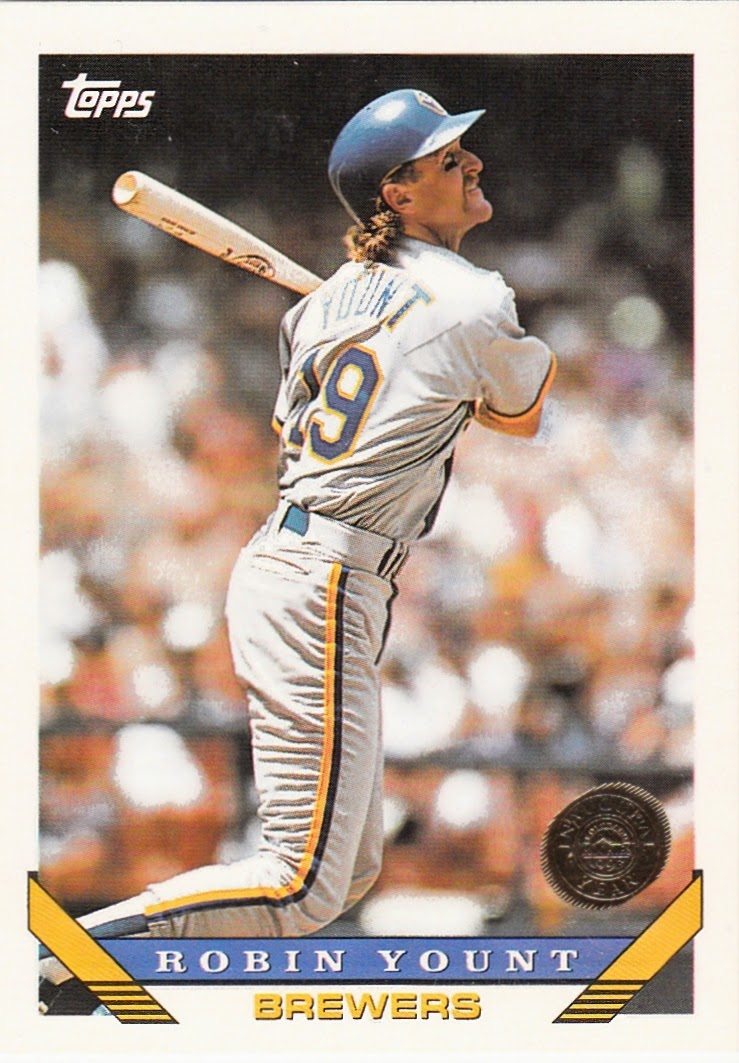 And here's the Marlins card and its gold leaf logo: 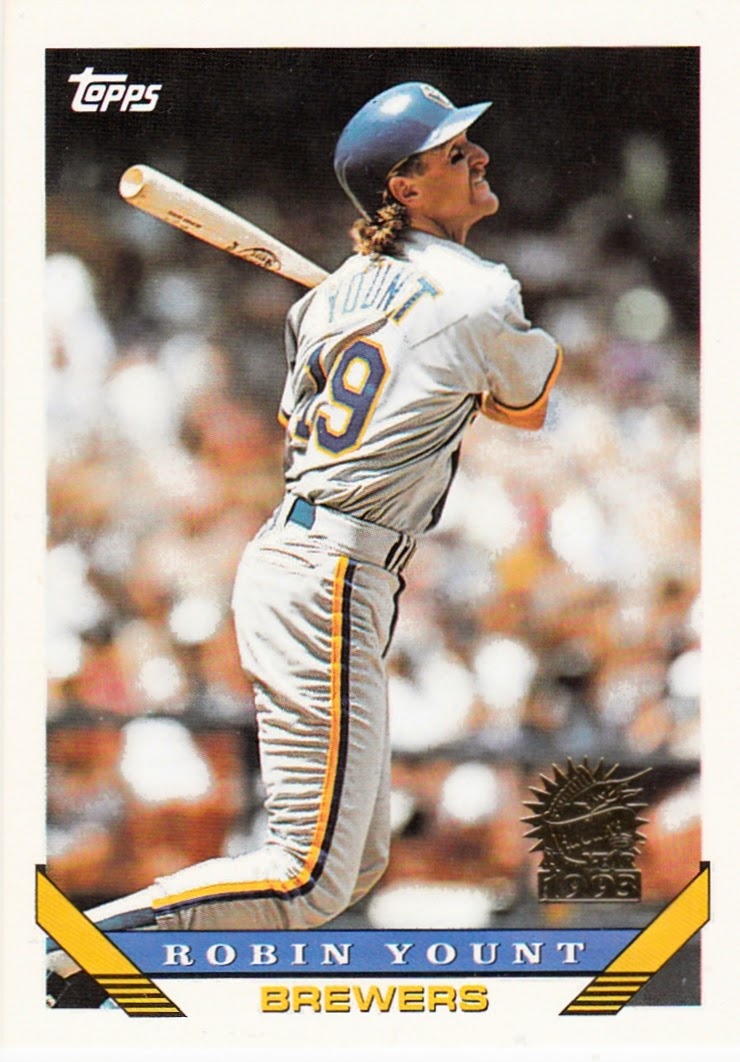 I'm glad I've got these for completeness, but it is a frustrating chase sometimes.  This will be especially true for those of you/us trying to get complete parallel sets for the 2014 Topps.  Camo, Pink, Red, Blue, Purple, Black, Gold, Yellow, Green, Platinum, Printing Plates, Opening Day, Chrome, short print variations -- I'm hoping Topps isn't pure evil and prints parallels for those too -- just a crazy, mystifying combination.