Repacks R Us, Part II: Finishing up the Loose Packs and hitting the oldest Packs

Yesterday's post introduced you to my purchase of the Toys 'R' Us repack, so let's get through some more of that box.  There's a lot of work to be done here to make up for the Goodwin Champions pack -- I like dogs, too, but I don't like Kasey Keller's yappy dog...and that was the best card in that pack.  Ugh.  So, did the box get better?  Let's see.


2012 Panini Triple Play
I have said in the past after opening one of these packs that I am not a huge fan of these cartoon cards.  If anyone wants one of these, I’ll happily send it to you. 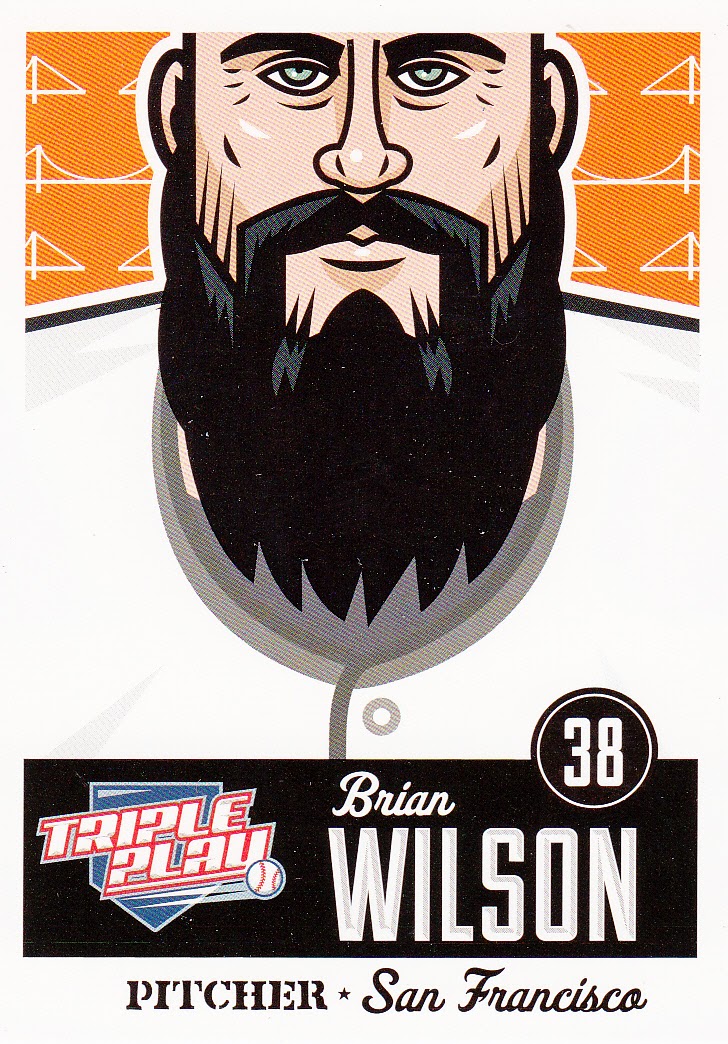 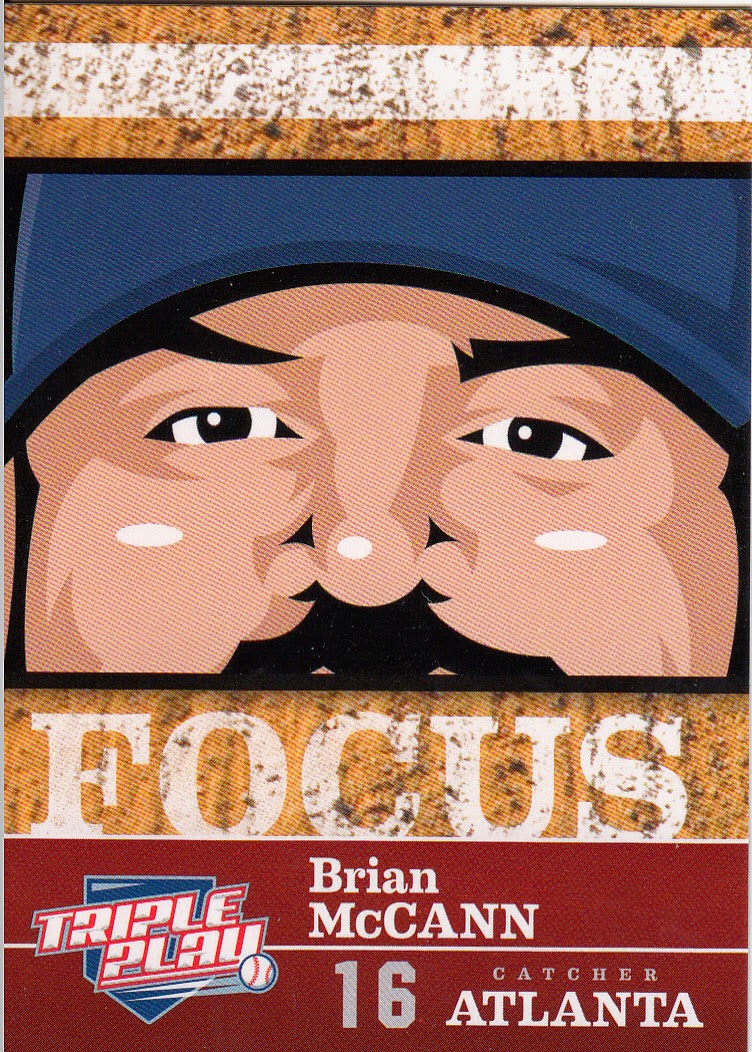 This looks more like a fat truck driver looking in his rearview mirror than it bears any resemblance to Brian McCann. 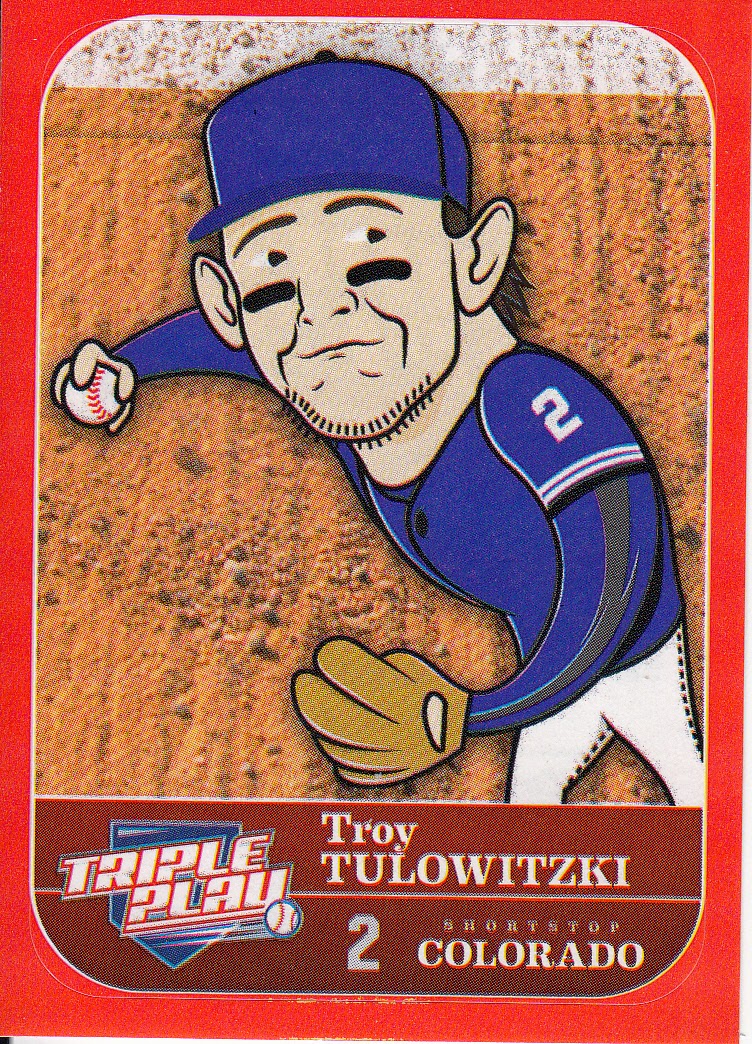 The less said about that set, the better.

Within the repack, MJ Holding put in several "jumbo" packs or rack packs.  Let's get all the unlicensed cards out of the way and knock out the Upper Deck Series 1 Jumbo Packs.  It's nice to see that these Upper Deck cards are still using logos, but being rebels and openly labeling itself as NOT authorized by MLB was definitely a bad idea.  But, it did provide work for some lawyers for a while. 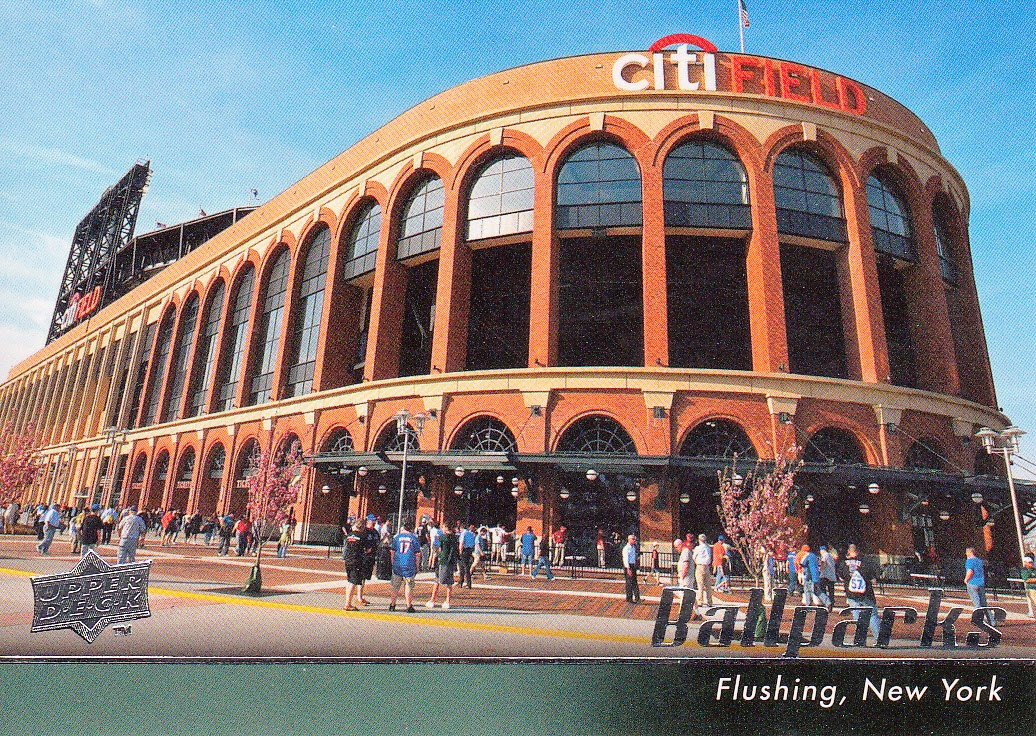 So wait -- Upper Deck thought it was okay to use the logos from the teams without their permission, but they didn't feel okay about calling the stadium "CitiField"? 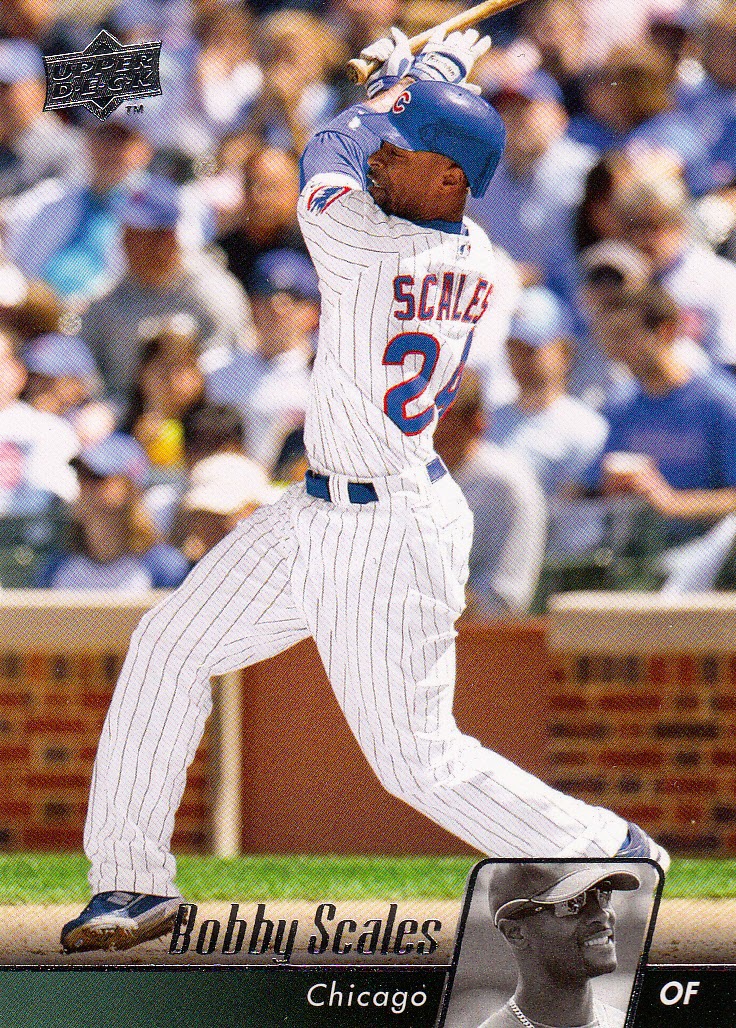 It’s a Cubs Hot Pack. Yippee.  In all seriousness, if Scales had come up in the 1970s, he may never have featured on a baseball card.  Since he came up in the parallel issuing, chrome-loving days, he has sixty-five entries on the Trading Card Database. 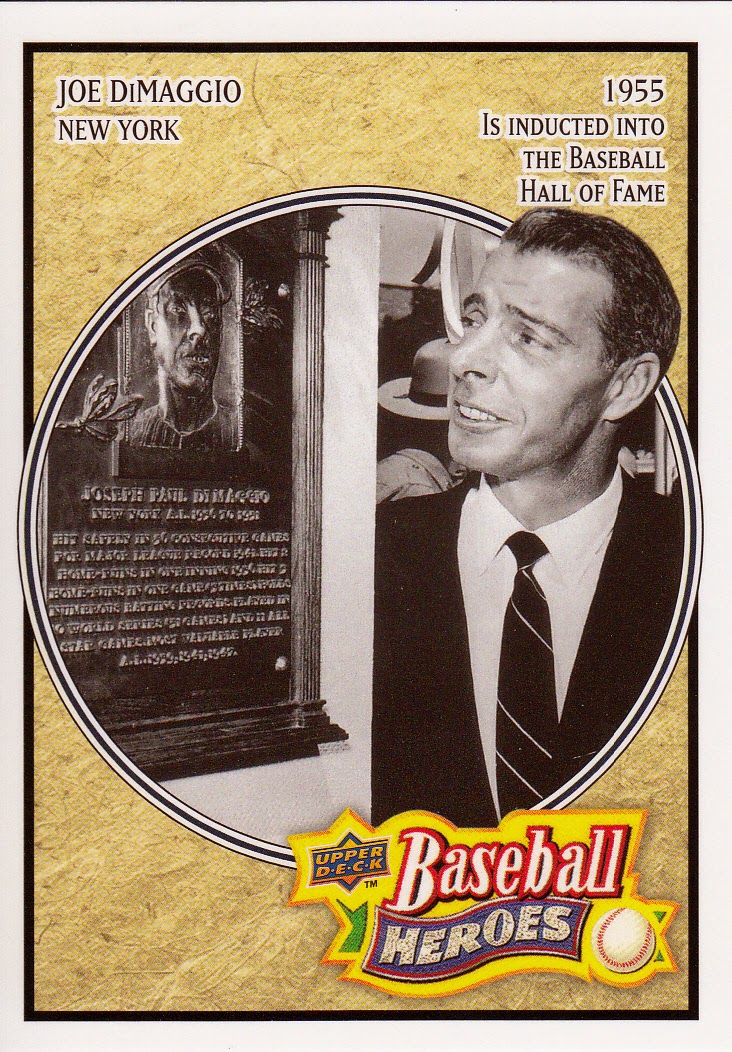 I like this card and the Baseball Heroes cards generally.  I just wish I could figure out when each of them was issued.  Like so many things Upper Deck did while it produced baseball cards, they really beat this one into the ground. 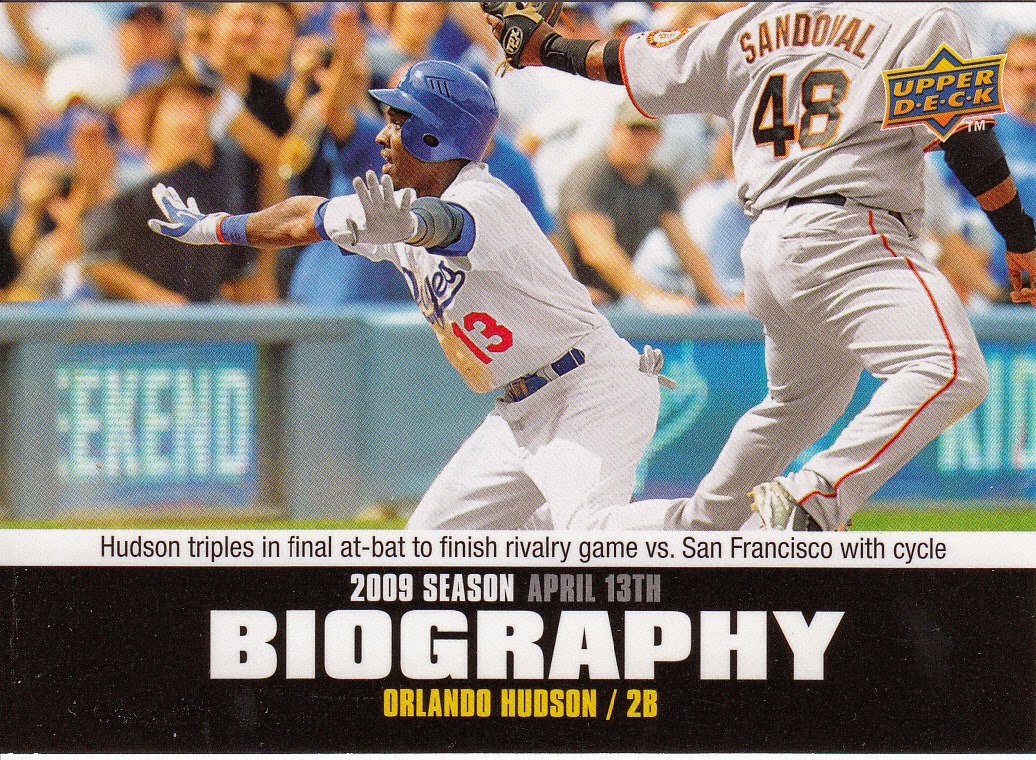 I am not a fan of these “season biography” cards.  Seems like just an excuse to produce far too many cards in one year.  This is a nice looking card though. 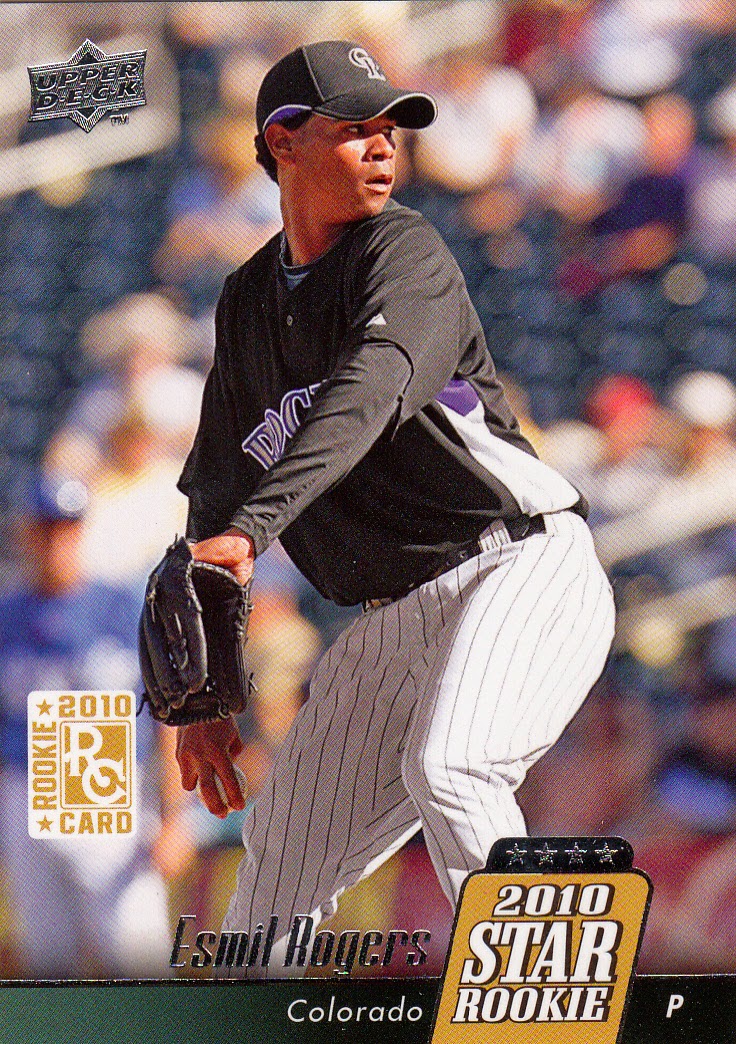 Star Rookie!  I remember when people thought that might happen for him too.  Instead, through 2 appearances in 2014 and with 5 big league seasons behind him, he's sporting a career ERA of 5.53. 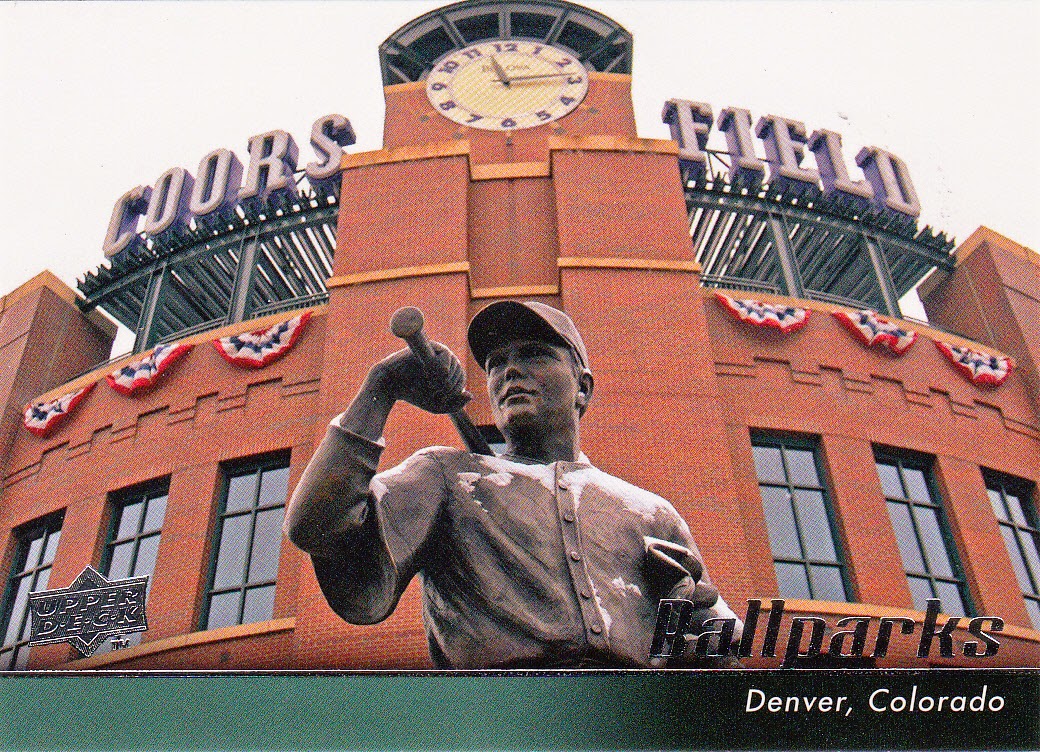 Nice clock at the "Ballpark" in "Denver, Colorado." 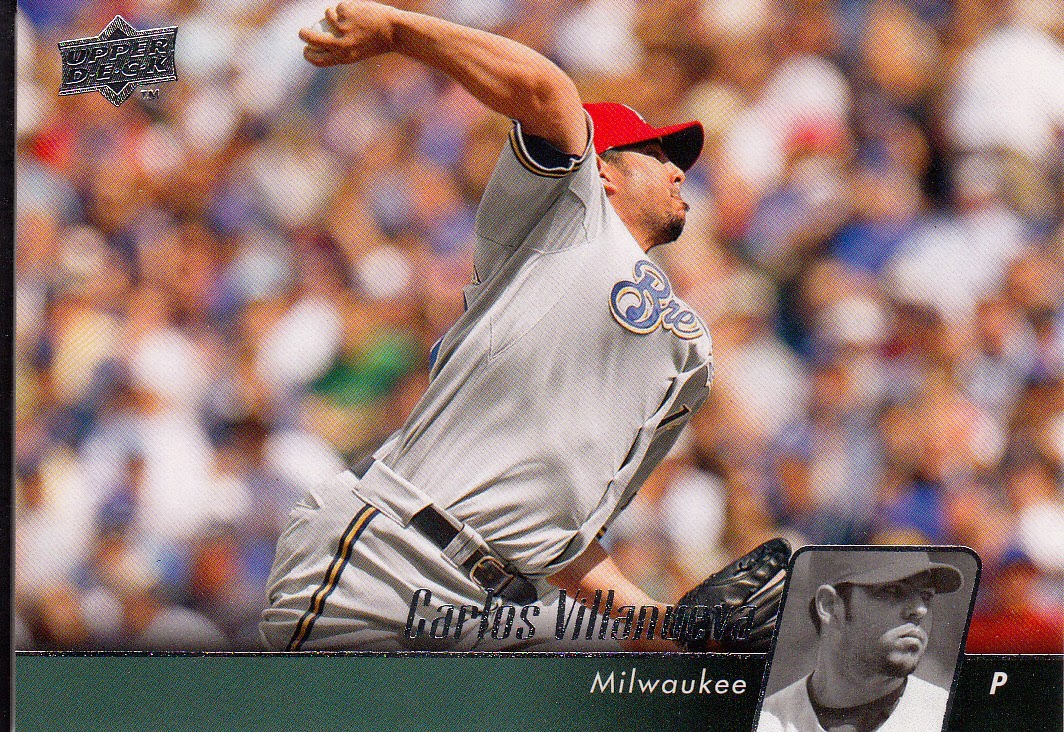 My first Brewer of the entire repack.  And he’s wearing a red hat for "Italian Heritage Day." 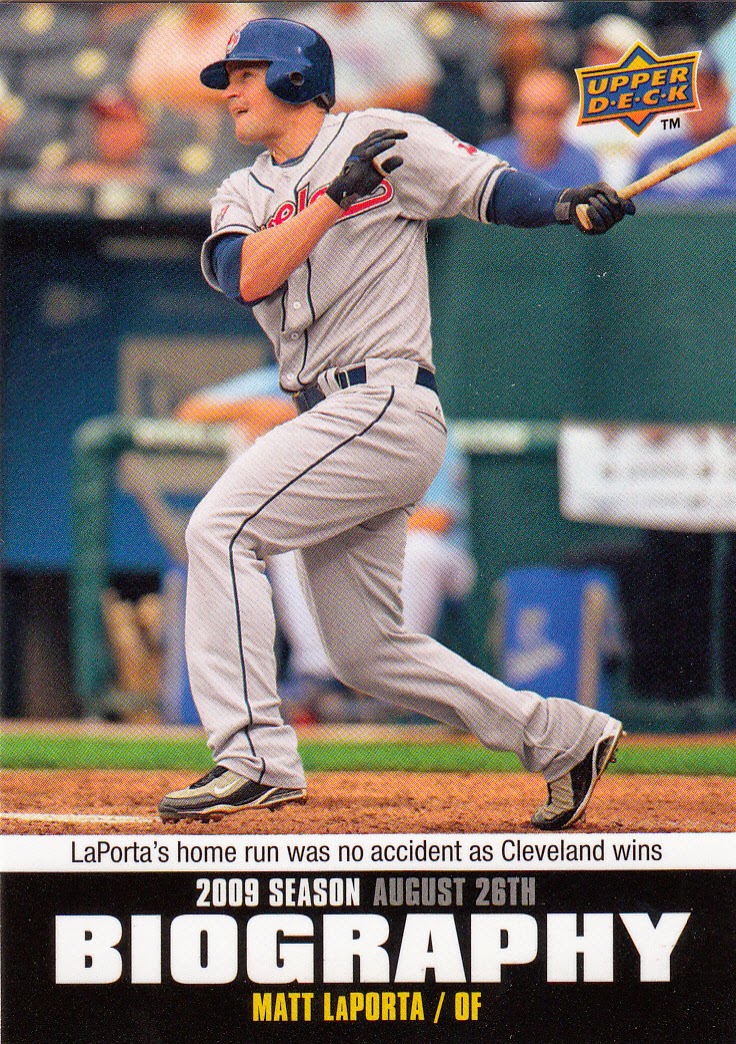 Was that when the Indians still had hope that LaPorta would be more than a replacement level player?  That didn't work out too well.  Let's hope that he knows how to speak Spanish already so that he can enjoy his time this season with Campeche in the Mexican League 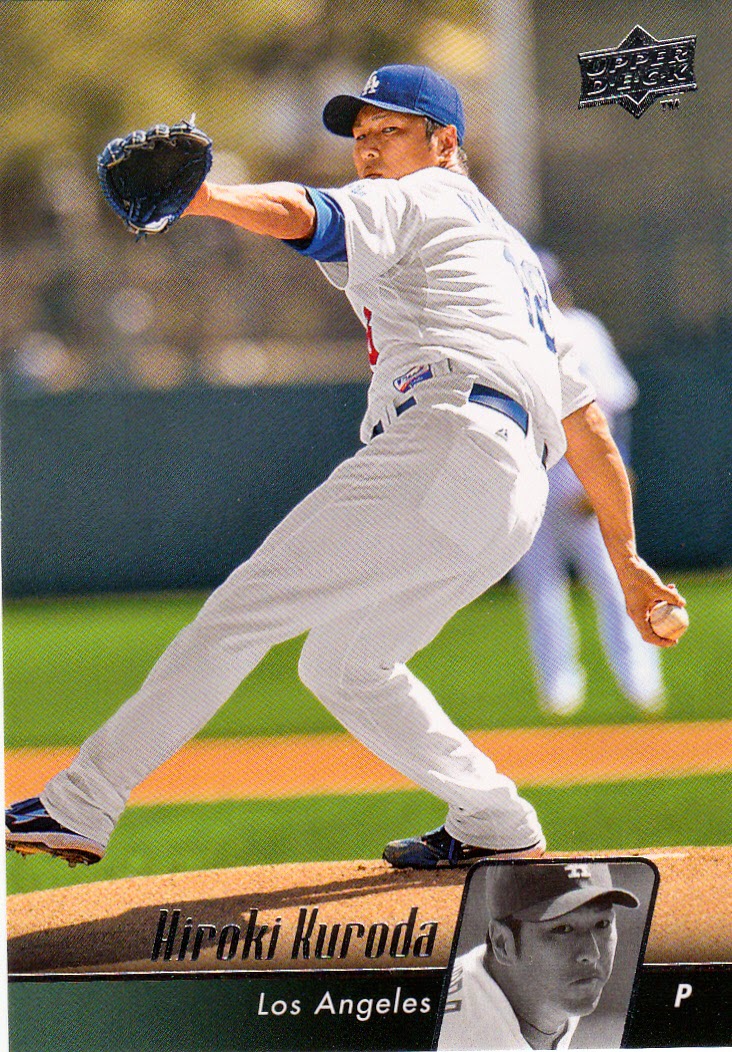 This guy was always my under-the-radar fantasy pick in my NL-only leagues.  He’d give you 175-200 great innings at a low WHIP and ERA.  Then he had to go and sign with the Yankees. 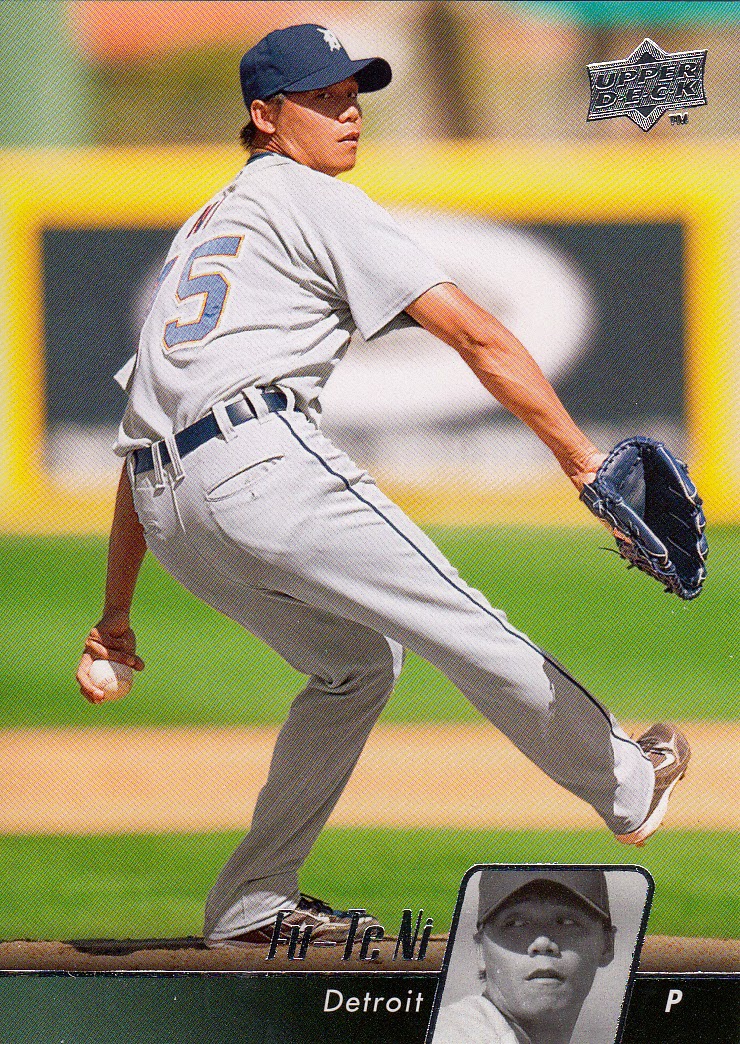 Strangely, Microsoft Word thinks Ni is a word, or at least that it is spelled correctly, and Monty Python agrees.  Words with Friends does not. 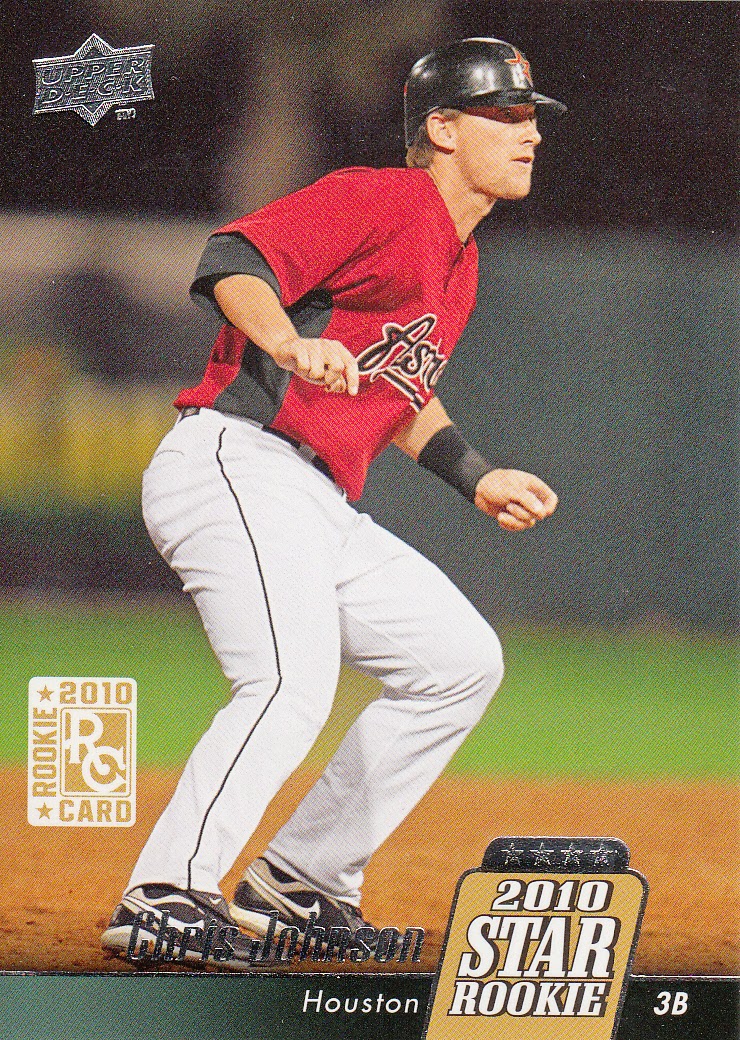 It's not that these cards are ugly.  To the contrary, it is pretty much the type of set we had come to expect from UD – quality photography with a lot of full bleed fronts, a quality finish on the cards, and not too cluttered in terms of its look.  Frustrating set inserts like the “season biography” and the neverending run of Baseball Heroes make me glad that Upper Deck did not win the exclusivity battle, but these cards are nicer than what Topps has put out.

Now, on to the packs from Topps: 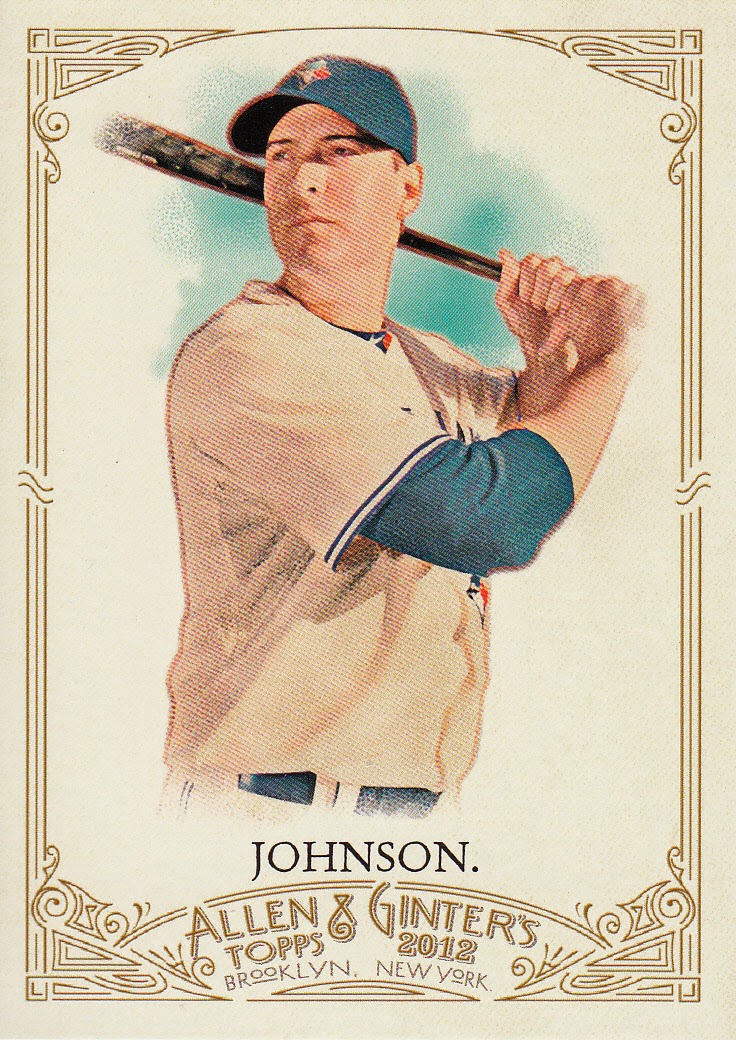 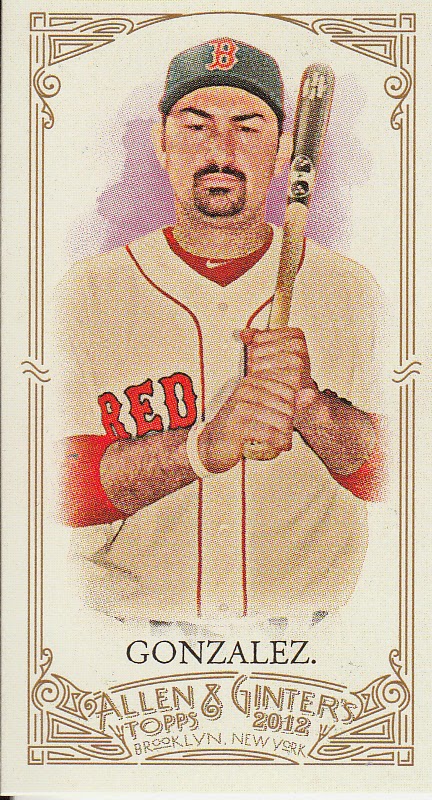 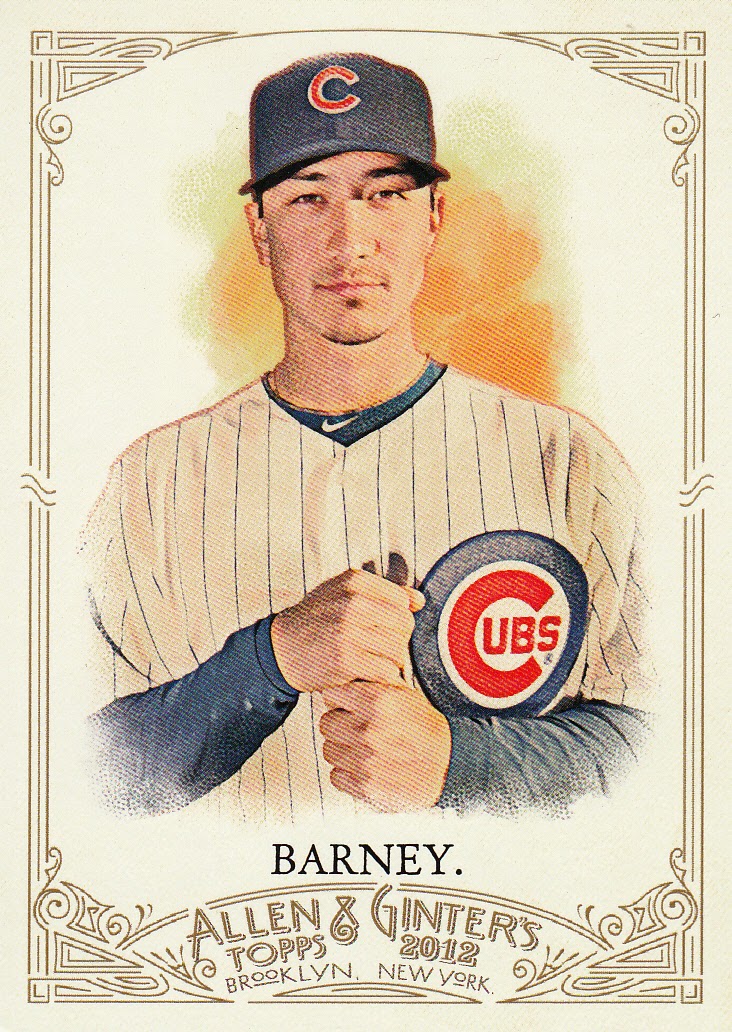 I think this repack missed its intended destination of Naperville, Illinois.  There are too many Cubs for that not to be the case.  Perhaps an MJ Holdings employee put it together for herself but it got packed into a truck for Georgia accidentally.

2012 Topps Series 1 8-card pack
The next two packs are probably most certainly the least interesting packs in the entire repack box.  Just run-of-the-mill regular series 2012 Topps packs.  Perhaps they will surprise me. 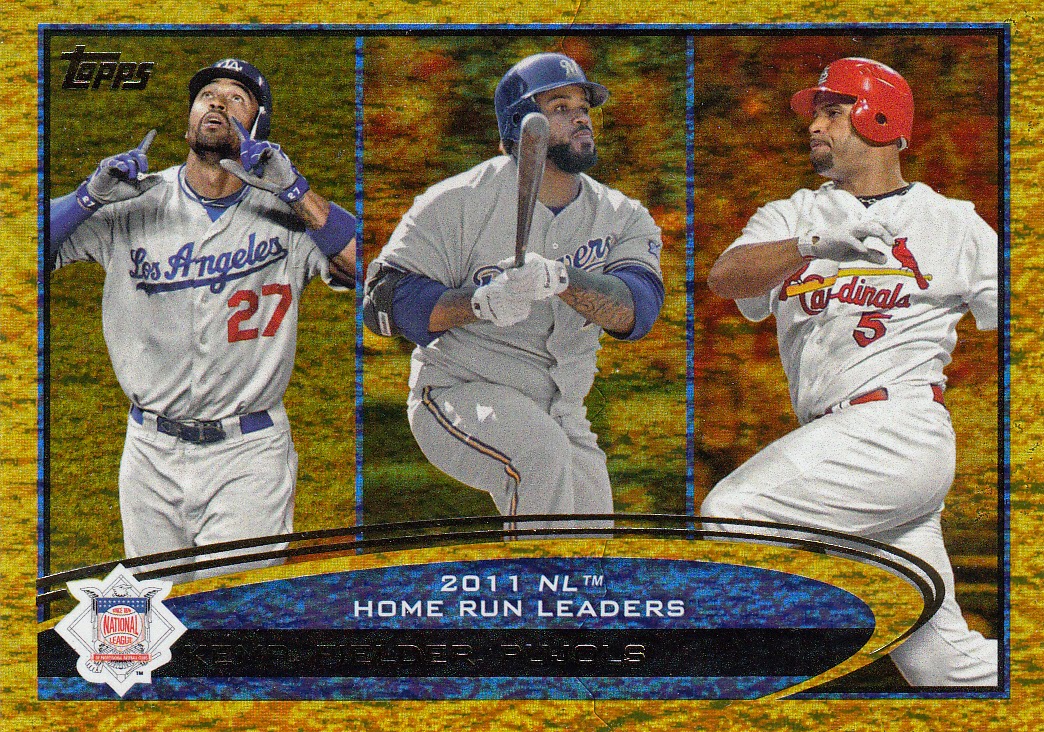 Finally another card to add to one of my personal collections.  I cannot complain about getting this one to add to the Prince Fielder Brewer collection, even if the round mound of vegan is only 1/3 of the card.

I think it says it all that that pack closed with back-to-back Miami Marlins. While the liquor sparkle Fielder was not a bad card, it's all that pack had for me. 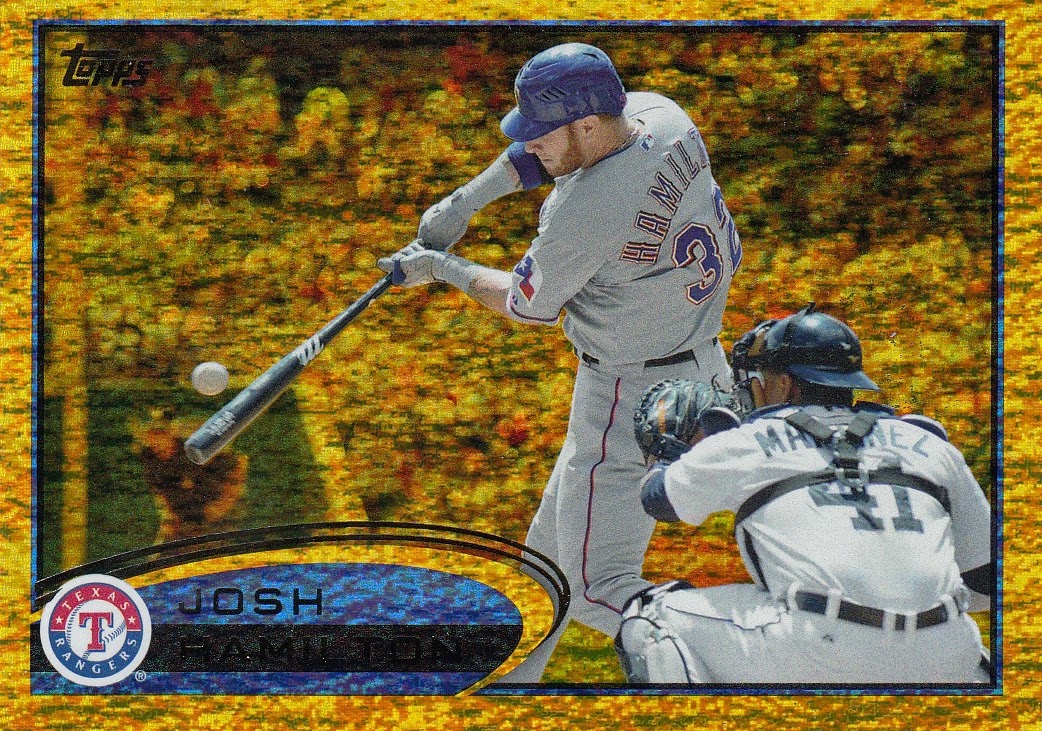 Liquor in the front, sparkle in the back.  Or something like that. 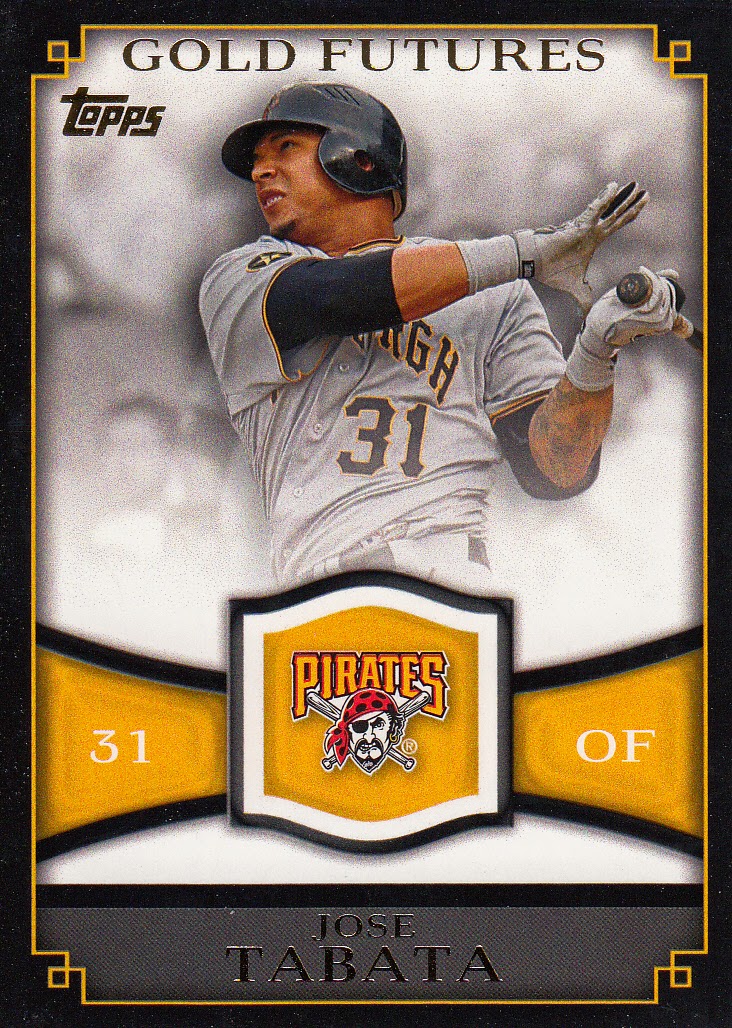 That hasn’t worked out too well so far, has it?  Pirates fans -- what is Tabata's deal?

I had reasonably low expectations for these 2012 Topps packs, and they really lived up to those expectations.

2012 Bowman Chrome
The last of the loose packs in the repack was this three-card Bowman Chrome pack.  I like shiny things as much as the next collector, so let's see what we get: 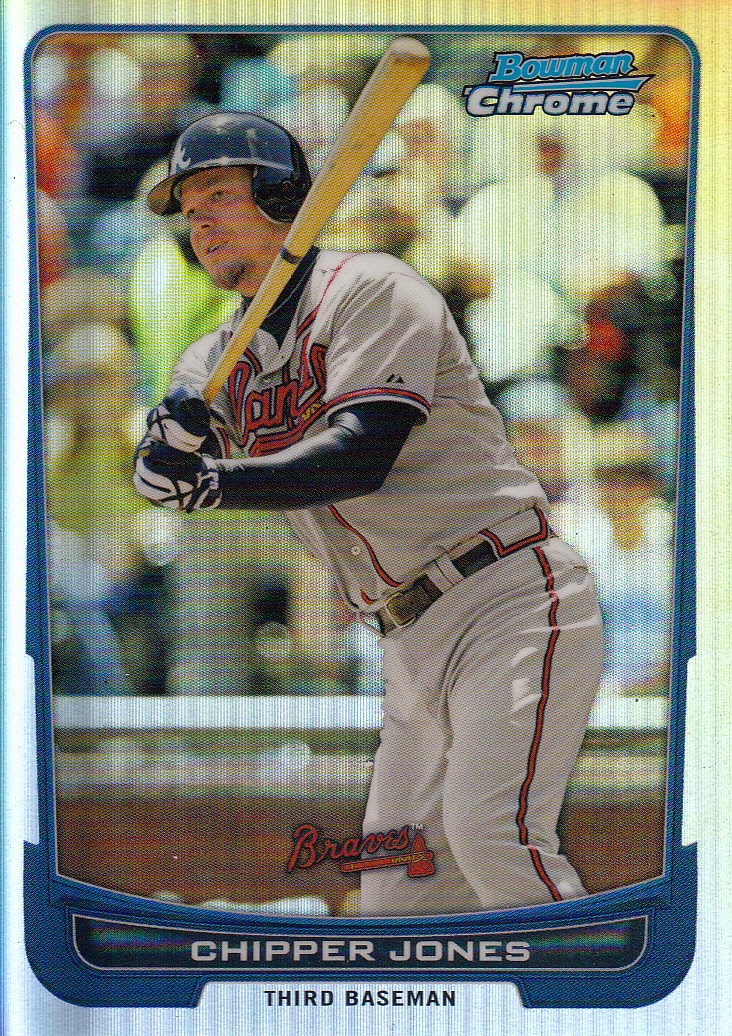 A really attractive card with all that silver shining up at you.  A must have for any Braves fan's collection.  Do any Braves fans out there want it? 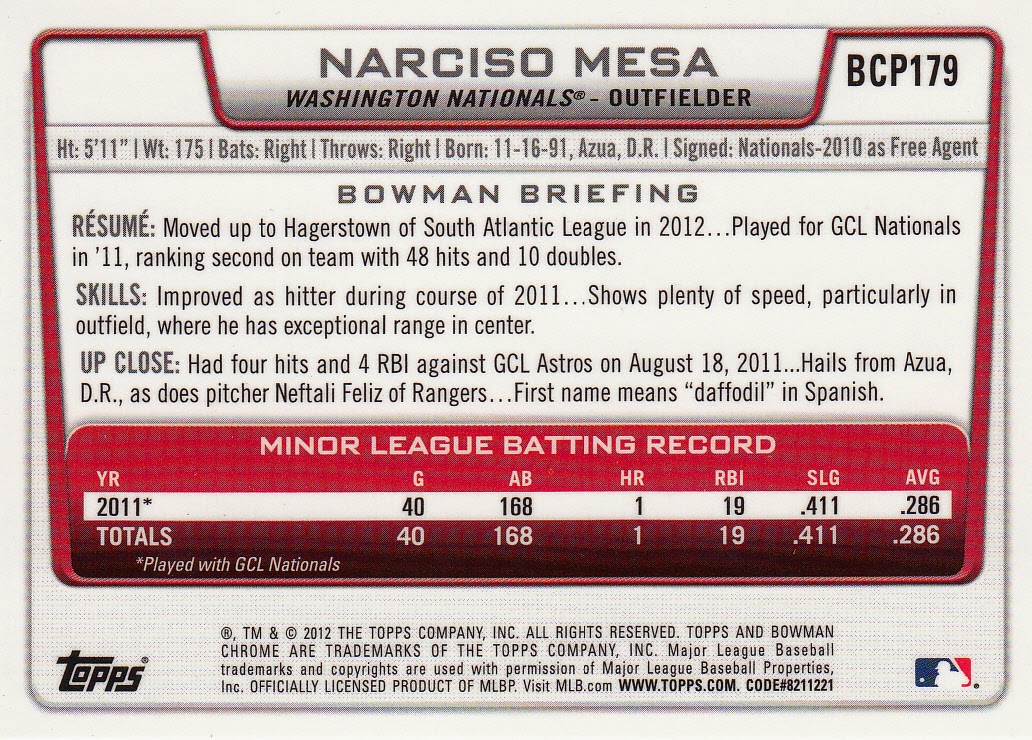 His first name means daffodil in Spanish.  That’s what the card says. 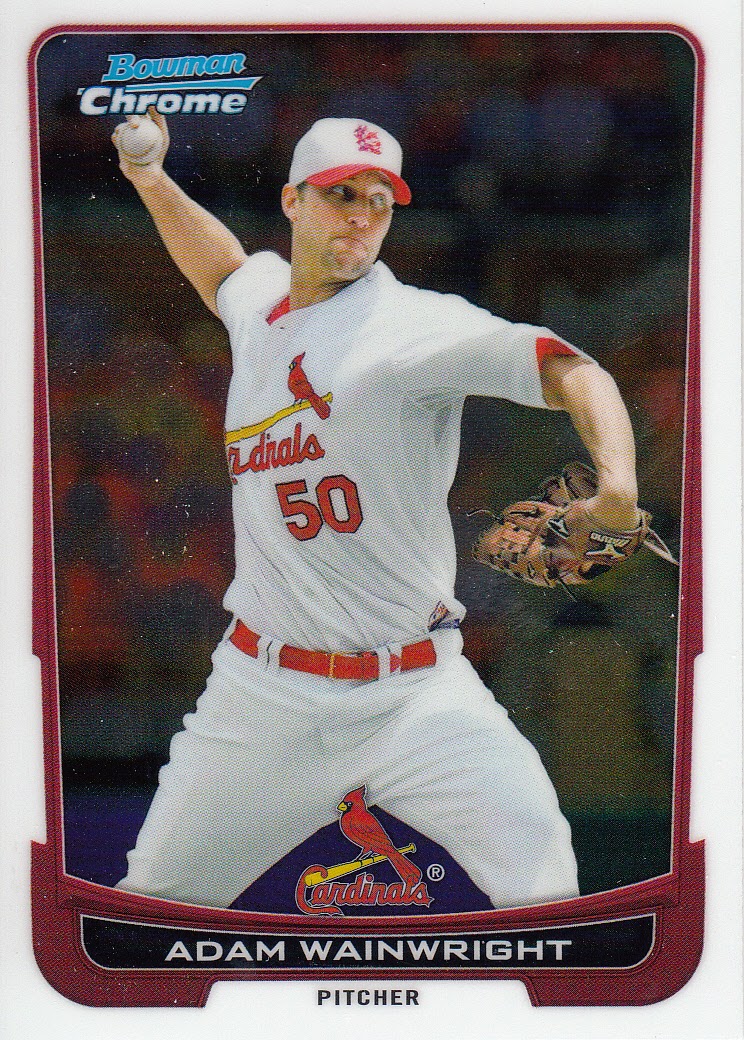 His first name means daffodil in Urdu.  That’s what the card says.

At the end of Day 2, we are still looking like this repack is limping along.  Two total Brewers -- one of which was only a third of a gold sparkle card -- out of all of these cards is not helping my assessment.  I guess Brewers are just too good for the repacks.

Seriously though, this has not be a terrible group of cards, but it has been less than inspiring.  What's left to save this repack?  We have two "jumbo" packs of 2013 Topps Series 1 -- I'd call them rack packs, but I guess that did not sound fancy enough for Topps -- and we have two of the 2011 Bowman Chrome three-packs with a bonus insert pack of all Purple Refractors.  There's still hope, I suppose!
Posted by Tony L. at 7:00 PM