Trade with Alex of Chavez Ravining

Because I am so far behind on trade posts, Memorabilia Monday will return next week.

Earlier today, Alex from the excellent blog Chavez Ravining posted about the 2014 Turkey Reds that I sent to him late last month.  His post was highly apologetic about his not having sent out cards to me yet.  I am glad to report to him that he was incorrect -- at least I certainly believe he was (and please, if I am wrong, do not take it personally if you were the person who sent these cards and not Alex!).

Then again, I fell so far behind on trade posts that I had to start making folders on my computer to store the scans of the cards I've gotten from people.  There are so many incredible, sharing people in the online baseball card collecting community, and this blog has introduced me to a few of them.  I just hope that I am, in fact, noting correctly who sent me what.

At any rate, now that Alex isn't sure whether he sent me these cards or not, I'm starting to doubt whether my sorting system on my computer is correct.  I sure hope that it is, because otherwise Alex is getting credit for one excellent group of cards: 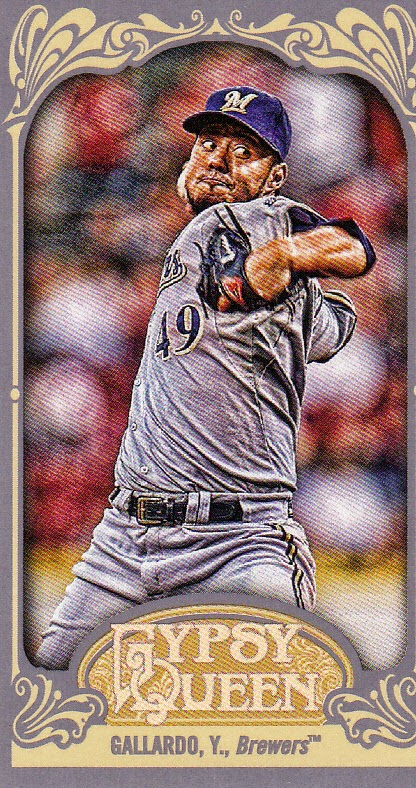 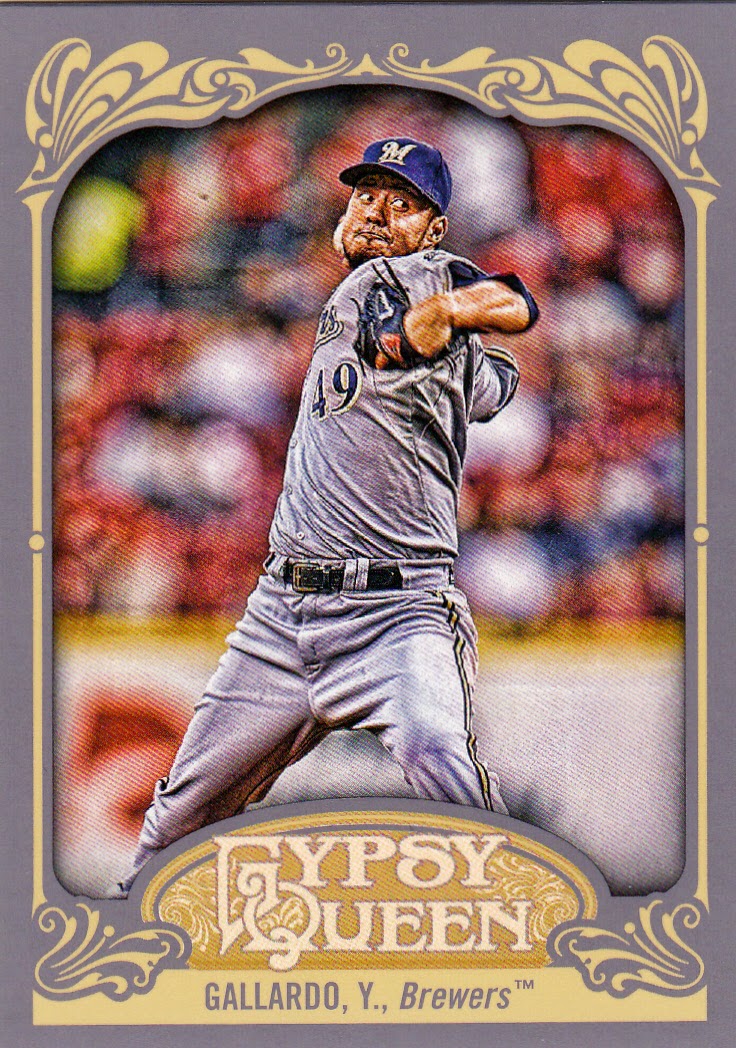 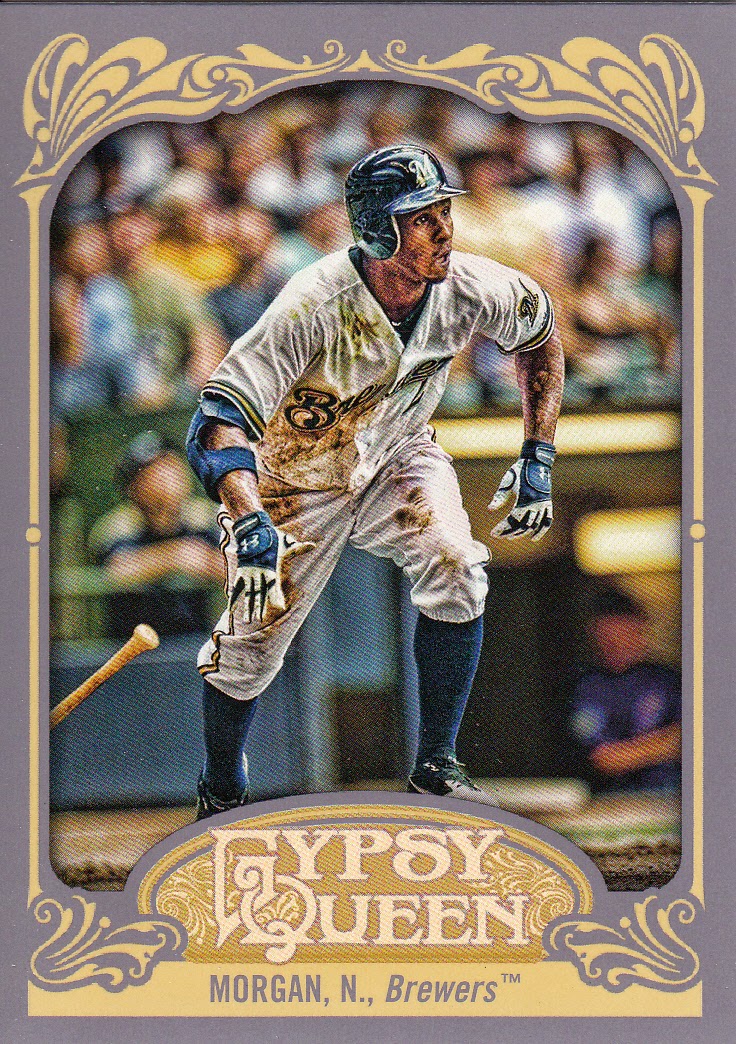 Let's start with the Gypsy Queen.  I didn't have any of these cards -- especially the excellent Paul Molitor, with the big dirt streak down the front of his jersey -- so I was excited to get these.  I'm on the fence about these cards at this point.  On the one hand, they are a nice change from the Allen & Ginter, but, at the same time, how many different throwback cigarette-card designs do we really need?  I will still collect the Brewers and my player collections from these sets, but probably not much more than that.

Next, let's go for the no-logos-allowed cards: 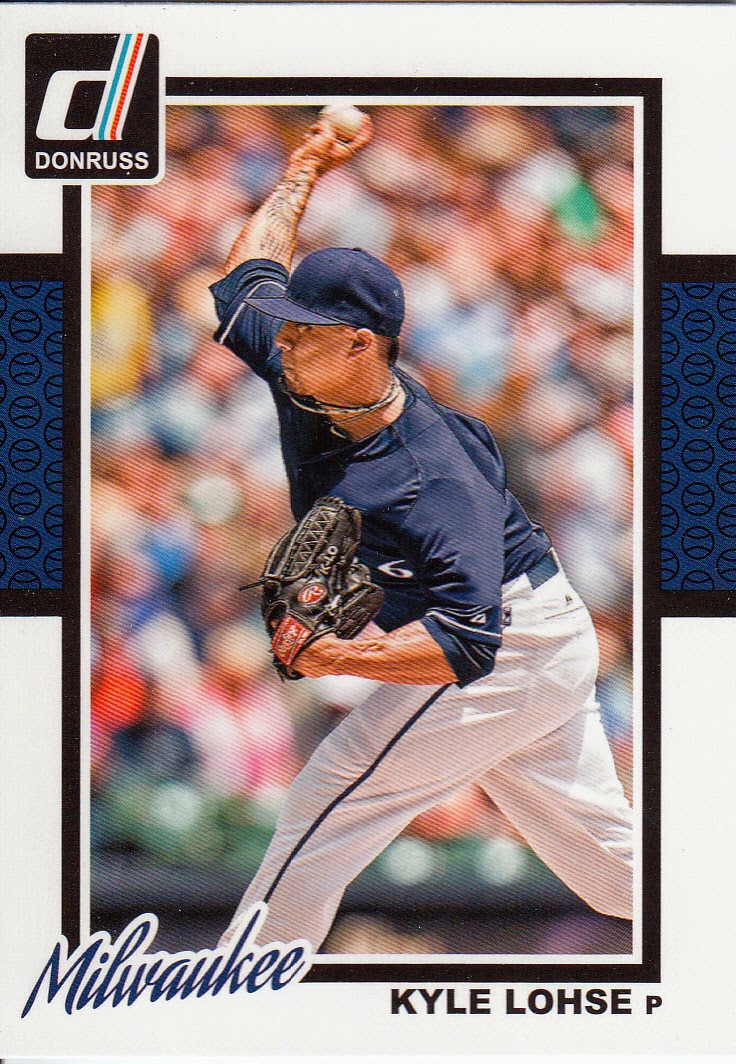 Alex was kind enough to send two Seguras -- either by luck or by the recognition that a person who collects both the team and the player needs two of a card to call the job done on a set.  These are the only Donruss I own.  I'm okay with the blank hats when the card is coming with a loaf of bread.  To buy a pack of these in a store is a bridge too far for me.

Now, it's time to prospect: 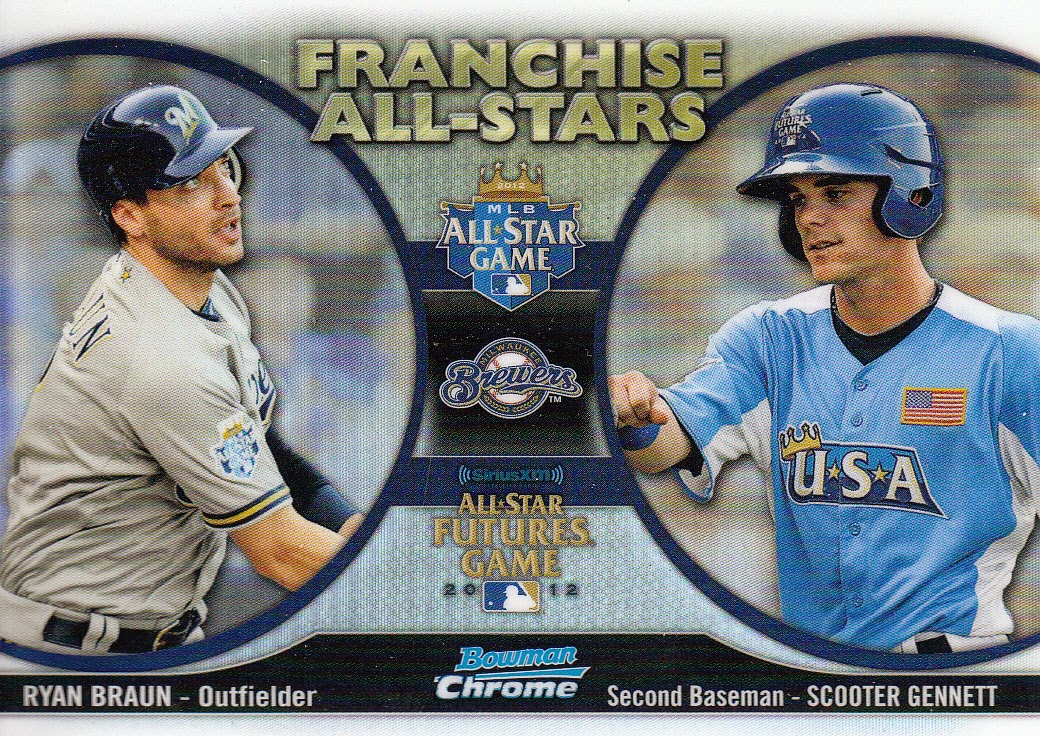 Ramirez was a 4th round pick in 2011 out of Cal State-Fullerton.  He's at AA Huntsville this year at the age of 24.  He really needs to come up King-Kong large to have a career in baseball at this point.

Tucker Neuhaus was a 2013 2nd round draft pick out of high school in Tampa whose injuries cost him being selected in the first round.  He spent last year in the Arizona Rookie league, and it seems pretty likely that he'll be in a short-season situation again this year after struggling a bit with the bat and the glove last year at both SS and 3B.

Taylor Jungmann was Milwaukee's 1st round pick in 2011 out of the University of Texas.  He's currently at Huntsville in AA repeating the level from last year -- he needs to work on control, certainly, but he does strike some guys out.  Another guy who needs a step forward this year.

Finally, Nelson was a 2nd round pick in 2010 out of the University of Alabama.  He made a brief 10 inning cameo last season in Milwaukee, and is pitching currently at AAA Nashville.  He's a big strikeout pitcher whose control can desert him at times, so the hope is that he will prove that he deserves the call up to Milwaukee through his results in Nashville.  Lord knows that the Milwaukee bullpen is pretty thin.

And wow, I just geeked out and went down the prospect primrose path.

There were a number of other great cards in the packet as well -- a bunch of the red Target cards and some Topps base set that I needed.  Let me close with the cool inserts and liquor-foils: 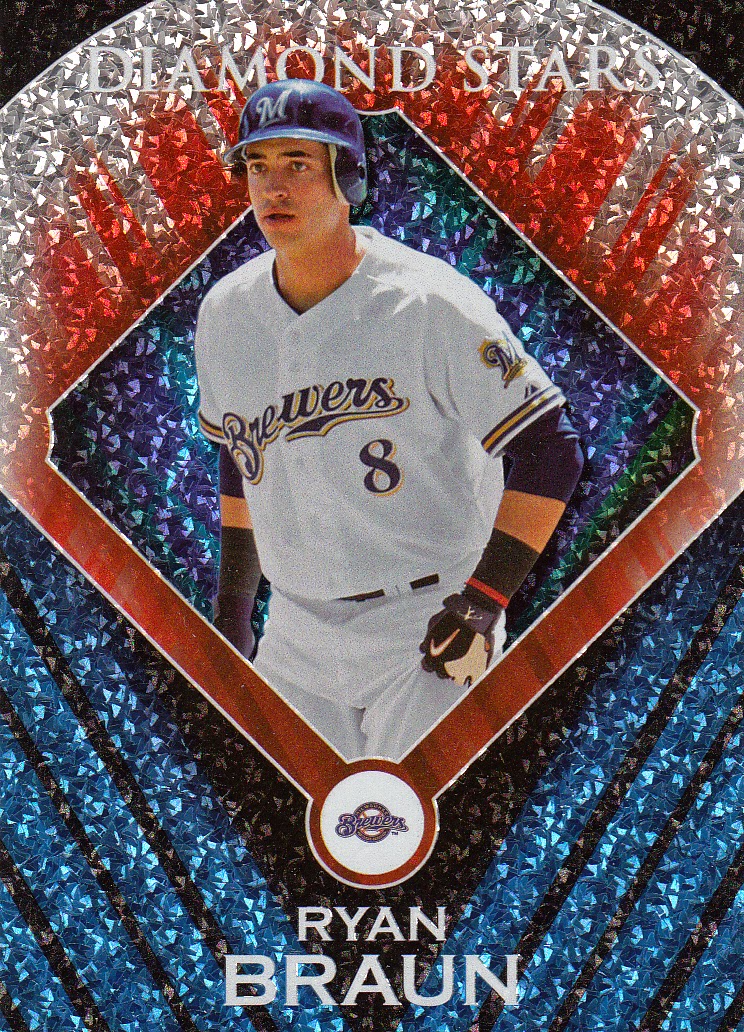 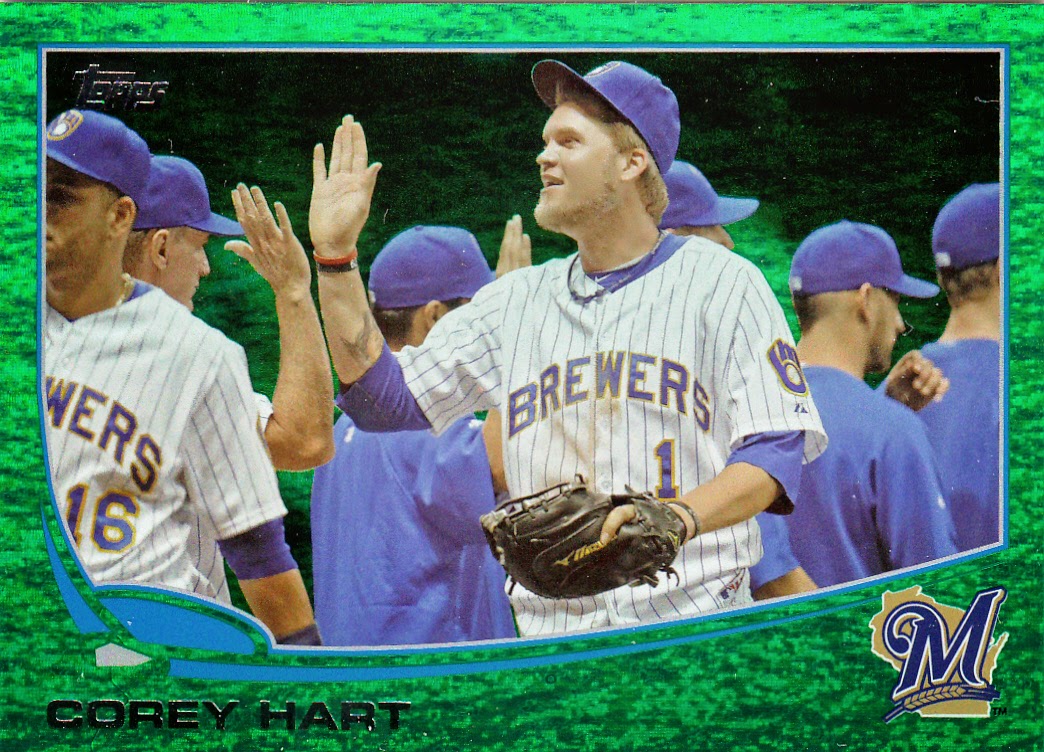 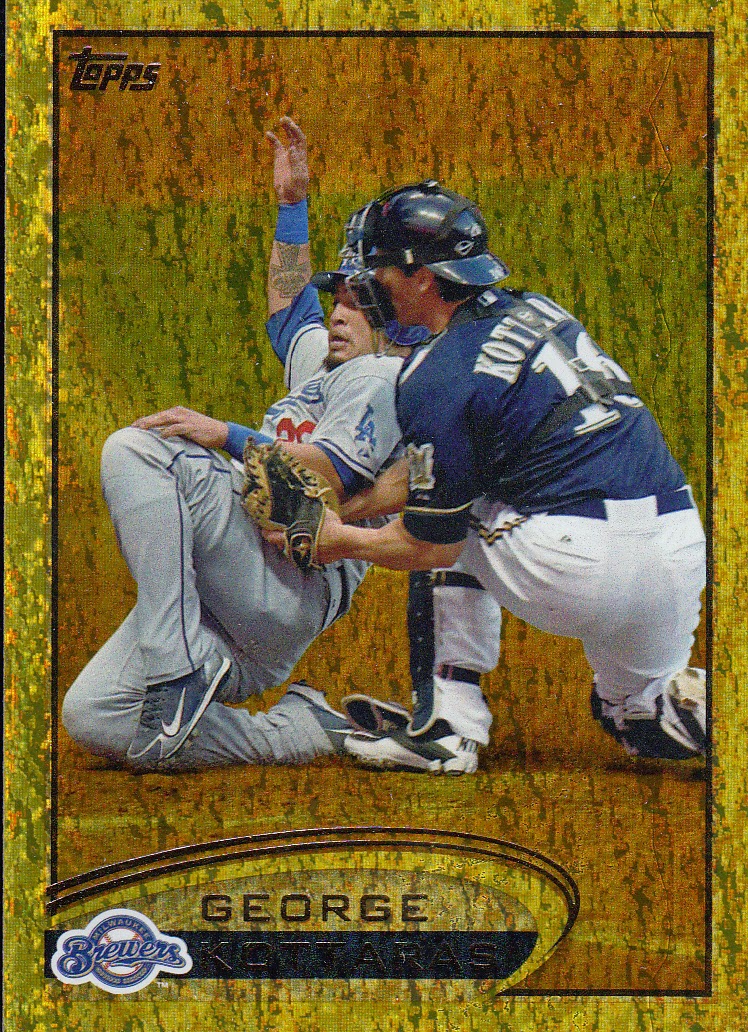 Thanks Alex -- I do hope that I have it correct and you sent these.  They are very much appreciated!
Posted by Tony L. at 7:47 PM