I got it in my head maybe 10 years ago that I wanted to collect baseball books rather than baseball cards.  The books went well with my living alone -- I could pop open a bottle of wine after a long week of work, throw on some music on my old XM Radio, and I would get totally into a zone reading whatever book it was.  Indeed, I tried collecting the books that Bill James cited to frequently in his Revised Historical Abstract.  To be fair, that didn't last long, but Christy Mathewson's Pitching in a Pinch is a pretty decent book for being a ghost-written book from 1909.

Anyway, I'd be on my patio in the heart of Midtown Atlanta with this as my view: 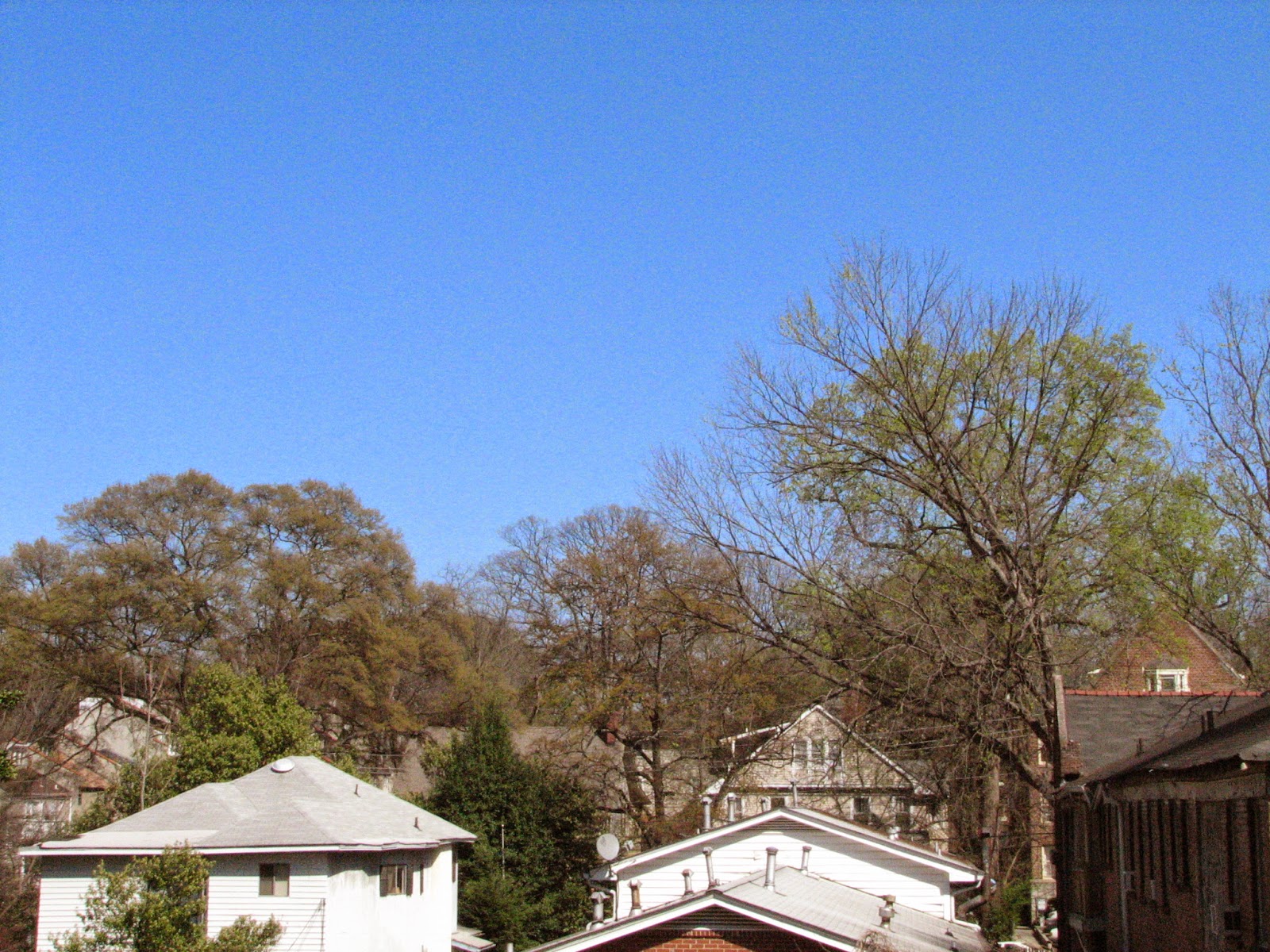 And that brings me to the memorabilia tonight.

Back in around 2002 or 2001 even, I made a purchase on eBay of a number of the American League Red Books and National League Green Books.  If you don't know what these are, they are essentially media guides issued by the league offices back then.  Here's what the cover of the 1970 one looked like (and apologies -- my copy is in a little rough shape on the covers): 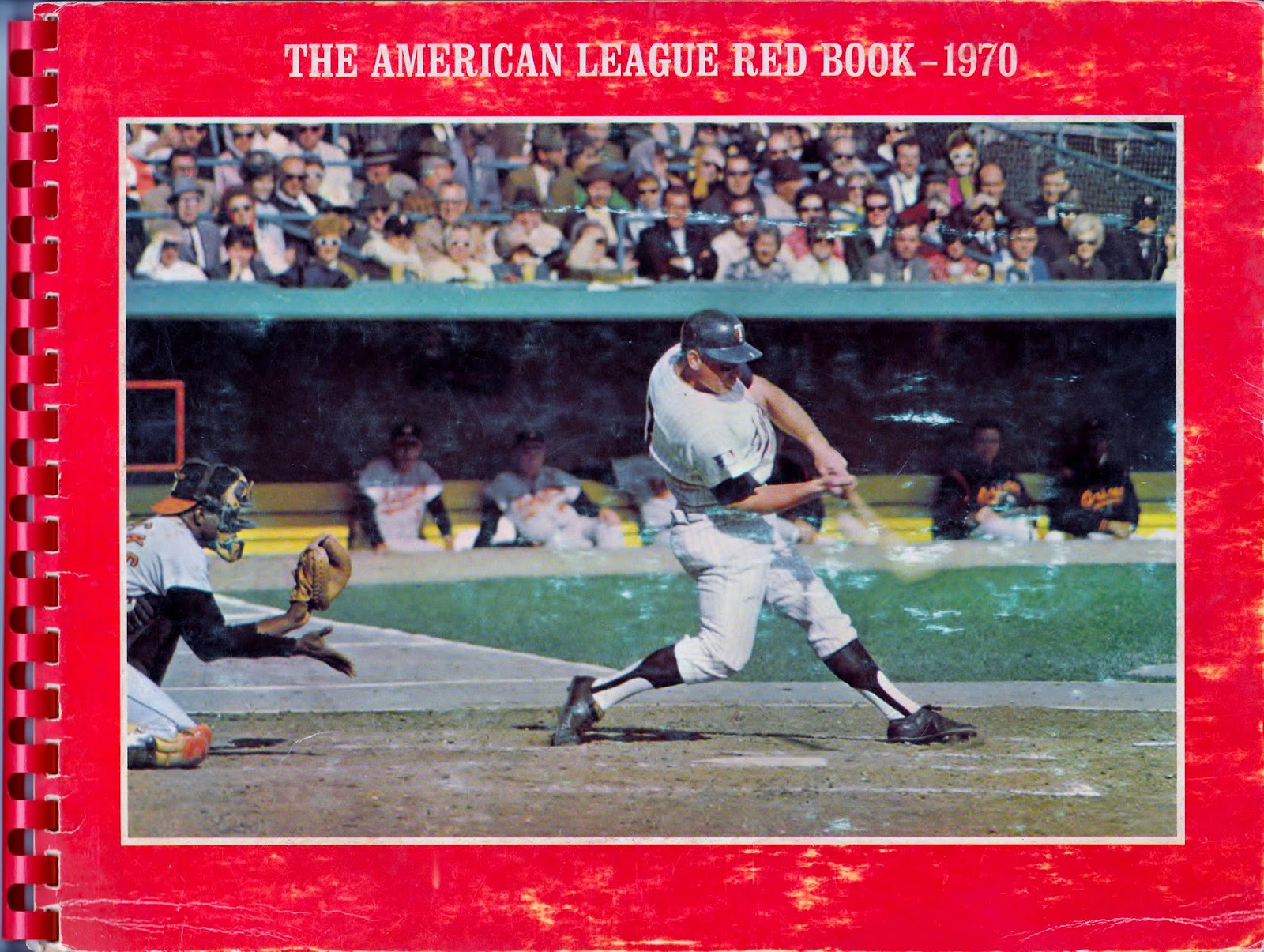 On the cover of the 1970 Red Book was American League MVP Harmon Killebrew.  What a lot of people don't know -- or what many of us old enough to remember sometimes forget -- is that the AL and the NL were two separate legal entities until about 14 years ago or so.  In many respects, they acted as competitors. This book only mentions the National League as part of providing a complete Spring Training schedule.

To be clear, this is not a page turner.  It is filled with lists of team records for career stats, seasonal stats, team rosters, and various rules that would be helpful to people in the media.  The book does feature one slick magazine paper page containing color photos -- color by Raphael, as the page notes.  Here are those two pages: 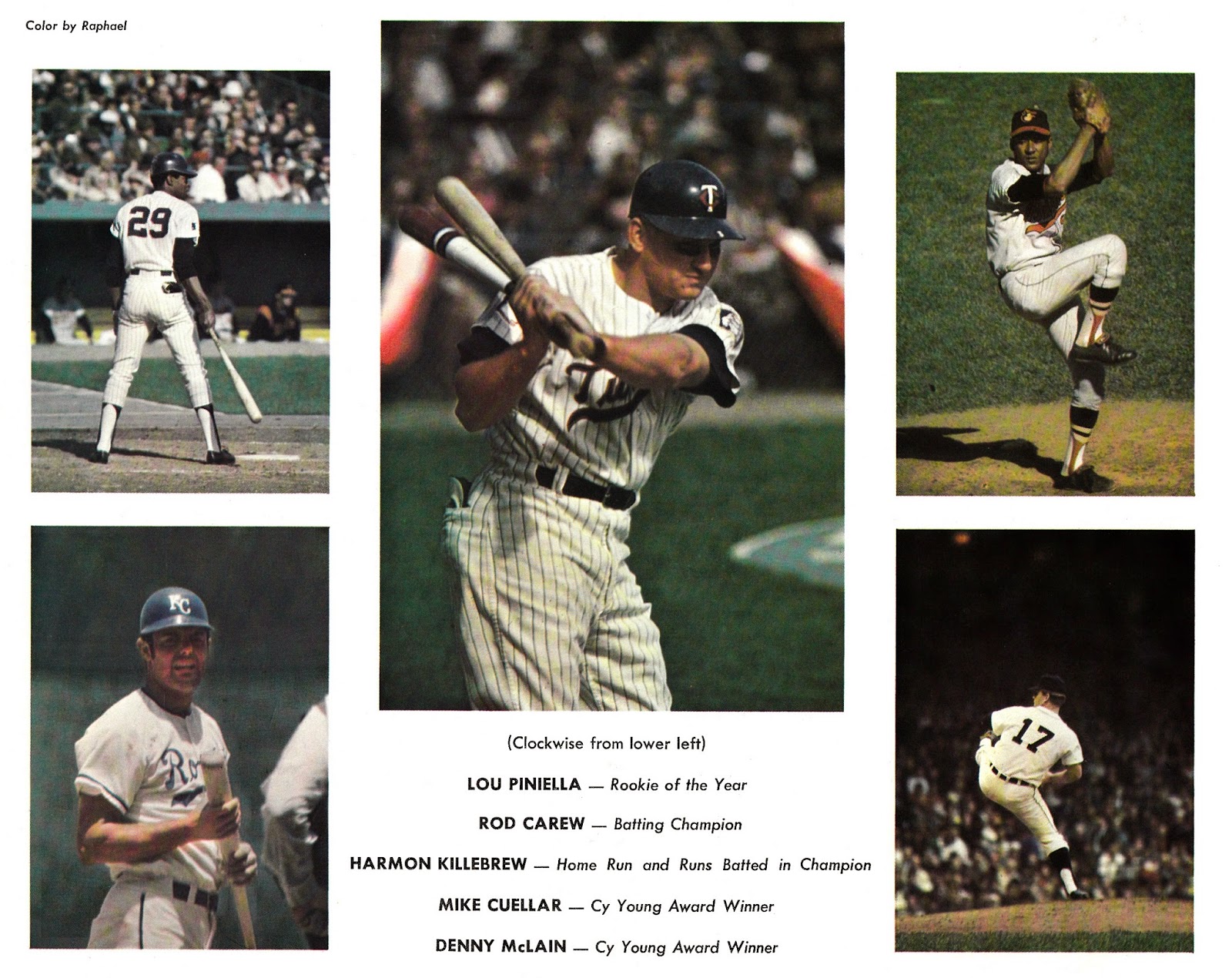 My favorite photo might be the one in the upper row middle below -- Richard Nixon greeting Washington Senators manager Ted Williams. 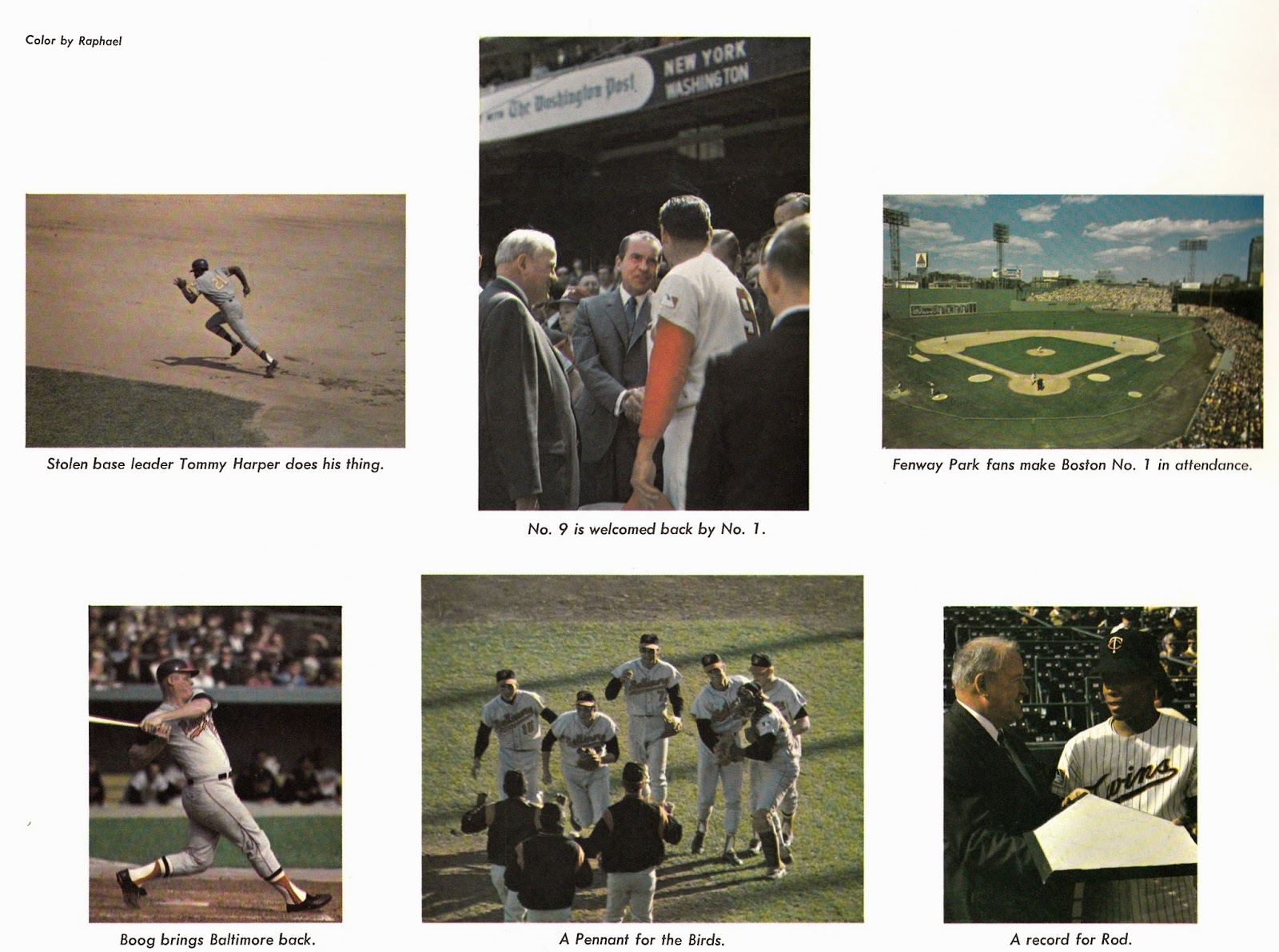 Of more interest to me as a Brewers fan, though, is this yellow insert sticking in the middle of the book: 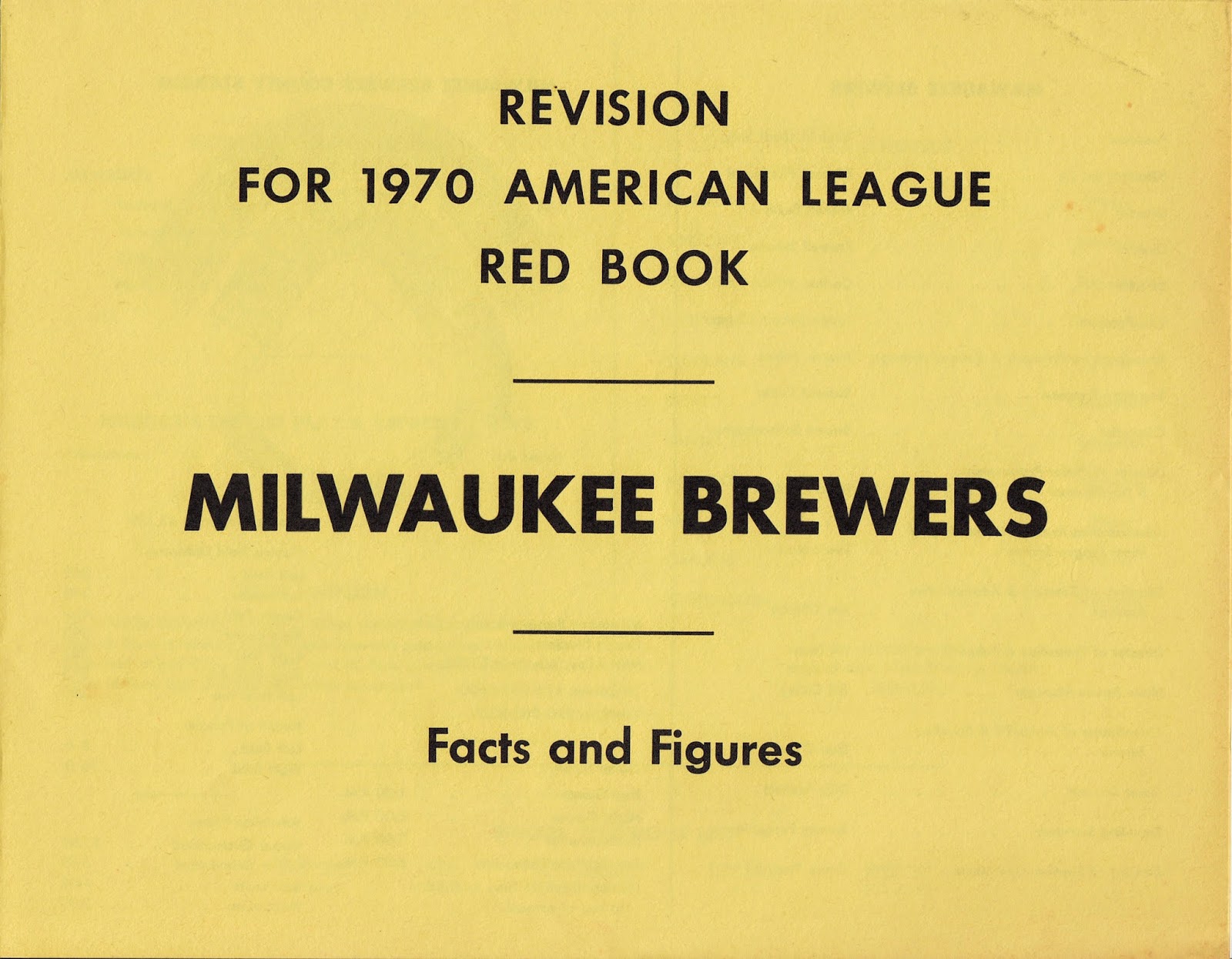 Since Bud Selig and his group of financial backers purchased the Seattle Pilots after discussions late in 1969. Final approval for the sale and relocation did not come until March of 1970 -- meaning that the Red Book had to be revised to account for this.

Here's the inner sheets from this insert: 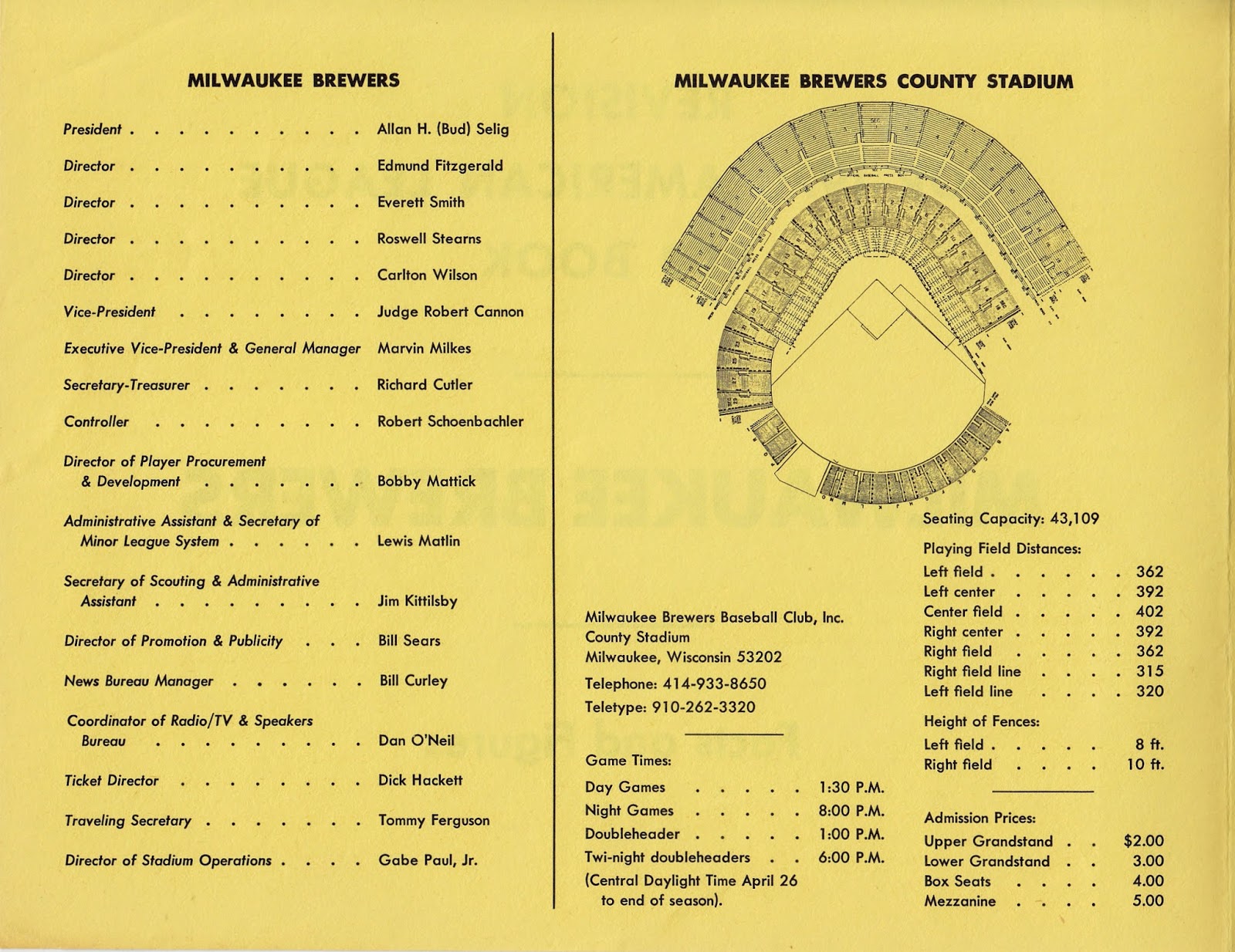 For you aficionados of Gordon Lightfoot, you may be surprised to learn that Edmund Fitzgerald was not just a huge freighter that sank in the big lake called Gitche Gumee.

Okay, I gotta put that in here:


That freighter was named for the father of this Edmund Fitzgerald.  That man was the chairman of Northwestern Mutual Life Insurance Company.  Fitzgerald Jr. of the Brewers only passed away last September at the age of 87.  Even in Young Ed's obituary in the Los Angeles Times, the freighter was the focus of half the story and of three of the first four paragraphs. 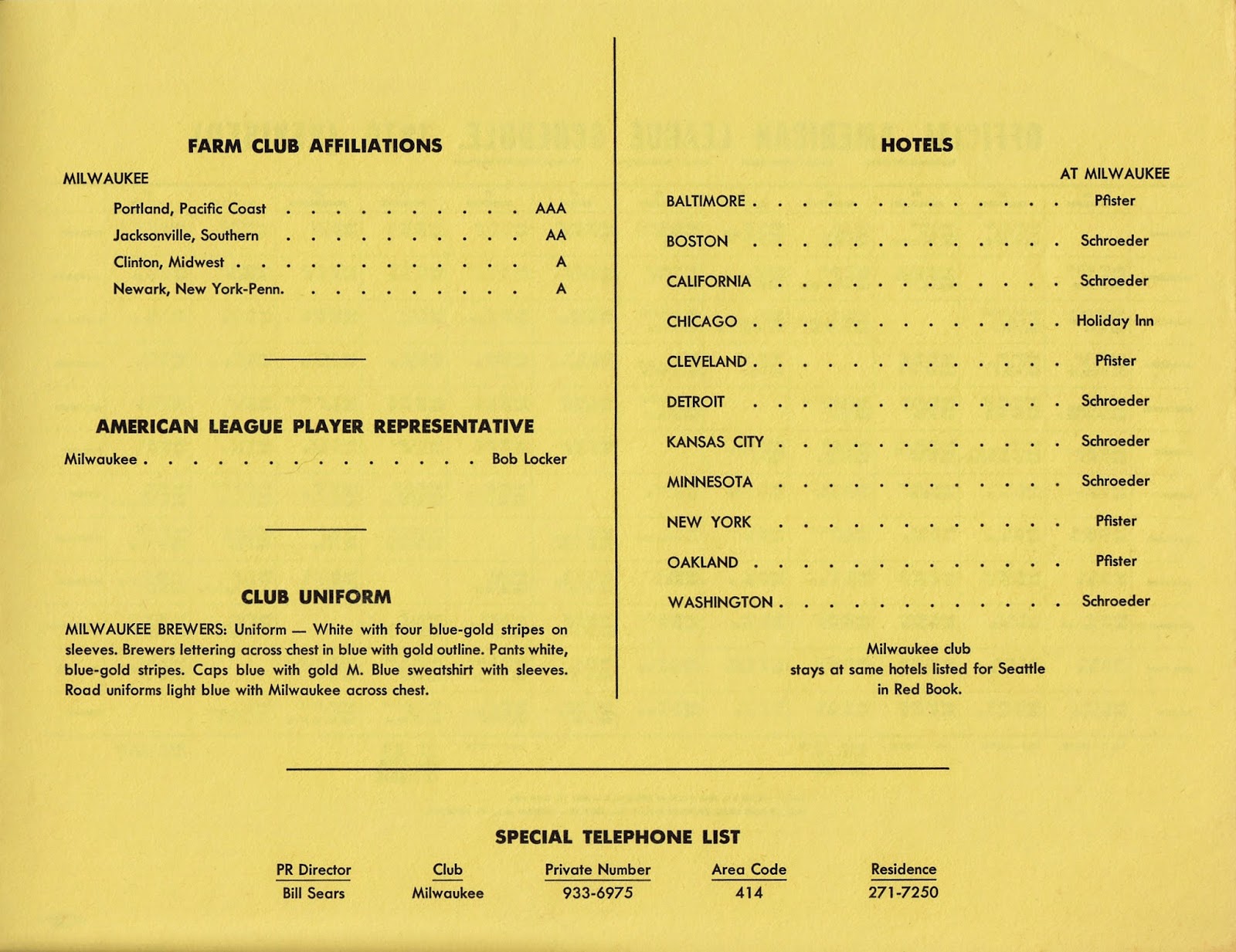 The second page in this insert is above.  An item here that caught my eye was the list of hotels at which opposing teams stayed when visiting Milwaukee.  The Pfister is still in downtown Milwaukee, and has the feel you would expect for an old-school-style hotel -- it feels very much like a Midwestern version of the Waldorf Astoria in New York.  It has lots of brass, Oriental rugs in the lobby, and lots of marble.  The Schroeder Hotel is now known as the Hilton Milwaukee City Center and, in the 1980s, was called the Marc Plaza Hotel.  Again, very much an old-school, upper crust hotel.

I guess those hotels wouldn't let the White Sox stay there, so for them it was off to the Holiday Inn.

The final point of interest I saw was the League providing the home residence phone number for the Brewers Director of Public Relations, Bill Sears.  I am not surprised that they would provide his direct line at the ballpark, but one would think that the guy's home phone number would have been off limits.

The final fun part of this book was in a pocket in the back of it:

I took the liberty of redacting the name of the person to whom this envelope was sent.  But, on May 15, 1970, the American League "RUSH!" mailed out updated rosters for all the teams in the league to the people who purchased the book or otherwise were on the AL's mailing list for such materials.

It's a strange, cool time capsule into what both baseball and America were like 44 years ago to see this type of memorabilia, and I hope you enjoyed seeing it.
Posted by Tony L. at 7:59 PM