I have no idea why, but for some reason I'm feeling like hearing some jazz music. I used to listen to and play jazz a lot when I was in high school -- I started as a freshman on baritone saxophone, then went back to my alto sax and even picked up a soprano saxophone for jazz as a senior.

Every so often, I go back and listen to some of that music. For the rest of the vintage cards I picked up over the weekend, jazz seems to be an appropriate accompaniment. Going by the year of the card, I'll pick out something released that same year.


To start off is this chart by Modern Jazz Quartet comprised of John Lewis (piano), Percy Heath (Double Bass), Connie Kay (Drums), and Milt Jackson (vibraphone). This song is very much in the genre of cool jazz or even smooth jazz -- very laid back, very melodic, and just chill. That song will take an edge off the day and make you feel like you should be meditating, or reading a book with a glass of bourbon or wine, or just paging through old baseball cards. 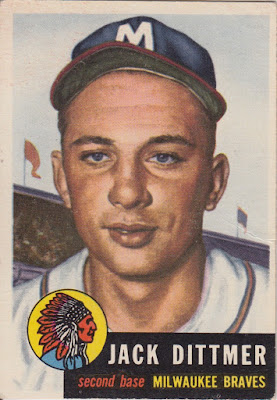 And, if you're going to page through old baseball cards, why not go through the real 1953 Topps set rather than the Archives redo that we have this year? Having found this beautiful painting of the Jack Dittmer, I now only need card 215, Gene Conley, to finish my Milwaukee Braves 1953 Topps set. Of course, half the team set was released as Boston Braves, so that's skewed results favorably in my direction.

Gerry Mulligan is without question one of the greatest -- if not the greatest -- baritone saxophonists in jazz history. We're still in the cool jazz genre here, but Mulligan and Baker together as heard here are renown as one of the most important groups in that genre. I have to admit that this one is good, but it doesn't draw me in. Mulligan is great, but it feels a little academic in many ways. 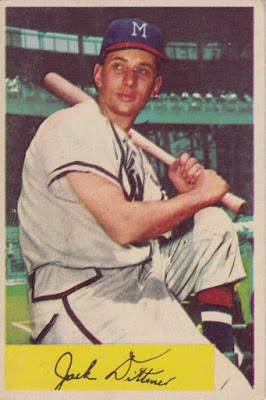 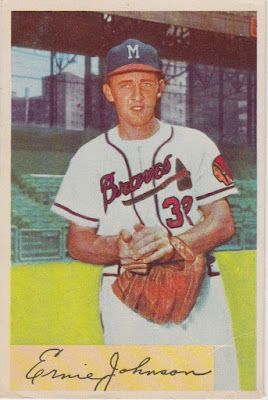 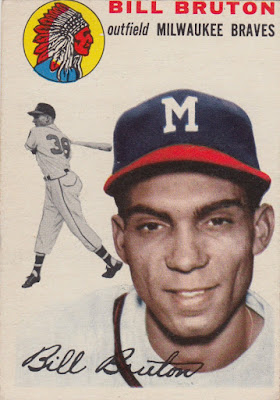 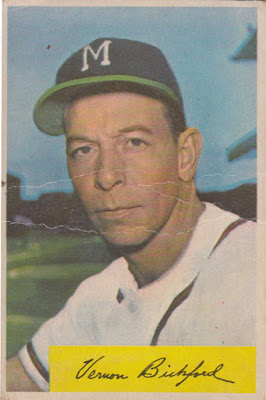 It's too bad that cool jazz -- while decent -- really comes across a bit light because these cards deserve more. The Bickford is a bit beat up, but to get two Bill Brutons -- including that Bowman, which is the last card in the set -- and the Ernie Johnson rookie card were just great finds for not more than $4 for any one of these (Bickford was $1, I'm pretty sure).

By the way, doesn't Jack Dittmer look a lot better here in this photo rather than in the 1953 Topps painting? That painting makes him look super ugly.

The jazz world lost a legend in 1955, as Charlie "Bird" Parker suffered a heart seizure thanks to years of ignoring his health and shooting up heroin. He was only 34 years old, but his impact on jazz through his hard playing bebop style is undeniable. This song is one of the more approachable, easier to play songs for an alto sax player. Many of the others are damn near impossible for mere mortals like myself to play. 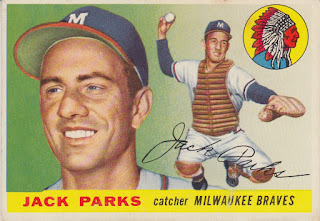 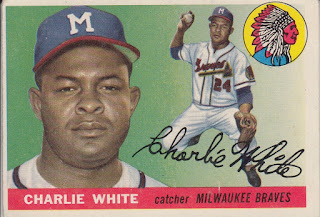 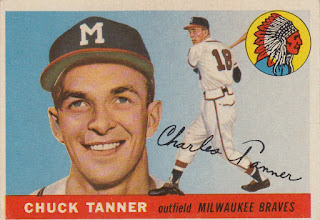 The beauty of 1955 Topps cards comes through here. Topps started bringing its "A" game in the mid-1950s and, more to the point, started crowding out Bowman through exclusive contracts. Bowman lost money and got bought out to start the first Topps monopoly era.

I feel bad for Charlie White, though. One would have thought that the Braves would have allowed him to use equipment to catch like Jack Parks has. Damn that racism.

In later years, this song got rearranged with the lead sax part played on a soprano saxophone rather than a tenor. It's a totally different feel -- in fact, it's the song that I played soprano on. Soprano sax is tough to play in tune.

Then again, pretty much all saxophones are tough to play in tune. 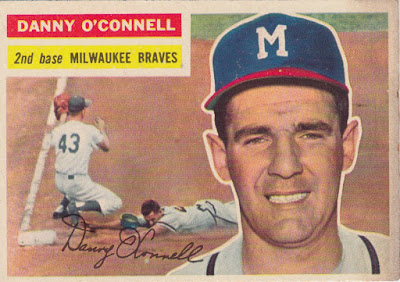 Danny O'Connell appears to be gritting his teeth and listening to a bad sax player here.

Okay, I'm going to ditch the songs year by year because otherwise I'll never get through the rest of the cards. But I'm going to pick some favorite songs my high school jazz band played or simply jazz songs I like to accompany the cards.

Damn this song was hard to play. After the long walking bass part at the beginning, the entire saxophone sections comes in and is supposed to sound essentially like one saxophone playing all those notes all together. And that solo -- not easy. 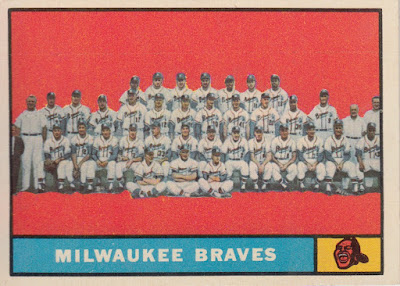 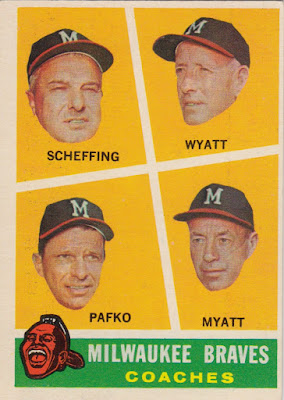 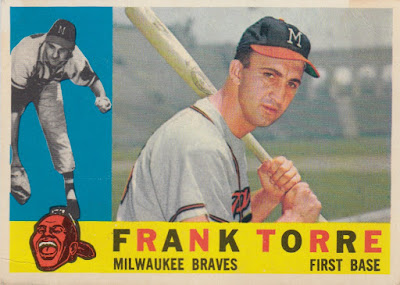 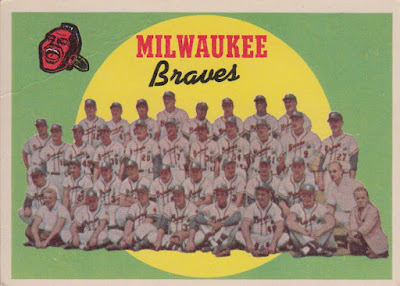 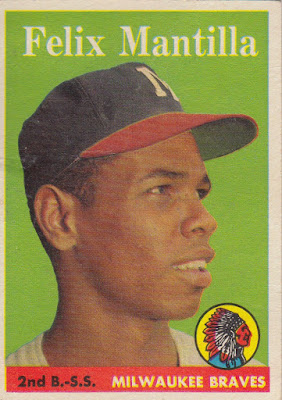 Yeah, pretty clearly not in the 1960s any more, but this Brecker Brothers chart just rocks. Funk to the extreme, dirty, nasty, in your face -- kind of like what I'm sure the East River was like in the 1970s before people paid more attention to our environment and cleaned it up some. 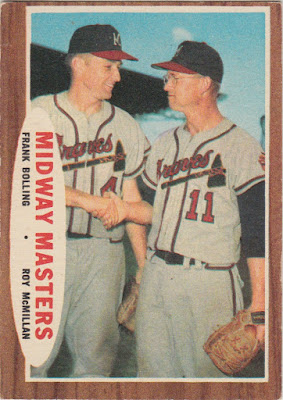 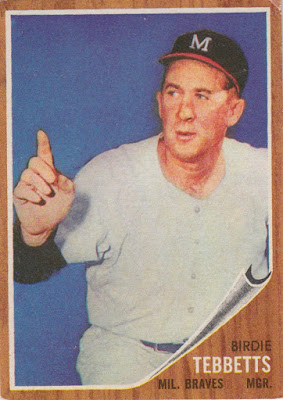 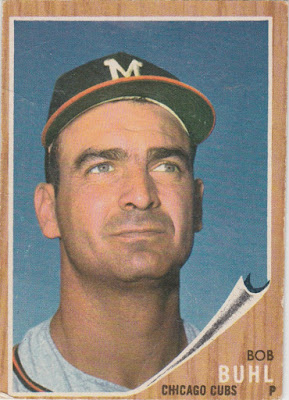 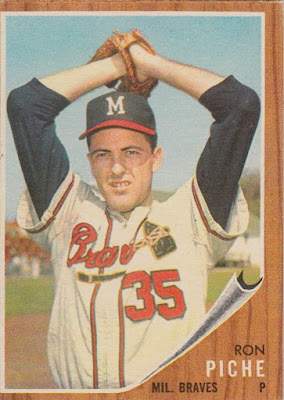 I feel like 1962 Topps goes with funk really well. You get Topps basically saying, "aw, to hell with it" and not airbrushing Bob Buhl's Braves hat off while, at the same time, Birdie Tebbetts looks like an extra from a live version of Clement Moore's "A Visit from St. Nicholas." All he needs is mama in her kerchief next to him.

Paul Desmond nailing the alto saxophone part there looking about as uncool as a saxophonist can (until I came along, probably). Brubeck is pure genius. The song has a very unique 9/8 time signature but it feels like a straight 4/4 time regularly -- where it feels like that extra beat in the measure is just stolen from somewhere.

I loved listening to this music as I learned how to find my own voice in jazz improvisation. I could never been any of these guys, but I loved picking what I could from each. 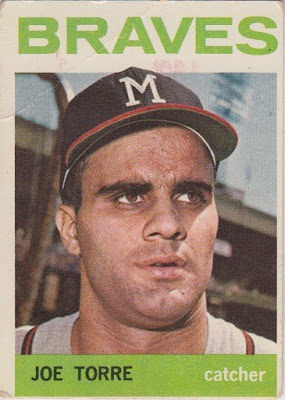 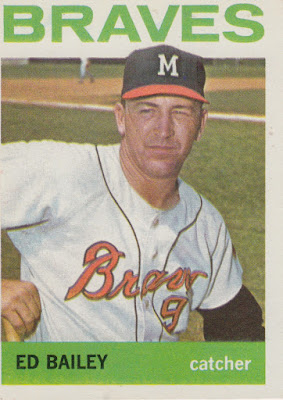 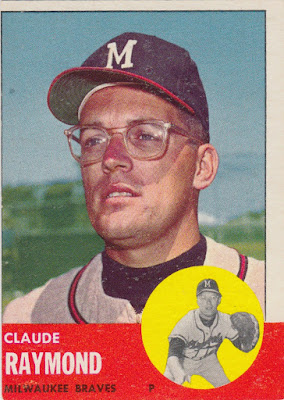 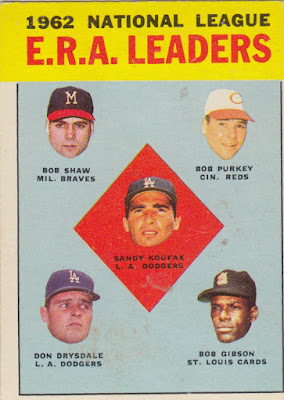 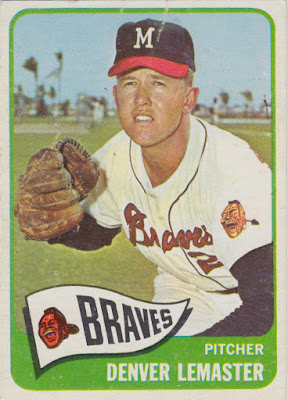 Thanks to Bob Shaw, I had to buy a card featuring Sandy Koufax, Don Drysdale and Bob Gibson. Thankfully it was not too expensive.

Also, for you Canadians, say hello to St. Jean, Quebec's own Claude Raymond from 1963 as well. Unsurprisingly in that politically incorrect age, Raymond's nickname was Frenchy. He was inducted into the Canadian Baseball Hall of Fame on July 26, 1984.

So, that's what I was able to pick up over the weekend. I probably could have gotten more there if I had more money I was willing to spend.

Okay, one last song from another virtuoso. This time, it's a real soprano saxophone player.

John Coltrane makes a song from the Sound of Music sound subversive. Now that is talent.
Posted by Tony L. at 8:52 PM