Back in February, Dave the Card Junkie and I made a trade where I gave Dave binders and pages from the massive Christmas Horde in exchange for my getting cards. We did the same thing last weekend.

With Roger's one-man show in town on Dave's side of town, I convinced him to drive the twenty minutes to meet me at the hotel where Roger sets up and take more binders and pages off my hands. He then handed me a massive stack of Brewers in a paper bag. It wasn't exactly clandestine or furtive, but it was still exciting for me to get those cards!

So, to thank Dave, I scoured his Twitter feed for songs that he had posted there. After all, doesn't 44 minutes of prog rock featuring a flautist deserve as much publicity as possible?

Of course it does.

I can think of no player better suited with an introduction of a self-indulgently long prog rock song than Jeromy Burnitz. I'm not sure why that seems appropriate, but it does. Burnitz reminds me of an outfielder version of Dan Uggla -- very much a bro -- who would apparently empty out bottles of shampoo in the showers on road trips after the last game of the series and pee in them.

Oh, you're such a funny guy, Jeromy! 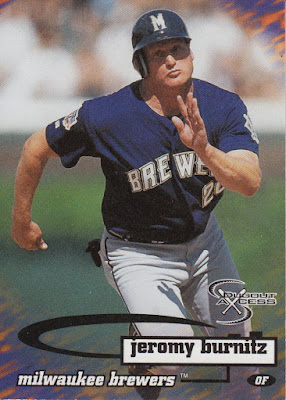 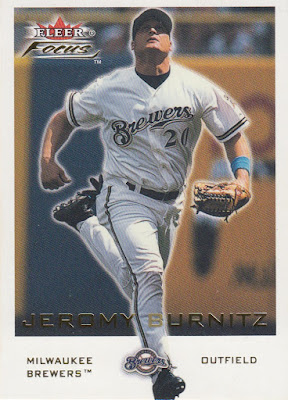 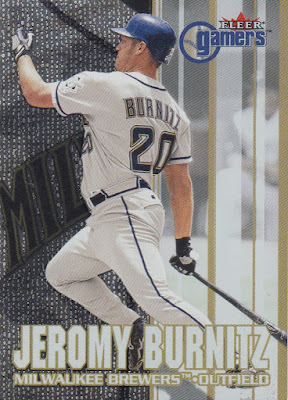 Burnitz was still a very good homerun hitter in his travels around the major leagues playing with seven different teams (four in Flushing, bits of two seasons with Cleveland, a year each with Colorado, Pittsburgh, the Dodgers, and the Cubs, and six in Milwaukee). He was an All-Star once in Milwaukee and actually started the 1999 game in place of the injured Tony Gwynn. He even finished second in the Home Run Contest to Ken Griffey Jr.

A little morning Black Sabbath is a great way to wake up. Geezer Butler on bass really runs every Sabbath song. Yeah, Tony Iommi's lead guitar is really distinctive, but when you hear that underside of each song -- the thumping bass -- you know who is really in charge. 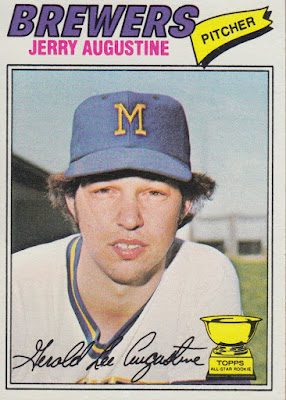 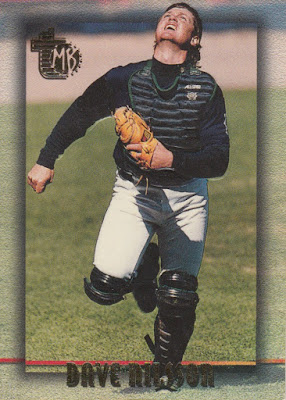 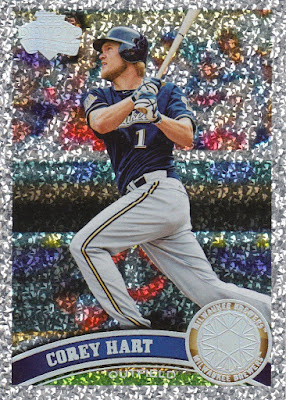 These three guys tended to be the understudies for the Brewers' stars of the time during which they played with the team. Of the three, the only one who ever led any Brewers team in WAR was, perhaps surprisingly, Corey Hart in 2007. Augustine really had only two decent seasons -- his first two in the major leagues -- while Nilsson was always behind Jeff Cirillo, or John Jaha, or Ricky Bones, or Greg Vaughn, or B.J. Surhoff, or all of the above in his years in Milwaukee.

Watching the MLB Draft's first couple of rounds on Thursday night was like watching NBA Draft coverage from about 15 years ago or so. I say that because the random assortment of "experts" that MLB Network compiled engaged in the most obvious of lazy comparisons when talking about players. The tall, African-American centerfielder from Atlanta had to be a Jason Heyward comparison. The good-hitting catcher with questions about his fielding was, of course, Kyle Schwarber's younger twin. If a player was white, he would only be compared to white players. If the player was black, then only black players would be comparable. 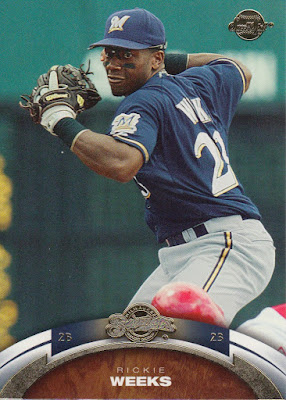 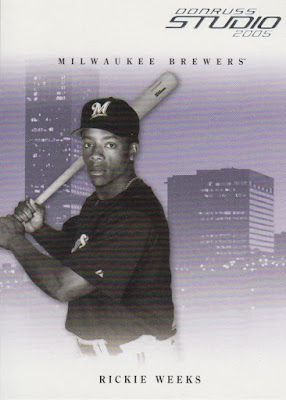 If MLB is going to be that way, then I will post Rickie Weeks cards with Robert Johnson's music. To be fair, posting old blues songs and then putting up cards of Ryan Braun just doesn't feel right.


Here's a new one on me. Well, okay, to be fair, I'd never listened to that Jethro Tull song before, but at least I'd heard of the band. I've never heard of the The Avalanches before. This video is just incredibly weird. Perhaps, to appreciate the song, it might be better to read something else and not pay attention to the video at all. 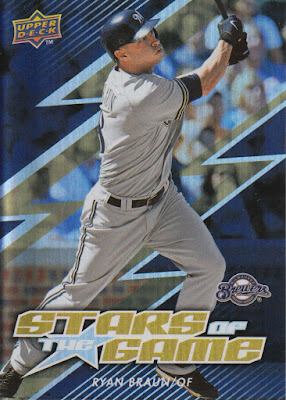 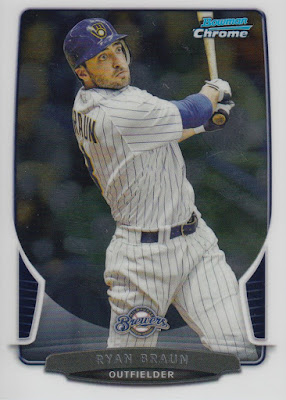 Sort of like how I pay no attention any more to any of the Ryan Braun haters out there. I could get all worked up and point to the fact that Braun just took steroids rather than beating up his girlfriend or wife, or being a swimmer-rapist with a Stanford scholarship, or being a racist presidential candidate or a lying dissembling presidential candidate, or being any number of far scarier, more morally reprehensible people.

I'm really excited for when Mets fans have to hold their nose and cheer for him when the Brewers trade Braun and Lucroy to New York for Zack Wheeler, Travis d'Arnaud, Dominic Smith, and a lottery ticket like Jhoan Urena or Andres Gimenez (who are both so far away from the majors at this point that they can be nothing more than a lottery ticket)...or, when the Yankees trade Aaron Judge, Luis Severino, Domingo Acevedo, and Gary Sanchez for the two and turn Lucroy into a first-baseman to replace Teixeira.

WARNING:
If you have epilepsy, you shouldn't watch this next video. It consists of 3:39 of the photo above repeatedly illuminated by strobe lights.

Les Claypool is another notable bass player, having come to prominence in the 1990s with the band Primus. This song is not going to be everyone's cup of tea, as it features a lot of overdubbed vocals, a fair amount of repetition, lots of self-sampling, and it isn't exactly melodic. 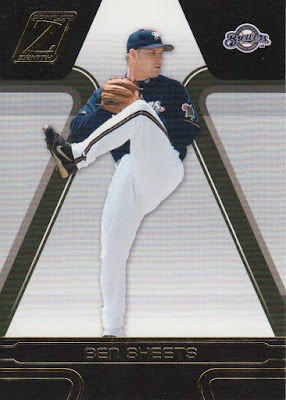 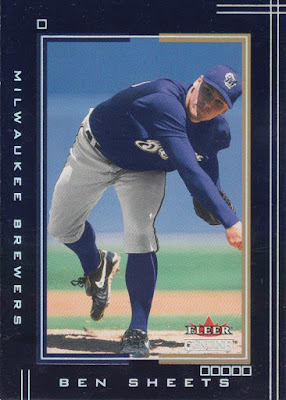 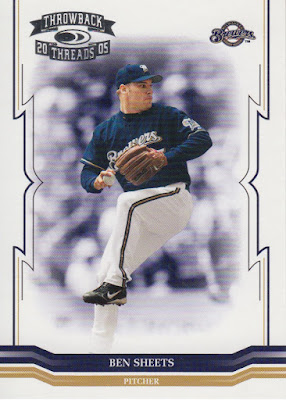 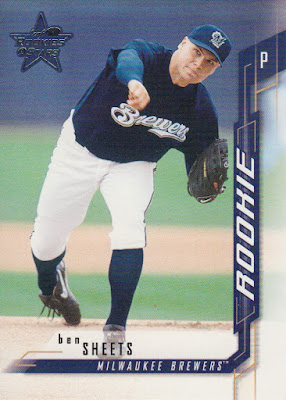 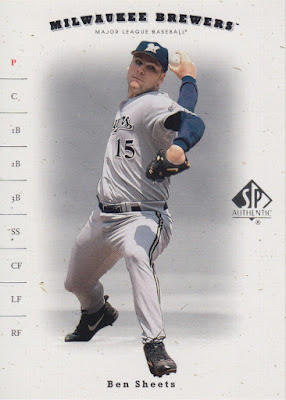 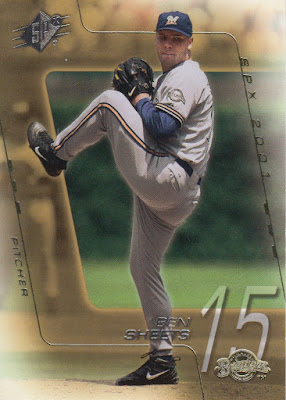 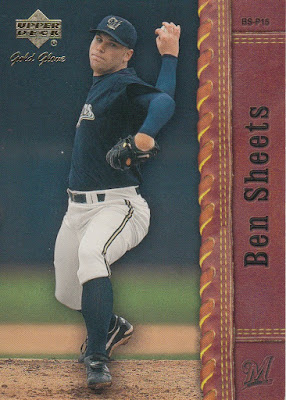 Not exactly melodic describes Milwaukee Brewers baseball perfectly in the time that Ben Sheets was in his pomp. The team did well in 2008 with him -- and that was his last season of making a regular rotation turn. Indeed, that season almost certainly was the death knell of Sheets's career. He threw 198-1/3 innings and got the team to the playoffs, yet he did not get to enjoy pitching in the playoffs due to a torn elbow muscle. After that injury, he threw just 168-2/3 innings over the rest of his career in 29 starts -- 20 in Oakland in 2010 and 9 in Atlanta in 2011.

A little Radiohead to close things out here. This is from Radiohead's newest album, "A Moon Shaped Pool." In typical Radiohead-fashion, it's a bit abstract. The video looks like the old Rudolph shows with stop-motion animation going on, though this is probably done with computers, if I had to guess. 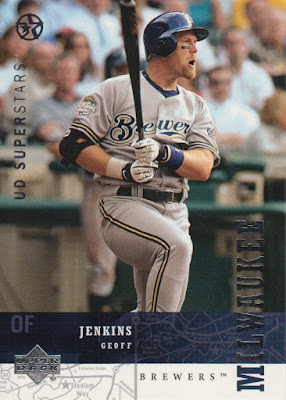 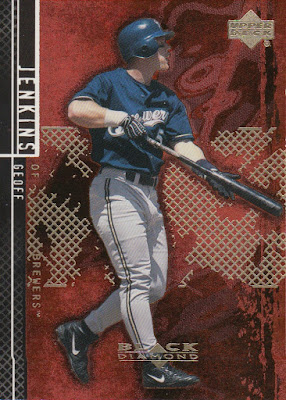 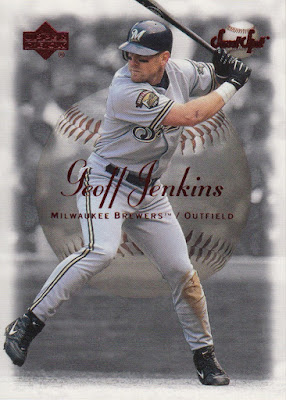 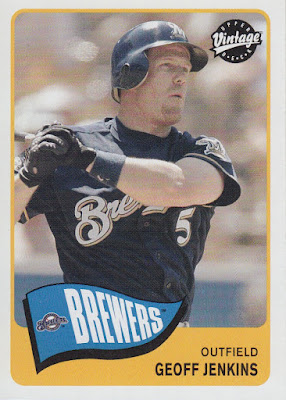 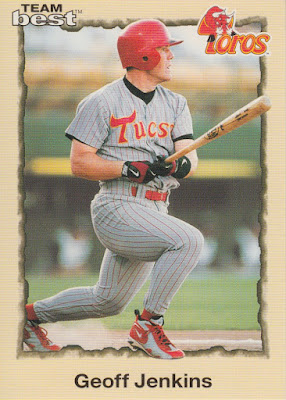 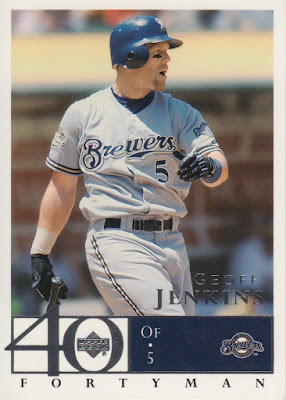 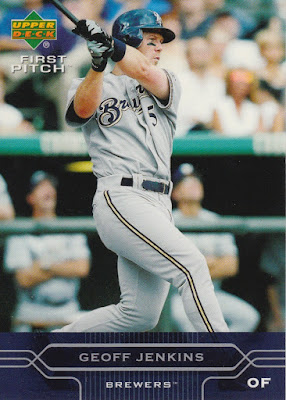 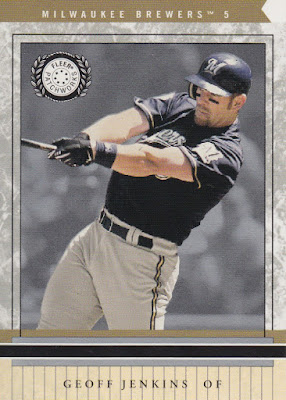 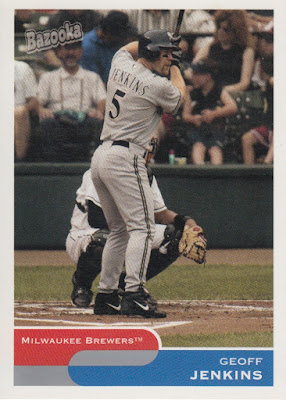 When Dave handed me the bag of Brewers, he said, "I hope that you like Geoff Jenkins." Now having 170 Geoff Jenkins cards in my PC for him, that answer is "yes, I do indeed." I have to admit, though, that my favorite card amongst these Jenkins cards is that minor league card of Jenkins with the Tucson Toros.

For whatever reason, I'm starting to get drawn more and more to the minor league cards. It's probably the rebuild that's ongoing in Milwaukee currently that has me scouring the minor leagues. But, even as a kid, I loved reading the old Baseball Digest prospect wrap-ups each year. I'm not a rookie-card chaser, to be fair, but I love reading about and finding out about prospects.

Thanks, Dave, for the great cards. I hope you enjoy those binders.
Posted by Tony L. at 11:31 AM