Thanks to Dave, the Cardboard Junkie, I was able to find out about the very cool one-man traveling card show operated by a gentleman out of Norman, Oklahoma named Roger. Roger really doesn't keep his website all that up to date -- it hasn't been updated since 2011 -- but that's kind of unsurprising. Roger's very much a paper-and-postcard kind of guy.

He has a loyal following around the country. People hear about his shows initially like I did -- by word of mouth. Once you go, you get on his mailing list. He then drops you a postcard -- always green, I'm told -- that you look forward to seeing three or four times a year which gives you the heads up that he's coming to town with his boxes and boxes of cards.


It's a hell of a lot better than a mailbox full of realtor flyers.

Roger caters to the high-end collector, in many respects. In the boxes I saw there, he had top-of-the-line tobacco cards, rookie cards for multiple sports, and top condition commons and stars from the 1940s through the early 1970s. The box I flipped through is probably the same one Dave focuses on, though -- the more reasonably priced cards that Roger has bought over the years that have writing, or minor creases, or not quite perfect centering, or not quite perfect corners.

The cool thing to me was just sitting there chatting with Roger and the other guys who stopped in. This is a regulars-type crowd, but it's an incredibly welcoming crowd.

I added to a number of my player collections, so let's start with the Joe Adcock cards:

Thanks, Joe, for talking to the good folks in Tulsa. That interview was, I believe, done in 1957, as Adcock said that "this" season would be his eighth in the majors. Joe says that he was feeling great and hadn't missed many games the previous year (he played 133 in 1956). Unfortunately, he played only 84 in the Braves World Series season. Still, he was only 29 years old at the time. But for those injuries he encountered, it's entirely possible that he would have hit 400 HR in his career. 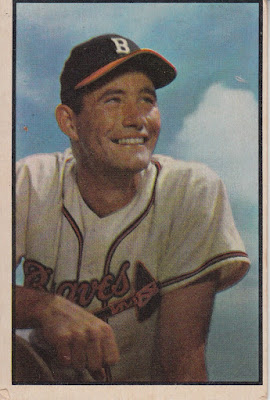 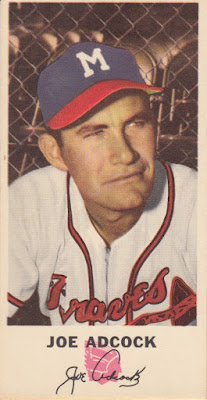 These two Adcocks were among the most expensive cards I bought. The one on the bottom is the 1954 Johnston Cookies issue, a Milwaukee Braves oddball that fits well with the city of Milwaukee. The one on the top is the 1953 Bowman Color set. I bought this one and left behind a bunch of other Braves from that set thinking, "why do I have them listed on my wantlist? They're all Boston Braves!"

Then I get home and see that Joe is listed on the back as a Milwaukee Brave. The moral of the story is that I should always trust my wantlist.

For the life of me, I can't find a YouTube interview with Harvey Kuenn anywhere. Just for that, I'll turn to this fantastic Shepherd Express article for a great photo of Harvey with Sy Berger. 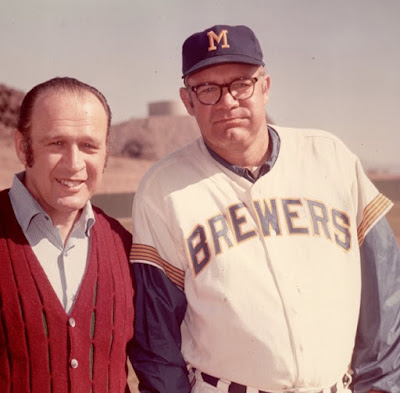 Harvey deserves that respect. Just like these two cards give him: 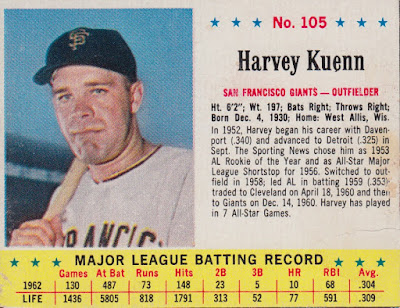 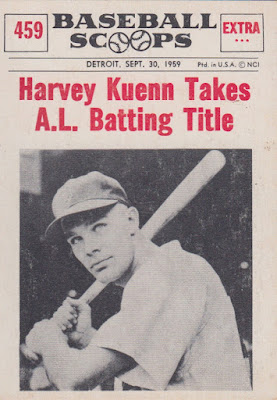 Yup, two oddballs. I can't help myself. Of course, I also am not 100% sure whether the top card is a Jell-O or a Post card from 1963. The bottom one is definitely a 1961 Nu-Card Scoops with sharpish corners.

I picked up a couple of Eddie Mathews cards too. Let's turn to the official Hall of Fame biography video for Eddie:


I haven't picked up the first ever Sports Illustrated with Mathews on the cover, but it is on my list of things that I definitely want. A 1954 Bowman, though, is not on that list any more. 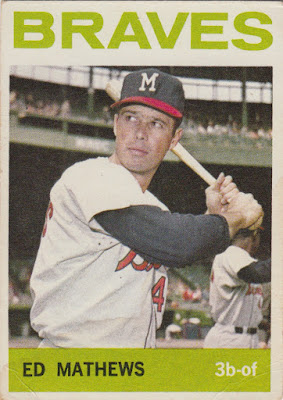 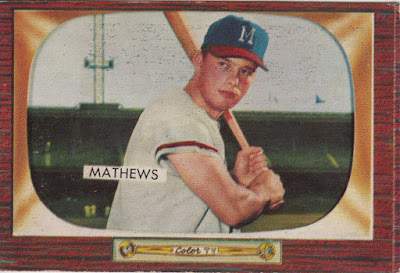 Well, okay, it still is because I need another one for my Braves team set, but man is that card a nice card for what I paid for it. Again, other than the Kuenn Nu-Card Scoop and the Adcock Johnston Cookie card, these all came out of the "bargain" bin with few cards costing more than $5 each.

The coolest little fact in this vignette comes from Joe Torre, who said that he had the distinction of pinch-hitting one time for Spahn and also having Spahn pinch-hit one time for him. 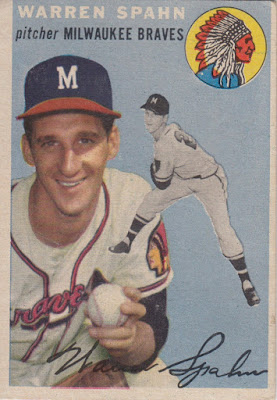 Roger told a story about Spahn while I was there. He met Spahn and got to know him a bit. Spahn, though, was one of those guys who never remembered a guy's name but remembered a face. To Spahn, Roger was always known as "Oklahoma." Since Spahn settled there and, eventually, passed away in Broken Arrow, Oklahoma, Roger felt that Spahn just liked him for being a fellow Oklahoman on the baseball card circuit.

Okay, two more cards to talk about, and then it's a scan dump for the rest.

I actually purchased two whole Milwaukee Brewers cards from Roger, and one of them was one of the more expensive cards I got.

Here's the one that was cheap: 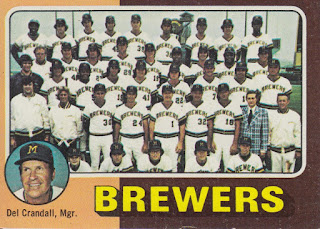 Mini team card! Straight into the Yount collection with that one, seeing as I needed it there. You can see Robin in the second row from the top dead center -- right behind Charlie Moore and Jim Slaton.

Here's the one that was not: 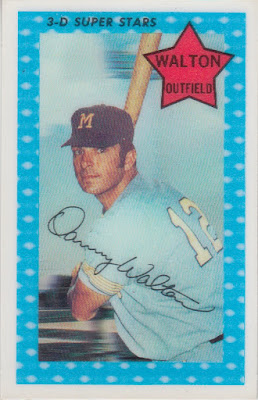 What a fantastic Kellogg's card! It's a 1971 Kellogg's card of Danny Walton. I suppose I could update my "Meet the Brewers" page for him with this. Maybe another time.

Finally, I got a ton more Milwaukee Braves for my Braves collection. I think I'll save them for later rather than just dump them.