Songs Stuck in My Head that Should Come with Bubblegum

The past several weekends, I have found myself doing one of two things. Either I end up watching some show my wife and I have recorded (most recently, Food Network Star and 500 Questions), or I end up sorting through my Brewers oddballs to get them put into a binder for proper storage rather than sitting in stacks on a table.

My seemingly desired method of sorting and displaying is to put Topps parallels and non-food-issues in different binders from the true oddballs like the 1984 Ralston Purina set, which, though produced by Topps, came in boxes of Cookie Crisp and count as real oddballs. This is as opposed to the weird Topps issues such as the strange "rub-offs" that came out both in 1984 and 1985 with the exact same checklists.

Anyway, that's how I'm doing it. It's taking a while.

Thankfully, there are good folks in the Blog world who help me by breaking the sorting depression that sorting and bindering cards sometimes brings my way -- I get tired of sitting in one spot for too long and my mind wanders. One of those people who helped -- this time by sending a great PWE -- is Jeff over at Wish They Still Came with Bubblegum.

Jeff and I have a bet going right now as to which team -- either his Atlanta Braves or my Milwaukee Brewers -- will finish with the better record. He took his Braves, amazingly enough.  While this has changed over the weekend, when the Brewers left Atlanta on Thursday of last week, the Brewers had more wins in Turner Field this year at three than the Braves did at the same point of the season -- two.

The good news, Jeff, is that it's Not Your Fault that the Braves suck. And, may I say, I love that video -- Claymation FTW! That song has been stuck in my head for part of the day today due, I think, to hearing someone talking about "fault" in design on an NPR Ted Talks podcast I was listening to today.

So, Jeff sent me a PWE as a possible down payment on his debt that will come due at the end of the year to go shopping at his local card show for me.  Let's see the highlights: 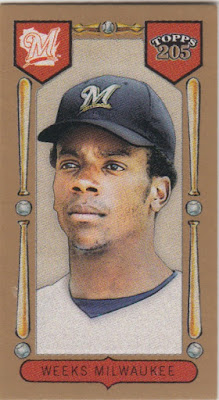 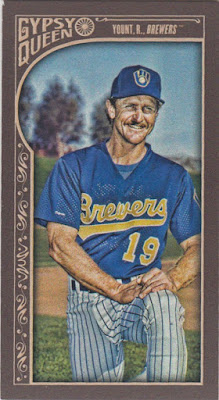 The envelope started out well with these cigarette-card-sized Rickie Weeks and Robin Yount. Gotta love that Topps 205, except for the fact that it's one of 74 different parallels from that set.

This song got stuck in my head today thanks to the fact that there were some storms that went through here. Some powerlines ended up coming down -- and my drive home got rerouted thanks to that -- so the song about "what we do when the power's out" came into my brain.

Also, I'm getting depressed with the realization that the bands in both of these videos are almost certainly young enough to where I could have been their dad without having kids before graduating high school and probably college too.

Screw it. It's still good music to me. 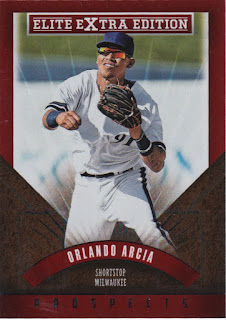 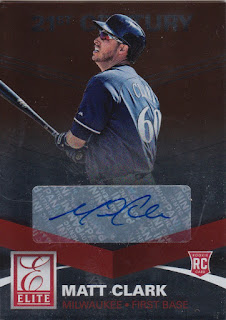 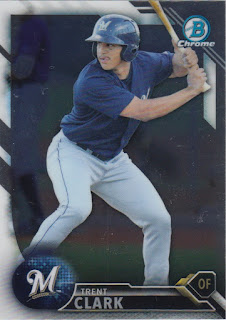 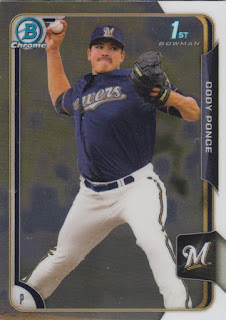 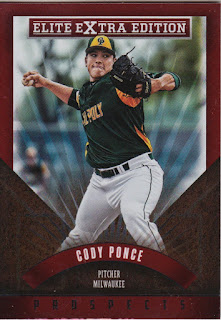 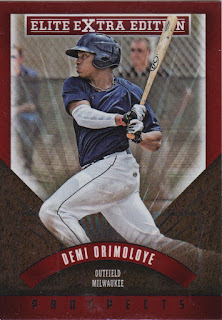 Yes, as a matter of fact I am using the easy transition of, "Speaking of kids young enough for me to have been their dad without having kids before graduating from high school/college/almost law school" (Demi Orimoloye was born on January 6, 1997. I was 25 years old at that point but still a year-and-a-half from graduating law school) to bring out the prospect cards again. Two Cody Ponces -- a guy who is injured already, mind you -- means that, eventually, I might have a new PC guy down the road. Once again, I'm waiting until he gets to the majors to make any decisions.

The autograph is of Matt Clark, who played 16 games with the Brewers in 2014 and hit three homers. Clark is a baseball nomad. After being drafted out of LSU by San Diego, he started on a circuitous path in baseball. He got to Triple-A in the Padres system before going to Chunichi in the Japan Central League in 2013. He hit 25 HRs with Chunichi, so the Mets and, then, the Brewers gave him another shot. After spending all of 2015 in Colorado Springs in the Brewers organization, he was released. At the age of 29, he found himself first with Laguna in the Mexican League -- where he played four games -- before signing on May 17 with the Orix Buffaloes in the Japan Pacific League.

twenty one pilots is an interesting group to me. This song sounds like an outtake from a Ben Folds Five recording session. Other songs of theirs -- like "Stressed Out" -- are totally different and sound more like a laid back Jimmy Eat World or some kind of version of the Pixies on crack or something. Every song of theirs that I've heard, though, reminds me of some other band.

But the one thing I will say is that I used to get Ben Folds Five's "Song for the Dumped" stuck in my head all the time too.


Anyway, where was I? Hell I don't know. How about Drakes? 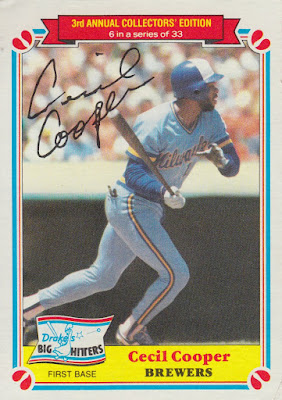 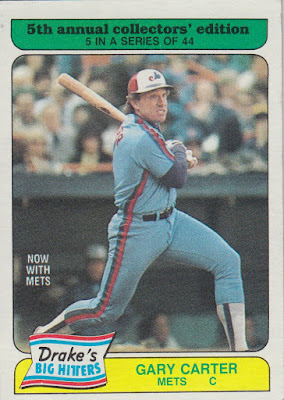 As a kid, I had no idea where to find Drake's. I don't think they ever got to the Midwest. And that upset me. It seemed unfair that I would be denied access to great baseball cards just because I lived in the Midwest.

That was, of course, while I ignored all the awesome police card variations.

Last one. It's a true throwback song to about 20 years ago to go with a throwback card that Jeff sent that is 37 years old.

This song by Eve 6 always got stuck in my head as "the big word song." It was always this song that got the radio play, but I tended to prefer "Open Road Song" over this one many times. Oddly enough, the lead singer of Eve 6 is just slightly older than the cards that Jeff sent.

That panel from the 1979 Hostess box bottom that included Gary Carter is just beautiful. Why can't we have even an unlicensed set these days that includes just good, solid photos rather than the overly retouched nightmares that Panini puts out?

Seriously, good photos -- ones where logos are not shown -- can be taken. They can be found.

Of course, I repeat that refrain so frequently that my complaints are becoming an earworm, stuck in my head like so many catchy songs.

Jeff, many thanks to you for the great PWE. I'll have to hit you up with some cards soon.

Okay, one more earworm. I'm positive this video will get pulled eventually, but this song brings back great memories for me too.


Even this kind of upsets me...Fox is remaking Rocky Horror.

Thanks for reading and listening.
Posted by Tony L. at 8:55 PM