Interacting with collectors by way of anything other than face-to-face interaction can have its awkward moments. For instance, when you're way behind on sending out response packages to people, you feel a little awkward interacting with them because you feel like you want to say, "sorry, man, I know, I'm way behind."

Other times, there is some awkwardness when you can't remember who sent you cards. I have solved that problem for myself by scanning the cards as soon as I get them in and then saving them in a scan folder named for the person who sent them to me.

Then, there is the awkwardness I felt recently. I know Twitch of Twitch Collects Cards. By that, I mean, I interact regularly with him on Twitter, watch his creative process in drawing all kinds of awesome sketch cards, and read his insomnia-filled tweets that make me feel awful inside for him.

The fact is, though, that I never really knew Twitch's name or address before getting cards in the mail. Well, I probably did know CC is really Twitch (I mean, I did read Gavin's trade post), but still -- I didn't want to give credit for a package based on a hunch.

To make up for my gaffe, I will first show you some of the fantastic art that Twitch is working on. 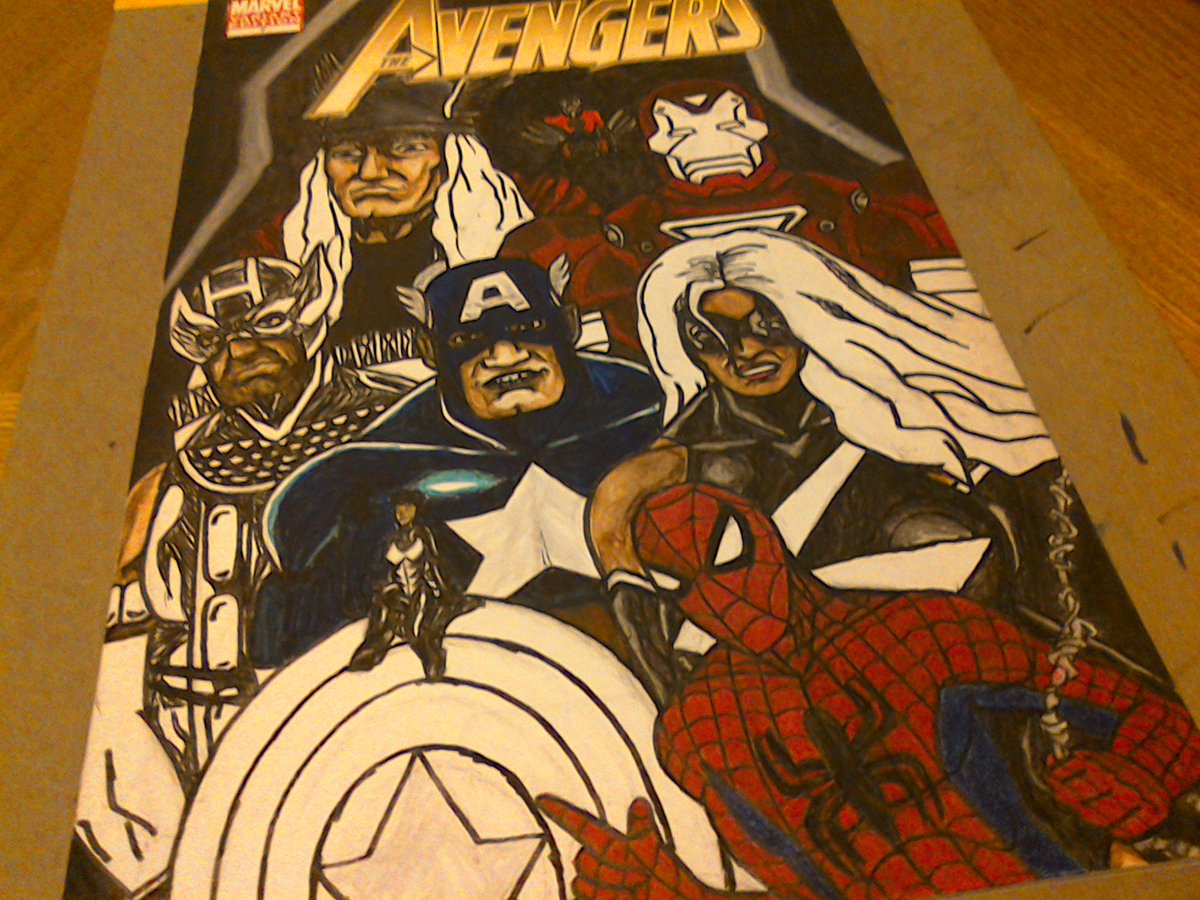 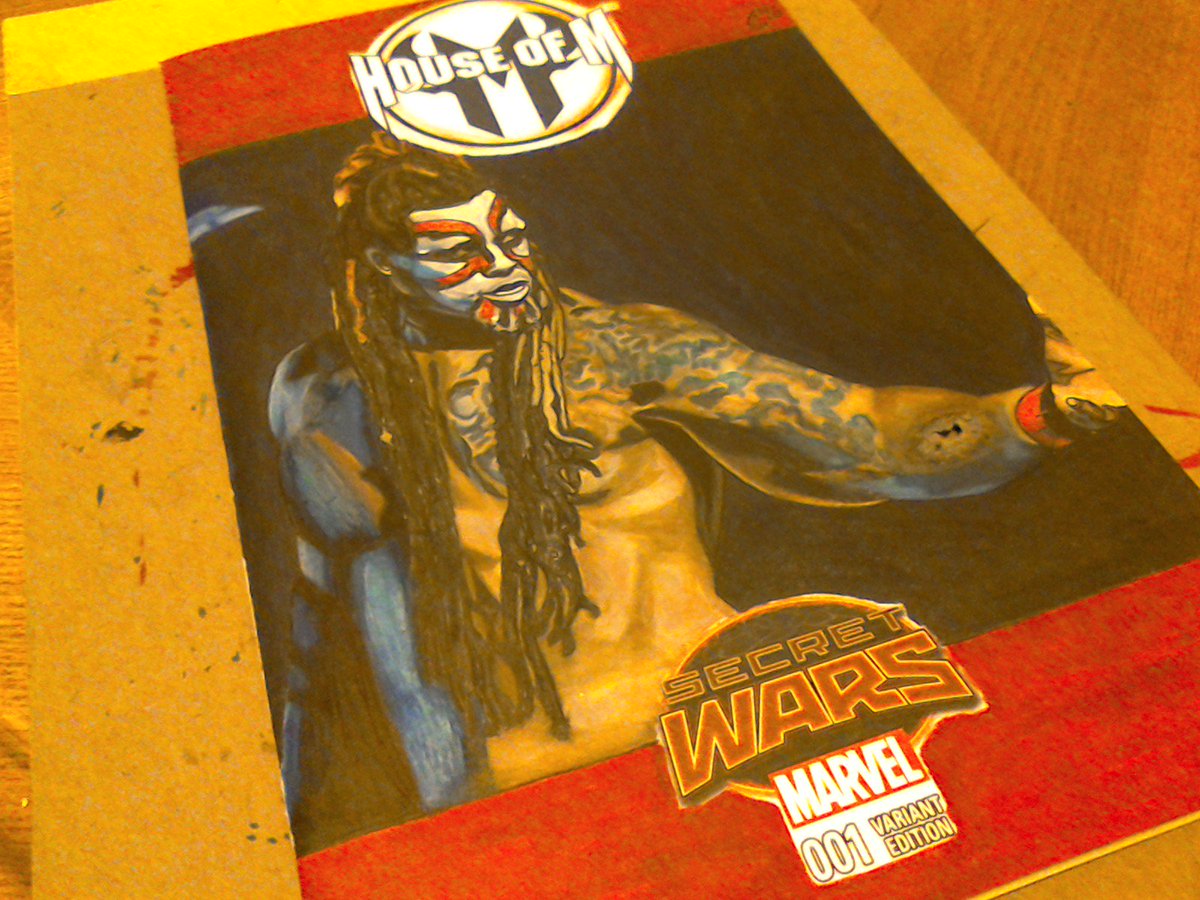 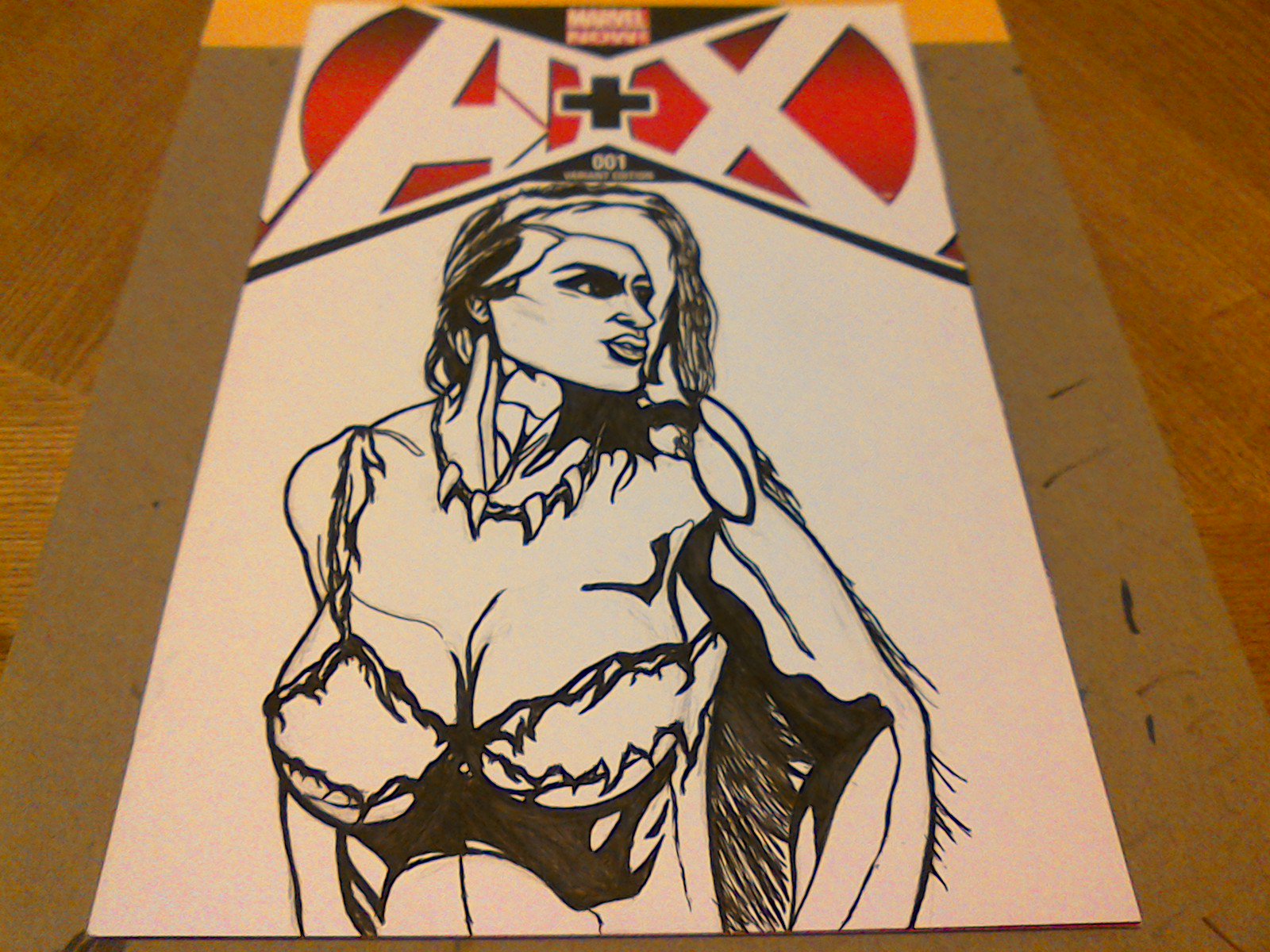 As the hashtag says, you can commission some of these great sketch cards or other items by contacting Twitch via Twitter. This is just the tip of the iceberg on the great art that Twitch is creating. I wish I had even one-tenth of this artistic ability. As best I can tell, my creativity is limited to words.

And, as you probably know if you've read this blog, that is a pretty limited creative streak for me.

Twitch was kind enough to send me a ton of Brewers. I admit that I am now at a loss as to what to send back, but I'll figure that out soon. 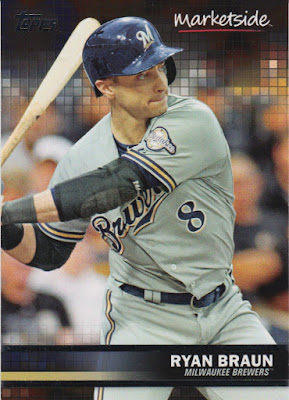 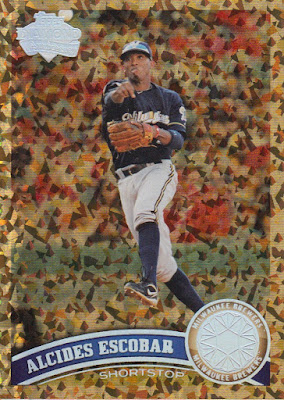 Liquor-fractors and pizza. Yummy. I Googled "Liquor and Pizza" and it turns out that El Cajon, California must be the best place to live in America. I found that Shinar Pizza there allows you to order a fresh pizza, liquor, beer, or wine, smokes (if you're so inclined), or even groceries all at once and they will deliver.

Sticking with shiny and 2011, how about a few of those diamond anniversary parallels? 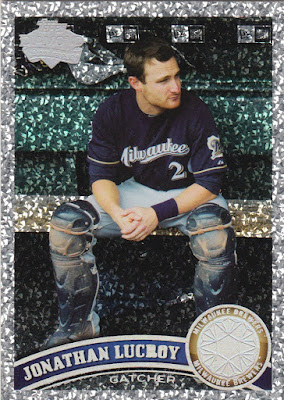 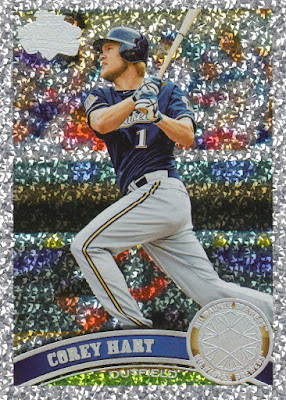 Two player collections for me in Jonathan Lucroy (now at 147 Lucroy Cards/items) and Corey Hart (lagging behind at 103).

As best I can tell, Hart is done as a player. He tried to play last year with Pittsburgh, and he just could not get through all of the injuries.

An interesting sidelight is that there is another baseball playing Corey Hart who is a coach in the Blue Jays organization. He stands 6-feet tall and has a shaved head (as opposed to the 6'7", shaggy haired outfielder).

Perhaps appropriately for Twitch's art is this story in which Craig Calcaterra talked to OF Corey about his extensive superhero action figure collection! 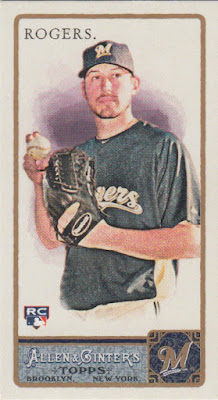 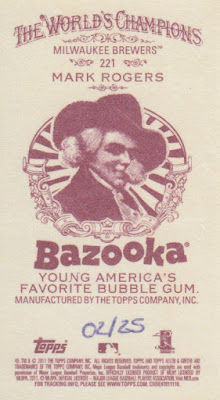 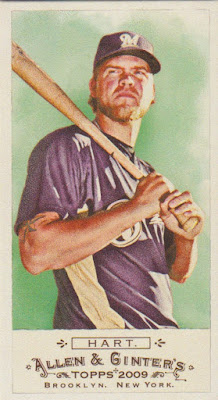 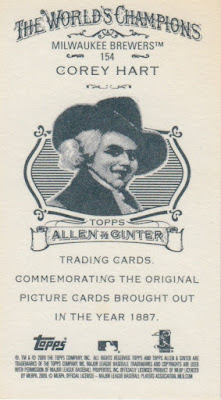 Rogers is the rare Mainer major leaguer. I don't know if he is still pitching now (he tried and failed to catch on with Texas in 2015), but he pitched last year in the Independent Atlantic League for Long Island and Bridgeport with not a whole lot of success (39 innings, 6.23 ERA, 25 walks, 9 HR allowed). At one time very early in his career -- based entirely on being the 5th pick overall in the 2004 draft, almost certainly -- Rogers was the 55th and then the 44th best prospect in baseball according to Baseball America in 2005 and 2006 respectively.

Then injuries caught him. Remember everyone and repeat after Baseball Prospectus: There Is No Such Thing As A Pitching Prospect.

Rogers was smart and invested his bonus money wisely, according to this Portland Press Herald article. So, he's financially okay. But, Rogers really was a guy who never lived up to his high draft pick status. 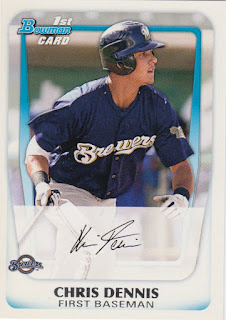 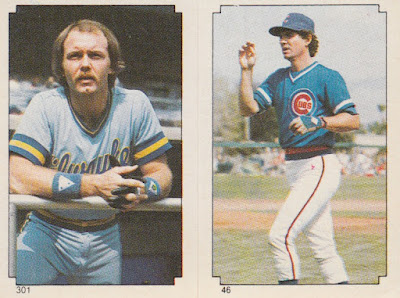 On the left is Chris Dennis. Dennis was born in Windsor, Ontario, and was drafted by the Brewers in the 13th round of the 2007 MLB Draft from St. Thomas of Villanova High School in LaSalle, Ontario. He got as high as High-A Brevard County in 2011 before he couldn't keep up enough with his bat (in 96 plate appearances, he slashed .169/.274/.253). I don't know where he went from there -- perhaps he decided to go to college or try something different since, after all, he was 23 at the end of 2011.

On the right is a 1984 Topps Sticker of Larry Bowa. But ignore that. The important guy is the one in the middle -- Birmingham, Alabama, native Charlie Moore. While Moore was pretty much done as a player in 1987, it would have been nice for him to get to stay in Milwaukee for his final season in the majors rather than ending up on Chris Dennis's eventual stomping grounds in Ontario. Moore made it to the majors in 1973 at the age of 20, but he played over 120 games in a season just three times -- 1977, 1982, and 1983. 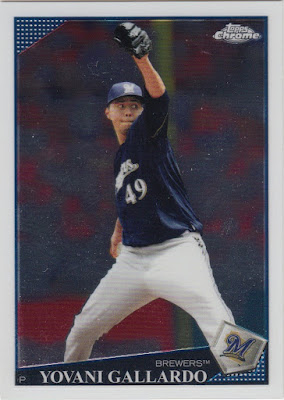 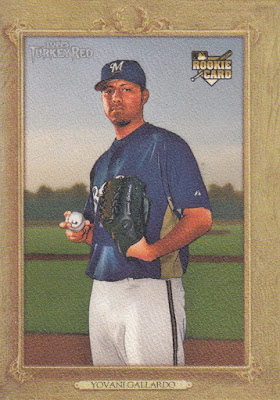 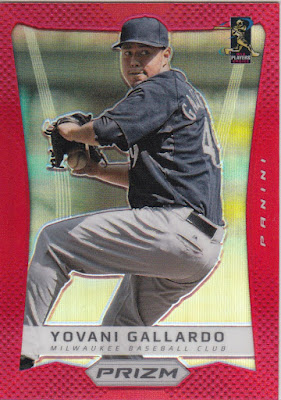 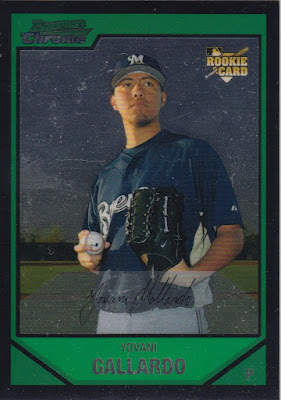 It's Yovani Gallardo times four -- three shiny cards (two chrome and one "Prizm") and one Turkey Red. Gallardo signed in the offseason with Baltimore to a two-year, $20 million contract with a $13 million team option for 2018 or a $2 million option buy out. Gallardo hasn't pitched much this year for Baltimore thanks to injuries. He'll get every opportunity to claim a rotation spot there, though.

These cards helped push my Gallardo collection up to 153 cards. 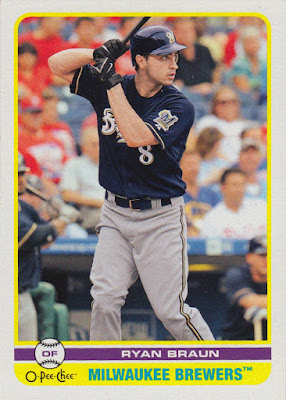 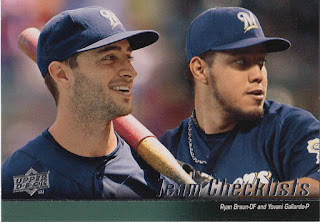 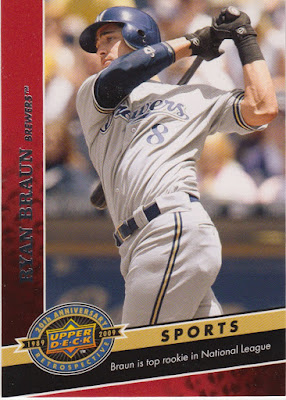 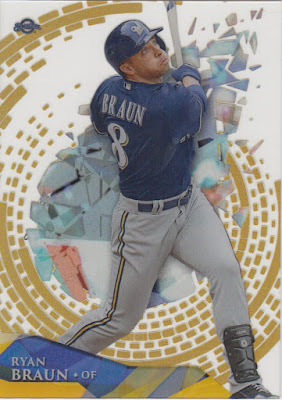 For me, it's always good to add to my ever-burgeoning Ryan Braun collection. The first one is the base "O-Pee-Chee" (put in quotes in deference to the fact that, well, these cards are just Upper Deck in O-Pee-Chee name with a wannabe 1976 Topps look) from 2009. The next actually goes in my 2010 Upper Deck team collection. The "20th Anniversary" card is one I needed too -- even though I have one that looks almost exactly like it already, I still needed it. Finally, that fancy Topps High Tek thing from 2014 is actually a "Spiral Bricks Gold Diffractor" and it is serial numbered as number 22 of 99.

Thanks to this infusion of Brauns, my Ryan collection has now reached 564 different Ryan Braun cards/items.

Twitch, many thanks for the great package of cards -- to be fair, there were at least 10 more cards I could have included here. 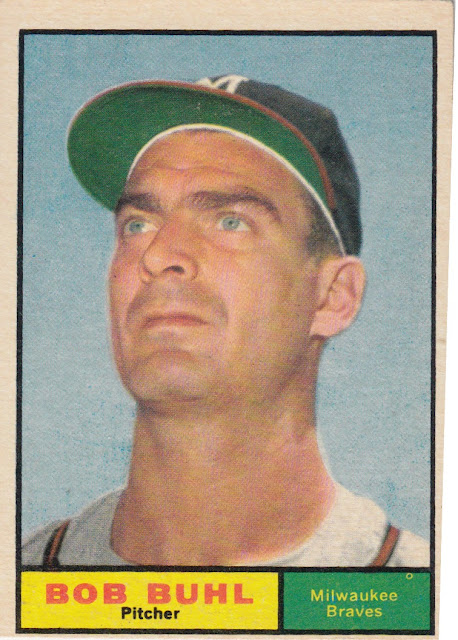