A Little Bit of eBay in My Life f/Robin Yount

Yes, more eBay purchases. My apologies to all of you for what is about to happen. If you didn't get where this is going, musically, well, it's not good.

You see, I like playing trivia on Sporcle. It's a good unwind for me when I don't have it in me to interact with other people on Twitter or Facebook or some other medium. It's got a badge-collection game within a game that appeals to me as well. What can I say -- I'm a collector.

Anyway, I accidentally ran into this quiz -- naming all the Mambo No. 5 girls from Lou Bega's earworm song of the same name:


The good thing that getting this damn song stuck in my head did was lead me to Google "Worst Earworm Songs of All Time." It led me to a C|NET article that said that Mambo No. 5 was determined scientifically to be the second catchiest song of all time. What were the other catchiest/songs that people could identify most quickly?

Let's find out by looking at some Robin Yount stuff I've bought on eBay recently. I'll spare you all of the 20 songs from the earworm list, but here are 5 more from that list:

Is it weird to look at a dolled up teenager showing off her midriff the way Britney did in this video and think, "Oh, that's the sweet innocent Britney..." and then have your mind go to this fact: the song was released on October 23, 1998, and it is now older than Britney was when it was released. 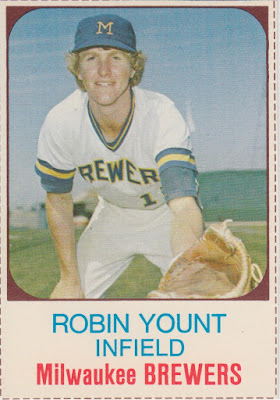 Just like this card has to make Robin Yount feel old. It came out in 1975 and pictures Yount when he was slightly older than when Britney released her song. I have a confession, though -- I bought this as part of the entire panel and cut up the panel. Seriously. I have the panel already in my collection, and, to be honest, the cost for this panel was not super high. I didn't feel bad and still don't feel bad.


Karma Chameleon was such an earworm that my little brother -- who was about a year old at the time -- would repeat the "Karma Karma Karma Chameleon" part over and over. It apparently got stuck in his little year-old head. I don't think he had the opportunity to see Boy George prancing around ostensibly in 1870 Mississippi, though.

Let's be clear: if Boy George really were in 1870 Mississippi -- hell, 1984 Mississippi even -- he would have gotten the crap beaten out of him. I mean, when I was at Vanderbilt in the early 1990s, people at Ole Miss were a long way from admitting that they needed to stop using the Rebel Flag as a university symbol.

Seriously -- this discussion is still ongoing at Ole Miss. In fact, as that article points out, even the school name "Ole Miss" is a reference to a term slaves used when addressing the wife of a plantation owner.

I recall one of our African-American football players at Vanderbilt -- Carlos Thomas was his name -- called out the Rebels and said that he hated Ole Miss because of the Confederate ties. While that football team was not great, Carlos and ten of his football-playing friends eventually ended up being featured in a book about their experiences at Vanderbilt and in life that his friend Derrick Gragg wrote called 40 Days of Direction: Life Lessons from the Talented Ten. Carlos got his doctorate in business from LSU.

Vanderbilt: we play football in the SEC, but our football players are smarter than yours. Well, except for Jordan Rodgers, Mr. Bachelorette Contest.

And wow, did that stray from Culture Club. 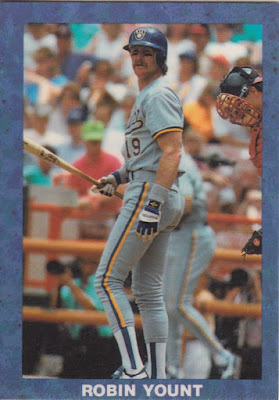 As a reference to the early 1990s and late 1980s, let's look at a glossy Broder-type completely unlicensed card. I got this cheap, to be fair. Part of me really wonders how different all those unlicensed Broder cards from the late 1980s really are from the great customs that folks around the internet have created. Well, except for the fact that the ones available today are far better designs than anything those Broder guys came up with. This card isn't a bad design -- but it's just kind of boring.


I really did not like this song as a kid. I think it was the combination of being a total earworm and that the local Top 40 station played the song about once every 12 minutes. Of course, I hated the Thompson Twins more, so at least this song was more palatable than "Doctor Doctor" or some other crap like that. 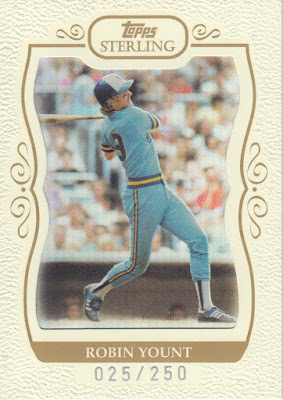 I feel like Topps and its high-end cards -- its neverending conveyor belt of Triple Threads, Museum Collection, Dynasty, and before those, this brand called Sterling -- are sort of like this Human League song. I mean, I really don't like Dynasty and its $400 a pack cards and, unless I win the lottery (which I don't play) I will probably never buy those. But that serves to make cards like this Sterling and some of the Museum Collection base cards seem much more palatable.

I wonder if this song was super popular around the time that the earworm study was done. I mean, it's catchy and all, but I don't feel like it hit the level of ubiquity that songs like, say, "Call Me Maybe" hit. Yet, there it is on the list and Carly Rae Jepsen wasn't.

Of course, as I write this, I listen to the songs that play after I find the videos on YouTube to embed here, and I'm finding this song implanting itself in my head like that ear bug in Star Trek II: The Wrath of Khan did in Chekov's head.

AAARRRRRGGGGGHHHHHH make it stop please make it stop it hurts I promise I'll be good just get it out......... 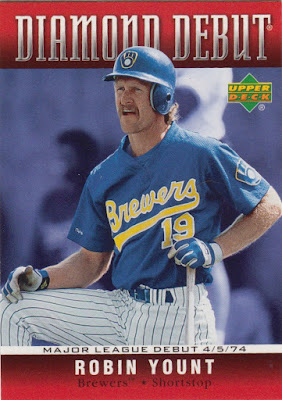 So, I'd never seen this insert at all anywhere before. I snapped it up when I did see it on eBay as part of this group of items. It's apparently from 2006 and was a regular Upper Deck Insert only in Fat Packs. This one, numbered DD82, was in Series 2. The overall odds of getting one of these (according to Baseball Card Pedia.com) was two in every pack. So, perhaps this is sort of hard to find, and perhaps it is not.

I mean, I found Baby Spice (the blond, a/k/a Emma Bunton) and Ginger Spice (the redhead, a/k/a Geri Halliwell) more attractive than the other women in the group. Then I found out that Geri Halliwell had been a Page 3 girl in her past and thought, "well, there's your slutty!" And the fact that I liked the youngest of the three -- at the time, Emma was just 20 years old -- probably was a reflection of the fact that I was in my first year of law school and was hanging around college bars in Athens, Georgia...a city filled with incredibly attractive 18-24 year olds.

Of course, David Beckham found Victoria Adams a/k/a Posh Spice to be to his liking, and she wasn't bad either. There were times when she appealed to me as well -- I guess those were my "serious" times, right? 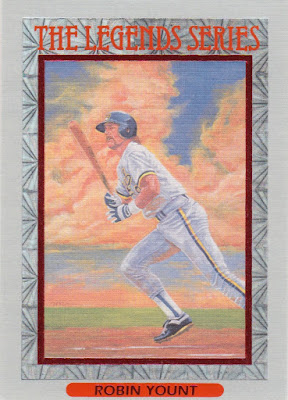 Appropriately for a 1990s song, this Legends Series card from Donruss -- rare in its day as being serial numbered to only 10,000! -- caps off the Robin Yount eBay extravaganza. I'm at 919 Yount items with these added in. I doubt I'm getting to 1000 by the end of the year, as was my goal earlier this year. I'd have to find a rich vein of Younts somewhere for that to happen.

All this discussion about the Spice Girls makes me wonder though: could picking out your favorite set from, say, 1996 when that Spice Girls song came out tell us about what kind of collector you are? So, if you were really into that Emotion XL set, does that say you collect emotionally? Or if you thought the best set of 1996 was Stadium Club, does that make you some sort of highbrow? Were King-B Discs sort of the hipster's set of the year?

Tell me -- who was your favorite Spice Girl? Or, are you too young/old to have cared?
Posted by Tony L. at 8:47 PM