Writing all the time is not easy. This is especially true when the writing being done is blogging. It is legitimately difficult to come up with new or different or at least interesting topics or angles or themes for blogs. New voices can be lost in the wilderness or missed entirely. Voices that have been with us for a while lose their enthusiasm, though thankfully they have not left entirely.

For others, life gets in the way. Some folks sign off for a while because they move. Thankfully, Robért at $30 a Week Habit has come back, though posting much less frequently. Others shutter up shop completely only to return in yet another excellent new form.

Still others get new jobs that prevent regular updating. I'm still waiting for Julie from A Cracked Bat to emerge from her slumber, for instance, and I hope she's still collecting and reading.

I was at that point back in late 2014, as I transitioned away from the massive law firm I worked for then to now working in a small firm more for myself. The fall is tough for me generally with college football thrown in too.

Another blogger who has seen his energy and time taken up with a new venture in life is regular commenter Mike from Not Another Baseball Card Blog. Mike is kind enough to comment frequently on the drivel that I post here, often ignoring my horrible non sequiturs and providing insight on Canadian cards that only an Ontarian can provide. I look forward to those comments.

Mike was kind enough to put together a sweet package of cards to send my way. To accompany these cards, let's talk about Mike's homeland about which he is rightfully proud.

Thank you, TripAdvisor, for that fun fact. I mean, all you need to do to see that Ontario is huge is to look at a map. It stretches from almost all the way to Montreal almost due north of New York City all the way to the oddity that is the Lake of the Woods north of Minnesota. Interesting side trivia tidbit: Lake of the Woods features several islands and two peninsulas (Elm Point and Angle Township) which can only be accessed by boat if you do not want to leave the United States. 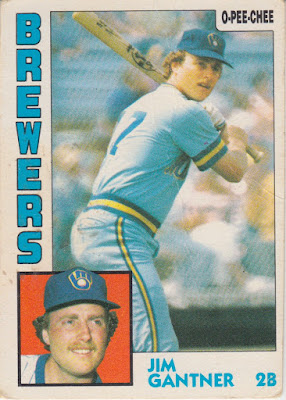 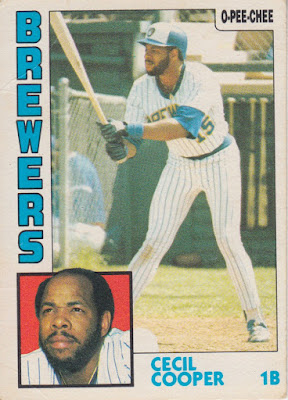 To accompany the Lake of the Woods and the huge size of Ontario, let's go straight to O-Pee-Chee from 1984. I live so far south that finding O-Pee-Chee is like seeing Ogopogo/Naitaka (an alleged lake monster that some call the Canadian version of the Loch Ness Monster), so I'm always psyched to see the OPC.

2. Until 1999, a popular misconception was that Yonge Street was the longest street in the world.

Yonge Street starts on the shores of Lake Ontario in Toronto about two blocks east of the Air Canada Centre. The reason that I say it was a misconception is that Wikipedia said so -- that Guinness mistakenly gave credit to the rest of Ontario Highway 11 as being part of Yonge Street. Seen that way, the road would have been 1,896 km (1,178 miles) long. In reality, it's just 86 km/53 miles. 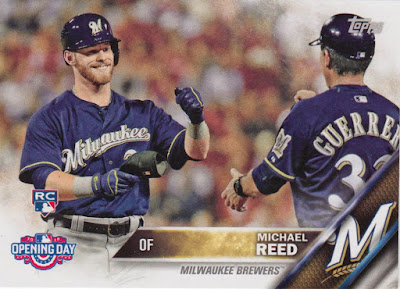 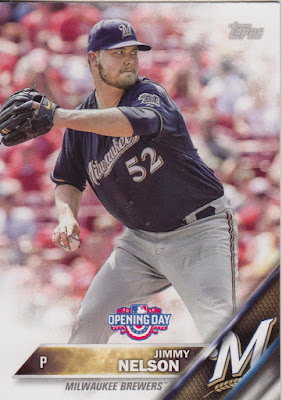 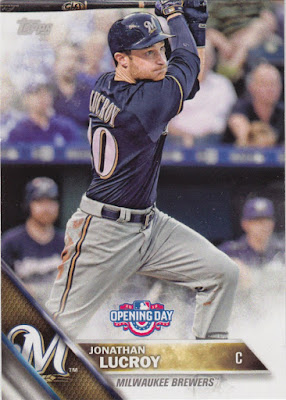 Fitting the realm of being something of a mistake are Topps Opening Day cards. Don't get me wrong -- I like the general idea of the Opening Day set, with its limited number of parallels and not being driven by hits. Its problem is well documented, though -- it's the same card as the Topps Flagship, making it just another lazy parallel rather than being something cool and different.

The problem is, though, how lazy Topps has gotten with its exclusive license. I doubt that will change any time soon.

3. Ontario is Canada's most populous province with over 13.5 million people -- about 40% of Canada's overall population.

Most people live along Lake Ontario -- from Brantford to Kitchener through Brampton and Toronto and all the way east to Peterborough (Mike's hometown). This "Greater Golden Horseshoe" area (I didn't make that title up -- the Ontario Provincial website did) has more than 9 million of the 13.5 million people in Ontario.

Outside of that area, Ontario is probably about as populated as Alaska is outside of Juneau and Anchorage. Including everyone in the equation, Ontario has approximately 32.5 people per square mile (sorry, using miles here for ease of comparison). If Ontario were a U.S. State (no jokes, folks), it would be less densely populated than Kansas and Utah and would rank 42nd overall -- ahead of Nevada, Nebraska, Idaho, New Mexico, South Dakota, North Dakota, Montana, Wyoming, and Alaska (which has 1.3 people per square mile).

In terms of pure size, Ontario is still dwarfed by Alaska -- in fact, the difference in acreage between Alaska and Ontario is nearly equivalent to the area in the State of California (about 155,000 square miles) but it would be second overall. One more odd comparison: the difference in square mileage between Ontario and number 3 Texas is 154,366 square miles -- again, nearly the size of California. And yet, between California and Texas, there are over 67 million people. 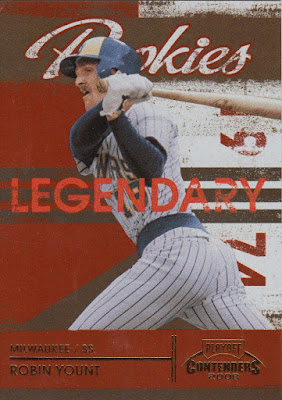 That got a little too into the weeds for most of you, I'd bet, but stuff like that kind of fascinates me. My weird, trivia-filled head thrives on crazy information like that in a way that my collection thrives on receiving great serial numbered cards like this one from people. It's actually my third one, but since all three are serial numbered, they all count as separate cards in my Yount Collection, which has ballooned to 910 as of Saturday. I still need 90 more new items to get to my goal of 1000 by the end of the year, though.

4. Newfoundland is where the first Europeans settled in North America -- around the year 1000.

I know most of you are educated sorts such that you realize that Christopher Columbus's "discovery" of America was less like discovery and more like finding a new restaurant because you took a wrong turn, got hopelessly lost, and ended up stopping because otherwise your partner would kill you. I think most people understand that the Vikings -- perhaps an offshoot from Vinland under Leif Erickson around the year 1000 -- came and settled at a place now called L'Anse aux Meadows. 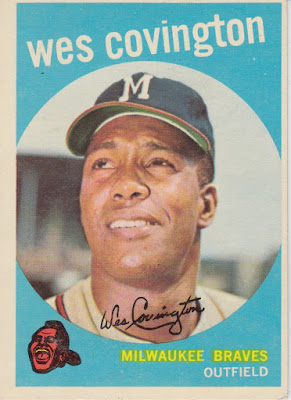 While not a good analog in anyway, I think this 1959 Topps Wes Covington is a worthy way to finish out this fantastic envelope of cards from Mike.

I hope some day to visit L'Anse aux Meadows where the first settlement is located. It's at the very northern tip of Newfoundland and it's truly a place that is difficult to reach -- basically, it's at least two or three flights even from a major metropolis like Atlanta, and even flying into Deer Lake still puts you nearly 5 hours away driving.

I guess R.E.M. had it right, though. You really can't get there from here:

Mike, thanks a ton for these great cards. Sorry I didn't choose Canadian music to go with this post, but this R.E.M. song leapt into my head!
Posted by Tony L. at 8:25 PM