I Wanna Baseball All Night

Peter from Baseball Every Night has been extremely generous to me. Hopefully, my latest envelope that was sent to him -- now, for a second time...thanks USPS! -- gets to him so that he can drink in all the Strawberry cards I've sent to him.

Of course, with the title I've used here, there can only be one theme song for the second batch of cards Peter sent my way last week:

Here's the setup: the past two years, I have come out of the gate rockin' when it comes to collecting the Brewers for the Topps flagship set. By that, I mean that both in 2015 and 2016, I bought into case breaks for Series 1 and ended up with about a dozen of each of the base cards, about a half dozen of any inserts, and even a relic or two.

By the time Series 2 rolls around, though, I miss it. I don't even notice it. Series 2 sneaks out into the world like the stealthiest of leopards, unleashing itself on an unsuspecting collecting public.

Or, at least unleashing itself on me.

I mean, I think I still need a Jason Rogers from 2015 Series 2 at this point. Seriously. I haven't found one at my local show, and no one has sent me one either. I mean, I'll probably just end up getting it eventually if it doesn't show up, but that is pretty indicative of how Series 2 usually treats me.

Since that first song got me in the mood, how about a KISS-powered post to go with the 2016 Topps Series 2 cards that Peter sent my way?

Perhaps the most appropriate KISS song for the 2016 set -- I'll call it forevermore the "smoke" set -- this song from Animalize (which I owed and may still own on a 33-1/3 RPM record):

Let's go for the basic ones first: 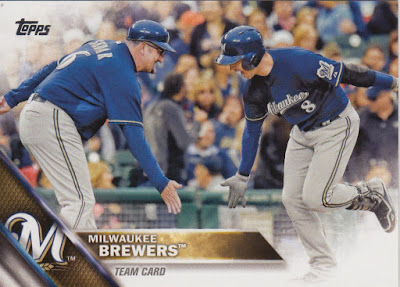 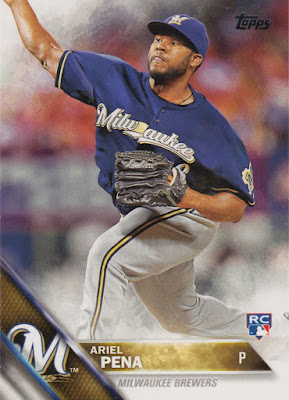 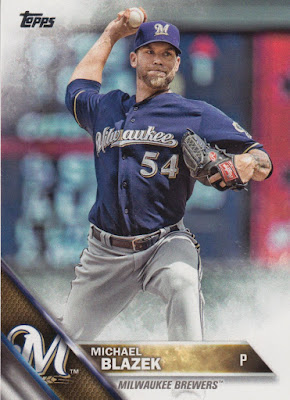 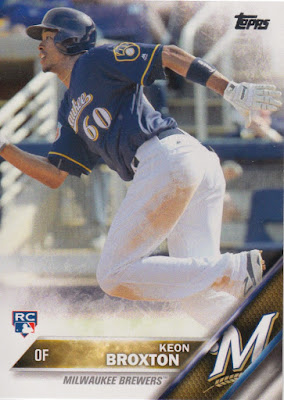 That top card -- the Brewers Team card -- features Ryan Braun giving third base coach Ed Sedar a low five after hitting a homerun and passing third base. I'm now tied up in knots thinking of all of the terrible Passover puns (pass, seder/Sedar...) so I'd best move on.

Ariel Pena lasted one outing with the Brewers this year to start the season before getting sent to pitcher's hell, er, Colorado Springs. Interesting trivia tidbit: Colorado Springs is the highest elevation stadium featuring professional baseball. It's a full quarter mile higher in elevation than Coors Field. The Brewers ended up with a Triple-A team there thanks to the classless organization that is the Nashville Sounds -- which used the Brewers to get a new stadium built then promptly changed affiliations.

Michael Blazek just returned to the bullpen from the disabled list. He's the rare player who started in St. Louis, left, and got better instead of worse!

Finally, Keon Broxton suffered one of the worst starts to a major league career that I could imagine. He went 0-for-2 last year with Pittsburgh, then went 0-for-16 to start the season this year with Milwaukee. He got sent down on April 16. He came back on May 20, and he went 0 for his next 6 before finally picking up his first major league hit in the 13th inning against the Atlanta Braves on May 25 (and giving Michael Blazek the win). Broxton's big problem so far is making contact. In 71 plate appearances, he has struck out a ridiculous 33 times. That is no way to make a major league career take off.

Okay, we need some help to get through these next cards...


How about a little Cold Gin?

To be fair -- and I'm sure to the chagrin of at least a couple of you -- I'm not a huge KISS fan. This is probably the first time I've heard this song. It's not awful. It's okay. It's too repetitive in the guitar licks for my taste, though. 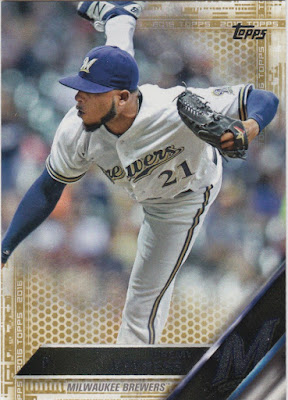 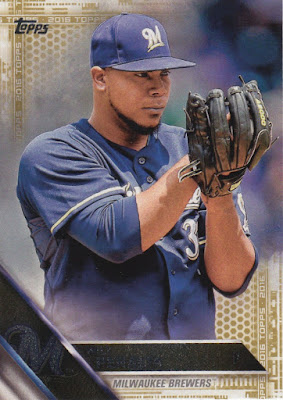 Peter sent me a couple of gold parallels as well. Topps has been doing these gold parallels for what -- fifteen or sixteen years? They are okay, I suppose. It's sort of like that guitar in Cold Gin.

These two cards are of two guys having very different seasons. Jeremy Jeffress wasn't the experts' pick to be the closer this year -- Blazek, perhaps, might have been, or Will Smith, or maybe even Tyler Thornburg. But Jeffress ended up being the guy coming out of spring training almost by default being the only one healthy and pitching well. Lo and behold, as of June 27, Jeffress is in fifth place in the NL with 21 saves in 22 opportunities. Not too shabby.

I need a pick me up now.

At least it is an uptempo song. The more I listen to old KISS, the less I like it, to be honest. I know -- sacrilege, right? But the music is kind of...mediocre. Sorry guys and gals who have devoted your lives to KISS -- basically they are an average band with a great gimmick.

I'm probably wrong about that, so please -- attack me at will for that comment in the comments below. 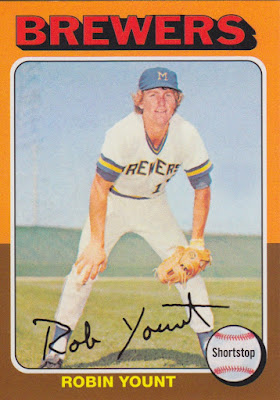 Speaking of repetitive and mediocre, I sure am glad that we have our 948th version of Robin Yount's rookie card making an appearance in the Berger's Best/Cards your Mom Threw Out/whatever the excuse is this year insert set. I think the real reason this is in the Series 2 inserts is to make up for the typo in Series 1 which said this card was from 1974.

Of course, it also said that the mini 1974 version was highly sought after. And that is so true. I am still looking for it.

Peter -- thank you again for the great cards, and I hope that KISS isn't one of your favorite bands since all I've done here is call them average, mediocre, repetitive, and gimmicky.

Then again, I'm a baseball card blogger. What do I know about gimmicky or being repetitive?
Posted by Tony L. at 9:15 PM