When I was in college, I was worried that being a lawyer would be boring. Not for the obvious reason that, in reality, it is boring with regularity just like almost every other job in the world.

No, I was concerned it would be boring because it seemed like all the important stuff had been litigated already, everything had been decided, and all that was left was to pick around the scraps.

Now, I know that picking around the scraps is both fairly lucrative and a lot more interesting that I would have thought otherwise. The fun is in the areas of difference. As a lawyer focusing on construction matters, nearly every fact pattern is different. Each prior case gives context to the advice I give to clients going forward. Sometimes you have to trust your gut instincts, and other times you have to ignore those same gut instincts.

Weirdly enough, I think this love of variety fits my collecting well. My instincts tell me that I'll never be able to collect every Brewers oddball or even every Brewers card. It just isn't possible. But, I can't stop trying.

That is what drew me to a very different eBay listing -- one for the 2009 Milwaukee Brewers Micro Magnet set sponsored by Time Warner Cable. 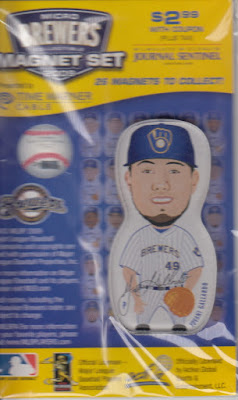 That's Yovani Gallardo behind plastic there. I bought a complete 2009 set of these magnetic Brewers for a total of $20 -- $15 for the set and $5 for shipping (and shipping actually cost $7.75 for postage alone...).

The Venerable Thorzul mentioned how these worked back in 2009. Basically, the Milwaukee Journal Sentinel newspaper had coupons in them for people to take to their local Pick 'N' Save food store and hand over $3 with the coupon to get the little magnet. The cost of these was partially underwritten by Time Warner Cable. You can see the official sticker of Major League Baseball next to Yo's head there -- it's a fully licensed product.

Before tonight, I'd never heard of The Magnetic Fields. My loss.

Anyway, here are a few of the other magnets from the set: 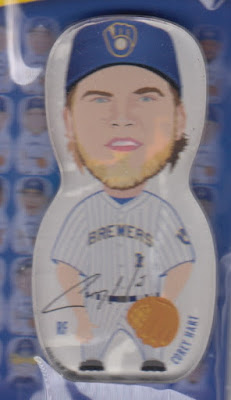 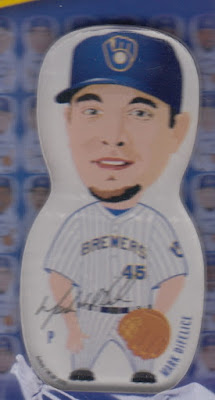 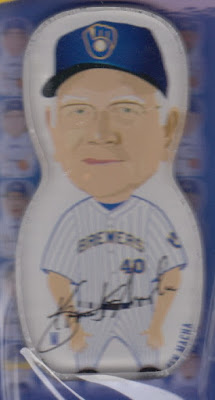 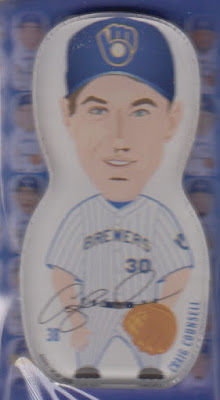 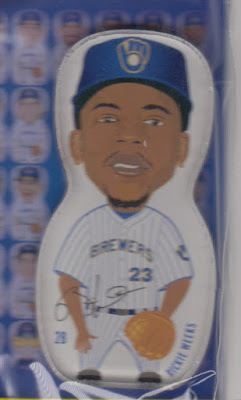 As a side note, this may be the only time I ever get to mention Mark DiFelice. Other than this magnet, the only evidence that Mark DiFelice ever played in the major leagues is his 2009 Milwaukee Brewers Police card (which I may own already, oddly enough). DiFelice -- who does not appear to be related to former catcher Mike DiFelice as best I can tell -- was drafted out of Western Carolina in 1998 by the Colorado Rockies. He went to the Orioles system next for the 2004 season.

The Orioles didn't kept him, so he signed with the Washington Nationals. In 14 appearances in New Orleans in 2005, he got annihilated -- 30 innings of 8.40 ERA (10 HR allowed in 30 innings!) -- and washed up in the Atlantic League. In 2006, it was the Mexican league and the Atlantic League. His work there led the Brewers to take a flyer on him in 2007.

He pitched incredibly well in Double-A and Triple-A, and, in 2008, he made his major league debut in Milwaukee at the age of 31 on May 18. He stayed with the club for a month, got sent down, and then was recalled for September in the middle of a pennant race. He pitched well in 2009 -- making 59 appearances for the team and striking out 48 in 51-2/3 innings.

Then, at the age of 33, he underwent shoulder surgery and missed the entire 2010 season. That would have stopped most pitchers, but he came back to make three forgettable appearances with Milwaukee in 2011.

These days, our pal Matt at Bob Walk the Plank should go hang out with him. Mark is the Pitching Coach for the West Virginia Black Bears. And, anyone who is a fan of baseball should read the little blurb Mark has written on his LinkedIn page -- he gets it.

So, that's more information on Mark DiFelice than I have ever heard or written before. Since it will be approximately 20 years before I get to him in the "Meet the Brewers" series, perhaps that will be all I ever write. But man, just reading that ride through the minors...you can feel the guy's determination coming through.

And that's why having oddballs and card sets that get all the players are really my favorite things to collect. It's the stories.