Weird Al's parody of the Backstreet Boys' "I Want It That Way" is far too accurate, even down to the reference of sniping the auction with 2 seconds left on the auction. Yeah, we've all done it to some extent or another, I think.

That's my way, though, to bring up more eBay wins I've racked up. For some reason, I'm finding myself going down a Weird Al vortex this post. 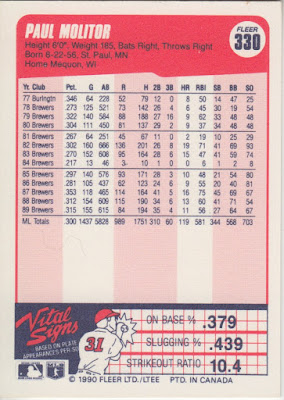 I'm showing the back and not the front because it justified me spending $1.25 on the card. It's my first 1990 Fleer Canadian card, so it justified the cost.

Much like the use of Force can make people do things and think things that they may not otherwise do....

I find myself bidding almost indiscriminately at times on Milwaukee Brewers Police cards. This time around, I purchased two different sets from the Milwaukee Police Department that I did not have -- the 1998 and 1999 sets. The cooler thing is that, as I found out when the cards arrived, I had purchased them from an industry legend -- Bob Lemke. 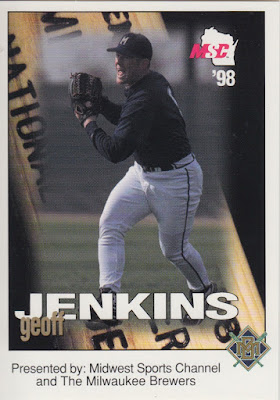 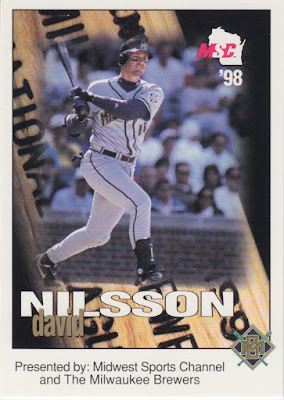 Those are the 1998 cards, and, as you can see behind Jenkins & Nilsson, the cards celebrate the fact that Bud Selig ramrodded through the change from the American League to the National League to satisfy his own childhood fantasies. 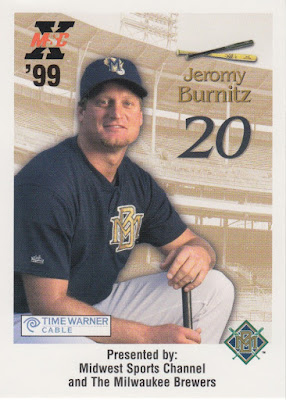 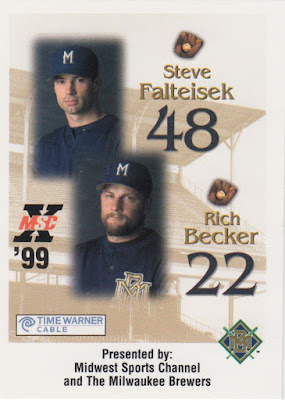 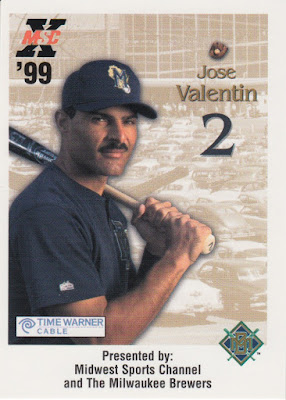 The 1999 cards have backgrounds that celebrate the closing of Milwaukee County Stadium, which was supposed to happen in 1999 but had to be delayed.

So, speaking of strange/weird/odd, let's talk a bit about Steve Falteisek. Falteisek is almost exactly one month younger than I am. Falteisek was born in New York, but was a good enough baseball player to get a scholarship to attend the University of South Alabama. He was drafted by the Montreal Expos in the 10th round in 1992 and signed almost immediately.

As is clear from his minor league record, he was never a strikeout pitcher -- and therein was his downfall. He made 10 appearances for the 1999 Brewers at the age of 27, allowing 18 hits, 3 HR, 3 BB, and 10 earned runs in 12 innings. The Brewers released him at the beginning of September in 1999, and from there he bounced in and out of major league organizations until 2003, when he called it a career. I think I found his Facebook page; it says he works for American Airlines, and it looks like he has a lovely wife and two adorable children.

It's tough being a grammar fascist -- as I tend to be -- and then I reread my own posts and see stupid typos and errors. Ugh. How embarrassing. 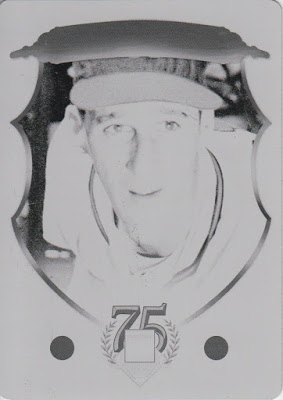 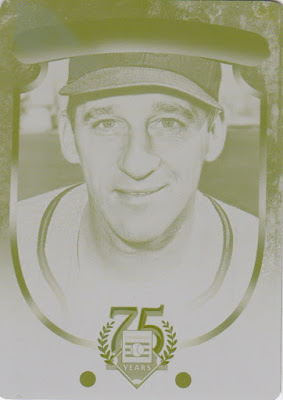 I'm thankful for people who don't spell check or realize their mistake, though, because I benefited. Neither of these printing plates from the 2014 Panini Cooperstown set cost me more than $12.

I cannot think of anything more appropriate for a blog about Milwaukee baseball cards than a polka song. And this one, well, it's just plain awesome!

So what awesome win do I have to go with that? 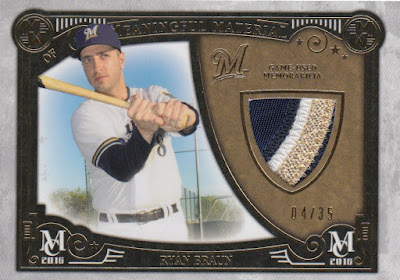 Everyone's favorite Brewer, Ryan Braun, had this Meaningful Material card in the 2016 Museum Collection Set. This nice three color patch part is serial numbered 4 of 35, and it cost me exactly $10 with shipping. That might be about $5 more than I should have paid for it, but I put my bid at exactly $6.01 to match the $3.99 shipping and, lo and behold, I have another Braun.

Finally, it's a song about everyone's favorite celebrity gossip website TMZ. I hate TMZ for its part in the A.J. Green Jerseygate suspension. TMZ reported that A.J. attended an agent's party at the Fontainebleau Hotel in Miami over Memorial Day in 2010. It was a complete fabrication. A.J. was never in Miami, but it led the NCAA to ask him about the trip. He said, basically, I wasn't there -- just look at my bank records. No one at UGA (*cough* Mark Richt) counseled A.J. about why this was a bad defense. What happens then? The NCAA finds a $1000 payment for a jersey that A.J. sold.

Anyway, I need something to get me in a far better mood, and that song just brings up bad memories. 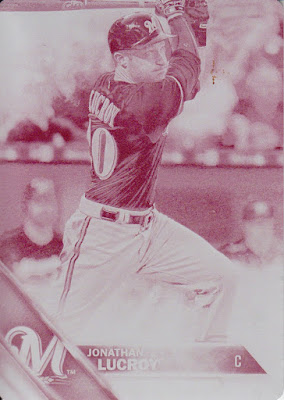 So, now I have three of the four printing plates for Jonathan Lucroy's 2016 Topps card. I bought the yellow and the black plates back in February when the Flagship first came out. All I need to find now is the cyan plate.

Three out of four printing plates is a pretty cool thing to have. But, four out of four would be even better. Hopefully, I'll find it on eBay...soon.