Cards from a New Blogger at Baseball Every Night

One of the most enjoyable things for me since I started blogging has been seeing people I've interacted with through comments or on Twitter decide to start blogging themselves. I think I have a pretty good explanation for that, too: while writing a blog does take some time, writing is something that most of us have done a lot during our lives for school, work, and even fun. When we can combine a hobby we enjoy with that, it makes for even better reading.

My other theory on this is one I used to calm my nerves before my first bar exam (I've taken and passed three). I looked around at a couple of the attorneys I'd dealt with in the past and thought, well, hell, if that guy can do it, I sure can.

I'm guessing that people reading this blog probably think the same thing. My writing is hardly the enjoyable prose that either Night Owl or Dimebox Nick provide to us. It's much more workmanlike and stream of consciousness than anything.

Speaking, though, of new bloggers that came from the Twitter interaction stage is the new blog Baseball Every Night written by Peter, one of my 12 Twitter followers who isn't a spambot who followed me because I said the word "Norfolk" in a tweet one time in 2014. Peter has the twin loves of baseball and Sylvia Plath's poetry (no, seriously).

Like many of us, Peter collected in his youth for a while before stuffing the cards into a closet in a box and, then, rediscovered the cards recently and got interested again. He's still sorting through his cards, but he happened to find a couple of cards that I needed for my collection in his shoebox: 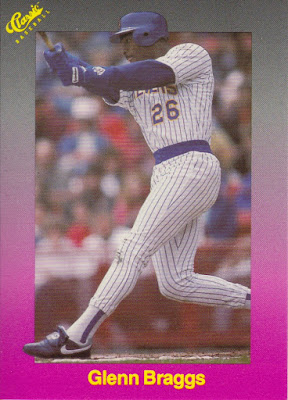 By the way, Glenn Braggs is 53 years old.

Not only is he cut like a Greek god, he's also done well for himself in his personal life too.  He's been married for 22 years to Cindy Herron, who was a member of the singing group En Vogue. Still, through all of that, many people remember him for a strikeout FLY OUT in 1990: 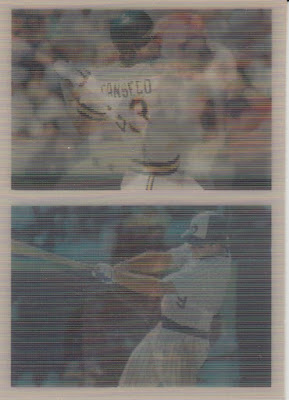 The other card Peter sent is above. If you look closely at this 1986 Sportsflics "Big Six" Rookies card, you'll see Jose Canseco on the top and, on the bottom, a man who may very well be the exact antithesis of Glenn Braggs:  Billy Jo Robidoux.

Where Braggs was a college-educated, chiseled, African-American athlete from Southern California, Robidoux was a high school-edcuated, doughy, white baseball player from Ware, Massachusetts. Robidoux was a year and a half younger than Braggs, but both made their way to the major leagues in the mid-1980s within about 8 months of each other.

Neither was as good as their advanced billing, though, and both were out of the major leagues before their 30th birthday. Braggs went to Japan and looked like a superstar there, whereas Robidoux went back home to Massachusetts and, as of 2010, was working for the Ware Highway Department.

To be fair, both Robidoux and Braggs were a part of the Brewers conveyor line of failed prospects in the 1980s. The Brewers often fooled themselves into thinking that their hitting prospects were far better than they actually were by having minor league affiliates in El Paso and Vancouver/Denver in the heavy-hitting Pacific Coast League.

Add in the fact that the rookie league team in Helena also was located in a very favorable hitting atmosphere, and it left only the Single-A spots of Beloit and Stockton as places to get half of a gauge on what kind of hitters the club had.

Perhaps it is unsurprising that the team fell into the abyss it did in terms of player development by the late 1980s.

At any rate, thank you, Peter, for the great cards. Here's Belle & Sebastian's song "Enter Sylvia Plath" for your listening enjoyment.