An Ode to Justin Bieber

In the baseball card blogging world, getting a Justin Bieber card can only mean one thing: that you have received a card from the fabulous Frenchman, The Card Papoy. 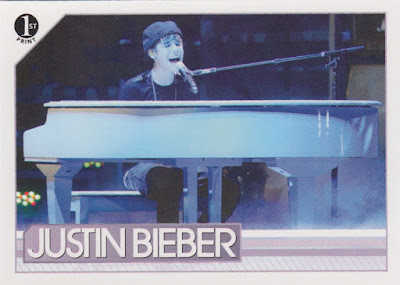 In the past, I've never indulged Mr. Papoy's idolatry of the Biebs. In large part, that's really because I have honestly never listened to a single bit of Bieber's music. Not. A. Note. That's largely because I have never had much use for any of the teenie bopper teen idols -- dating back at least to New Kids on the Block and probably earlier.

But, let's be honest: I'm not the target market for Bieber, or NKOTB, or 98 Degrees, or the Backstreet Boys, or One Direction, or any of those other teen heartthrobs. Middle-aged men are supposed to hate that music -- it's for the kids of middle-aged men.

I'm done fighting Papoy on this though. He wants to keep sending Bieber cards, well, the least I can do is give him an all-Bieber music selection to slog through listen to while reading my thanks for the cards he's sent to me.

Since I have no idea what songs of his are any good to anyone, I Googled "Justin Bieber's best songs." Here's what we get from that:

1. "Where are Ü Now" -- Skrillex and Diplo with Justin Bieber

Skrillex is actually someone I've featured before thanks to Matt F. of Heartbreaking Cards of Staggering Genius being a fan. This song isn't completely awful, but it sure is incredibly repetitive.

Then again, I shouldn't be so hard on repetitive songs, since repetition is the creator of earworms. Like this song. All I have in my head now is "Where are you now that I need you?" 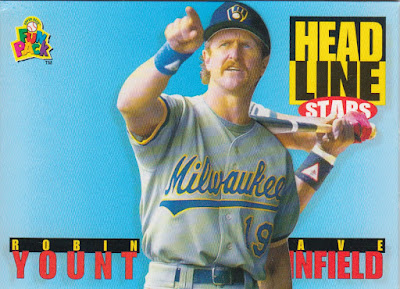 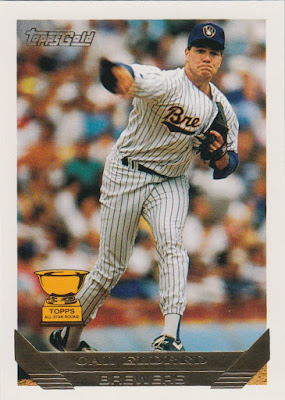 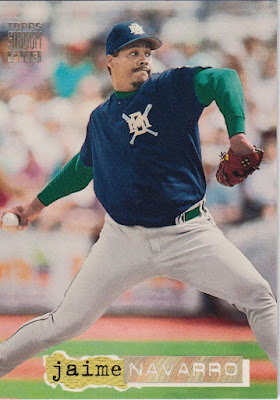 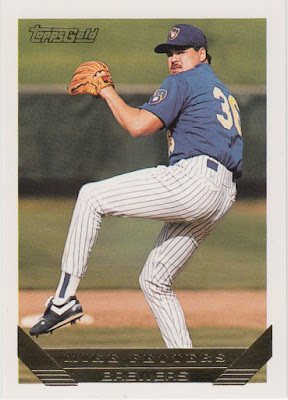 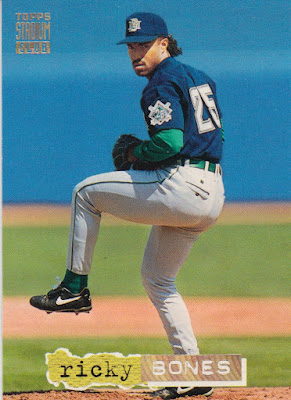 Like any good earworm, the very simple parallels from the 1990s are tough to get out of your head. They are fairly numerous such that they can be found with a little looking, but, for the most part, you don't see them every day. I actually kind of like the Stadium Club Golden Rainbow parallel, even if that name is ridiculous and the nameplates on the front are just...terrible.


This was apparently Bieber's first ever song. The video looks like the Sesame Street version of Snoop Dogg's "Gin and Juice." The fact that Usher is calling up Biebs to invite him to a party is just a little creepy too. I mean, it's actually a lot creepy.

I'm not a fan of this song. Sorry, kids. 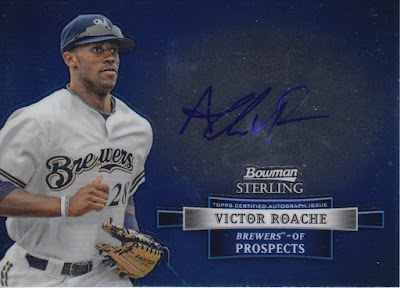 Speaking of kids, here's Victor Roache. Roache was one of the Brewers three picks in the first and compensation round in 2012. They selected Clint Coulter, Roache, and Mitch Haniger. Being four years after that draft, we can see some hits and misses there already. Coulter was #27, Roache was #28 and Haniger was #38. Selection #35 was Mets catcher Kevin Plawecki. #36 was Cardinals OF Stephen Piscotty. #39 was Rangers uberprospect Joey Gallo. #41 was Astros P Lance McCullers.

Roache turns 25 in September. He has not progressed past Double-A Biloxi as of yet. In 367 plate appearances there, he's slashed at .246/.322/.435, and he has been passed by a number of players. He needs to hurry if he wants to get to the majors.

3. "As Long As You Love Me" featuring Big Sean


Michael Marsden starts out this video lecturing the Biebs about how Biebs should treat his hypothetical daughter. So the video goes from there to a church interspersed with Biebs in bed with some chick, then to a parking garage dance party. Real video from Bieber's arrest in Miami for dangerous driving is spliced in as well.

I'm trying to like this. To give it a chance. It's just not working. This is just overproduced crap. Big Sean's cut in the middle isn't bad, but why do I find myself waiting for Michael Marsden to give Bieber those fake bruises showing up in his face? Why do I start yelling "smack that little punk!"?

I'm too old for this music, aren't I? 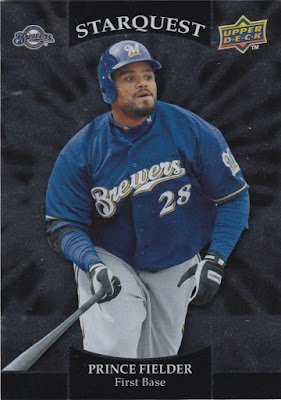 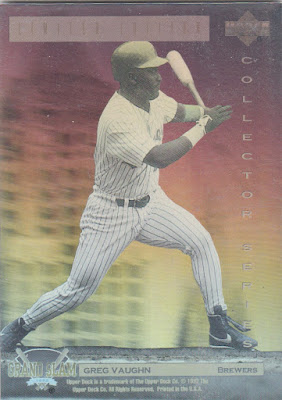 Apropos of nothing, here's a "silver starquest common" from 2009 Upper Deck of Prince Fielder and an Upper Deck Denny's Grand Slam hologram from 1992 of Greg Vaughn. Correct me if I'm wrong, but I think that Silver and Upper Deck go together like a horse and carriage.

Similar to the Bieber song, though, I have yet to figure out the starquest common thing. I haven't tried too hard, but all my efforts have failed.


Reading about this track, it seems that this was an odd pairing to a lot of folks. Bieber apparently reached out to Scott to see if they could work together. This song, to Scott, was perfect to have Bieber come on the cut. Originally, Atlanta's own Young Thug was the only "feature." Then, the song leaked out on to the internet, so Scott wanted to mix it back up. Scott sent Bieber the song, and, as Billboard has Scott tell the story, Bieber recorded his own rap verse overnight.

So, my take on this song: it's disjointed and overdoes the autotune. I've never listened to Travis Scott before, and after this, I probably won't listen to any more of his music. It's a dirge. Billboard calls it a "hypnotic masterpiece"; I call it "music to listen to while stoned if you're thinking of jumping off a building because it's so boring it will destroy your will to stay awake and you'll fall asleep before you jump." 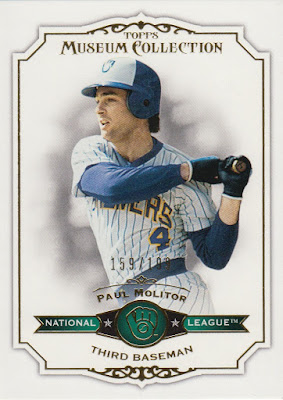 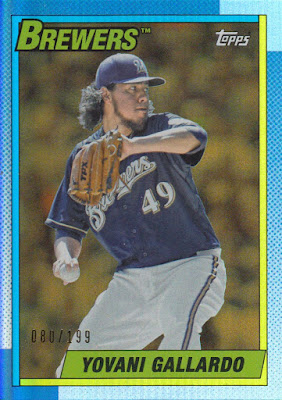 Many thanks go out to the Card Papoy for the great cards he sent my way. There were a bunch more, but I'm not sure I can listen to any more of Justin Bieber's best songs. But, to meet the title of this post, I give you Gilly W's Hon Eng 10 Site (I'm guessing that means Honors English...). Gilly wrote an ode to the Biebs that I thought Papoy would enjoy: 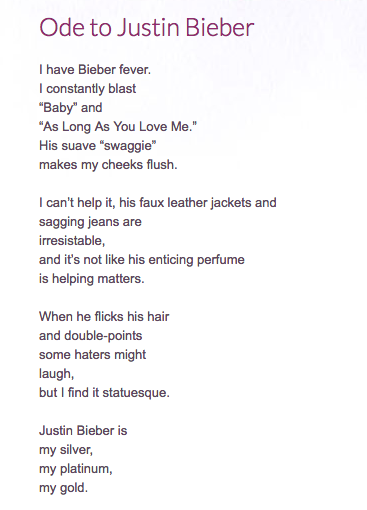 Come on everyone. Let's all get Bieber fever.

Thanks for getting through that with me. And, on another note, thank you to all of you for the now well-over 100,000 hits here on Off Hiatus! I am humbled that you would take the time to read this.