The year is 1984. 12-year-old Tony L. is, at that time, pretty hardcore when it comes to trying to collect as many baseball cards as he can. Well, in between listening over and over and over to the tape version of Van Halen's 1984 that he found one day on the side of the road walking home from his Saturday morning bowling league.

The coolest people in the world to that 12-year-old kid were David Lee Roth and Paul Molitor. Of course, Molitor sat out most of 1984 -- his age 27 season -- after having Tommy John surgery.

The 1984 Brewers pretty much sucked without Molitor. Two years after making the World Series, the team finished a pathetic 67-94 in Rene Lachemann's first season as Brewers manager. Staff ace Don Sutton -- at the age of 39 -- compiled a 14-12 record with a 3.77 ERA in 212-2/3 innings, striking out 143. Relief ace Rollie Fingers -- at the age of 37 -- saved 23 games in his first season back from a muscle tear in his right forearm suffered in September of 1982. When Jaime Cocanower is your third starter, you know you have some problems.

The great thing for me with all of that happening was that Brewers tickets were plentiful and easy to come by. Adding to that was that my mom was willing to spring for the $10 total for me and my younger brother (who turned 1 that year) to join the Brewers-Pepsi Fan Club. That $10 came with a subscription to What's Brewing? magazine -- the Pravda of the Brewers media outlets -- and general admission tickets to six different games throughout the year.

1984 was also a food-issue and oddball collector's paradise. For the Brewers, in addition to the usual dozens of different police department cards, there were Gardner's Bakery cards (printed by Topps and inserted in packages of hot dog and hamburger buns and loaves of bread).

In addition, chocolatier Nestle had teamed with Topps to issue a complete 792-card parallel set to the Topps flagship. Supposedly, only about 4,000 sets were produced and, as industry maven Rich Klein noted on Net 54 Baseball a few years ago, two dealers bought up much of the stock of the sheets and had them professionally cut up to sell single cards.

If you have seen a photo of me lately, you know that I like to eat -- more than is probably good for me, to be honest. As a 12-year-old, I could get away with that a bit more, and I ate enough chocolate to be able to get one of the sheets that Nestle gave away through the mail-in offer.

I always wanted to frame it and hang it on the wall -- at least I did when I was a kid. Doing so at that time, though, was prohibitively expensive. Frankly, in those pre-internet days, I really didn't have the foggiest idea where to find a picture framer.

Last Thanksgiving, when my mom and younger brother came to visit, they brought my one sheet of Nestle cards -- still in its rolled up tube. And finally, now, after just 32 years, I could finally frame that sheet. 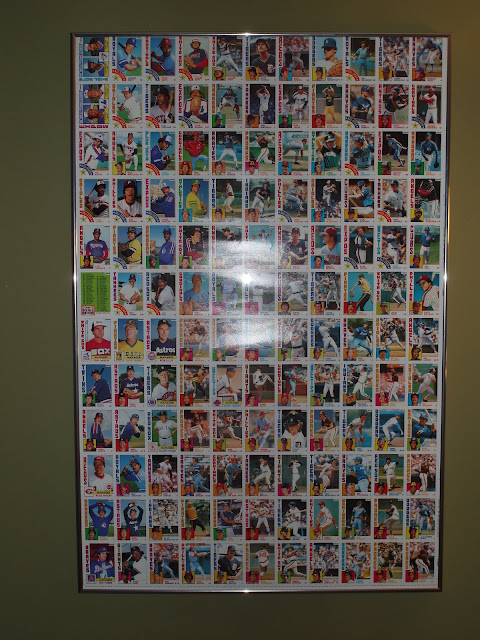 The flash made those cards in the middle not easy to see.  Here's another photo, this time without the flash but a little blurry. 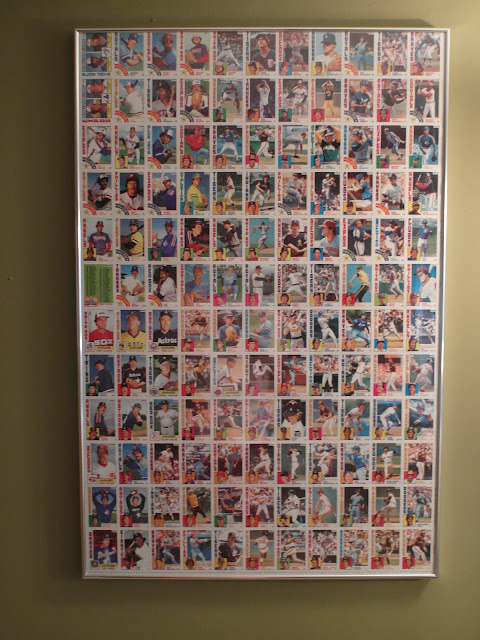 Part of me now wants to find the other five sheets -- each sheet is 12 rows of 11 cards, meaning 132 cards a sheet, which is why Topps's sets were 660 cards for a long time and why there were double-prints when the sets were 726 cards.

The other part of me notes that this thing is pretty damn big -- about 2-1/2 feet by a little more than 4 feet -- and I don't have the wall space for any more.

Still, the 12-year-old inside me is pretty excited to finally have that up on the wall.
Posted by Tony L. at 11:20 AM