Last week Friday, my wife and I decided on what qualifies as the spur of the moment for us -- just 6 hours advance notice -- that we would treat ourselves to a really good dinner. My wife loves steak. I mean, she could eat it every day of the week and twice on Sunday if her appetite and money would allow. So, it was off to the nearby Capital Grille for an excellent meal. Pricy, but excellent.

The nearby Capital Grille is located near a lot of malls/shopping center areas. So, we finished off our dinner with a trip to Target because, why not? It was close by, after all. My wife had some around-the-house clothes she needed, so I wandered over to the card aisle. Nothing really grabbed me, so I grabbed a blaster of the latest and greatest -- Bowman.

In each $19.99 blaster, Bowman promises a total of 80 cards -- 8 packs of 10 cards -- with the possibility of a retail exclusive autograph. As with all retail purchases, I kept my expectations low and, frankly, didn't expect too much.

And, that's about what I got. Not too much.

The four players that the Brewers have in the set are Orlando Arcia, Trent Clark, Brett Phillips, and David Denson. Here's another irritation.

There is no denying that David Denson is a good story as the first openly gay professional baseball player. Setting aside the story, however, and looking at it only based on prospect status and ability, Denson should not be anywhere near the Prospects set. Denson was not among Milwaukee's Top 30 prospects according to MLB.com coming into this season. The top 5 were Lopez, Arcia, Phillips, Clark, and Double-A lefty sensation Josh Hader, who did not get a card.

Based solely on merit, however, Denson should not be in the set. And as we all know, merit does not matter to Topps/Bowman. Only the bottom line does.

Yes, that is enough complaining.

I did pull two Brewer cards in my box of 80 -- which is probably about as many as I could expect. 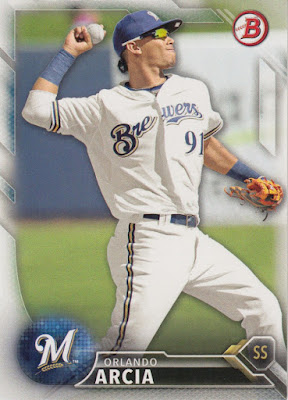 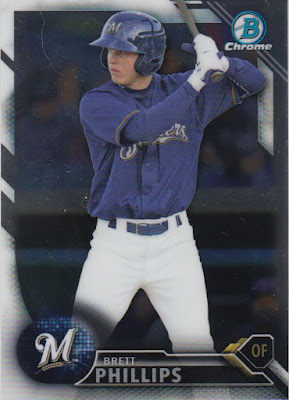 Happily, the two guys I pulled were the two I most wanted. Orlando Arcia and Brett Maverick Phillips. Phillips became known among Brewers fans this spring training for his absolutely fantastic -- or as Sports Illustrated called it, spooky -- laugh that got him plenty of attention.

Reliever Will Smith then took advantage of this and tried getting Phillips to laugh with "Mom Joke Monday":

We challenge you to watch this without laughing. #MomJokeMondayhttps://t.co/KRnRC54wpY
— Milwaukee Brewers (@Brewers) February 29, 2016

The fact that Phillips doesn't take himself so seriously and looks like he actually has fun being a ballplayer makes me like him even more. This appreciation for him is pushing him closer and closer to being a player collection for me. I'm waiting, though, at least until he makes it to Triple-A and starts hitting a little bit better than a .250/.350/.425 slash line. Then again, he's still very young, and he's had some problems staying healthy, so maybe I'll restrain my enthusiasm for another couple of years.

The rest of my Bowman blaster wasn't bad -- it just wasn't Brewers.  Here are the highlights, provided without comment: 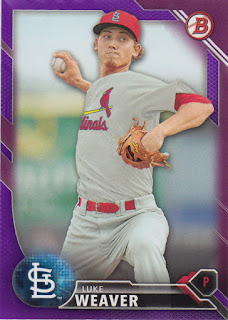 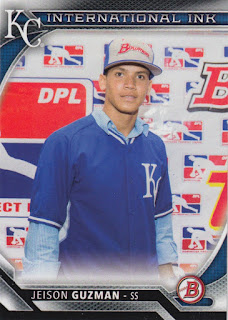 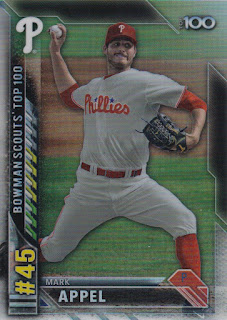 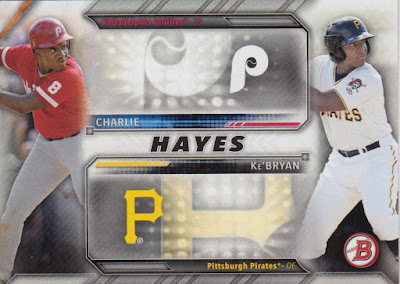 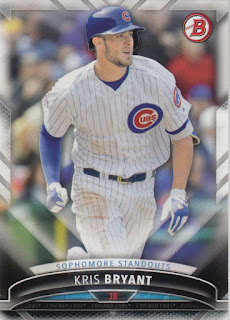 The one card I'm considering keeping from this is the Hayes card. I've always liked the "father-son" cards -- an idea that Topps is resurrecting for the first time in a long time in its Archives set this year with a "1985 Father-Son Recreate Set" insert and an autographs insert as well (including more Griffey!). In fact, maybe I'll start a mini collection of "relative" cards like the 1976 Topps father-son cards and the 1977 Brothers cards being included, among others.

Perhaps that way, I'll have something to collect when Topps eventually phases out including the Brewers in all of its sets and completes its transition to "All Cubs, Yankees, and Red Sox all the time."
Posted by Tony L. at 10:14 AM