Brewers from The Dollar Store #SuperTraders

Hey, y'all. I took the last few days off away from blogging. It's not that I was burned out or lacking in ideas or lacking in post material.

Okay, there was a little bit of each of those in my taking a break, other than the material thing. More to the point, I found myself wanting to read a bit. With my schedule as it was this week, a choice had to be made between blogging and reading. So, I read.

I started re-reading The Bill James Guide to Baseball Managers, and I found myself longing for a new version of James's Historical Baseball Abstract. He's almost due for a reissue, after all. The first edition came out in 1985, and the second edition came out in 2001. So, on that schedule, one should come out next year, right?

I love history. Baseball history is my favorite to read about, in large part because that is the history I have read most. There are so many stories in baseball history that have been told to the point of where myth seems to become reality -- for instance, the whole Abner Doubleday creation myth, which has its own Wikipedia page and, yet, when you Google "who invented baseball" the response is to produce a picture of ... Abner Doubleday.

All that is just for explanation's sake. I could have easily written something earlier this week to talk about the great mailer I received from Super Trader Sportscards from the Dollar Store. Thanks to Jaybarkerfan putting together that group, I traded for the first time with Buckstorecards. I sent an envelope of Mets across the border, and in return, I received some great O-Pee-Chee and other Brewers in return. 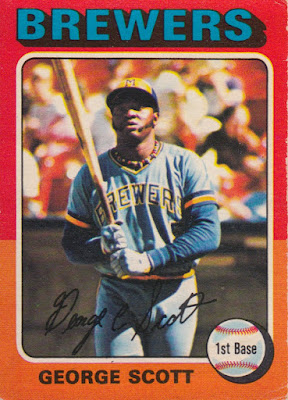 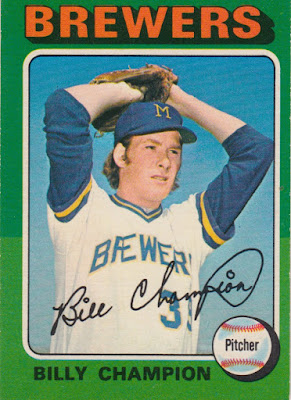 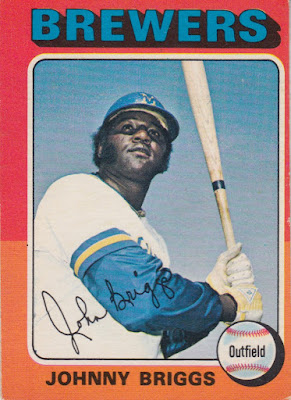 Starting with O-Pee-Chee from 1975, we have George Scott, Johnny Briggs, and Billy Champion. Over the first seven seasons of Milwaukee's existence, Scott was definitely the best player to don a Brewers uniform. He spent five seasons with Milwaukee -- splitting two separate stints with the Red Sox up. In those five seasons, Boomer slashed at .283/.342/.456 (OPS+ of 131) with 115 HRs and 463 RBI and five Gold Gloves in five years.

The Brewers did well in both trades involving Scott. In 1971, the Crew got Scott, Ken Brett, Billy Conigliaro, Joe Lahoud, Jim Lonborg, and Don Pavletich for Tommy Harper, Lew Krausse, and Marty Pattin. Getting Scott by himself was a benefit enough, but the other players' contributions weighed that trade in Milwaukee's favor (though Harper did well for the Red Sox).

Other than these great, old O-Pee-Chee, the package from Canada skewed toward serial numbers and minor leaguers. Let's go with the minor leaguers first. 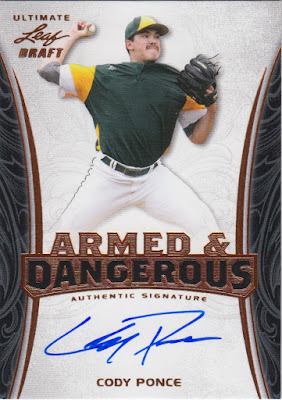 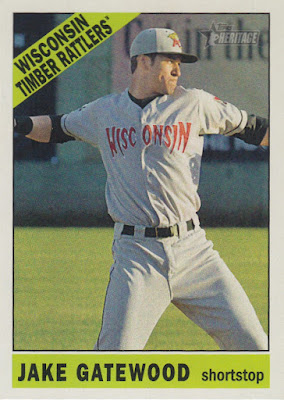 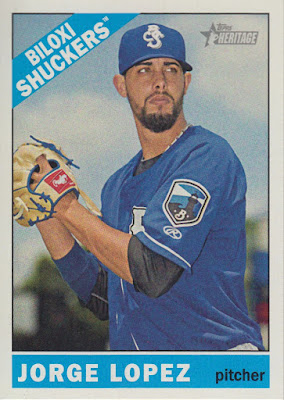 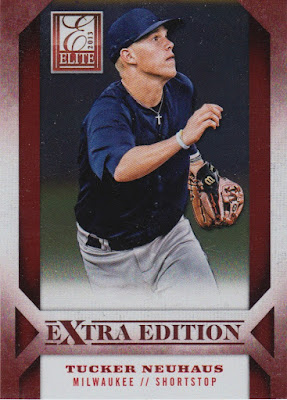 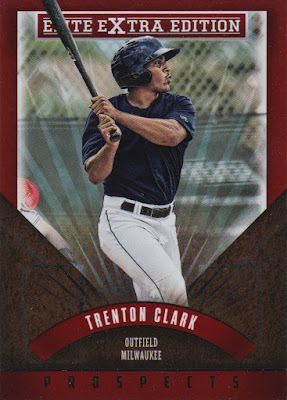 It's my second Cody Ponce autograph from Leaf. Buying the first one I got might have jinxed him, since he went on the DL shortly after the season started with forearm fatigue. Remember, boys and girls, There Is No Such Thing As A Pitching Prospect. There are pitchers who are pitching currently and will be hurt later on or were hurt before, and there are pitchers who are currently hurt.

Jacob Gatewood is a kid the Brewers drafted out of high school in 2014 with the 41st overall pick. The last time I talked about him in February of 2015, I noted that, at 6'5" tall, it seemed likely that he would shift to third base -- and that he needed to hit more to develop. Well, it was not a stretch to say that since the Brewers have one of the game's best prospects at the age of 21 at Triple-A. But, my prediction came to fruition this spring when Gatewood was moved to third base. Now, he needs to learn how to take a walk -- something he has yet to do in 104 plate appearances this year at Single-A Wisconsin.

Jorge Lopez made his major league debut last year, getting two starts in September. He's been getting bombed at Triple-A Colorado Springs this year so far, and the worrisome part of that is that he is averaging nearly a walk an inning. That will just not fly in the big leagues.

Tucker Neuhaus was drafted as a shortstop in 2013 out of high school. He's now playing second base for the Wisconsin Timber Rattlers, but will be out for a few more weeks due to a broken finger. It's too bad -- he was off to a sizzling hot start.

Trent Clark is just a kid barely out of high school in Texas, so he's still working in extended spring training at this point. The team decided not to push him to a full-season league as of yet, and he'll probably find himself assigned to the Helena Brewers in the Pioneer League.

Now, for some serial numbers: 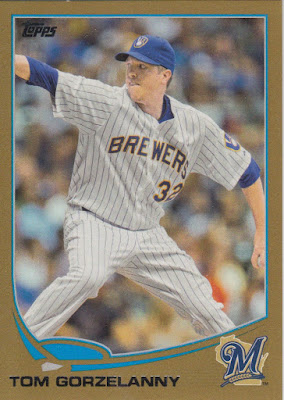 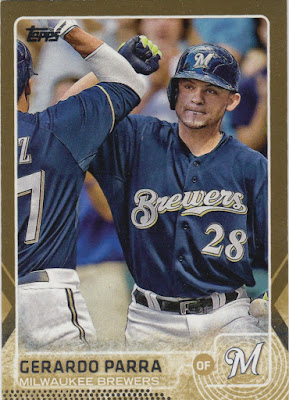 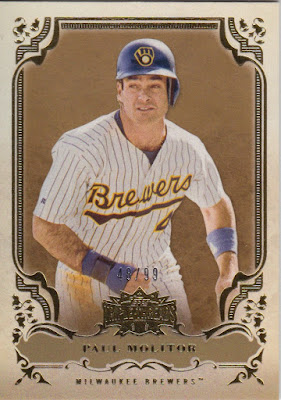 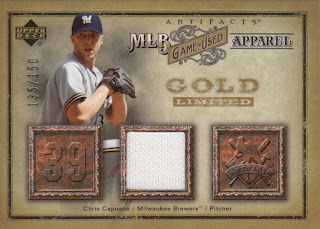 The top two are nice cards -- the Gold parallels from Topps serial numbered to 2013 for Gorzelanny and 2015 to Parra. The Gerardo Parra era in Milwaukee seems like years ago even though it ended only last July. The pitcher the Brewers got in return for Parra -- Zach Davies -- hasn't pitched very well this year in his four starts (19-1/3 innings, 10 walks, 13 strikeouts, 28 hits allowed) but, he's young (only 23 years old) and the Brewers aren't going anywhere anyway. His most recent start was a good one, so hopefully that will bode well going forward.

Gorzelanny is toiling away at Triple-A Columbus this year in the Cleveland system. I'm shocked to learn that Gorzelanny is still just 33 years old. He came up in 2005 with Pittsburgh at the age of 22 and put up his best season -- and just under a quarter of his entire career's innings in the big leagues -- in 2007 at the age of 24. I guess that's why it seems like he should be so much older now.

Chris Capuano returned to Milwaukee at the age of 37 this year for one last go-round. He's pitched decently (though he is walking too many people too, with 12 walks in 16 innings so far) but his role is really to give the Brewers some innings when the starter gets knocked out too early...which has happened a ton this year, unfortunately.

The best part of this entire envelope is very clearly the Paul Molitor Triple Threads Gold Parallel serial numbered to 99. For quite some time, there has been a groundswell in Milwaukee for the Brewers to put a Molitor statue outside Miller Park. Currently, there are statues of Robin Yount (of course), Bob Uecker (makes sense), Hank Aaron (okay, I can see it for his Milwaukee Braves/Brewers days combined) and Bud Selig (fine, he brought the team to Milwaukee) -- but there is not a statue of the second-ever Brewer in the Hall of Fame.

Why is that? Almost certainly, it is because Molitor left the team after the 1992 season when Selig and Sal Bando lowballed Molitor and made a contract offer of just $900,000 for just one additional season. Molitor signed on with Toronto instead for 3 years and $13 million (and turned down the Angels offer of $6.5 million for 2 years). Molitor has said in the past that he had no desire to leave Milwaukee, but the team told him "There's not a lot we can do right now given our circumstances."

Sure, Molitor was going to turn 36 during the 1992 season. But, he was coming off an injury-free season in which he appeared in 153 games.
This is the very reason why I abhor Bud Selig. Selig created the "circumstances" to which Molitor referred -- giving people like Edwin Nunez and Ron Robinson million-dollar contracts in 1992 and Tom Brunansky and Bill Doran in 1993. But, yeah, Molitor is the guy who was disloyal, right Mr. Selig?

Many thanks to Sportscards from the Dollar Store for these great cards and for the opportunity to revisit some history.
Posted by Tony L. at 11:13 AM