I got home from work today after my usual battle with Atlanta's traffic in a better mood than usual.  That was because, in large part, I was able to maneuver my little car through a few pockets in front off the usual idiots too busy talking on their cell phones -- or illegally texting, even -- and that made my ride go by more quickly. Of course, I know -- I'm that idiot weaving in and out of traffic whose impatience drives others crazy.

Anyway, my mood got even better when I walked in the door and found a little white envelope from Jeff from 2x3 Heroes with some really cool stamps from the mid-1970s on it: 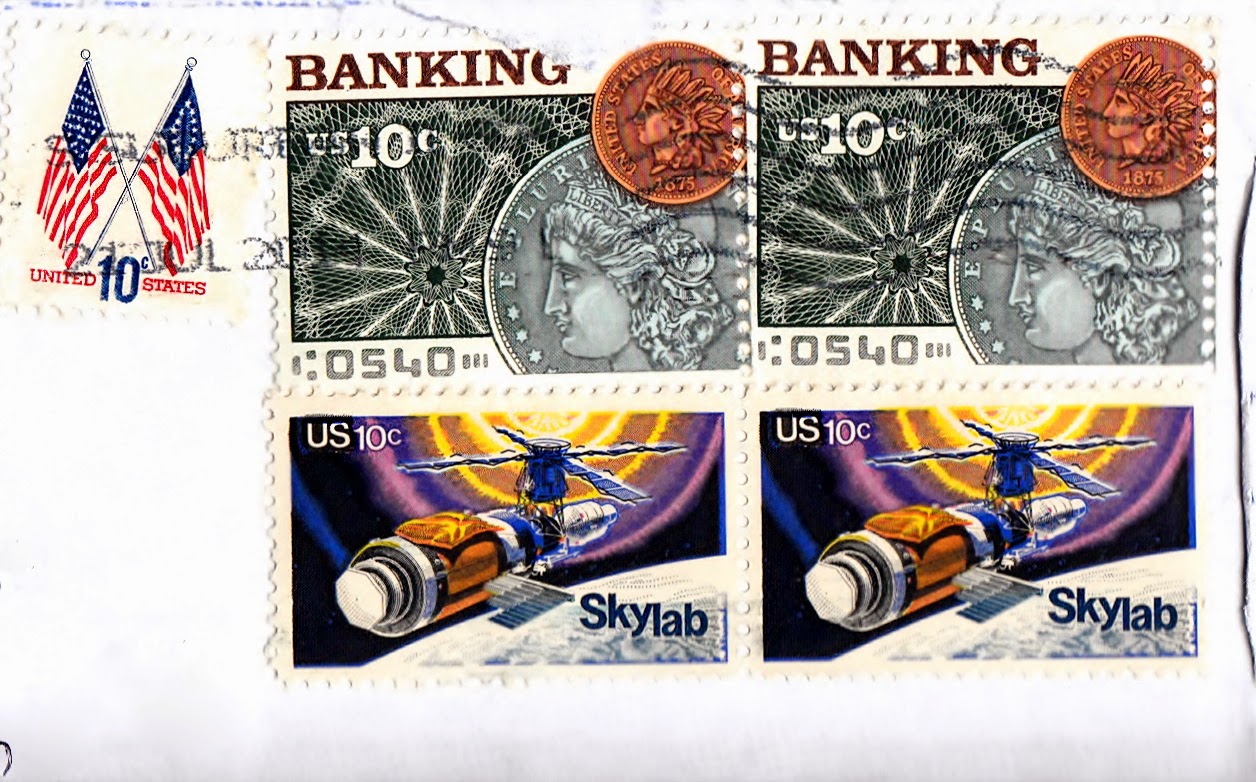 I'm not a stamp collector currently, but when I was a small kid chasing stamps was a family event for my brother, my mom, and me.  That Skylab stamp is one I remember well from that time.  I mean, how cool was the first floating science experiments in outer space?

Inside were six cards and a pink Post-It note: 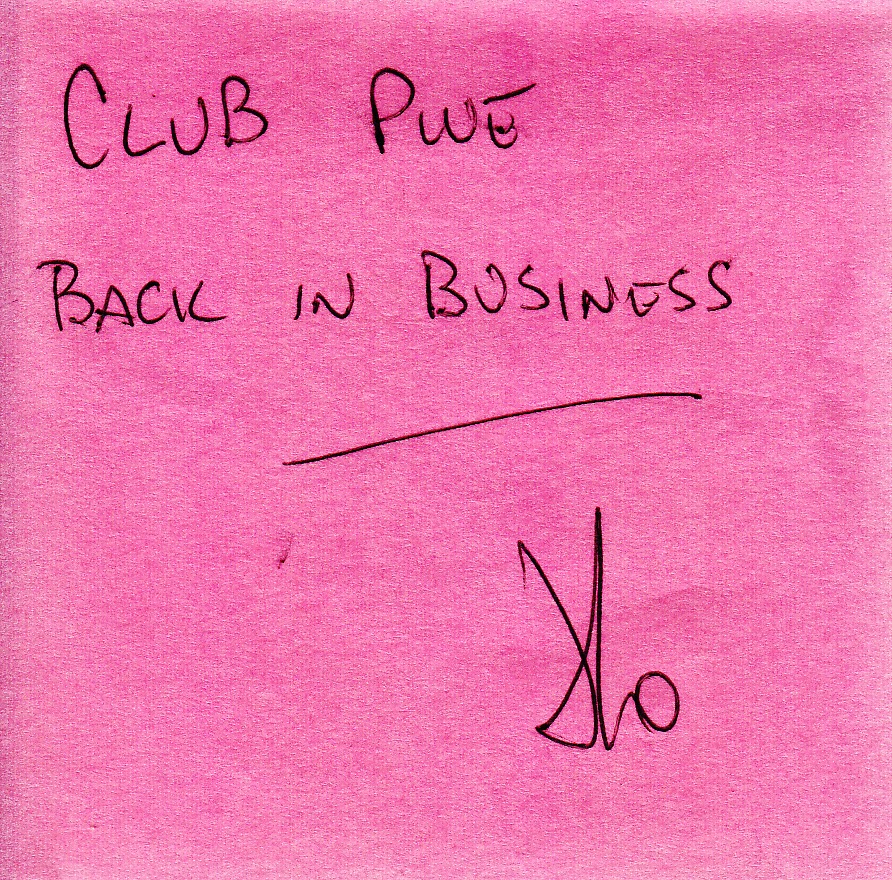 Finer words have not been spoken.

Of the cards inside, two were Braves and four were Brewers.  First the Braves: 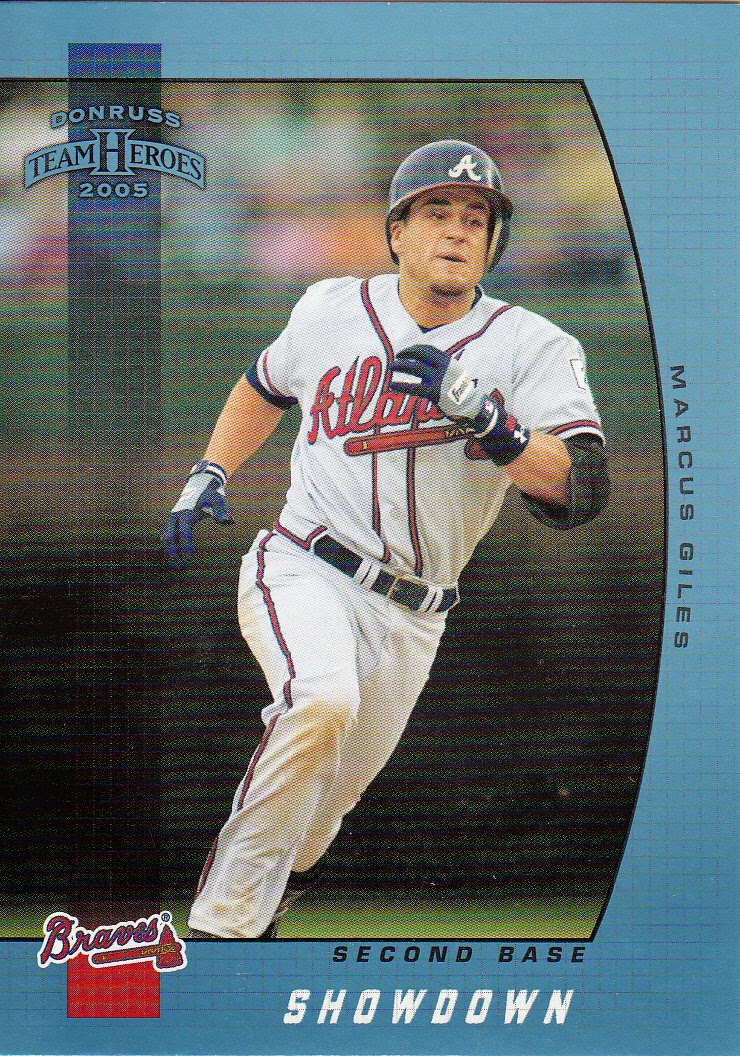 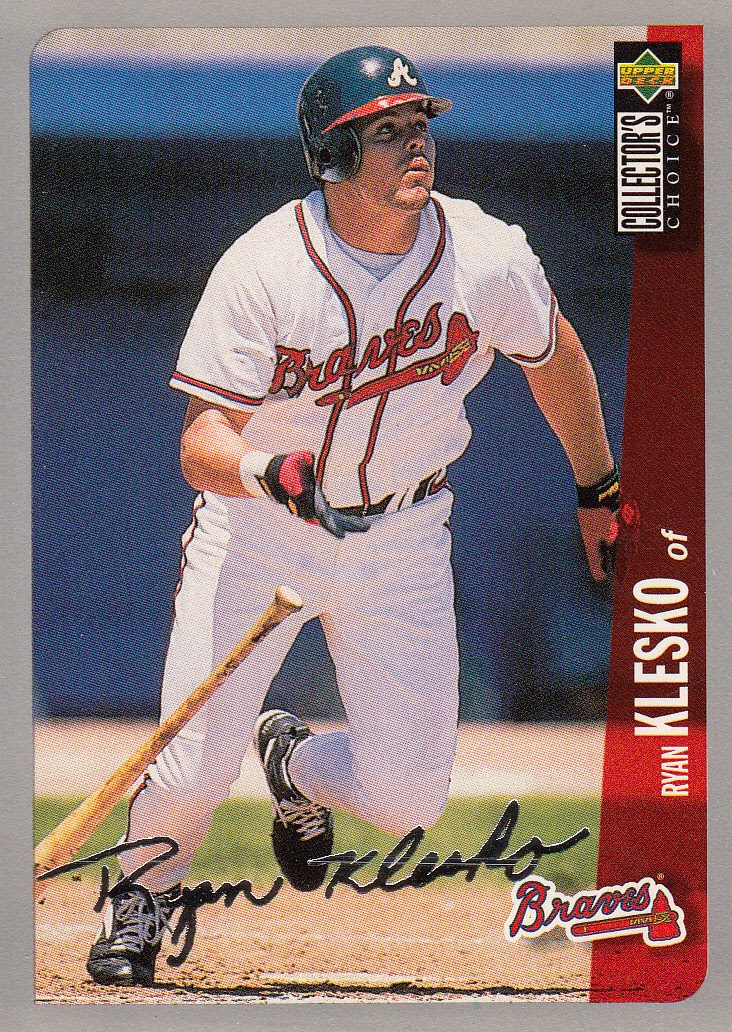 Marcus Giles had a stretch in the early 2000s where he was certainly in the conversation as one of the best second basemen in the National League. For whatever reason, though, Bobby Cox always jerked Giles around -- not playing him regularly for a while, playing him begrudgingly and only when Giles had forced his way into the lineup, and then yanking him out of the lineup the minute Giles went into a slump.  Now, some folks saw that timing and thought PEDs were the reason, but this "Sabernomics" article said he was incredibly lucky at first and his luck caught up to him.  For whatever reason, Giles never repeated his early success and was done by age 29.

Ryan Klesko, on the other hand, was awkward to watch while he played left field.  But, he came to bat either to "Evenflow" by Pearl Jam or to "Simple Man" by Lynyrd Skynyrd.  Music, please:

As for the Brewers, I had two of the four cards.  The two I had already: 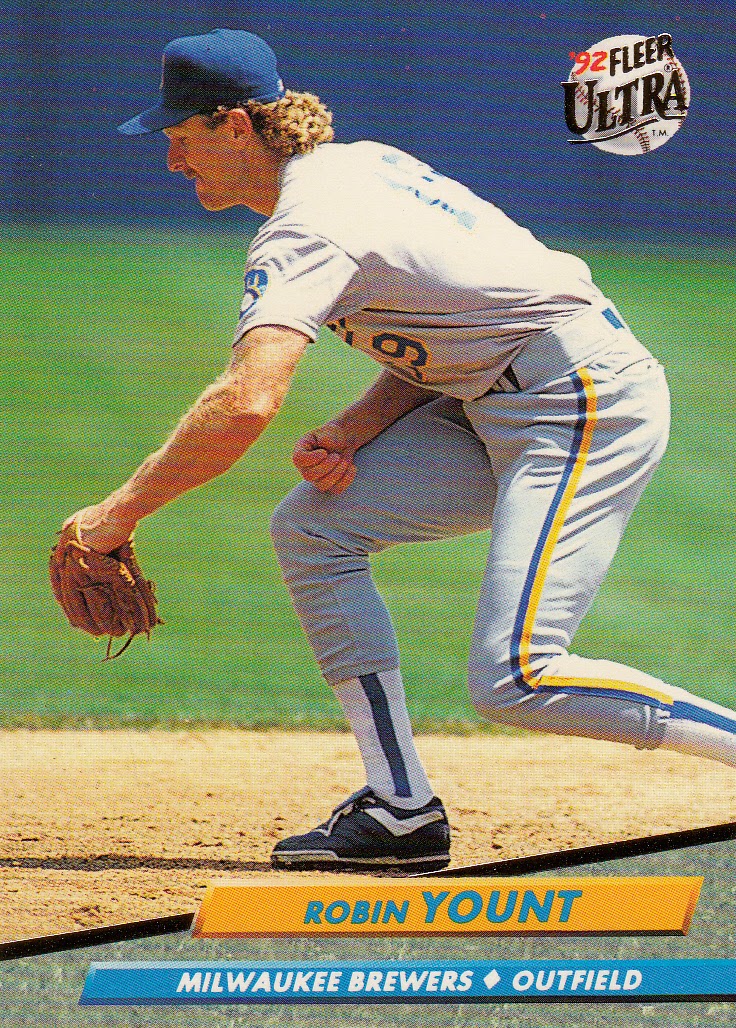 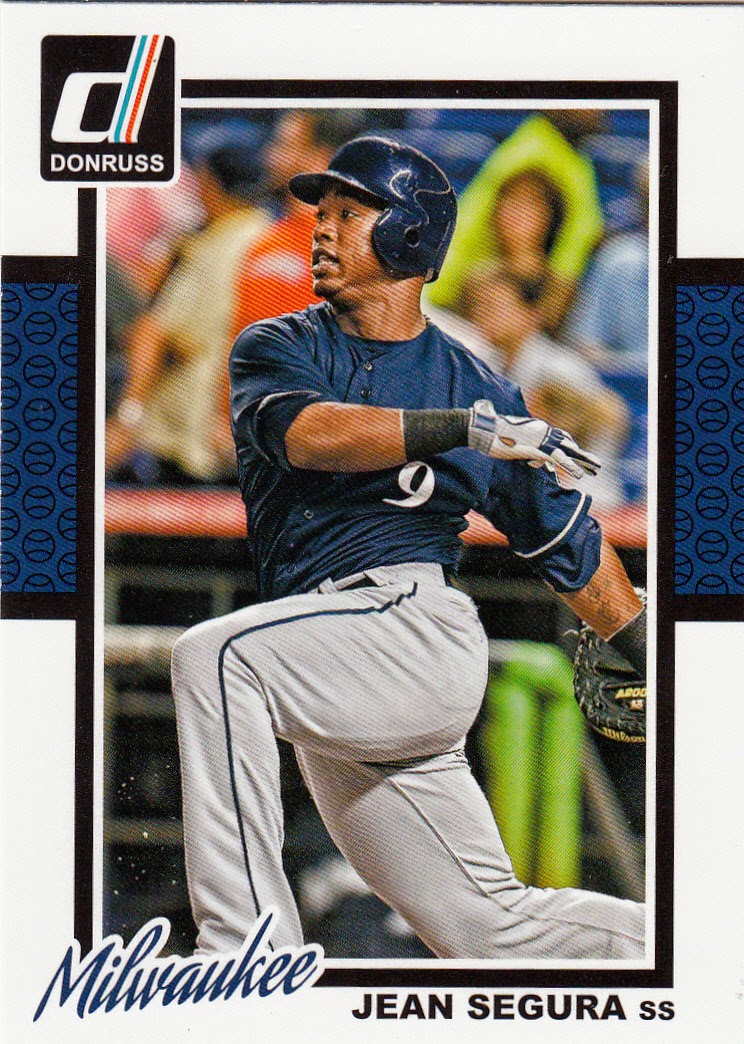 Robin Yount playing first base while listed as an outfielder on a strange photo from Ultra, while Jean Segura is pictured playing for the Milwaukee "? and the Mysterians."  I am still torn about the Donruss. The borders are too thick and the "D" logo is too large, but at least the photo isn't cropped ridiculously closely as Topps is wont to do.

Finally, here are the two Brewers cards I needed: 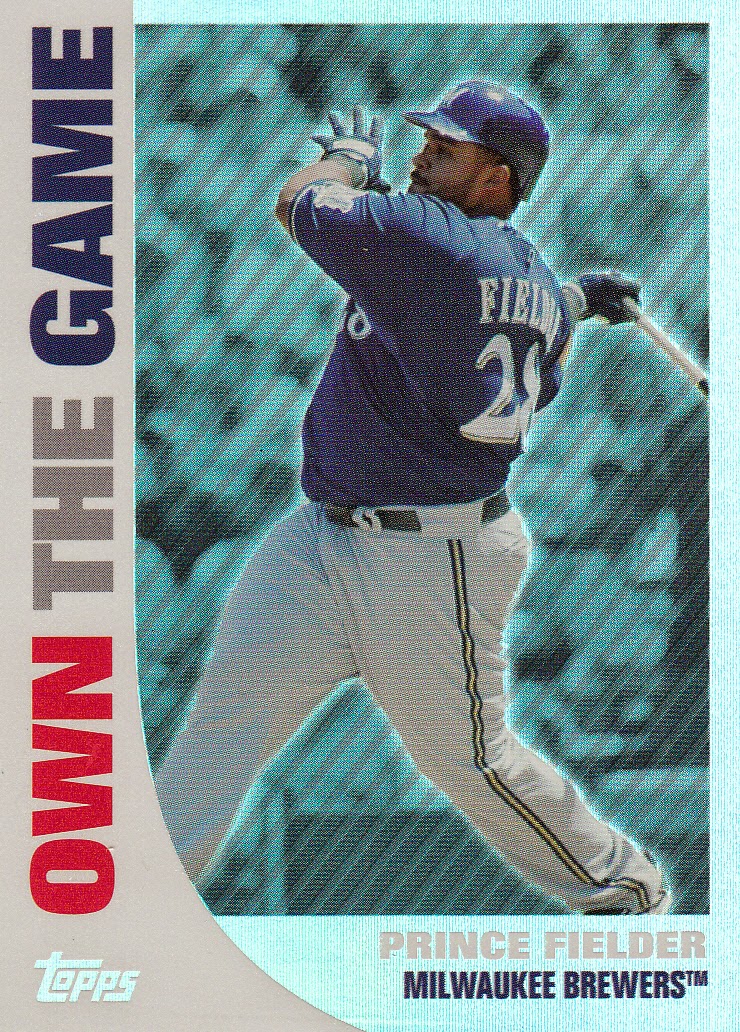 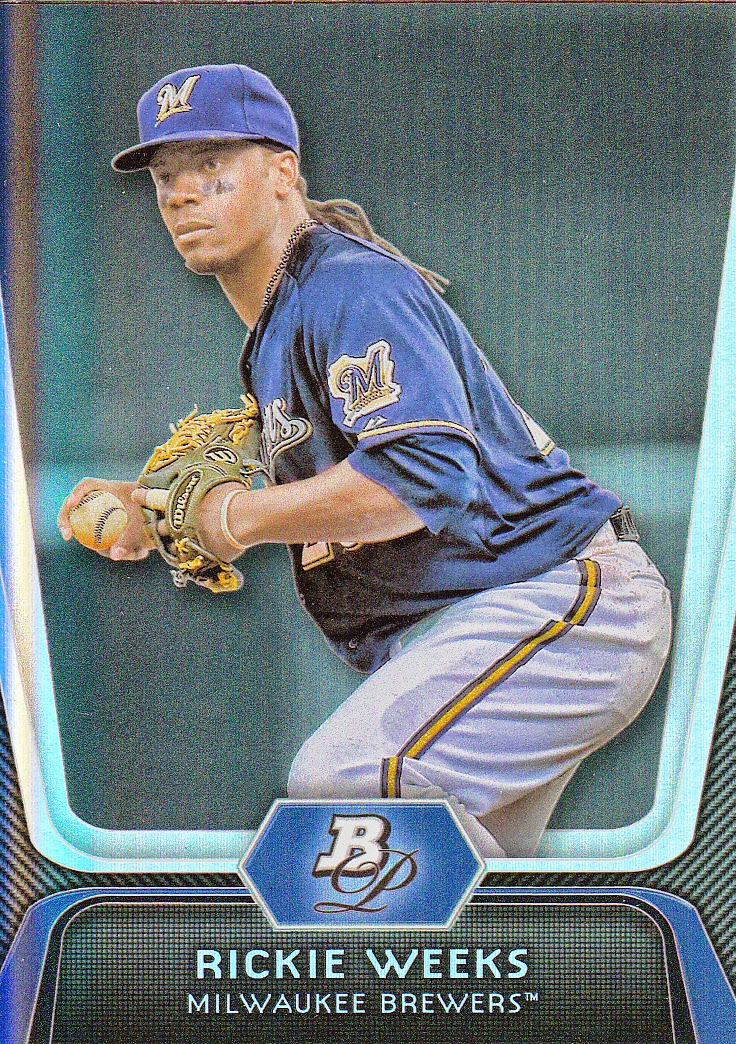 The Fielder insert from a 2008 Topps set is nice and shiny while generously listing the heavy-set herbivore at 260 pounds.  The Rickie Weeks comes from the 2012 Bowman Platinum set, and the scan of the card makes him appear to be jumping off the card as if we are all wearing those old 3D glasses.

While I poked fun at the cards and the players pictured, trust me when I say that I am extremely pleased that the PWE Club is back in business.  Hopefully, this will motivate me not to obsess as much about what I am sending and simply getting me just to send the cards out!

Thanks a ton, Jeff!