When rosters expanded in September of 1970, the Brewers were quick to make some moves.

One of the moves made no difference on the field but made every difference in the world to a long-time Milwaukeean: the Brewers signed Harvey Kuenn to a free agent contract and placed him on the active roster to allow him to accrue additional service time to max out his MLB pension. The 39-year-old Kuenn did not get an at bat -- unsurprising since he had been serving as a coach all year and had not played in the majors since 1966. But, it was the thought that counted to Harvey; he became a fierce supporter of Bud Selig from that point forward.

Another more run-of-the-mill transaction also occurred on September 1: minor leaguers getting called up to get a cup of coffee in the majors. Such was the case for Brewers prospect Pete Koegel. Koegel came in to pinch hit in the bottom of the sixth inning for starting pitcher Lew Krausse against Twins ace Jim Perry, who won his 20th game that day and went on to win 24. Alas, Pete tapped out to Perry in his first ever major league at bat. Koegel went on to bat just 9 times total that September, but he did hit his first and only major league homer on September 25 against a guy who should be in the Hall of Fame -- Tommy John.

Peter John Koegel was born and raised in Seaford, New York, which is on Long Island about three or four towns west of Amityville and south of the famous suburb Levittown. Koegel was drafted straight out of high school by the Kansas City Athletics in the fourth round of the first-ever draft.

Koegel was known for his prodigious power even in high school. He was voted the most valuable player in the Hearst Sandlot Classic, played August 21, 1965 in Yankee Stadium, after slamming a 420-foot triple just shy of the auxiliary scoreboard in deep left field in old Yankee Stadium. He received the MVP trophy from Lou Gehrig's widow, Eleanor, days before signing for a $45,000 bonus with the A's.

Thanks to that bonus and his hitting skills, Koegel was immediately assigned to the Midwest League for his first minor league experience. As an 18-year-old who was about 3 years younger than the average player, he slashed .233/.319/.450 and smacked 21 HR and even stole 10 bases. His team paced the league with 117 HR that season, so he may have been the beneficiary of a favorable home park -- the next highest was 93, and the worst was the San Francisco affiliate, which hit 23 as a team! Still, Koegel hit homers throughout his minor league career everywhere he went, finishing his career with 175 HRs in 1238 minor league games (4722 plate appearances, .248/.335/.429 slash line).

Koegel joined the A's at the time that they were putting together quite a good farm system. During spring training in 1967, he was vying for playing time against such notables as Joe Rudi and Reggie Jackson in the outfield and Dave Duncan at catcher.

Even in the Arizona rookie league in 1966, he had to contend with future big leaguer Ted Ford, and the A's also had future Brewer Sal Bando playing the position a step higher in the organization.That rookie league team was stacked. It included Rick Monday, Dave Nelson, Cito Gaston, Reggie Jackson, Duffy Dyer, and Rollie FIngers. Later in his career, he shared minor league fields with Vida Blue, Gene Tenace, and Skip Lockwood. The A's did some great player identification work in that 1965 draft.

As Koegel worked his way up in the A's system, the biggest problem he had was finding a position. He played third in Arizona, outfield in his first pro season, first base and outfield in his second season, and mostly outfield after that. But when you're behind and play the same position as Joe Rudi, Rick Monday, and Reggie Jackson, you become expendable quickly.

As a result, Koegel joined the Pilots organization in August of 1969 when the now-Oakland A's decided they wanted Jim Bouton's archenemy Fred Talbot and sent Koegel and Bob Meyer (Brewer #14) to Seattle. It was in the Milwaukee system that an attempt to put Koegel behind the plate as a catcher was tried -- just to get him on the field.

Koegel went on to play in just nine total games for the Brewers -- 7 in 1970 and 2 in 1971. He was then shipped out by Frank "Trader" Lane along with friend of the blog Ray Peters to the Philadelphia Phillies for John Briggs on April 22, 1971.

Nothing personal, Ray or Pete, but I think Lane got the better of that deal. Maybe it was due to Ray messing up his shoulder in 1971, but Briggs spent parts of 5 seasons with Milwaukee and hit 80 HRs with the club and sported an OPS+ of 131 (31% above league average) over that time.

After that trade to the Phillies, Koegel appeared in a total of 20 games in the major leagues, with 12 of those appearances being at catcher. Thanks to those 12 games, however, Pete is still the owner of a major league record: at 6-feet-6-inches tall, Pete is tied with Don Gile and Grayson Greiner as the tallest players ever to play catcher in the major leagues. Greiner is the most recent of the three to play, making his debut last year in May.

Because Ray Peters is still in contact with Pete, I asked Ray to ask Pete if the measurement of 6'6" tall was legitimate or if it was like college football measurements -- you know, a little bit of "extra" getting added in to improve appearances. Pete passed along that this is a legitimate measurement -- and in fact shorts him by 1/2"! He was measured at 6'6-1/2" by the United States Government for his military draft physical -- and that half inch meant that he was too tall for military service!

For what it's worth, the 1970 Milwaukee Brewers in spring training had the beginning of a good pickup basketball team. With Pete at 6'6-1/2" tall and with Ray Peters measuring nearly exactly the same, the team also had Gene Brabender at 6'5" tall, Wayne Twitchell at 6'6" tall, and 1971 debutante Bill Parsons also standing 6'6". Add in Don Bryant, who was a Rule V draftee (who was returned to the Astros) and stood about 6'5" tall as well, and you can go 6 players deep!

Ray also passed along a great story that Pete told about height. Pete was watching the MLB game of the week, and Tim McCarver was interviewing Dave Winfield. Winfield also stands a legitimate 6'6" tall, and he made two innings of appearances at third base. Winfield then claimed to be the tallest ever third baseman, and McCarver quickly corrected him to say that no, Pete Koegel is taller than you and he played 4 games at third in 1972.

Finally, Pete was a prodigious hitter in the winter leagues. While I am not sure what records he set with Leones, this Pinterest page says he has some. Plus, it gave us this great shot of Pete after the 1970s caught up to his facial hair: 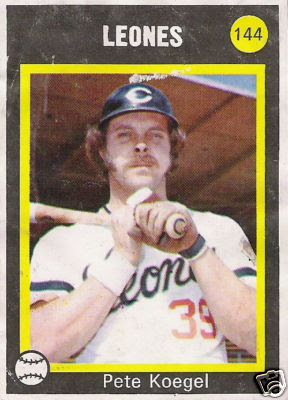 My thanks to Ray Peters for giving me some great stories from Pete and about Pete, and thank you for reading. Koegel's three Brewers/Pilots cards are shown above, and I am missing the autographed 2018 Pilots Heritage card from last year.
Posted by Tony L. at 5:35 PM