Across the country, the changing seasons often have milestones peculiar to the area. For example, here in the South, spring does not begin in March, or February, or April, or when you might otherwise thing it does. Nope, it only lasts about 30 to 45 minutes after the pollen dies down from yellow hellfury to mere annoyance, as this video explains.

One of the most certain ways that Wisconsinites can tell it is summer is when all the Catholic churches bring in two or three beer trucks, attach taps to the outside, put up a stage, and have a festival in their parking lot. This happens literally only during the months of July and August, but it keeps tons of cover bands, polka bands, and random polka-rock fusion bands busy every weekend.

Yes, polka-rock fusion. You'd be surprised how many of these exist. And, it seems, Matt Prigge of the Summer of '74 blog and, recently, a man who picked up his second master's degree from the University of Wisconsin-Milwaukee, is apparently an aficionado of Wisconsin-famous band Happy Schnapps Combo.

Matt sent me a bunch of Brewers cards mostly from 2018 and some from 2019. Rather than write all about those, I'll show some (with a little commentary) but focus here on the Happy Schnapps Combo. While you do, remember that people in Wisconsin follow bands like this around. No lie.

Here's the stack I won't get to: 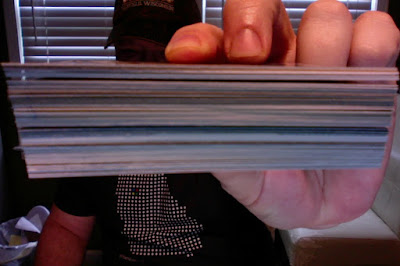 Like I said, he sent a bunch. To cover this bunch appropriately, let's go to the first Happy Schnapps Combo song I came across on YouTube. It's called "Fleet Farm (A Love Song)."

Appropriately, this video appears to have been shot in a parking lot during a summer festival sponsored at least in part by the Port Washington Lions Club. Lions Clubs, in case you're not aware, are service organizations found in chapters around the world who apparently try to help with everything from childhood blindness to disaster relief.

Fleet Farm (not to be confused with Farm and Fleet, by the way) is store that would result if Walmart and Home Depot had a bastard child and, for good measure, they had a mutation that incorporated a Pet Smart. No kidding. Look at the website for it -- everything from guns and tree stands to lawn mowers to tires to Cookie Monster toys to dog beds.

Of course, making things confusing is the fact that Farm and Fleet does basically the same thing on a slightly smaller scale. I never could tell those places apart. Guess that's why I had to leave Wisconsin. 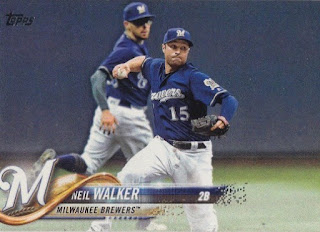 Why am I highlighting a Neil Walker card? Because I'd completely forgotten that he spent 38 games with the team in 2017. He was a Yankee last year, and he's a Marlin this year. Which all makes sense, I think.

I can't imagine a more Wisconsin YouTube clip than this song. First, it's a polka. Second, you've got the random drunk guy in front of the band (is that you, Matt) in gas station sunglasses and a cut-off t-shirt and jeans dancing and singing the whole song along with the band. Third, it's a polka about Blatz beer and sauerkraut. Fourth, the guy says you can get your "Boone's Farm" by the "bubbler."

Y'all know what a bubbler is? It's a drinking fountain or a water fountain in pretty much the rest of the country, but not in southeastern Wisconsin. 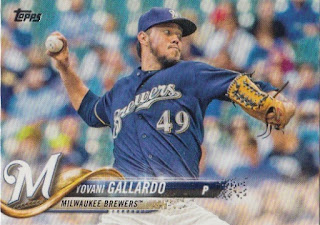 Last year just after spring training ended, I noted that Yovani Gallardo was trying to make the Brewers, failed, and ended up as cannon fodder for the Rangers for a little while. I was hoping he'd make the team so I'd get more Brewers cards of him. Then I stopped paying attention and didn't realize that he did not need to make the team to get a Topps card in Series 2.

This Happy Schnapps song might be the official state song. Wisconsin is well known for its drinking, after all, and there have been a number of times when I'm there that I have wanted to yell this at someone.

It's also what Topps's set production people yell at Wisconsin fans when we complain about the questionable player selection for Brewers players -- like, for example, putting a guy who didn't even make the team in Series 2 instead of people who actually played. 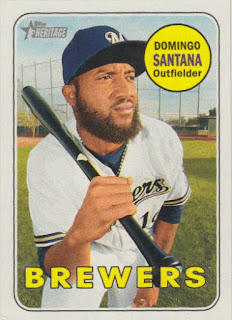 This may be one of the worst looking cards of 2018. Is Domingo Santana Thor? Look at the size of his hand next to the very small bat that appears over his shoulder. I mean, I get and understand perspective, but that bat is all wrong. It's terrible looking. And his head looks like it's the size of its own solar system.

I gotta stop looking at these new cards. They're getting me pissed off all over again!

An appropriately shitty song for a shitty card. 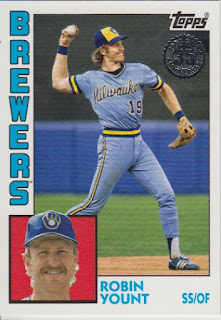 Okay, it's time for the MVP portion of the package. First off, we have a 2019 version of the 1984 Topps for Robin Yount. It's been said before but I'll say it again -- it's cool to see these old designs being reused, but I'd much prefer having the designs used for players who did not appear on the cards the first time around.

Of course, since Yount is about the only former Brewer that Topps has an agreement with at this point (he and Molitor, thanks to the Cooperstown agreements), I'll take what I can get.

You might be noticing a theme here from the Happy Schnapps Combo. I had never heard of them before Matt tweeted about them in passing a couple of days ago. Their whole catalog is either about the Packers or about smelling bad and toilets, it seems.

Granted, with all the beer and brandy old-fashioneds and bratwurst and sauerkraut that get consumed in Wisconsin, it makes sense to sing about "what you know." 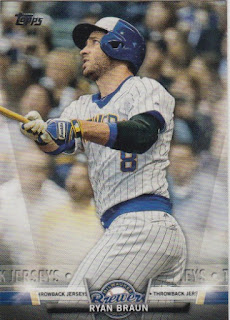 Another Brewer MVP in Ryan Braun. I guess this was an insert last year.

I'm still trying to figure out where I go with my collecting at this point. I've decided once again to start over on Trading Card Database and catalog all my Brewers cards. I cleaned out what was there previously, though, so it appears right now that I have nothing. That's probably as good a place to start as any. I'm not sure what I'll try to collect going forward -- but Braun, Yount, and the next guy will be part of it.

Wisconsin football fans have long hated the Dallas Cowboys in a full-on, irrational way. There are good reasons for that, dating all the way back to the Ice Bowl in the 1960s, to Dallas's claims to be "America's Team" in the 1970s and 1980s, to the playoff battles between the teams in the 1990s, and then to the present with again meeting in the playoffs and the whining that came about with the Dez Bryant catch/no-catch controversy.

It's a different hate than that reserved for the traditional NFC North rivals, but it's a hatred nonetheless. So, of course a truly emblematic Wisconsin band like the Happy Schnapps Combo had to write a song making fun of all the criminals on the Cowboys. 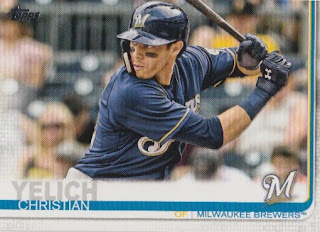 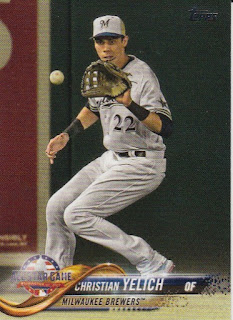 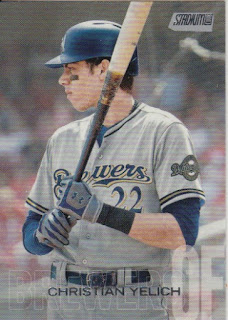 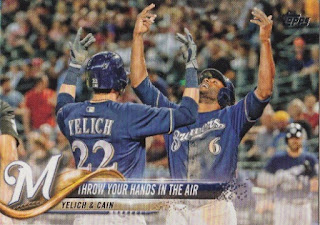 The final MVP to feature in the envelope Matt sent to me is, of course, Christian Yelich. I had a feeling he would take well to Miller Park last year, and it turned out beyond my wildest expectations.

This year has been an odd start to the year for him, though. He hits at Miller Park at a home-field-advantage level not seen since the days of Dante Bichette at Coors Field pre-humidor. On the road, he looks like 2017 Christian Yelich -- a bit of pop, good average, decent slugging, but just a solid player. At home, though, he looks like peak steroid Barry Bonds or peak hotdog eating Babe Ruth -- crushing homer after homer.

Like I said above, the vitriol reserved for the NFC North rivals -- the Vikings and the Bears -- is on a special and different level than that held for other teams. These two songs prove that some. Of course, that Vikings song needs to be updated since it still refers to the Metrodome as the Vikings home field, but I'm sure they can come up with something.

Matt, thanks greatly for the cards, and I hope you have enjoyed the musical stylings of what must be one of your favorite bands of all time.
Posted by Tony L. at 9:34 AM