PWEs and a Little Music

Thank you to all of you who read my post trying to honor the memory of Ray Peters. Your comments meant a lot to me. Ray was truly a special man who will be dearly missed.

In the meantime since my last post, I have been the honored recipient of two single-card plain white envelopes. The first arrived a couple of days ago from New Jersey and my Twitter friend Nick Vossbrink who also blogs at NJWV and, in addition, is one of the two new co-chairs of the SABR Baseball Cards Committee and Blog Editor. Nick is one of those people with whom I feel I could converse about any subject and learn something new. I like people like that.

Nick sent me an awesome thank you note featuring an Auguste Renoir painting of a ballerina that totally pump-faked me into thinking it was an Edgar Degas because whenever I see Impressionists and ballerinas that is a Pavlovian response. 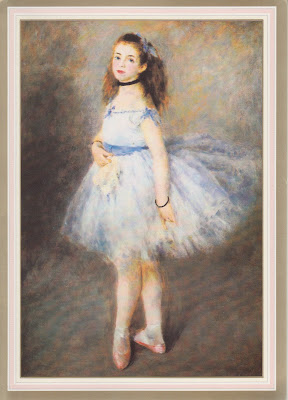 See what I mean? But even now, thirty years later, I still hear the teacher I had in high school for training for the Academic Decathlon competition -- which is where my Impressionist knowledge comes from -- saying, "yeah, but look at the eyes. Those are Renoir eyes."

Anyway, Nick sent me a very cool 1980s oddball to add to my collection of a Giant turned Brewer, Rob Deer: 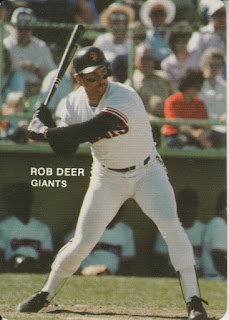 I'm pretty sure Deer is either about to swing and miss or crush the ball. That was what he did. For many Brewers fans, Deer's approach at the plate reminded them of an earlier Brewer hero, Gorman Thomas -- lots of homers, lots of strikeouts, a pretty good number of walks too, and low batting averages that didn't kill the team thanks to the OBP and the SLG.

Next up, a PWE showed up yesterday from Mark Hoyle. Mark has either been buying a lot of potato chips from Utz lately, or else he ran into a deep, cheap vein of these cards at his local card shows.

Whichever one of these it is, Mark was kind enough to share an Utz card with me: 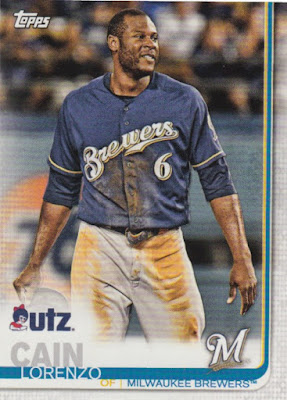 If I were inclined to add any more player collections -- and trust me, I'm more likely to get rid of some than add some -- Lorenzo Cain would be in the running definitely. LoCain is such an upbeat guy, and he's also an incredible center fielder as well. It is unbelievable to me that Cain has yet to win a Gold Glove -- he deserved one last year, in my opinion, so I hope that issue gets addressed this year.

To thank Mark for the card, I think I'll give him faster horses, younger women, older whiskey, and more money -- from Tom T. Hall.

I grew up on country music in the 1970s, and I do recall this song. I probably would not have remembered this song, however, except for Twitter stalking Mark's timeline and seeing that he had interacted with the Great Wes Moore talking about the lyrics to this song specifically.

Now that's what you call a friend -- someone to remind you of a Tom T. Hall song from 1976 that you haven't thought about in probably 40 years.