A Welcome PWE from Bru

We all have times in our lives where we just don't have time for ourselves. That's where I've been the past year. Many nights after work, it was all I could do just to stay awake long enough so I wouldn't wake up at 3 AM.

Yet, I also could have made time for cards from time to time. I just didn't have it in me. I didn't feel like spending time and money on every new card to come around the corner from Topps or Panini or anyone else.

The same thing happened with blogging. I was having more fun -- and it took less energy -- to spout out a one-liner on Twitter or get into a deep discussion with the guys doing season sets like Matt Prigge and Marc Brubaker and Nick Vossbrink about how they went about selecting photos, making the cards, getting them printed (or not), etc. It was a lot of fun checking out Mark Hoyle's daily 4:30 AM post of some crazy rare and extremely cool Boston Red Sox item.

The great thing is that it still is fun to do all those things.

But I guess I missed blogging a bit. I missed finding random songs on YouTube to put into posts. I missed Meeting the Brewers.

So I came back now. As I told some folks on Twitter, I'm back to write when I feel like it about what I feel like writing about.

Sometimes, though, it will be just a good old-fashioned "Look what I got in the Mail today" post -- like today.

Today, I got mail from Bru at Remember the Astrodome -- who himself has gotten busy with other things in life now. He'd built up a few cards that he said he wanted to send me, so let's roll them out! 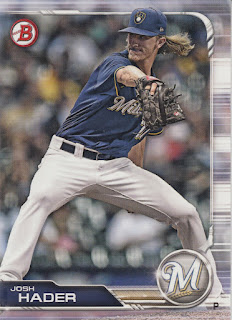 Let's start with the flying hair of Josh Hader. Hader went from being the prospect lefty who came over with Domingo Santana, Adrian Hauser, and Brett Phillips from the Astros in exchange for Carlos Gomez and Mike Fiers (I think the Brewers won that trade -- that's a gut instinct though) to being *THE* guy out of the bullpen who teams have to plan for on a regular basis. I like how the Brewers use him in many respects, though I'd rather have Knebel in the 9th and move Hader around some.

P.S. Josh Hader's entrance music, according to this 2019 Bowman card, is "Renegade" by Styx. Yes, I must post this classic rock saw.


I think that songs been on classic rock radio since I was in middle school. 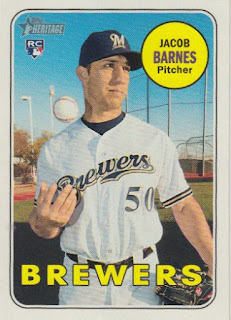 Next up is Jacob Barnes from the 2018 Heritage High Numbers. Due to the fact that Barnes has been scuffling some during this first month of the year and due to him having one minor league option year left, I have a feeling that Barnes will be on the San Antonio Shuttle pretty regularly once the Brewers get Jimmy Nelson back to as good as he'll get sometime late this month or in June. He's been walking too many guys so far this year, but he's a solid bullpen arm. 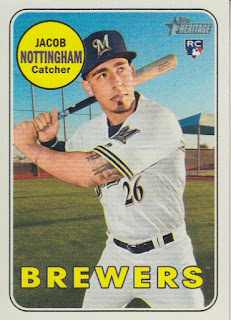 Speaking of the San Antonio Shuttle and also from the 2018 Heritage High Numbers, here's Jacob Nottingham. He was the return for Khris Davis. The thinking at the time was that a catching prospect is worth much more than a ragarm outfielder with suboptimal on-base skills.

It was probably the right move in many respects because if Davis is still in Milwaukee, does the team still go after Lorenzo Cain and Christian Yelich?

We're still waiting for Nottingham to emerge, though. He is still 24, but he has to hit more than he has in Triple-A to prove he belongs in the majors. Here's hoping he develops this year with Yasmani Grandal and Manny Piña in front of him and can be a big leaguer next year. 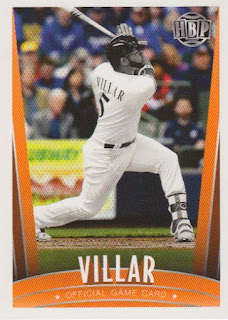 At least Villar had one big year for Milwaukee. Of course, Jonathan Schoop was a massive bust last year down the stretch, but it was worth a try to see if he could be the answer at second for a year as we wait patiently for Keston Hiura. 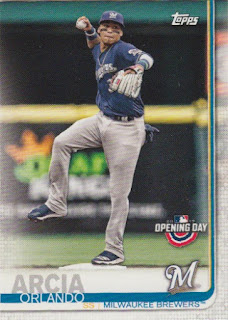 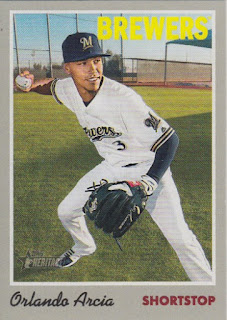 Bru sent me two 2019 Orlando Arcia cards. 2018 was a year to forget for Arcia, whose batting was such a black hole that his defensive contributions were cancelled out in the whole WAR equation on Baseball Reference. He's doing a little better this year in two respects. First, he's already hit more homeruns this year in a month (129 PA) than he did last year over 119 games (366 PA) -- 4 to 3. He's also walking at a better clip -- 9 walks in those 129 PA versus just 15 all year last year.

He's still not great at the plate, but at least he's not an embarrassing negative. 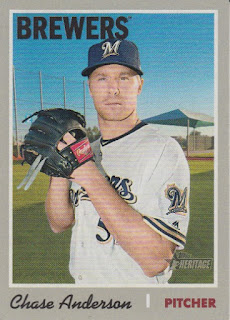 I was hoping that Chase Anderson can help stabilize the rotation, but then he went out and had his callouses on his middle pitching finger -- you know, the one you use to throw a curveball -- bust open. Anderson is a serviceable 4th/5th/6th starter so long as he can keep the ball in the park or limit how many people are on base when he gives up his standard HR every 6-7 innings. 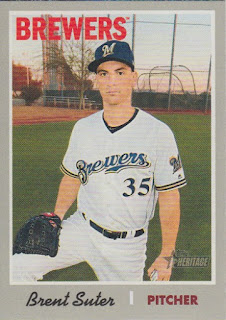 Brent Suter is quickly becoming one of my favorite players on the Brewers. It's too bad he had to have Tommy John surgery last year. He's becoming a favorite for a couple of reasons. First, he's smart -- a Harvard grad who actually played baseball there I'm told and did not use that as an excuse to get in the backdoor through parental bribes. Second, the guy is a glue guy. He keeps guys loose, brings guys together, makes people laugh -- the team is better with him around. 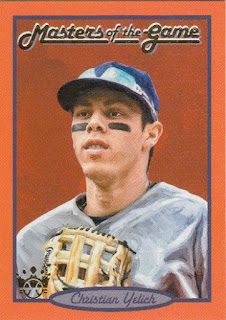 When Christian Yelich was traded to Milwaukee last year, I knew he would have a good year. His swing seemed tailor made for Miller Park's cozier dimensions than the Miami Mausoleum, and all indications were that he was a good "makeup" guy -- someone who would fit in with teammates. That was a big part of why I said I was going to collect his cards.

Many thanks go out to Bru for the cards. Bru, just stick with us on Twitter. We'll be around when you get time again.
Posted by Tony L. at 7:40 PM