I love to read. I have literally hundreds of books in my house -- some of which I've read, others I have not yet read. I've been slogging through a dense biography about Karl Marx over the past several months, for instance, and it reminded me why I put it down the first time I started reading it -- while interesting, it is not a fast-paced book.

Often, though, I will have two or three books going at once. Over the summer, for example, I had a weekend where I had to be in Florida for a trade association meeting and had most of Saturday free. So, I read Jonah Keri's book Up, Up & Away about the Montreal Expos and that team's time in Montreal -- and how it fell apart. It's a great book that I can highly recommend, and it's a fast read -- I read it basically in one sitting over about 4 hours (I read very fast, usually).

Another very easy book for me to get through is one that just came out last week: Gunslinger: The Remarkable, Improbable, Iconic Life of Brett Favre by Jeff Pearlman. 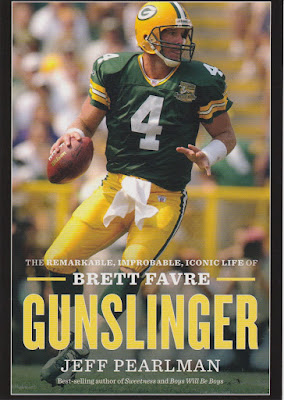 This is actually a scan of a 4" x 6" card that replicates the book's front cover and, on the back, has a couple of the book-jacket quotes that publishers like to use to validate how great a writer or book is.

Pearlman has written several sports books, including the book about the cocaine-using Dallas Cowboys called Boys Will Be Boys: The Glory Days and Party Nights of the Dallas Cowboys Dynasty (which I have also read). He also is the writer who wrote the Sports Illustrated story about John Rocker that led to Rocker's suspension and ultimate downfall.

Pearlman is active on Twitter, and it was on Twitter that he made an offer much like the one that Molly Knight made for her book, The Best Team Money Can Buy about the Dodgers -- if you emailed a screenshot of proof that you preordered the book, then he would send an autographed front plate to paste into the book.

And that's what I did: 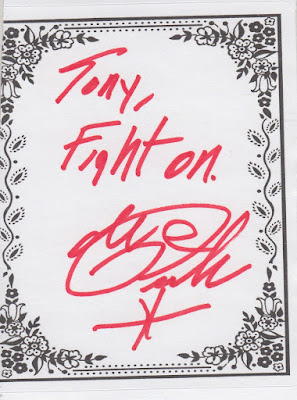 Not sure where Jeff is getting the Southern Cal influence here (he went to Delaware, I went to Vanderbilt and Georgia...) but hey, thanks for the cool autograph for the book. I stuck that into the front of the book, and that's where it will stay.

Now, for the book. There have been a couple of excerpts published online already if you want a flavor for how the book reads. This one on Sports Illustrated talks about how much of a wastrel Favre was during his one-year tenure with the Falcons. A second one on Bleacher Report pretty much confirms what a complete dick Favre was to Aaron Rodgers when Rodgers was drafted -- though Rodgers certainly exacerbated the issues by being cocky and tone-deaf himself.

For me, a lot of the book covered familiar ground. If you knew anything about the behind-the-scenes world in which Favre ran in Wisconsin, you knew that he was a big-time drinker. A number of stories later in his career mentioned his womanizing in past-tense terms until, of course, Favre started sending pictures of little Brett to Brent Musburger's FSU Cowgirl crush/internet sensation/New York Jets sideline eye-candy/Deanna Favre lookalike Jenn Sterger.
Favre and his Hamlet act on retirement over his past several years in Green Bay had worn on me. By the time he was traded to the Jets, I was relieved. It was time for him to go, and it was time for the team to move on. Simply put, Favre viewed himself as bigger than the team by that point, and he loved the attention that his continued on-again, off-again retirement drew to him.

Pearlman did not speak to Favre for this book, but he did speak to over 500 other people in and around Favre's life -- everyone from Brett's mother to drinking buddy and wingman Mark Chmura to Jets OC and destroyer of the Georgia Bulldog football program Brian Schottenheimer.

As with most public figures and professional athletes, there are any number of negatives about Favre. He was an arrogant prick to rookies, he believed he deserved (and he received) special treatment from the Packers in his later years -- to the point of getting to dress in the coaches' room rather than with the other 52 players on the roster -- and he was an alcoholic womanizer who treated his high school sweetheart Deanna like complete crap.

On the other hand, you also get the good -- the arrogance often leads to an ability to overcome setbacks, and Favre needed that cockiness early on in his career. In Favre's second year in Green Bay, the Packers had drafted Mark Brunell out of Washington. Favre was so stubborn at times that Coach Mike Holmgren was perpetually one series away from benching Favre and giving Brunell a shot to play. While a less confident player might have been shaken by that, Favre was motivated by it.

Similarly, any number of stories about the good stuff Brett Favre did -- like the stories that Pearlman put into his prologue about Favre befriending little kids with cancer -- don't sell as many books. Those likely fell by the wayside early on. This is not to say that cutting the feel-good stories was an intentional act meant to make Favre look bad. Rather, it's more an indication that the "juicy" stuff is more interesting; we sort of expect the nice stories more than some of the negative.

In the end, Favre comes across as a complicated human being, sort of as you would expect. He was petulant, caring, obnoxious, vindictive, insecure, annoying, cocky, warm, loving, hateful and hated all at once. In other words, he really is a human being and not some caricature drawn by John Madden on a Sunday afternoon talking about how Favre just plays like a kid with joy and all that. It is an interesting portrait, and it is a good read -- especially if you are a Green Bay Packers fan.

One last thing: I have two of those 4 x 6 cards of the cover. If you want one of them, let me know by commenting below. If more than two people let me know that they want them before Monday, November 7, at 7 PM Eastern Standard Time, I'll do a randomizer giveaway. Otherwise, I'll just give them away. Thanks for stopping by.
Posted by Tony L. at 11:07 AM