Thanks Again to Matt from BWTP!

It has to get boring to Matt from Bob Walk the Plank to read all the thanks and kudos and homilies about the cards that he douses all of us in the blog world with. I mean, is there a blogger out there who has made Matt aware of his/her presence that Matt has not sent cards to?

It had been a while for me in getting cards from Matt. That's my fault, really, since I have been serving as opposing counsel to him in his war with JBF. It's also my fault because I let my supply of padded envelopes disappear, leaving me unable to get many things out in the mail to anyone.

But I did get a little envelope recently from Matt. As always, it had some fantastic cards inside. I'm in a musical mood today -- perhaps it should be more sturm und drang than light and airy with the election tomorrow and all . . . I'm a bit scared for our future with the two candidates we have running, to be honest. But, I need a musical pick-me-up. So, let's turn to the music of West Virginians.

Let's start with the most unusual of these artists:


Wilber Pan a/k/a Pan Weibo a/k/a Will Pan is a Taiwanese Mandopop singer-songwriter and rapper. Pan was born somewhere in West Virginia (according to his really messy Wikipedia page) but moved with his family to Taiwan at the age of seven. I say his Wikipedia page is messy because it contains the following sentence:  "He was offered an athletic scholarship in basketball by a NCAA Division III college, (which do not offer athletic scholarships) but chose to continue his education at California State Polytechnic University, Pomona (aka Cal Poly Pomona) in the United States."

The thing is that the scholarship story came from a now dead link from a Chinese language website -- so there is absolutely no way to tell how right/wrong/mistranslated this "offer" may have been. He has won lots of Chinese language music awards, though, so he must be popular. 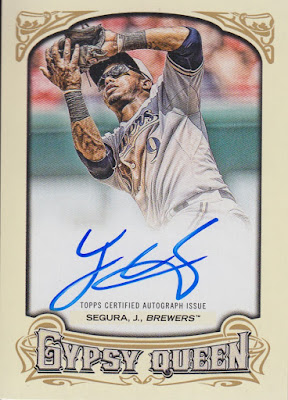 Jean Segura had a really good year this year for Arizona. Like many Brewers fans, I honestly believe that there is no way at all that Segura has the rebound year he had in Milwaukee. His time in town was marred by his son's death, and you have to think that he needed a change in scenery to help him through that grieving process.

I mean, it's nowhere near the same, but my grieving process when I had to put my dog Clea down due to multiple health issues in 2010 was aided immensely by moving in with my now wife. It helped me not to go to the condo where Clea and I lived and find it empty. I can only imagine what it would be like with losing a child.

Also, I'd bet that Segura feels more at home in Arizona with its much larger Hispanic/Latino population over what Milwaukee has.


So, the former host of Hollywood Squares, Peter Marshall, somehow got himself inducted into the West Virginia Hall of Fame. This video is from March of 2016 for Peter's 90th birthday. Peter Marshall is really named Ralph Pierre LaCock, and he was born in Huntington, West Virginia. The above is a funny interview that Fred Willard did with Peter.

Marshall actually did make a number of appearances on Broadway and on London's West End in a number of musicals. In fact, Marshall appeared in the musical Bye Bye Birdie -- a satirical send-up of America's reaction to Elvis Presley -- for its entire 268 performance run.

Also, something I am sure I knew at some point in the past but I had forgotten: Peter's son is none other than former Chicago Cubs, Kansas City Royals, and Yokohama Taiyo Whales first baseman and outfielder Pete LaCock. I think Marshall is actually pointing out Pete in the audience at the beginning of this clip. 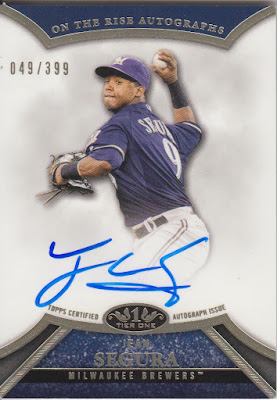 Another fine Jean Segura autograph gets added to my collection. If Segura had not been traded, he would have been fighting with Scooter Gennett for time at second base and with Jonathan Villar for time at short this past season -- at least until Orlando Arcia was called up in August. Segura spent most of his time at second for the D-Backs this year. Again, he had a great year -- 6th in the NL in WAR for position players, according to Baseball Reference -- but I don't think there is anyway that happens in Milwaukee.

Plus, Jonathan Villar is actually a year younger than Segura.


Hawkshaw Hawkins was also born in Huntington just five years earlier than Peter Marshall was. But Hawkins died a long time ago -- on March 5, 1963. The song here, "Lonesome 7-7203," was his only number 1 song, and it probably got there because of his untimely demise.

Hawkins was in Kansas City with a group of artists doing a benefit concert for a DJ's family. One of the other artists, BIlly Walker, got a call and had to get back to Nashville, so Hawkins gave Walker his commercial airline ticket. Hawkins then hitched a ride back to Nashville with the other two artists, Cowboy Copas and Patsy Cline. After stopping to refuel in Dyersburg, Tennessee, the plane took off and hit bad weather about 20 minutes later. The plane crashed near Camden, about 90 miles from Nashville. 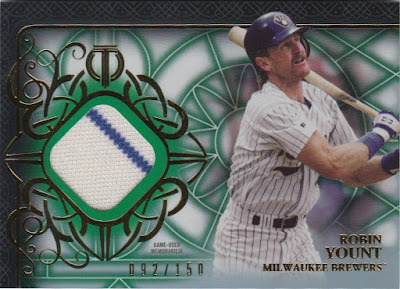 While this excellent card does not deserve such a morose introduction, well, someone had to get it. This is a 2015 Topps Tribute Green Relic card serial numbered to 150. These Topps higher end cards tend to get lost to me when it comes time to put team sets together.

It's not like I see too many Tribute singles just laying around at the card shows I attend, and any relic serial numbered to 150 never comes terribly cheaply on eBay or any other outlet. It's a shame that there are so many of these types of cards around because it makes all of them less desirable.

There is something to be said for scarcity of products just as much as there is scarcity of a particular card. If there are 6 different sets issued and each has 5 parallels serial numbered around 100, you're looking at 3000 "higher-end" cards available. People still expect a premium -- even if that is not really that scarce and even if the only reason this one is numbered to 150 and some other card with the same photo and a similar cloth swatch is numbered to 175 is that this one is green and the other one is blue.

Bill Withers was born in someplace called Slab Fork, West Virginia -- a place that apparently has 202 people in Raleigh County not very far from Beckley. Slab Fork is in the heart of coal country, and there are some incredible photos you can see when you look at the Google Image Search for it.

Maybe it was this rural upbringing that led Withers to record his best known song -- "Lean On Me." I know a lot of children of the 1980s know this song for the Club Nouveau remake, but this version from Soul Train is just more soulful and seems almost more meaningful too.

I went through Bill Withers's part of West Virginia back in 1993, when I had a summer job working for a guy who contracted with furniture companies to install furniture on institutional projects. My first ten days of working with him was spent at seven different state parks in West Virginia -- Bluestone, Babcock, Canaan Valley Resort, Lost River, Cacapon Resort, North Bend, and Tygart Lake.

It's a beautiful state, and this song really gives a feel for the kind of people that Bill Withers sang about. Yeah, there were a lot of mountain folk. Many of them were not well educated, and most of them had not spent much time outside of their hometowns (well, other than at Cacapon, which is about 2 hours from Washington, DC). Most of them worked hard, scratched out a living as best they could, and were as excited to meet someone not from their town as I was to be in West Virginia.

Actually, they were far more excited than I was. But I was scratching out my own living. 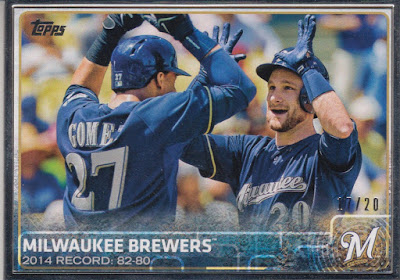 Speaking of excited, how about these 2014 Brewers/2016 Texas Rangers? This is one of those framed cards that Topps has been doing with its flagship set, and it is serial numbered 17 of 20.

Word came out today that Carlos Gomez is apparently seeking a long-term deal -- up to five years in length -- as a free agent. Scott Boras, in his effort to sell ice to Eskimos, thinks that Gomez can get a big payday because Gomez is a "rare player" coming on the market. Boras is correct about that -- there aren't too many players who would think that they deserve a five-year contract just two months after getting released. As the Rangers website I linked to says, it's possible that Gomez could end up hanging out on the market for a while thanks to this type of talk.


Brad Paisley is 10 months younger than me, and he was born in Glen Dale, West Virginia, near Wheeling. My wife likes Brad Paisley a lot -- not as much as she likes Luke Bryan or Carrie Underwood, mind you, but she likes Brad Paisley. He has a number of hits, of course. I like this video and song for the world travel involved and for the point it makes -- that as much as he enjoys all the great stuff he has seen around the world, he still misses his home.

It's one of those songs that can make people wistful for wherever it is they live, come from, or wish they were. 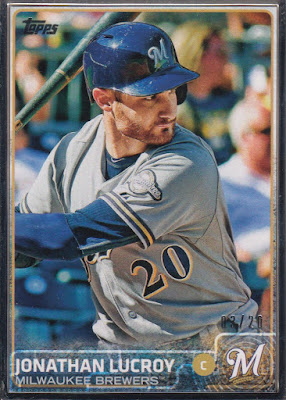 A guy who understands a thing about Southern Comfort Zones is Jonathan Lucroy. He turned down a trade to Cleveland -- and what might have still been a trip to the World Series -- and instead got to go nearly home to Texas. Lucroy grew up in Florida, but really is a southerner despite that. I can totally understand that mindset too. While I enjoyed growing up in Wisconsin and enjoy getting back up there every once in a while to see family, the fact is that I'm much more of a southerner than a northerner -- 21 years in Georgia with 4 years in college in Tennessee will do that to a person.

As always, Matt, many thanks for the great cards. I'm sure most of these bands aren't really in your musical wheelhouse, but I hope you liked them just the same.
Posted by Tony L. at 8:37 PM