After I took on the challenge of listening and commenting on the 10 songs that Kenny a/k/a Zippy Zappy posed to me (and don't worry -- I'll give you more commentary!), he promised that he would send me some cards as a reward. 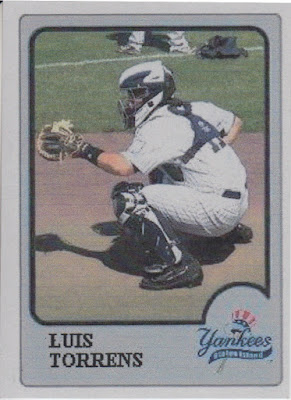 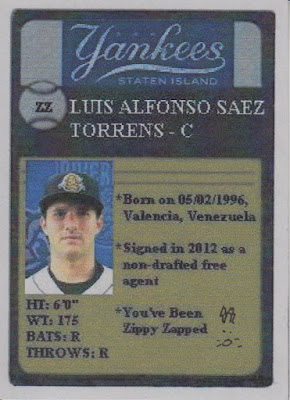 When you see the Torrens leading the way, you know you've been Zippy Zapped. See, it says so right on the card. That confirms it. 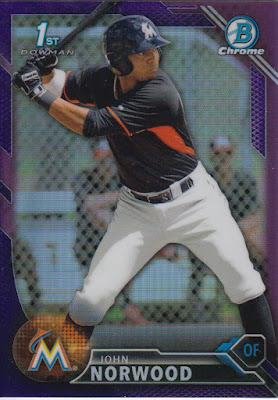 When I first opened the package, I was a little confused. I know ZZ knows what he's doing, and that he must be sending this card to me for a reason. That reason became eminently clear when I turned over the card: 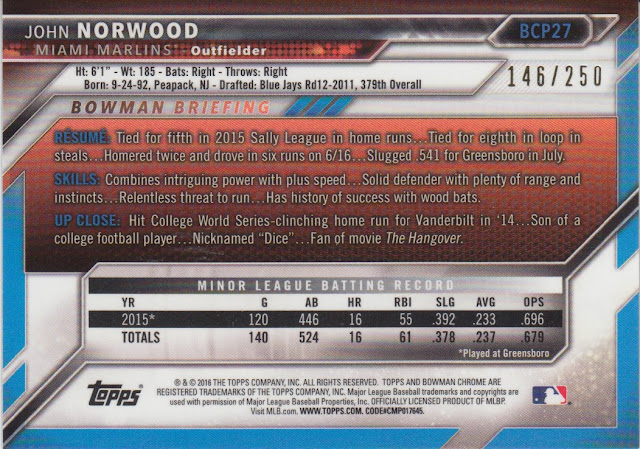 Yes, it's a beautiful chrome card numbered out of 250, but his Up Close section holds the clear answer: "Hit College World Series-clinching home run for Vanderbilt in '14." Ah yes, there it is. He hit the homer off Virginia's Nick Howard -- who had been the Reds 1st Round pick in the 2014 draft (and who currently sports a less-than-stellar K/BB ratio for his minor league career of 0.88 -- no kidding, he's walked 101 and struck out 89 in 112 innings).

Funny thing, though, is that Norwood made it all the way through that same 2014 draft completely undrafted. The Marlins scouted the Cape Cod League heavily, and Norwood looked good with a wood bat. So, to buy out Norwood's senior year of college, the Marlins handed him a $275,000 signing bonus. Norwood has made it to the Florida State League now, and actually looked okay there -- .271/.347/.397 on a Jupiter team that hit .237/.308/.322 and in a league that hit .250/.321/.356.  He was pretty age-appropriate there too, so hopefully that's a good sign that he's on his way to the pros.

Now, I have my doubts that I'll start a John Norwood collection of any kind, but this one will go into my "Random Cards I Like" binder next to a few soccer cards, a couple of Georgia Bulldog football players, and some other random things I've gotten over time.

Thankfully, though, ZZ didn't stop with Norwood. But, let's use Norwood as a crutch for this post...Norwood's favorite musical artist is Jay-Z, so that's what will power me here.


Let's start with "Otis," a song with Jay Z, Kanye West, and featuring Otis Redding. I swear I hear a little sample of Spandau Ballet at the beginning.

What they do to this car in the video is just wrong. Yeah, sure, I guess all they are talking about is how much money they have and all that, so they can afford to tear up that Mercedes. But damn, why? 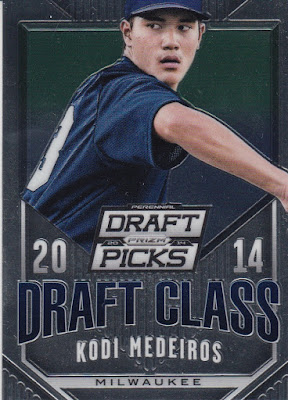 That is usually the response I have to seeing a Panini Prizm card. "Damn, why?" DeMuth is shown in his college uniform at Indiana University -- airbrushed away so don't sue Panini! -- and Medeiros is probably shown in his high school uniform. From this card, he could be a conehead, though.

DeMuth finally made it to Double-A this year. I say finally because he was drafted after his senior year, so he has to develop quickly. DeMuth's biggest problem may be the rather imposing shadow being cast by 2016 draftee Lucas Erceg (a kid with an incredible story), the Brewers 2nd Round pick in 2016 who, by all indications, is a very talented player with a strong potential to move quickly.

Medeiros was the 1st round pick for Milwaukee in 2014. As happens for high school pitchers sometimes, his development has hit some speed bumps due to his inability to throw strikes. He's still rated as the 12th best Brewers prospect, so there is still hope. He is only 20, after all.


Yeah, okay, Jay Z and Pearl Jam together playing "99 Problems." This reminds me of the crossovers that happened about 25 years ago when Anthrax and Public Enemy played together, except that at least Public Enemy let the guys from Anthrax actually sing/rap along with them rather than turning them into some kind of glorified backup band.

I mean, "99 Problems" is a good song. Don't get me wrong here. It's just that if you're going to pair Jay Z with Pearl Jam, how about giving Pearl Jam something to other than play their guitars?

On the other hand, I think we can hold it against Anthrax that their existence probably led directly to the abortion called Limp Bizkit. 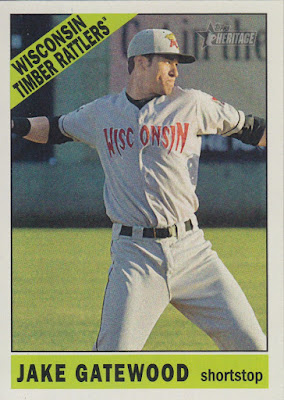 A couple more young guys. Wagner was part of the Jean Segura trade to the Diamondbacks after the 2015 season. Of course, the Brewers got Isan Diaz in that trade, so I'm okay with that.

So, this song is 13 years old, but it rocks. "Dirt Off Your Shoulder" has a great grinding beat that you can't help but bob your head along with and a hook that gets stuck in your head immediately. Thank Timbaland for this.

Plus, you can't go wrong with a rap that includes the line "I check cheddar like a food inspector." You really can't. Unless that Italian dude that ZZ was listening to before was the one saying it. 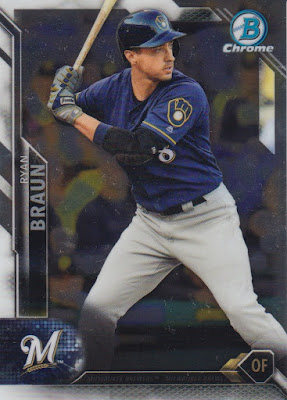 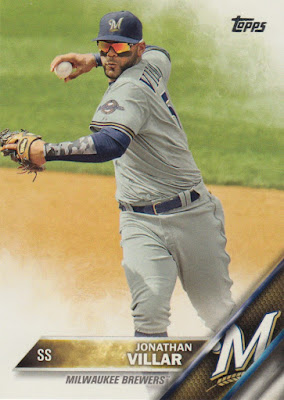 The two guys on the 2016 Brewers team that deserve an anthem like this are easy to name -- Ryan Braun and Jonathan Villar. I'm fully into the "Ryan Braun is an a-hole but he's our a-hole" feel right now after Braun's come back season. That probably means that he'll get traded this offseason to the Dodgers for Puig and a couple of minor league arms, but hey, that'd be cool too so he wouldn't be our a-hole any more.

Jonathan Villar is like a shortstop version of Carlos Gomez in some respects. He makes some crazy decisions on the basepaths from time to time, and he'll get thrown out doing something dumb like trying to go from first to third on a bunt or something (no, I don't think that happened). But, he makes things happen good as well. The upside, though, is that many in the organization think he is eminently more trainable than Gomez was -- that the team will be able to adjust his thinking somewhat without taking away his ability to be aggressive. I hope so. I like him -- and all he cost was a Cy Sneed (who, truth be told pitched respectably in the Texas League this past season...but he might be Mike Fiers reincarnated).

A little shout out to ZZ here -- not only with the "Empire State of Mind," but also the little A-Rod cameo at the beginning of this video from the American Music Awards from 2009. This song is damn cool, and Alicia Keys has an incredible voice.

You know what's fun, though? Falling down into the rabbit hole that are comments on YouTube. Between trying to figure out what some of the people are actually saying, following the trolls in their flame wars, and then getting past the spam merchants, it's actually incredibly entertaining. 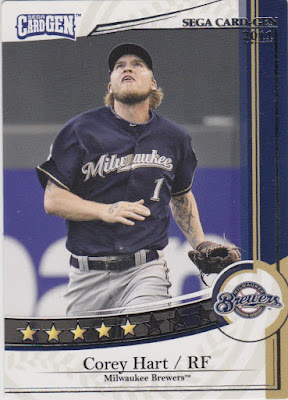 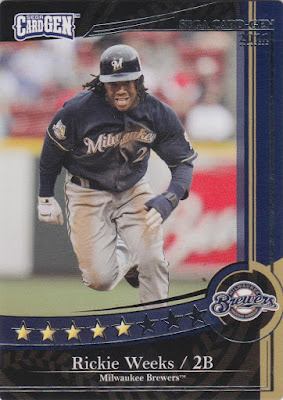 When I think of Zippy Zappy and New York, I think of the Sega Card-Gen cards. ZZ is the guy who first sent me cards from these Japanese releases...and to think he kind of had to talk me into taking the first ones. That was my own ignorance, of course -- once I found out what they were, I snapped those suckers up immediately. Now, I look forward to getting more of them. So, when I got these two from ZZ in his most recent mailer, I was super excited.

Excited enough to play that Japanese song again by Frederic!


Here's hoping this is enough to get it stuck in P-Town Tom's head. Maybe it can be the victory theme for Tom for the Cubs!