Behind the Scenes at SunTrust Park

Sometimes, you get lucky. I got lucky this week. One of my friends here in Atlanta seems to know about everyone in the legal industry in town. One of his good friends asked him if he wanted to take a tour of the construction of the Braves' new stadium, SunTrust Park. He said, "of course!" and then was asked to put a group together for a tour.

Our group included 4 or 5 judges and a number of prosecutors and former prosecutors. I fell into the group of "played fantasy baseball," but that did not matter to me. Being a construction lawyer, though, getting to go on this tour was like the clichéd kid in a candy store. I was so excited for the tour, and it did not disappoint.

The thing that excited me most was the fact that I could take photos in the stadium. I didn't hear any restrictions on posting pictures either, so here goes.

First, here are some photos from across the street of the outside of the stadium from behind center field: 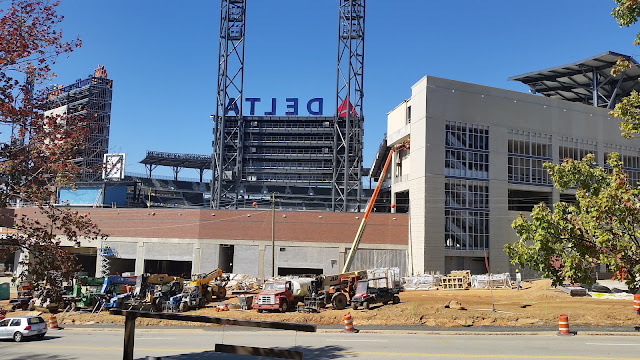 My first thought on seeing the stadium was that, from the outside, SunTrust Park is Turner Field plopped down in the suburbs. It's the accoutrements that do it -- the red brick exterior, the Delta sign on top of the scoreboard, and, as I found out on the tour, many of the same amenities that the Ted has are echoed at SunTrust Park. 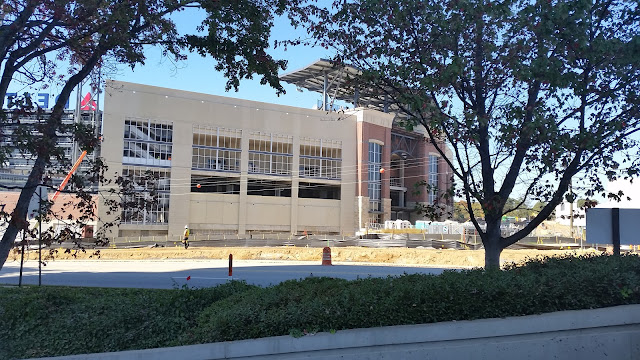 The construction geek in me would like to point out the very attractive precast concrete architectural panels on this portion of the stadium. 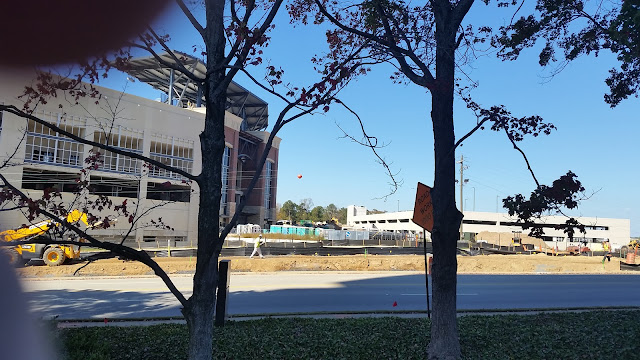 The construction lawyer who is a member of the Florida Precast Concrete Association also would like you to look at the very attractive precast parking deck to the east of the stadium. 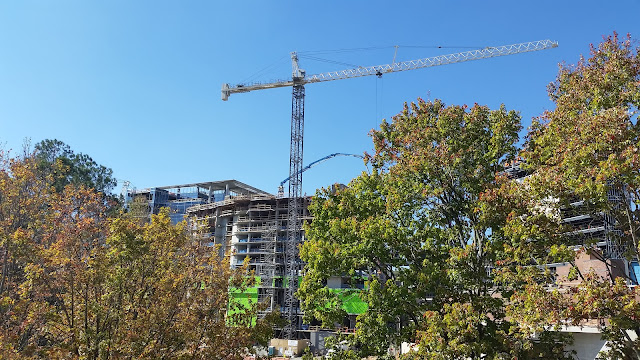 The small blue crane-like extension under the big tower crane is actually a concrete pour taking place. That building is going to be an Omni Hotel right outside the stadium. While it is not a part of the stadium, like the hotel at Rogers Centre in Toronto, this hotel will be tall enough to where rooms above the 8th or 9th floor will be able to see into the stadium and watch the game. Just be sure to close your blinds if you and your mate get amorous, though. 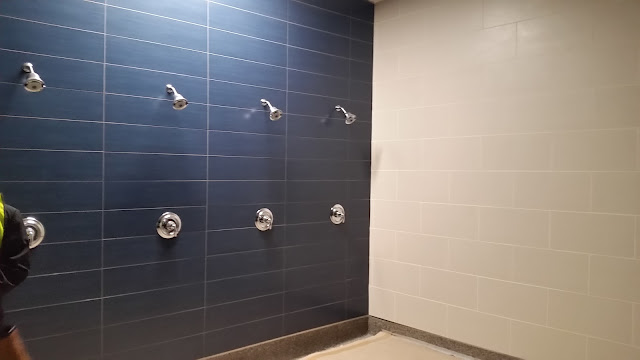 I mentioned this on Twitter yesterday, and I'll ask the question again (as did everyone in our group): why would millionaire athletes be so okay with showering in gang showers as if they are in middle school or prison? I mean, my freshman and sophomore dorms in college had shared shower facilities, but even there we had separate stalls. Maybe it's just the high quality showerheads that make it all better. 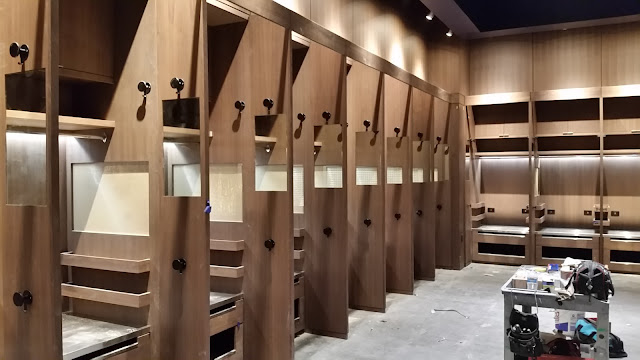 The electricians apparently had just finished installing and electrifying the lights over the lockers in the Braves locker room yesterday. It's a pretty nice locker, certainly. It will almost certainly be the only time I am ever in the Braves locker room in person, so it was pretty cool to see this. They have enough lockers in here for the full September rosters plus a few DL guys.

Across the hall from the players' locker room is the bat boy's locker room. That facility had a few bigger lockers for the somewhat older kids and then a couple of small ones for the "junior" bat boys. 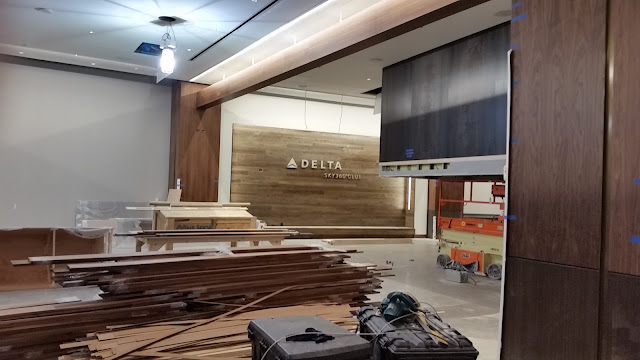 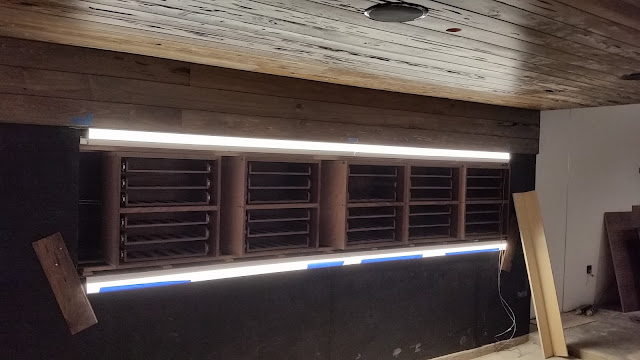 SunTrust Park actually has far fewer corporate suites than most stadiums. As this story points out, there are only 32 suites -- the second-lowest number in baseball ahead of only Kauffman Stadium's 25 suites. The Braves made the decision to increase club seats instead.

The top photo here shows the Delta Sky 360 Club area. That Delta sign was constructed using reclaimed wood, which certainly gives it a cool effect. This club will be available to the people whose seats are in the lower deck right behind home plate.

The bottom photo shows a wine rack in the SunTrust Club. That's the super-high-end club for the 375 fanciest season ticket holders who will have the first row or two along the field as their seats. The SunTrust Club will have these wine racks for its members to bring along their favorite bottles of wine, check them in, and have them at their disposal at any time they want during a game -- and possibly even outside of regular game days. 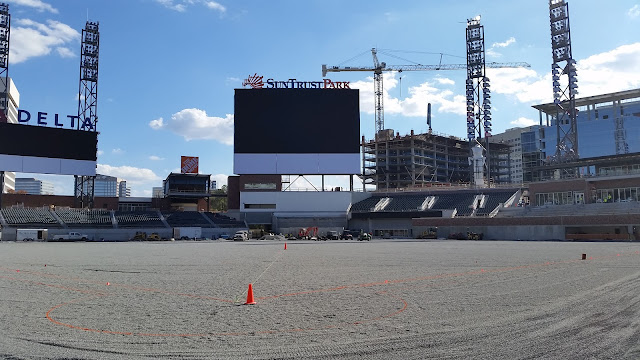 The closest cone is where home plate will be; the far cone is second base. The distance from home plate to the backstop is tiny -- it's probably as small as the area that Wrigley Field has behind home plate. Throughout our tour, we kept hearing that the goal for this stadium was to feel more intimate and have people feel closer to the action than Turner Field does. As this shows, that goal will likely be achieved -- at least behind home plate.

And yes, I'm standing at the wall behind the plate and not on the field.

That intimacy does come at the price (for the cheap seats) of being higher above the field -- though any upper deck seat tends to inspire feelings. You can see what I mean in this next photo: 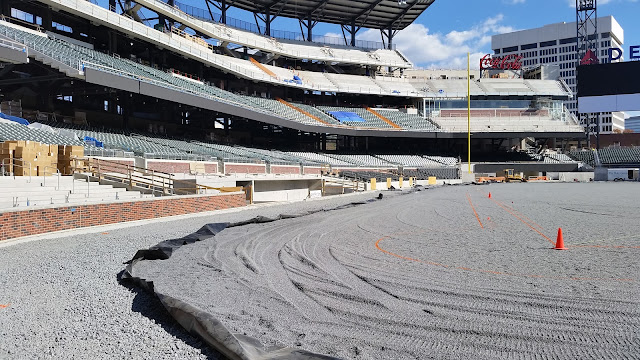 The view down the third-base line. While foul territory looked small to me, that's a bit of an illusion -- as this story mentions, there may be a little bit more foul territory at SunTrust Park than at the Ted. Braves GM John Coppolella expects it to play slightly better for hitters than Turner Field does, I would agree thanks to the fact that the right field power alley is 15 feet closer to home plate than Turner Field's similar dimension. 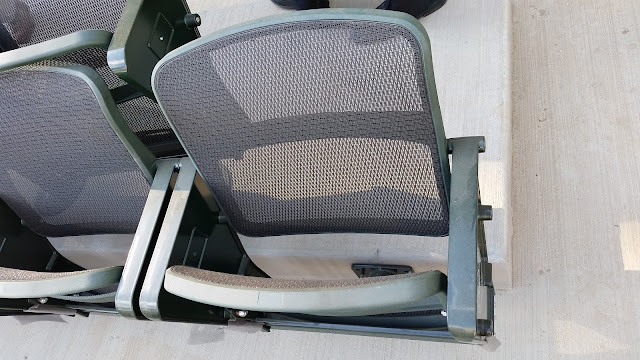 Another amenity for the high rollers are these mesh seats. A company called, of all things, 4Topps manufactures these. The mesh seats are becoming popular these days at stadiums around the country as a way to incorporate more comfortable seating -- and breathable seating, which is very important in Atlanta's hot summers -- to improve the experience for patrons. A lot of stadiums have used these with half-moon tables (see below for the artist's rendering for SunTrust) for patio seating. 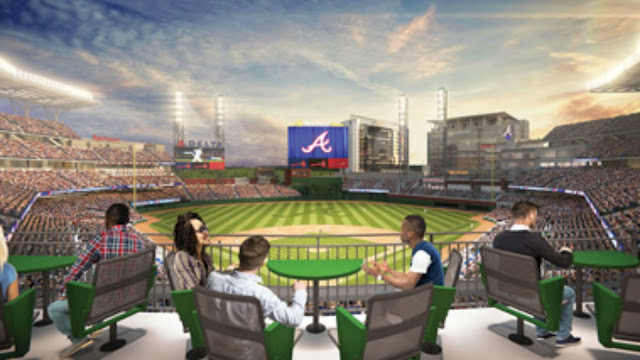 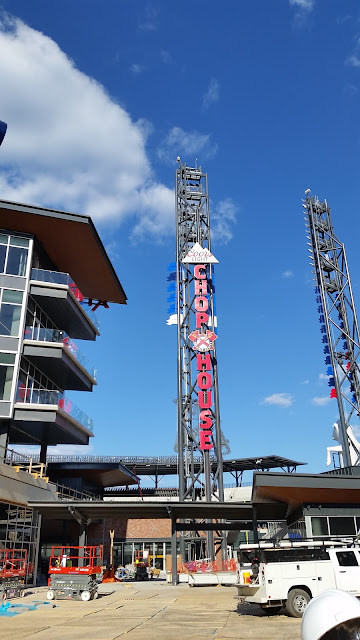 One of the more fun places to watch games at Turner Field is the Chophouse. It's a bar inside the stadium where people can stand or sit after getting into the stadium for cheap -- it was $5 at Turner Field for such access. At SunTrust Park, the Chophouse is getting an upgrade. It's closer to the field, for one thing. It now also has multiple levels, including party suites at field level behind the right field fence that can be rented out for parties. 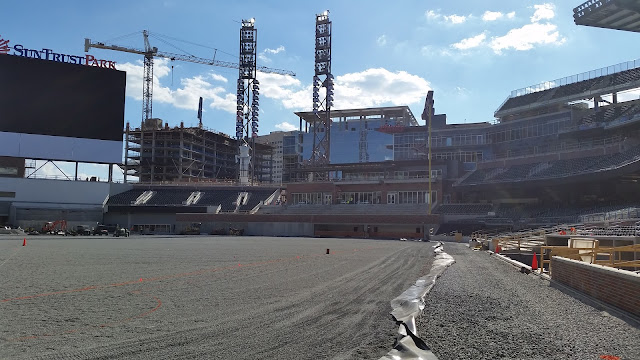 This view from behind home plate shows you where those party suites are.

In front of the Chophouse, there is a great seating area featuring those mesh seats but also tables with beer taps and which include a food and beverage cost in the price of the ticket. It's not an all-you-can-eat/drink area, but it is a pretty cool amenity. But think about this: with that many seats and beer taps at each table (probably about 40-50 tables, as a guess), it will take one heck of a beer keg to keep up, right? 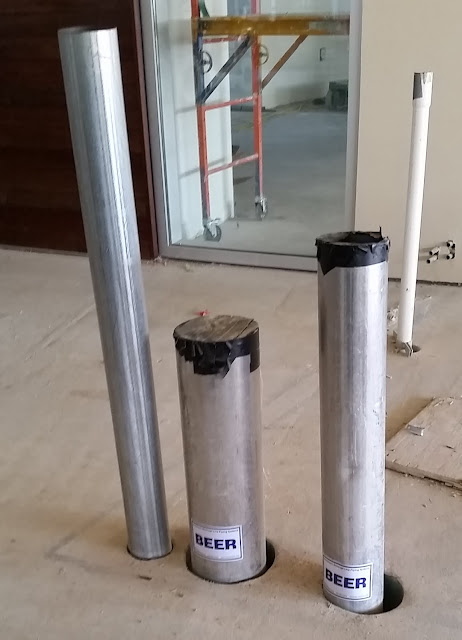 Or, maybe it will just be one heck of a huge storage tank in the bowels of the stadium. I would estimate that the fatter of the two pipes is maybe 5 or 6 inches in diameter. There are pipes for soda as well, but those aren't nearly as interesting as the beer pipes.

I hope you enjoyed this little behind the scenes tour. I certainly did. I think the new stadium will be a nice upgrade in many respects for the Braves.
Posted by Tony L. at 10:56 AM