As the world changes and information becomes available at everyone's fingertips, a lot of companies have fallen way behind or by the wayside entirely. Nearly everyone who is old enough to have been able to turn on a computer in the 1990s probably used America Online to first get online. I certainly did. Yet, now, AOL struggles for relevance and the guy whose voice welcomed millions of us online (after the obligatory cracks and beeps of our modem connecting) now is an Uber driver in Ohio.

In our little world of baseball cards, the card companies, too, have struggled to stay relevant. Ever since the heyday of the early 1990s, companies like Fleer, Upper Deck, Donruss/Playoff, Pinnacle/Score, MLB Showdown, and Topps have tried various gimmicks to get new collectors interested in cards. Let's be honest -- the new gimmicks were not really aimed at existing collectors, though if those things helped get people to buy more packs, then sure, that would work too.

The latest craze, of course, is Topps Now, which was so successful so quickly that Topps expanded it almost immediate from baseball into MLS, UFC, WWE, politics, and television shows I've never watched. Indeed, Topps is continuing to issue cards even today -- issuing cards for the Players Choice Awards (I guess issuing 18 for the Gold Gloves would have been too many, or maybe they didn't notice the Gold Gloves being awarded on the night of the election...morons in MLB).

Anyway, as many of you know, I've been tracking Topps Now. I tracked the cards all the way through the end of the regular season to tally up numbers on which teams were seen most frequently and which were ignored the most. I stopped at card 536 -- the "Giants clinch Final NL Wild Card Spot" card.

So, let's go to the lists instead, counting backwards from 30 to 1 in terms of fewest to most.

The Diamondbacks got only two cards all season -- Zack Greinke's 3-hit shutout for career win #150 on June 7 (281 purchased) and Paul Goldschmidt's walk-off homer on August 22 (294 purchased). Arizona finished 69-93 and cleaned house after the season, so perhaps the low number should not be a surprise. But the D-Backs did have 8 walkoff wins (including 3 out of 5 games in August on the 22nd, 24th, and 26th), so perhaps they should have gotten a few more.

The only reason the Rays have three cards is that Matt Moore featured on the "Traded" card along with Jonathan Lucroy and others. The Rays had three walk-off wins, none of which featured on a Topps Now card.

To get to 6, you have to include the Prince Fielder retirement card and the Jonathan Lucroy traded card. The other four were Aaron Hill, two team cards (one for the team's second triple play and one for scoring in every inning in a game in August), and one for Chris Carter hitting his 40th home run. The Brewers had only one walk-off win all year, and it was lost in the All-Star shuffle. 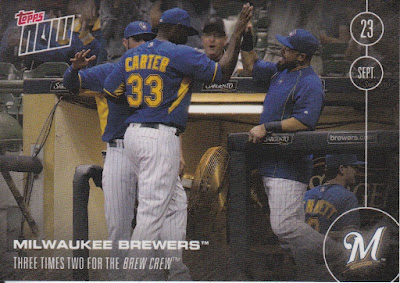 Considering this team went to the playoffs, finished 89-73, and led the American League in attendance with 3,392,099 people at their games, it's hard to believe that they got only 8 cards. But it is pretty easy to understand why this might be: shipping costs to Canada being what they are might have limited sales of their cards. The top seller in the regular season was a Josh Donaldson card at 524. Still, there should be more.

One of these was for having the first overall pick in Mickey Moniak. Three went to rookie pitchers. Ryan Howard only got one card.

Oakland gets to 10 by including Jimmy Foxx showing up on one of the 7,402 David Ortiz Now cards (more on that in a minute).

The Reds got to 10 by having a player on the traded card, a player on the "MLB Turn Back the Clock" card (#270), and with Frank Robinson showing up on an Albert Pujols milestone card.

The Twins count includes another Pujols milestone card (with Harmon Killebrew) and a card for the batting titles being renamed for Rod Carew and Tony Gwynn.

Topps should have just had a separate ToppsNow program just for Ortiz. 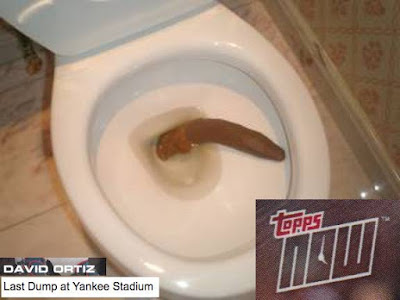 I don't know why I find that funny, but I do.

The Atlanta Braves were absolutely terrible until literally the last month of the season and finished just 20.5 games worse record-wise than the Blue Jays. But they got 15 cards.

Topps paid attention to the Royals as long as they had to. Almost all of these cards were before the end of July. Also, the Royals were the only team to feature an insect. 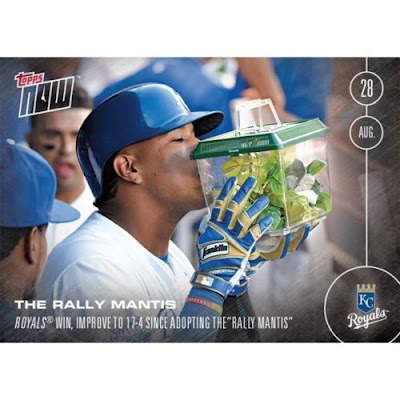 This includes sharing the Eric Kratz card with the Astros and a Roberto Clemente appearance on an Ichiro card.

One of the best rookies of the season was Aledmys Diaz of the Cardinals. The 25-year-old from Cuba was an All-Star immediately and hit 17 HRs while slashing .300/.369/.510. He got 2 cards, or as many as David Ortiz had in April.

That counts Prince Fielder on both teams, since his card showed him in all three uniforms he wore. It also includes an Al Kaline cameo on an Ichiro card.

The Rockies finished two games better than Milwaukee, 6 games better than the Diamondbacks, 3 games worse than the Pirates, and 11 games worse than the Cardinals. But apparently it was a memorable season nonetheless, apparently. That might be because Trevor Story -- the Topps poster boy for April who signed off on a splashy exclusive signature contract shortly after a good start -- had 3 of the first 9 ToppsNow cards and 6 total before getting injured. Topps loved them some Trevor Story.

Is it surprising that the Indians were relatively ignored? Just six more cards than David Ortiz? I don't think it is. After all, Cleveland is in the Midwest and is not the Chicago Cubs.

The Marlins lept up the charts for cards thanks to the Ichiro-gasm around his 3000th hit (I'm not saying it was unjustified, mind you).

The Orioles had the same record as the Blue Jays -- 89-73. Mark Trumbo hit a lot of homers that ended up commemorated on cards. He appeared on 6 cards total.

The Giants edged out the Orioles thanks to a Willie McCovey cameo on a David Ortiz card.

Lots of Albert Pujols in the set too. While I picked on David Ortiz for being on 14 cards, Pujols wasn't far behind -- he was on 11 of the Angels 25 total cards.

Carlos Correa appeared on 8 cards, including one for a "dramatic walk-off single." Of course, that was in May, when seemingly every walk-off got a card.

This one is a little surprising with the star power on the team. Daniel Murphy appeared on five cards, Bryce Harper was on seven, and Max Scherzer was on just two. Of course, 27 cards is still a lot.

Yes, we're getting into the major media market teams now, i.e., the teams that Topps pushes because they sell cards and make money. Especially Bartolo Colon (5 cards), Curtis Granderson (4 cards), Noah Syndergaard (4 cards), and Yoenis Cespedes (3 cards). There are probably others with more here, but the Mets are fairly evenly dispersed.

Clayton Kershaw was on 6 cards.

Gary Sanchez was on eleven, and that doesn't count the two different relic cards Sanchez had. That is 11 cards for fifty-three games in which he played in 2016.

Look, Sanchez was excellent in his first 55 MLB games (his 0-for-2 in 2 games last year getting factored in there by me...not sure if Topps did), hitting 20 homers in 201 at bats. He's 23, so maybe this is a new level of performance for him. It is not, however, consistent with his minor league performance. Just saying.

Kris Bryant was on 8 cards. Gary Sanchez was on 11. I think Topps overdid the Gary Sanchez.

It should come as no surprise that the Red Sox got so many cards. David Ortiz's retirement after an excellent season helped that, as did the young talents like Mookie Betts, Yoan Moncada, Xander Bogaerts, and Jackie Bradley Jr. Hell, Andrew Benintendi got more cards (3) than the Diamondbacks and Paul Goldschmidt got.

Topps pushed the Red Sox, though -- the Sox appeared on the Father's Day card, the Turn Back the Clock card, and the September 11 card -- oddly enough, from Rogers Centre in Toronto -- in addition to their own player cards. 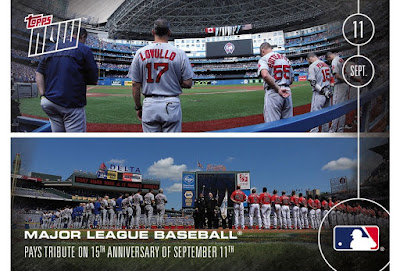 These numbers should not be surprising, in the end. The better teams get publicity and accolades and have more positive moments than the bad teams do. But I can't help but feel that Topps is infected with some of that elitist bias on which some people are blaming Hillary Clinton's election loss.

For Topps, it's being based in New York City that leads to a lot of groupthink about what games or events are worthy of being on cards. Yes, I get it -- it's about the money. But even the least purchased baseball Topps Now card (my man Chris Carter's card #523 sold just 178 cards) would be the second highest selling Topps Now MLS card, being behind only Frank Lampard's hat trick for NYCFC selling 255 cards on July 31 (The lowest selling? Toronto FC's first playoff win sold a terrible 34 cards on October 26).  At $10 a card, Topps is still making almost $1800 (gross, not net) on the Chris Carter card.