A fairly new blogger around the card world is Diamondbacks fan Jay P., the proprietor of Cards My Mother Didn't Throw Out. Jay P. has quickly integrated into the trading world, as evidenced by the fact that he joined in the SuperTrader group that JayBarkerFan put together.

Even before joining that group, Jay P had sent me a trade package. So, this is the second time in 2016 that I get to feature a few cards from Jay P. But, since I used up the Arizona music angle the last time, well, y'all are stuck with my writing and seeing where it leads today.

Let's go to the cards and see where the stream of consciousness leads. 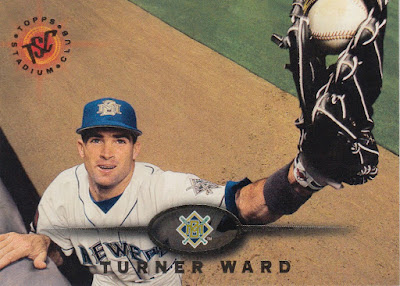 Turner Ward was a hotshot prospect in the Indians system after he was traded there by the Yankees along with Joel (Mule) Skinner for Mel Hall. Ward then went to Toronto for 1991 in another trade (with Tom Candiotti in exchange for Denis Boucher, Glenallen Hill, Mark Whiten, and that ever popular trade ingredient called cash). He stayed in Milwaukee for three seasons and really did not impress -- .233/.328/.362 in 655 plate appearances -- so the Brewers released him.

Ward went to Pittsburgh for parts of three seasons thereafter before getting released two-thirds of the way through 1999. He hooked on with the D-Backs -- creating a tie between CMMDTO and Off Hiatus -- for 85 plate appearances over two seasons. He finished his career with 17 plate appearances for the Phillies in 2001.

Thereafter, Ward eventually went into coaching. He got to return to where he grew up and attended college -- Mobile, Alabama -- to manage for a couple of seasons in 2011 and 2012 with the Mobile BayBears. He moved up to the majors to be a hitting instructor with the Diamondbacks for three seasons. He's now the Dodgers hitting instructor.

I wonder why so many less-than-great hitters end up as hitting coaches. Shouldn't a team want Barry Bonds rather than Turner Ward? 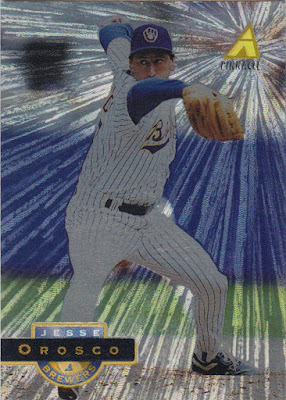 I see Jesse Orosco with the sun shining on him from the Pinnacle logo, and, for whatever reason, the first thing that came to mind was "The Old Man" since he stayed in the major leagues until he was 46 years old in 2003.

So, enjoy Charlton Heston reading Ernest Hemingway's "The Old Man and the Sea." All 2 hours and 22 minutes of it.

Heston's voice is compelling. The video version, though, is not. 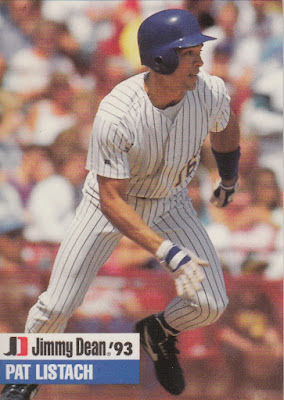 When I think of Jimmy Dean, though, I don't necessarily think of sausages. You see, Jimmy Dean was a real country music singer and variety show host in the early 1960s. He founded the Jimmy Dean Foods in the late 1960s, and he turned it into a very successful company before selling it to Sara Lee in 1984 for $80 million.

That's a really nice return on investment for a guy who sang one of those great story songs of the early 1960s about a giant of a miner named Big Bad John. 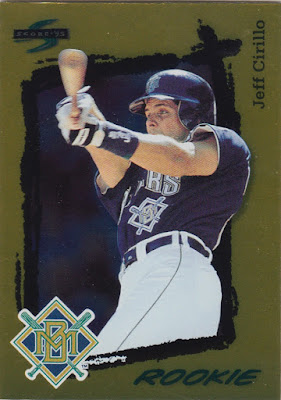 When I think of Gold Rush, I think of college. Yup -- another Nashville story. About three or four blocks from Vanderbilt's campus, there is a bar/restaurant called The Gold Rush. I know for a fact that I stepped foot in that bar perhaps once or twice during my entire time in Nashville. I really didn't drink that much in college, in large part due to the fact that I needed to keep my money for other pursuits -- frivolous things like food and books.

Anyway, it's not a bad place -- it is just a dive bar where people go to eat a little bit, smoke cigarettes, and watch a scuzzy rock show. If I lived near Vanderbilt today, I'd probably frequent the place (other than the smoking part, it sounds like my kind of bar, to be honest). In college -- wow, no chance. 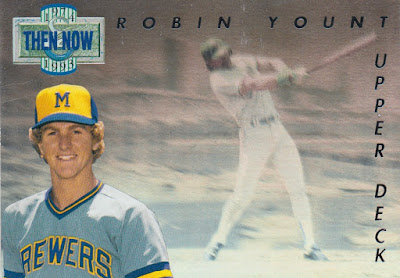 Not a bad looking card generally. It's odd how the state of the baseball card world was all about those holograms for Upper Deck. As soon as the "chrome" technology came about, though, the hologram was set aside in the same way that that "Sportflics" 3D "technology" went away after the mid-to-late 1980s.

Even stranger is the fact that it appears that Upper Deck whiffed on its first attempt to register its use of the hologram logos that it used on the back of the cards. You remember those home plates, stars, diamonds, and racing flags? Well, their attorneys and Upper Deck tried to go a bit cheap and register those logos all at once under one trademark application. The application was denied for trying to register "an idea or concept, rather than a single mark." I can only imagine that Upper Deck "asked" its lawyers to file a number of other applications at a reduced rate (read as: file it right this time and we won't sue you to get our wasted money back for your first effort) going forward. 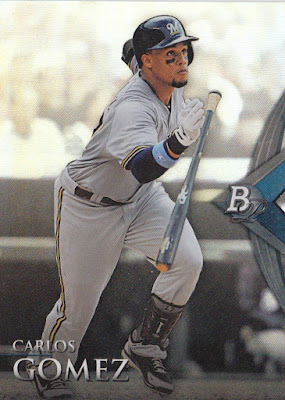 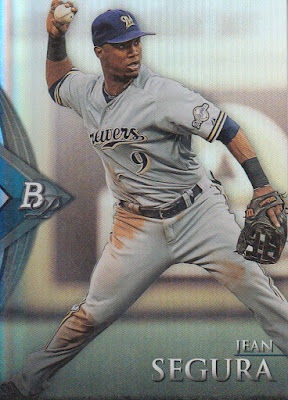 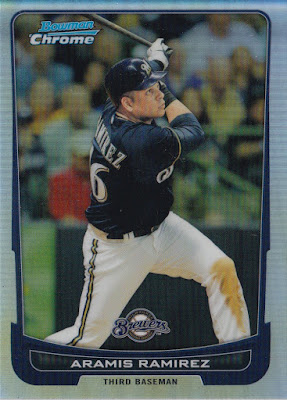 All three of these guys were traded by Milwaukee over the past eight months. The Gomez trade really restocked the farm system. The Ramirez trade brought over Yhonathan Barrios, who is now on the 15-day disabled list thanks to an unspecified shoulder injury.

The Segura trade -- with the Diamondbacks -- was a real head scratcher among people who employ advanced statistical analysis from the Arizona side of the equation. Thankfully, there are still Dave Stewart-types in baseball who think advanced statistical analysis is something people have to "believe in" like Santa Claus and the Easter Bunny. Without folks like old Dave, who will focus on results caused by an overly high BABIP for half a season in 2013 and ignore the reality from 2014 and 2015? 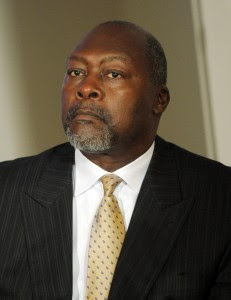 To be clear, I hope Segura does well for Arizona. Just not as well as Orlando Arcia does for Milwaukee. 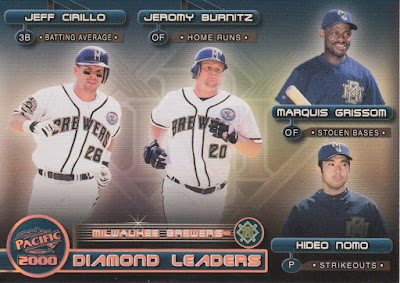 And finally, there was this Pacific 2000 "Diamond Leaders" card of Jeff Cirillo, Jeromy Burnitz, Marquis Grissom, and Hideo Nomo.

Since these guys were the team leaders in 1999, I think of Prince. Of course.


JayP, thanks again for the great cards. Hopefully my rambling did not dissuade you from sending more cards my way!