My wife is a very understanding woman. She let's me have my "card" time pretty much when I want to have it. Sometimes she'll complain, other times she's pleased for her own mental break, and still other times she wonders aloud how much I've spent on postage lately.

In the end, though, she knows that I need my downtime. She started to understand more of what I do by watching the deposition sequences in "Making a Murderer" and realized how taxing it would be to be on either side of a deposition. Those days are the ones that are the most difficult. It's 8 hours of constant attention, constant thought, sometimes constant talking, sometimes constant boredom, and sometimes fear that my deponent will not remember my pleas not to answer questions that lead them to say, "I don't know, but I'd guess that Joe did that."

So, with her newfound understanding of what I do at work, she has been more forgiving about me being on eBay.  I've bought a decent amount of cards there lately.

For instance, I've been working on my 2014 Topps Jonathan Lucroy pinwheel rainbow of cards: 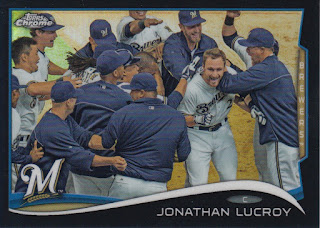 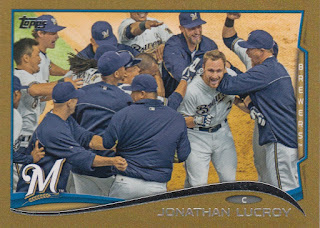 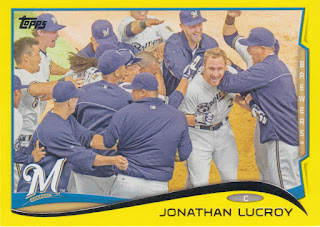 While they all look to be the same size, that Gold is actually a mini, the yellow is a retail parallel, and the black and the blue are both chrome refractors. All but the yellow are serial numbered as well.


That marks a total of 21 different parallels of that card now for me. Everything I am missing has a serial number of 10 or less, so I might just call it complete and let Dolly Parton sing about my Lucroy of Many Colors.

Another recent purchase was a full set of the 2012 Waukesha Police card set, which was sponsored by Waukesha Sportscards, which always seems to have a few more sets laying around the store on eBay to allow the cards to stay cheap. 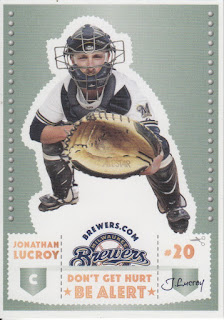 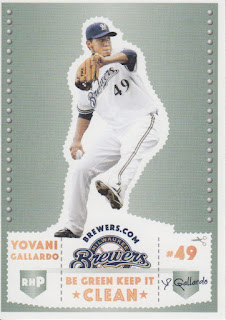 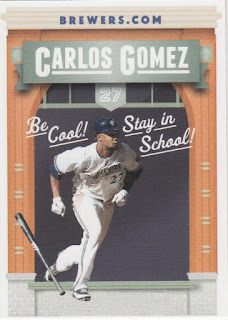 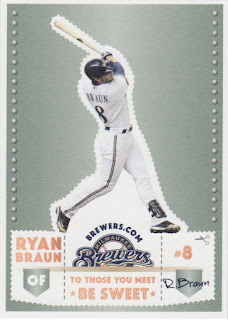 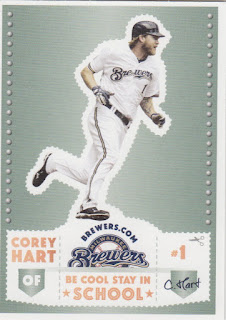 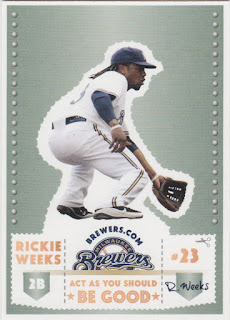 In theory, kids are supposed to cut those ones on the blue backgrounds out and stand them up. I'm pretty sure that isn't happening, but that's why you see a dotted outline on each card and a little scissors on each. Safety cards have gone backwards over the years. In the past, there were multi-paragraph stories on the back. Now, it's grammatically incorrect sentences lacking punctuation and written as if e e cummings were responsible for the design.

Oddly, though, there are a decent number of cards in the set that look like Gomez rather than the rest -- where it appears that the player is emerging from a stage, maybe, or out of a school window or something?

Call the police -- there's a madman around.

It's a true oddball set from a time where few oddballs exist. I'll take it.

I've continued my Lucroy spree -- as if me buying more cards of him either will keep him a Brewer or hasten his way out of town. I'm not sure which it is. 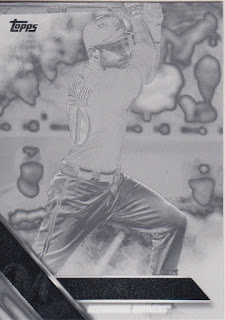 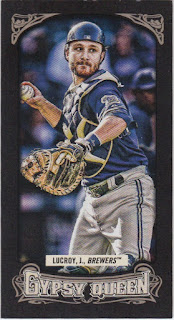 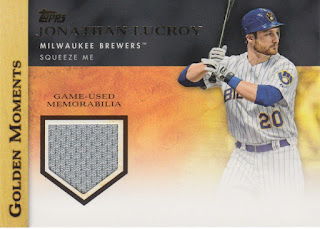 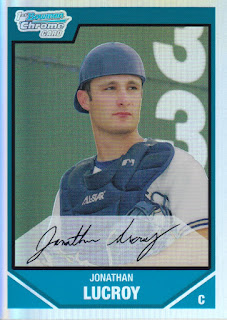 The 2016 Black & White parallel came with a Saltalamacchia B&W parallel for just $0.99 plus shipping. The relic from 2012 was actually a bit pricy and I should have backed off on it, but...I wanted it. Same goes for that 2007 Bowman Chrome Draft Picks & Prospects card that is actually a refractor. Finally, the Gypsy Queen Black mini from 2014 came with a Warren Spahn short-print from that same year that I needed as well for just $1.94 plus a bit much on shipping ($3.50). To be fair, either one of those cards could have been sold for that price.

So, it would have been a bargain at twice the price!


Speaking of oddballs and bargains, I ponied up a little less than $5 to get a new Ryan Braun card. Just as the Lucroy mini plus Spahn short print made sense to buy, so too did this one. 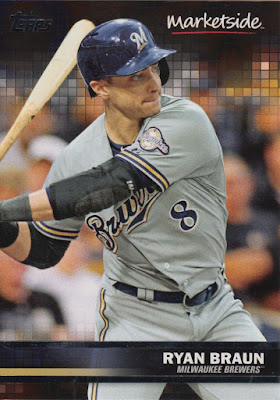 I mean, I could buy a Wal-Mart pizza or breadsticks and hope I'd get the one card in the set that I need, or I could simply pay less than the price of half the pizza and get it for sure. I went with the sure thing. Call me boring ... just like staying home instead of joining over 93,000 people at the UGA G-Day game yesterday.

Maybe I should have gone to see Ludacris, though. Of course, I got to watch it on Periscope and it's on YouTube, so staying home and seeing it was much better.

Finally, we have two new Robin Younts from eBay. 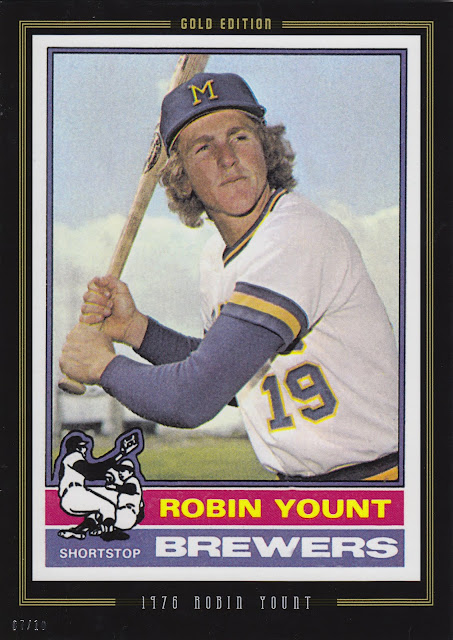 Once again, I probably should not have spent the money on these that I did. The top one is one of those 5x7 money grabs that Topps put out this year called "Anthology." This one, though, is a gold parallel -- and damn, why does there need to be parallels in these types of sets other than to accentuate the money grab? -- so it's serial numbered 7 of 10.

The other one is actually a really cool manu-relic from 2016 Topps -- the Commemorative team logo pin relic. Just like I'm a sucker for Brewer cards, I'm a total sucker for the old Ball-in-Glove MB logo.

The only question is -- how low do I go?