As I mentioned in my post about the cards from Night Owl, a lot of us on Twitter have been engaging in the 30-Day music challenge. It's a list of categories that you're supposed to run through on a fairly daily basis to identify various songs that come to mind. Day 1, for example is "A song you like with a color in the title." Others get more personal, like, "A song that breaks your heart."

Since I threw the idea out at the end of that post, I thought I'd take a first cut at putting together a similar list for baseball cards. I personally am going to use this list as blog fodder when I am lacking in trade posts -- which will come soon, based on my own lack of time lately to put packages together -- and when I'm not feeling up to a full research post for "Meet the Brewers." The Meet the Brewers posts will begin again soon, but it may be a month or so before I start them up again, so I need a little bit of other stuff to post about. 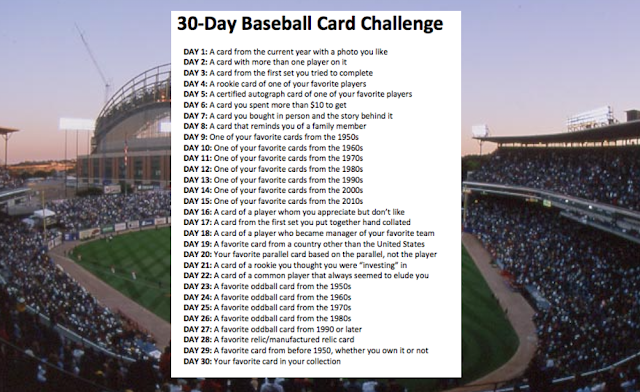 For what it's worth, I gave it a background of a photo found through a Google Image Search of the old Milwaukee County Stadium -- the stadium against which all others are measured in my book.

Feel free to share it on Twitter, use it in your blog posts (with or without attribution -- I don't care), tweak it further to improve it, change categories to fit your sport -- whatever makes you happy. If you do decide to use it on your blog, would you be so kind as to leave a message below, though? I'm thinking that there are, again, a whole host of new blogs that I'm missing out on so any new ones I can add to my list will be appreciated.

In some respects, I hope that this encourages more interaction via the blogs than at least I have had in recent months. Much of that is my own fault -- being too busy does that. But I have seen folks lament the old days of the "blog bat arounds" and thought this might be an idea to that end as well.

Because I have only really seen a very limited number of cards -- the Brewers cards from Series 1 Flagship and from Heritage in particular -- I have a limited number to choose from at this point. As I said on Twitter, I went with the future. 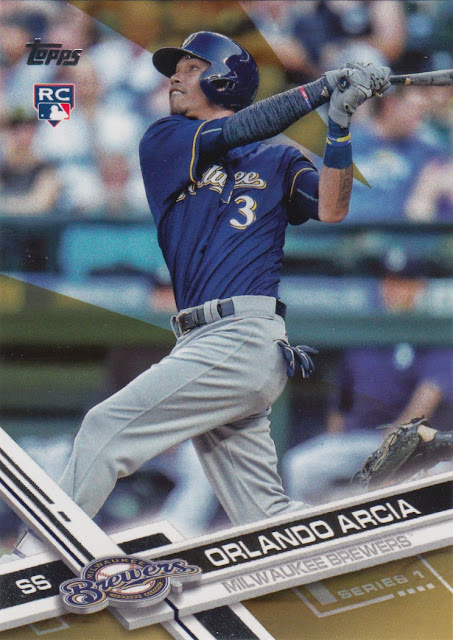 This is the 2017 Topps Gold Orlando Arcia card, serial numbered and all. I'm itching to start another player collection soon, and Arcia is in the mix for that "honor." As he continues to develop this year, we will see if he starts to solidify a position in that mix or if, instead, he needs to start looking over his shoulder for Mauricio Dubon and Isan Diaz.

For what it's worth, the guys I view as possible new player collections for me are:

Erceg, in particular, is a guy who I think could move up quickly through the Brewers system and make an impact in the major leagues sooner than might otherwise be expected. Not that I'm a prospect guru, mind you, but as long as he can avoid trouble and adjust as needed, he just looks the part.

At any rate, I hope y'all will take part at your leisure in the 30-Day baseball challenge. Thanks for stopping by.