Reporting from the Card Show: A Contest?

Based on the resounding lack of readers for yesterday's post, perhaps I was wrong about being missed last week. Work sucks in that it takes us away from the stuff we enjoy doing, but generally we are unable to do things we enjoy doing without working to get money to allow us to do what we enjoy.  It's a vicious cycle.

My answer was Sunday, October 4.  As I mentioned before I left town, I stopped at my local card show for a couple of hours and picked up some random finds. How random? Let's start with Gary Carter random:


I know I'm a logo snob, and I have commented previously about the Diamond Kings set not being a favorite, but the more I see the cards, the more it grows on me.  Quality like this -- and not those crappy cartoon cards that Panini put out in 2012 and 2013 under the guise of being "Triple Play" -- makes me not miss the logos.

Here's an idea as to how to control parallels while still having the hits and the parallels and getting fully licensed cards from people other than Topps.  MLB should issue a license for exactly one set per card manufacturer per year (other than Topps...again, we're not affecting their contract here). That licensed set can include up to 500 base set cards, of which one team may not have more than 17 cards and no fewer than 15 cards.  Any teams that no longer exist can have up to 20 cards in the set, and those cards don't count against the 500 limit.

With me so far?

There can be up to 5 insert sets.  One insert can be autographed, one insert may have relics, and one insert can combine the two. All of these must be serial numbered to no fewer than 25 -- to give some scarcity -- and they cannot have parallels.  The other two insert sets are the more common ones -- 1 in every 2 packs, say -- and can include any assortment of players and teams that the card company wants to include.

Then, collectors get to vote on which of those fully licensed sets sticks around for the next season.  It'll be like All-Star voting.  You get to vote on which base set wins, which insert sets win, which parallels win, and which auto/relic/combo set wins.  The following season, the company that created the most winning sets gets to create two licensed sets -- one higher end, one of the same base-type set -- and we do it all over again as to the voting.

Too complicated? What do y'all think?

Q2 How many card shows happen in your area throughout a year? #CardChat
— Sooz (@yanxchick) October 12, 2015


Again, I'm very lucky. Within a twenty minute drive, there are between 20 and 25 card shows a year for me to attend. The downside is that many of the same vendors attend. The upside is that I have gotten to know a bunch of the vendors so they look out for me and bring Brewers cards when they otherwise might not.

Because, to be fair, there really is no reason that any of these cards should appear at a card show here: 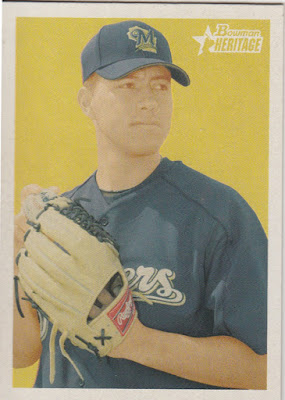 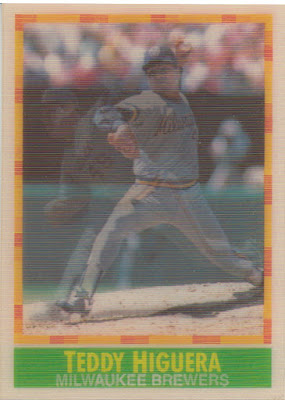 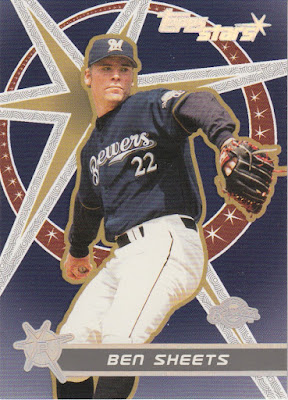 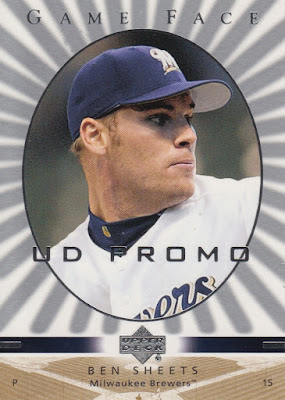 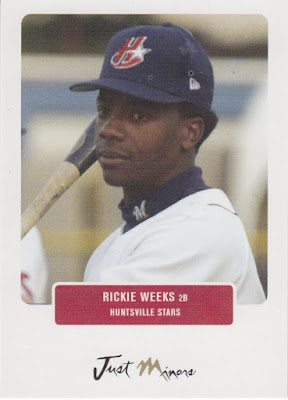 Sure, ten years ago, the Rickie Weeks Huntsville Stars card would have been in some demand, and maybe a 2001 Topps Stars Ben Sheets or UD Game Face Promo of Sheets might have had some pull when Sheets was the next big thing in the early 2000s.  But the Gallardo Bowman Heritage Prospects card? A 1990 Teddy Higuera Sportflics?  I feel like the folks at the show know I will scarf these up.

Now this one is a softball question for me.  I mean, where else could I find these cards for 10 cents without any postage or shipping fees? 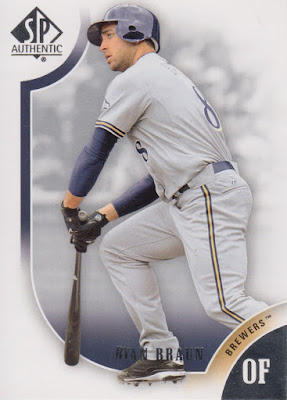 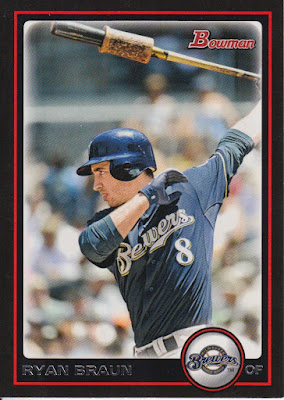 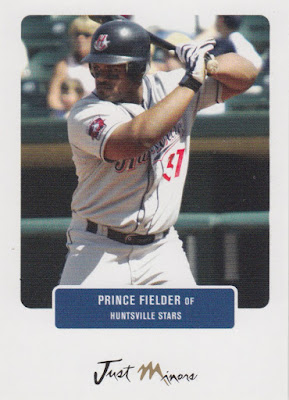 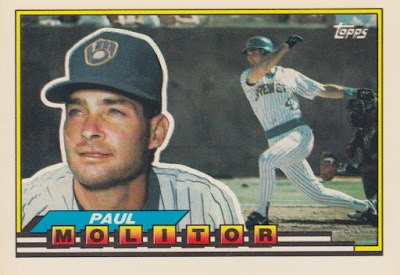 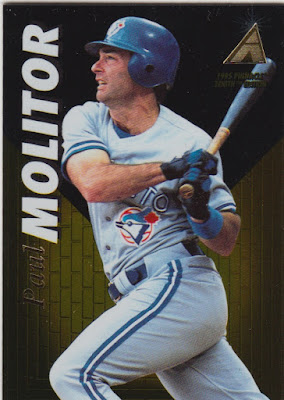 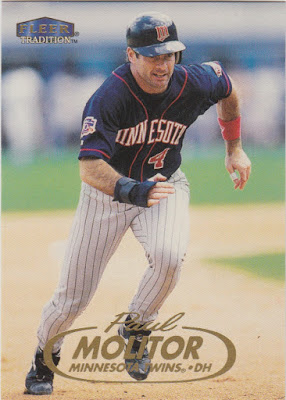 Perhaps when COMC has its Black Friday promotion with free shipping you might be able to find these there, but even then the card will not be a dime.  For instance, I can't find the Molitor 1989 Topps Big on COMC, but the cheapest Brewers available from that set currently are Don August and Juan Castillo, each for $0.45 a card.  The 1995 Molitor Zenith is $0.50 a pop, the 1998 Fleer Tradition is at least $0.75 a piece, and the only copy of the Just Minors Just Prospects Prince Fielder available on COMC as of 10/12 is an encased version of it at $9. I got two copies of it -- one for the team collection, one for the player collection -- for a total of $0.20 including shipping.

Seems like the relative cost and deals that are available at card shows provides a big plus for those of us who do have them available...so long as you have good vendors.

Sooz's next question was a bit more difficult.

Some of the responses to this question were interesting. Ideas such as making dealers stay to the end (not sure how you do that other than hold people hostage, perhaps), having shows at night at a bar or restaurant, themed weekends (80s cards one weekend, 90s cards the next), or getting listings of the dealers attending and having WiFi available all were listed out.

Once again, I'm pretty lucky on many of those counts. Our shows aren't at night, but the gentleman who promotes the show, Frank Moiger, sends out an e-mail prior to the show with the vendors who are attending and what the vendor is planning to bring. These folks go all over and buy cards and are collectors themselves, so they tend to have new stock every show.  And, because the shows are at a hotel with free WiFi, that's not an issue either.

The WiFi is great too because it allows me to check my want lists on this site at the show so I can see that I need cards.  My problem this time was that I didn't have anything up from 2015, so I guessed -- correctly, I'll add -- that I needed these cards: 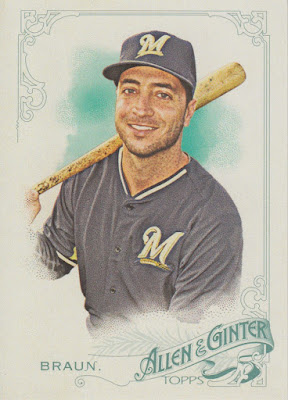 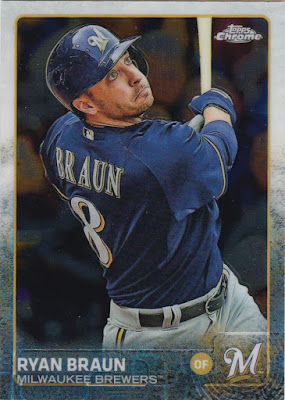 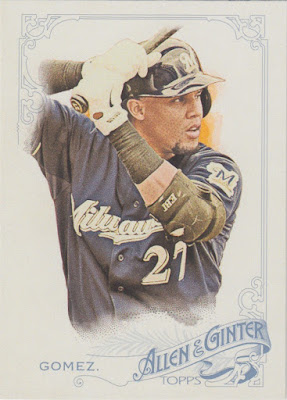 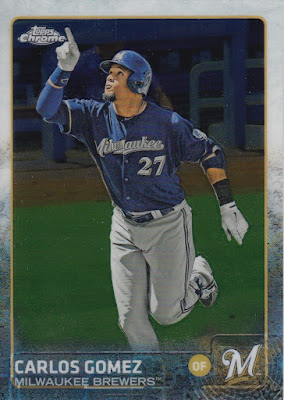 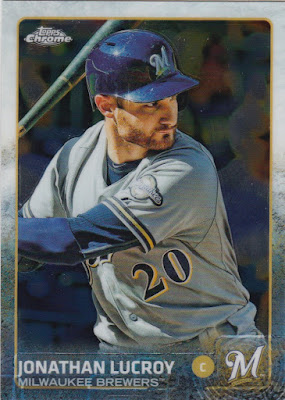 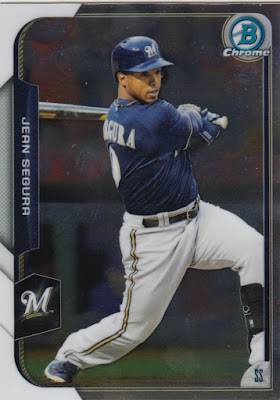 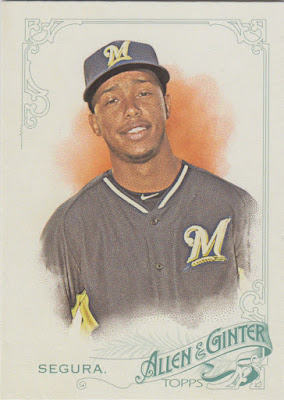 Since these are from this year, I had to pay 15 cents for each of these.  Highway robbery!

Now, I'm out of cards to show you, but I did want to bring up the last question Sooz asked (skipping over the "what killed card shows" and the obvious answer of eBay/the internet):

I know it wasn't from this show, but I think, for the price, that this was my best card show find.  It's from last June, and I paid a shiny quarter for it. 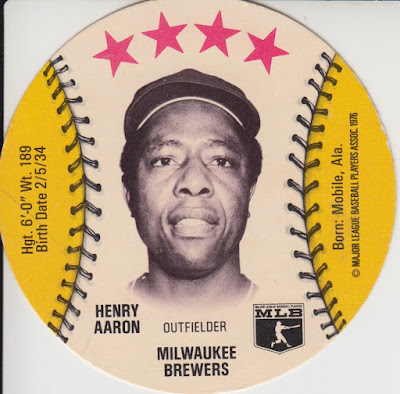 Considering how much I love oddballs, it should come as no surprise that I would pick one of these MSA discs from 1976 (minimum COMC price: $2.94) as my favorite.

How about any of you? Have a favorite card show find to show off?

If you do, how about we make this a little contest? For everyone who puts up a favorite card show find -- whether the show took place last week or in 1983 -- and then puts a link to your blog post in the comments section, you'll be entered into a randomized drawing for a $10 gift certificate for my local card show. In other words, I'll spend $10 buying you cards for your collection at my card show.

The contest will close on October 31 at midnight, and I'll get the winner picked out in time either for a November or a December show (I'm out of town that weekend, so I may not make the November 1 show).