I received a couple of great mailings this week, but I haven't had the chance to scan anything in yet from them or catalog them or do anything like that. So, today, I want to introduce the Brewers first-ever relief pitcher -- John Gelnar.

After Rich Rollins pinch hit for Lew Krausse, Manager Dave Bristol brought right-hander Gelnar in from the bullpen.  The appearance on April 7, 1970, would probably go down as the worst appearance Gelnar ever made in his 111-game major league career.  He was not helped by an error in center by Russ Snyder to start the inning and allow Jim Spencer to reach second, but the Angels followed that up with a double by Roger Repoz, a double by Joe "The Immortal" Azcue (whom we'll meet in 78 Brewers, as he joined the team in late 1972), and a single by Aurelio Rodriguez.

That brought Dave Bristol to the mound, and Gelnar was introduced to Milwaukee fans with a line of 0 innings pitched, 3 hits allowed, 4 runs (3 earned), no walks, and an infinite ERA. It would get better for the soft-tossing righty out of Oklahoma during the rest of 1970, since he remained with the team to right that wrong.

Gelnar was signed out of the University of Oklahoma by the Pittsburgh Pirates in 1963.  The Pirates put him at Double-A Asheville immediately after signing him, and Gelnar looked like the real deal -- 12-5 record, 3.04 ERA in 27 starts with 7.1 K/9 and a 2.0 K/BB ratio.  He pitched fairly well at Asheville in 1964 as well -- though he was hit hard in a limited exposure to Triple-A that year -- and he earned a call-up to the majors in August.

By the time June of 1968 rolled around, when the Columbus Jets visited the Toledo Mud Hens, the Toledo Blade used its game story to talk about about how Gelnar had exhibited great patience but that Gelnar almost certainly would find himself in the majors soon -- whether in Pittsburgh or with an expansion team.  This was after Gelnar had nearly shut out the hometown Mud Hens after the Jets knocked former Red Sox "bullpen monster" Dick Radatz out of the box.

The Blade was right about expansion freeing up a spot for Gelnar in the major leagues. As soon as the 1968 season ended in October, the expansion Kansas City Royals purchased Gelnar's contract from the Pirates. Then, on the eve of the 1969 season, the Royals and Pilots pulled off a trade that would alter Pilots/Brewers history significantly -- and not for the better -- when Marvin Milkes decided he'd rather have Gelnar and outfielder Steve Whitaker instead of Lou Piniella.  In Ball Four, Jim Bouton claimed this trade was a "giveaway" that was "[b]ound to happen" because "Lou wasn't their style."

Piniella was named the American League Rookie of the Year in 1969 in Kansas City before moving to the Yankees in 1974 at the age of 30 and, in the process, hitting .291/.333/.409 over 16 full seasons in the majors. Whitaker spent 1969 with the Pilots before appearing in 16 games in 1970 with the San Francisco Giants at the age of 27. Those 16 games were his last major league appearances.

As for Gelnar, he pitched 53 times for the Brewers in 1970.  In those games, he won 4, lost 3, saved 4, and totaled 92-1/3 innings. Unsurprisingly, he struck out just 4.7 hitters per nine innings.  He came back to Milwaukee the next season and made just two appearances over 1-1/3 innings before new GM Frank Lane sent him along with Jose Herrera to the Detroit Tigers for Brewer #57, Jim Hannan. After those two games for Milwaukee in 1970, Gelnar never pitched in the major leagues again.

Gelnar's best story from Jim Bouton's Ball Four was repeated in a book called Baseball Eccentrics, though this second book got the details all wrong. Let's get these details out of the way, then get to the good part.  According to Baseball Eccentrics, Gelnar was charting hitters against the Baltimore Orioles on the day prior to his start when Manager Joe Schultz called him over to say something to Gelnar.  Baseball Eccentrics claimed that, at the time, the Pilots were a run behind late in the game and says that "Bouton and the rest of the Seattle Pilots strained to listen, assuming that Schultz was seeking some statistical information about the Orioles hitters that would give the Pilots an edge." Schultz says to Gelnar (according to Ball Four): "Up there near the Section 23 sign. Check the rack on that broad!"

Sorry, sometimes the pedant in me comes out.

The Seattle Times in 2006 said that Gelnar got into the oil business after his career ended and is now a rancher and farmer in Hobart, Oklahoma. It looks like Gelnar tried out Twitter for a little while -- mainly interacting with family -- but he hasn't tweeted on it since last September.

I have the two John Gelnar cards shown in this post. I do not have what might be one of the worst oddball photos I've seen in a long time -- Gelnar's 1970 Mike Andersen Postcard: 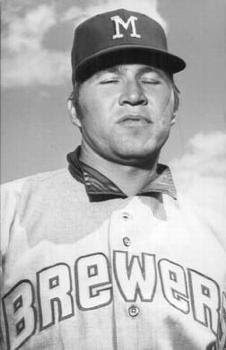 Man, that is brutal.  I also do not have the 1971 Dell Today's Team Stamp or his O-Pee-Chee or Topps card from 1971 either. Those cards are from that difficult-to-find-at-a-reasonable-price sixth series, card number 604.
Posted by Tony L. at 1:21 PM