It's about time that I get back to writing about one of my favorite interests: the history of the Brewers. Today, we get to Brewer #39, Bernie Smith. Bernie debuted with the Brewers by playing in both halves of a July 31 doubleheader in which the Brewers were swept by the New York Yankees.

Calvin Bernard Smith has an incredible story for a man who who only played in 59 games and got 127 plate appearances between 1970 and 1971 as his entire big-league career. Smith was 28 years old -- almost 29 -- when he made his debut in Milwaukee. He got his first hit in the nightcap of the doubleheader: an infield single off Fritz Peterson. How Smith arrived at that point in time, though, is the intriguing part.

He was listed at 5'9" tall and allegedly weighed 164 pounds. In the two long articles about him that I have read, however, Bernie immediately laughed those numbers off and admitted that he might reach 5'7" tall in spikes and played at 152 pounds. Being so slight of stature hampered his opportunities. While he attended Southern University in Baton Rouge -- a school which 30 years later produced Brewers first round pick Rickie Weeks -- Bernie Smith did not play baseball at Southern. He was too busy trying to get signed to play pro baseball.

His efforts to get signed led him to simply show up in Columbus, Georgia, in 1962 in the spring at Mets minor-league training camp. By "simply show up," I don't mean that Mr. Smith hopped in his car and drove from his hometown of Lutcher, Louisiana, to Columbus. Oh no. Despite being a black man in the Jim Crow South travelling over 400 miles on the hopes of getting a shot to play minor league baseball and despite that timeframe being in the wake of the Freedom Rider movement, Bernie Smith hitchhiked the 400+ mile trip to ask for a tryout. 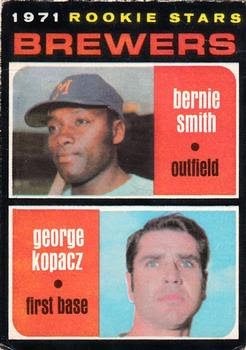 He played well enough to get signed to play at Class D Auburn in the New York-Penn League. Not long after, he became a regular outfielder. As the year progressed, Bernie proved to be the best player on the team and was named the Auburn Mets MVP for the year.

The Baby Mets ended up winning the playoffs of the NY-Penn League that year. Despite his starring role on the team, however, Bernie was not going to be able to afford coming from Lutcher all the way to upstate New York for the annual Mets baseball dinner. As the February 23, 1963, The Sporting News article noted, Bernie was the lowest paid player on that team, so not being able to afford getting to the dinner is perhaps unsurprising. But he made the dinner anyway -- because the guards and prisoners at the state penitentiary in Auburn chipped in to thank him for the excitement of the previous season to pay for Smith to come to Auburn by bus. The article noted that they raised enough money so that "Bernie could eat steaks during the trip."

Smith's break came when the Mets traded him to the Seattle Pilots for minor leaguer Gary Upton. His debut season of 1970 was dreamlike -- first major league hit, of course, and his first major league homer came in the top of the tenth inning on August 25, 1970 to win a game for the Brewers. His break was short-lived, though, as Smith got passed just as quickly in Milwaukee as he did in New York -- especially after the change in general managers after the 1970 season led to the acquisition of journeyman Andy Kosco.

But that is not where the story ends in baseball for Bernie Smith. He had one last hurrah: he became the first black manager in the Midwest League, named as the manager of the Brewers affiliate Danville Warriors just a few days before Deacon Jones was named manager of the White Sox affiliate Appleton Foxes -- both for the 1973 season. And Bernie was much more successful than Jones. Jones's team suffered through a 15-game losing streak to start the season and finished the year 44-76. On the other hand, Danville finished 66-57 and won the Southern Division.

Yet, that was Bernie's end in baseball. It appears that he went back to Lutcher and opened a store there. That led to some legal and financial issues in the 1980s. To be clear, one of his legal issues sounds fishy in how police targeted his store in 1980, but it appeared that Bernie got in trouble for receiving and trying to sell stolen typewriters in his store. The warrant the police got was bogus, in my non-criminal-lawyer opinion. He received an excessive five-year sentence for the crime, and it happened shortly after his wife Creola had died suddenly after four sons had been born to them. His conviction was just ridiculous, in my book -- I feel assured that a white man in a similar circumstance (especially in the South in the early 1980s, but probably anywhere) would have gotten a lighter sentence.

At any rate, I know Bernie is still alive in Louisiana. I have been meaning to get in touch with him, and my failing to do so is what led me to hold off on writing this. But, now that I have written this up, there are so many questions.

Such as: what was it like to hitchhike to Georgia across the backroads of Mississippi and Alabama?

To close, you see the three baseball cards of Bernie Smith that appear in the Trading Card Database. I do not own the 1971 O-Pee-Chee of Bernie with George Kopacz, but I do own the Topps version and the Miller card.
Posted by Tony L. at 7:06 PM