Just as Lew Krausse was the first man wearing a Milwaukee Brewers uniform to throw a real pitch in the major leagues, the second man to handle the ball was Jerry McNertney. 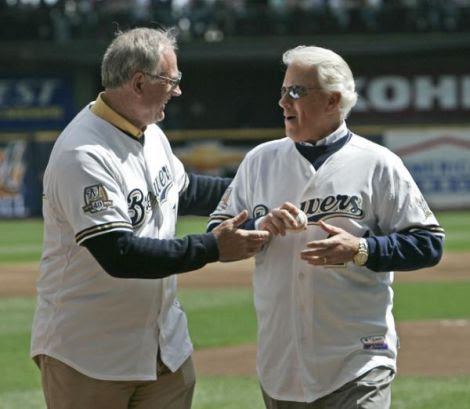 McNertney caught the first pitch of the game and, as this story from the Milwaukee Journal from April 8, 1970, notes, time was called to replace the ball and ship that ball to Cooperstown.  The game took place one week after Federal Bankruptcy Referee Sidney C. Volinn gave approval for the Seattle Pilots to be sold and moved to Milwaukee -- over the objections of the State of Washington and the City of Seattle (who sued Major League Baseball for $82 million).

Not that McNertney minded all that much.  He said so himself to the UPI: "I'm glad they made a decision. I don't have the problem of the married guys. But I'm going to miss Seattle. I really liked it and looked forward to more years there.  They do have a better ball park in Milwaukee, which gives the pitchers an advantage. I'm relieved, yet I'm sorry. Seattle deserves better."

Perhaps McNertney deserved better out of his career as well. It took him until the age of 27 to reach the big leagues with the Chicago White Sox, the team he signed with initially straight out of Iowa State University in 1958.  The Sox didn't think that much of the young 1B/OF, or, on the other hand, they were doing so well in the big leagues with guys like Roy Sievers, Minnie Minoso, Jim Landis, and Al Smith such that they didn't need another corner guy.

Only when he converted to catching in the Sally League in 1961 in Charleston did McNertney become a potentially viable major leaguer.  McNertney's minor league stats show a guy who had a good batting eye but very little pop.  That's the way his big league career turned out as well.  He was an okay player who was left unprotected in the expansion draft in 1968 at the age of 32 years old. The Pilots selected him and made him their everyday catcher. 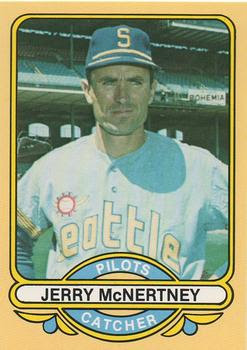 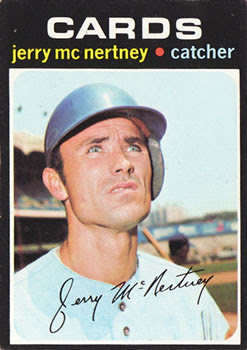 McNertney's role in St. Louis was well established. His role in 1971 was to play when Ted Simmons needed a day off.  Those "days off" came when Simmons had to serve his military reserve duty. This earned McNertney the nickname "Weekend Warrior."

After his release, he returned to Ames and finished up his bachelor's degree from Iowa State. His career in baseball continued after that in the Yankees farm system before working as the bullpen coach for both the Yankees and Red Sox.

I have just one McNertney card in my possession, and it is a glorious oddball: 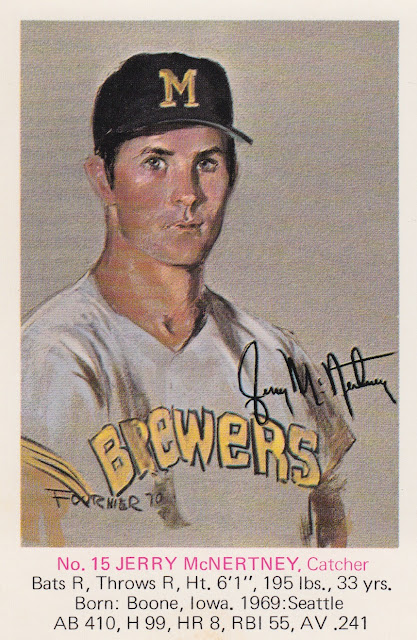 This is actually a detail (to use an art term) from a sheet of 6 that McDonald's in Wisconsin gave away in 1970. There were 6 total sheets, and the set is reasonably available on eBay and through other hobby sources.
Posted by Tony L. at 8:31 PM