I decided to write a post tonight comprised of recent PWEs that I've received in the mail lately accompanied by songs that have been randomly going around in my head.

First, a word of explanation as to how some of these songs got in my head. My wife and I have a game that we play on Fridays and Saturdays. I put together playlists of songs for her to guess the artist name and song title. We mute the TV and usually put baseball on (or some other sport if it's not baseball season) and have a couple of drinks and unwind and catch up on the week.

It almost always goes the way that she has to guess the songs and titles. I don't want to sound too cocky here, but she gets really frustrated with me because I get way too many songs correct way too quickly for her tastes. Then she plays music to "challenge" me -- read as literally stuff I have never heard before in my life -- and it stops being fun because she doesn't like the music she's playing either. I've gotten to the point where I'll act like I can't remember a song or artist just to listen to the song!

In any event, the songs to accompany the cards are ones that came up in some of the playlists that I put together for my wife and which now I can't get out of my head.

Let's start with the PWE that my good pal Kenny a/k/a Zippy Zappy sent my way -- a couple of cards that missed his initial package of Brewers and Bucks and Packers: 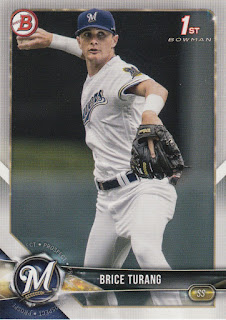 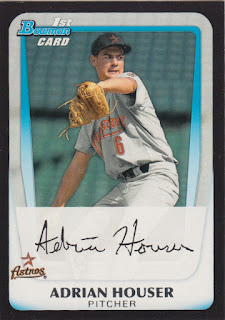 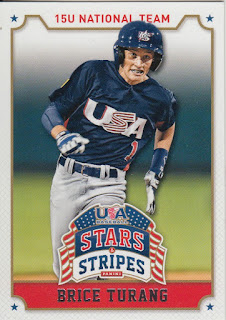 Kenny sent me a two Brice Turang cards -- one of him as a Brewer and one as a 15U USA team member. Turang, of course, was the Brewers first round draft pick in 2018 out of Santiago High School in Corona, CA. The Brewers paid him the money not to go to LSU to play baseball.

MLB.com pointed out a couple of interesting facts about Turang when this selection occurred last year. First, Brice's dad Brian was selected by the Milwaukee Brewers in the 20th round of the 1987 draft out of Long Beach City College. He didn't sign, and then ended up and total afterthought selection of the Mariners in 1989 -- the 51st round from the University of Hartford. Despite that less than stellar draft record, the elder Turang worked his way up to the majors and got 283 plate appearances over two years in 1993 and 1994.

The second interesting fact about Brice Turang is that he is the first shortstop that the Brewers have selected in the first round of the draft since 1987, when the team led off the draft with Billy Spiers. Before that, the Brewers had a bunch of notable shortstop selections, including Gorman Thomas (1969 by the Pilots), Robin Yount (1973), Paul Molitor (1977), Gary Sheffield (1986), and Spiers. But then it took 31 years for the next one.

He also sent me an Adrian Houser card with Houser on the Astros. Since I got this card, Houser has been godawful, so I may just start the card on fire as a sacrifice to the baseball gods to get Houser back on track.

One of my wife's favorite songs to chop vegetables by in the kitchen is "Starships" by Nicki Minaj. Its chorus is incredibly catchy and gets stuck in my head with regularity...and having found it on YouTube and let it play for a bit, I'll probably wake up with it in my head too.

In a related idea, does anyone listen to a lot of podcasts? I got turned on to a podcast from the Vox Network called "Switched on Pop." It features a musicologist (Nate Sloan) and a songwriter (Charlie Harding) who try to figure out what makes songs or artists hits. The episodes stand alone well, and the first one I listened to featured the lead singer from indie-pop band Joywave -- which featured in Kenny's "What I'm Listening To" post -- wondering why so many alternative hits seem to have very similar sounding choruses. I won't spoil the ending for you if you do listen, but I will say that this was the first time in 30 years I'd heard the term pentatonic scale. It's quite an enjoyable podcast if you enjoy thinking about what you're hearing as music and what makes it good. 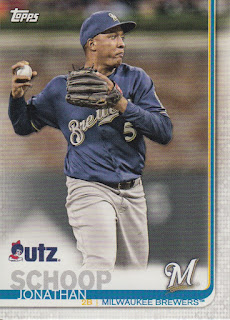 The next PWE I received came from the potato chip largesse being enjoyed by Mark Hoyle in Massachusetts, as he scoops up all the Utz chips in sight and keeps the cards he needs while sending away ones he does not. Thanks to Mark, I now have two Utz cards -- Jonathan Schoop and Lorenzo Cain. I'm still looking for Jesus Aguilar and Christian Yelich, so if anyone sees these floating around, I'm up for them.


My wife loves country music. Her favorite artists are Carrie Underwood, Luke Bryan, and Sugarland, but she likes a lot of country music generally. One guy whose music kept being recommended to be played was Luke Combs. His song, "When It Rains, It Pours" is one that gets stuck in my head all the time -- again for its chorus.

The things I like about Combs is that, well, he doesn't look like a male model, he doesn't try to be a country rapper, and he sings well without much help from the autotune. He just seems like a good old boy who is relatable. Others agree with me; the Associated Press, of all outlets, had a story last year that was headlined, "Country singer Luke Combs' unassuming appeal makes him a hit." The guy built up a fan base not because he's got good looks, but instead he just played over 200 shows in 2016 alone all over the Southeast.

Maybe all that is why I like him, I guess. 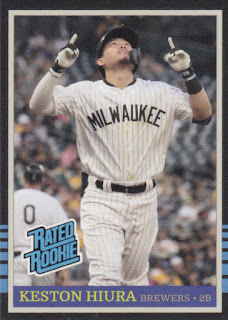 The final PWE I got during the last week of June came from Matt Prigge. Matt puts together custom cards for the Brewers season to fill in gaps for Topps Now or, more to the point, to put cards together that he likes. He had made up four of these Keston Hiura "Rated Rookie" cards and gave three away through a Twitter giveaway. I was lucky enough to catch the last one of them.

"Yeah!" by Usher f/Lil Jon and Ludacris is pretty old school at this point. Having not been a big dance club guy or pop music guy at all in the mid-2000s, I missed this one when it came out in 2004. It was pretty ubiquitous -- it was, after all, the top ranked song of the year in 2004 and it was the second overall song for the entire decade of the 2000s according to Billboard -- so you can tell I was totally in my own little world in 2004...probably just playing FIFA 05 over and over.

Anyway, this song gets stuck in my head pretty regularly in the day after my wife and I play our game. It's not a bad thing with this one though -- it's upbeat and a pretty fun song.

Thanks go out to Kenny, Mark, and Matt -- I greatly appreciate y'all being so kind as to send me cards.
Posted by Tony L. at 8:13 PM