Supertramp was a staple of 1980s classic rock stations -- at least the ones that I heard in Milwaukee in the 1980s. I don't know if they still get radio play any more or not. In fairness, I'd pretty much forgotten this song existed, but once the first notes started playing, my memory was quickly jogged.

Of course, in typical 1970s classic rock fashion, this song lasts about 2 minutes longer than it really needs to last. 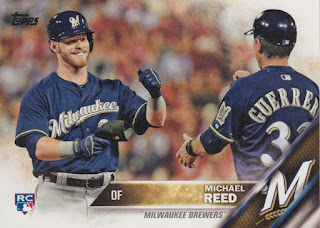 Similarly, I'd pretty much forgotten that Michael Reed played with the Brewers before getting this card from Kenny. Of course, that forgetting is much less forgivable than forgetting about a 40-year-old classic rock song, since Reed played for Milwaukee as recently as 2016 and was still in the Brewers system through 2017.

I've heard all kinds of buzz for of Montreal for a few years now. I'm very disappointed in myself for not having done any looking into them before this.

of Montreal originated in the best city in the whole wide world -- Athens, Georgia, of course. The band is fronted by Kevin Barnes, who added Derek Almstead and Bryan Poole upon his arrival in Athens in 1996. Almstead and Poole both were/are members of noted Athens band Elf Power, whom I know I saw at least once in the mid-1990s during law school.

For a while, of Montreal was on the legendary Athens record label called Kindercore alongside bands like Japancakes, Kitty Craft, and The Mendoza Line. I feel like I can recall that the label's formation was pretty big news in town back then. But, I might be projecting memories of being cooler than I actually was when I start having memories like that. 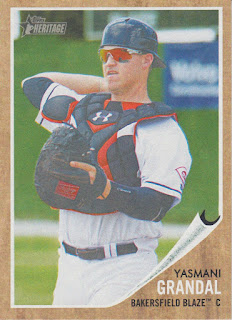 On the other hand, Yasmani Grandal -- even though he is shown playing for the Bakersfield Blaze -- is far cooler than my memories. Here's hoping that he'll stick around in Milwaukee for one or two more seasons.


Soccer Mommy is Sophie Allison, a Nashville native by way of being born in Switzerland and after attending two years of college at NYU and dropping out. Wikipedia says that she cites Mitski, Taylor Swift, and Avril Lavigne as influences, but my ear on this song picks up an influence that may have come from touring with the man -- Stephen Malkmus and Pavement.

It's a good song. It's one of those songs that will get stuck in my head if I listen a few more times -- lots of hooks and very catchy. 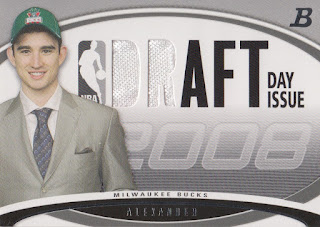 Curry is a Miami rapper whom I've never heard of before. Curry just released his new album, also called ZUU, on May 31, 2019. This song is short -- barely 2 minutes long. I like it, though. There's not a ton here lyrically, but the beats are good.

Plus, I give the guy props for wearing a throwback Marlins jersey. 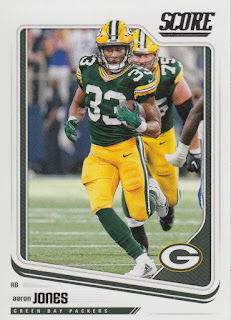 Jones emerged last year as the best running back the Packers had on the roster. After the Eddie Lacy pick went from golden to Golden Corral with Lacy successfully eating his way out of the NFL, the Packers went from converted WR (Ty Montgomery) to 4th round pick Jamaal Williams to 5th round pick Jones over the past three years.

It might also help if Aaron Rodgers would stop checking out of running plays because he thinks he's the best offensive coordinator in the stadium.

Kenny says that this song sounds like She Wants Revenge or Joy Division to him. Yup, definitely that 80s New Wave/00s Renew Wave sound going on. Twin Shadow a/k/a George Lewis Jr. sounds to me is even more influenced vocally by Morrissey. Again, that fits into that genre quite well, since New Order and The Smiths were contemporaries in Manchester in the 1980s.

It's not the sound I was expecting, to be fair, but I'm a fan. Definitely. 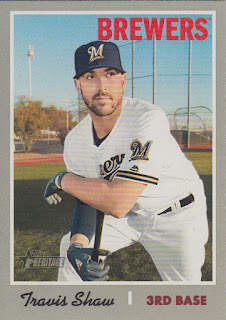 I am surprised at how nostalgic I feel toward the Heritage set this year, what with it being 1970 and all. As a kid, I used to love the 1970 set for having the Seattle Pilots in it even though the team became the Milwaukee Brewers that season. I don't know why that is -- perhaps it was a reflection of my enjoyment of Ball Four or perhaps it was because the 1970s were the decade I was born and felt much closer in time to me than anything from the 1960s.

This is why this card is such a good analog for the Twin Shadow song. I wasn't expecting to like this year's Heritage as much as I have, but I'm a fan. 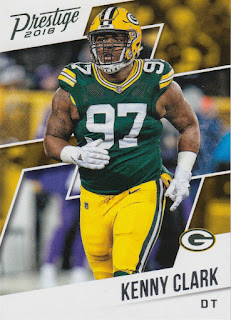 Kenny Clark is going into his fourth season as a defensive tackle for the Packers. Clark is a good player, no question -- getting 6 sacks in 13 games from defensive tackle is no mean feat -- but the next time Kenny Clark starts 16 games will be the first time. Yes, he played 16 games in 2016, but he only started 2 and only racked up 21 tackles -- he was a special teamer for much of the year.

I have not been impressed with the Packers most recent drafts. I feel like they don't take enough SEC players. Sure, I'm biased toward the SEC in that regard, but I thought taking the best players in the draft was the idea. Maybe that's just me, though.

I have heard of this band before thanks to their collaboration with Big Data on the song called "Dangerous" from about five or six years ago. This song is only okay to me. It just doesn't grab me. Maybe it's the mood I'm in today or what have you, but it just isn't something I want to hear again. 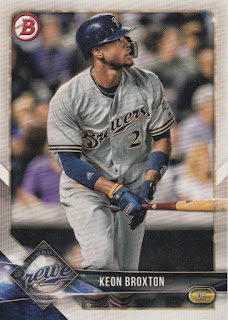 Similarly, while Keon Broxton is an excellent defensive outfield to my eyes, advanced metrics for him are all over the place. Add in his terrible inability to make contact on anything approaching a regular basis, and you can see why he's on his third team this year already. Granted, the Brewers got him for basically nothing from the Pirates a few years ago, so we are already ahead on that equation.

Well, folks, that's it for the Kenny Appreciation post for 2019.

Now that we know what Kenny is listening to these days, I would be interested to hear what everyone else has filling their ears. Are you a country music fan? Do you dig disco? Is New Wave your jam? Tell me what you're listening to!