Meet the Brewers #36: Dave May

In this series of biographies, I've talked a number of times about how Marvin Milkes seemingly started making moves simply for the sake of making them. Just like the cliched "blind squirrel," it seemed inevitable that Milkes would make a decent move eventually. Perhaps that move came on June 15, while the team was in Baltimore, when, at the trade deadline, Milkes sent minor league pitchers Dick Baney and Buzz Stephen (both of whom had pitched in the majors before) to the Orioles in exchange for Brewer #36, Dave May. The Brewers also optioned outfielder Hank Allen to Baltimore's Triple-A Rochester team on some sort of loan deal.

David LaFrance May was born in New Castle, Delaware, on December 23, 1943. His parents had nine children in total, and Dave was the fourth. May signed two contracts to play major league baseball -- one with San Francisco and one with Philadelphia. He became a Giant because the Giants were the first to get their contract to MLB. He did not stay in the Giants system for long because the Orioles snapped him up in the old "first-year draft," which allowed teams to draft minor leaguers away from other teams after just one season -- a 249 plate appearance season in the Appalachian League where he hit .379/.457/.561.

May moved up in the Orioles system fairly quickly thanks to his hitting ability, and he made his major league debut in 1967 at the age of 23. The problem for May was that he was with a team that had the outfield covered quite well already with 23-year-olds Curt Blefary and Paul Blair in left and center and future Hall of Famer Frank Robinson in right. As a result, in 1967 and 1968, May was on the Rochester/Baltimore shuttle, splitting time both years between Triple-A and the majors.

May's offense suffered, though, as an Oriole. He was not getting to start many games in the field and was used mainly as a pinch-hitter. As May said in The Sporting News when talking about his trade to Milwaukee, "It was tough playing for the Orioles because when you weren't in there every day, it was hard to get into a groove." Indeed, in the first two-and-a-half months of 1970 before his trade, May had started only two games of his 25 appearances.

Freed from the Orioles at the age of 26, May was inserted immediately into the Brewers' starting lineup in centerfield. In Milwaukee, May was at home in many respects. He was an All-Star in 1973, which was his best season by far -- he led the American League in total bases and Win Probability Added. Part of that season left its imprint on the Brewers team record book as he hit safely in 24 consecutive games. That streak stayed on the books as the Brewers best until Paul Molitor's 39-game hitting streak in 1987.

May struggled in 1974. He had the flu in spring training and may not have been right the whole year. It didn't help that Del Crandall decided to move May to right field, ostensibly to help May out after losing weight thanks to the flu. But he never broke out of the season-long funk. As a result, the team decided to trade him away, and May became the answer to a trivia question: Who was the player that the Atlanta Braves received when they traded Hank Aaron to the Milwaukee Brewers?

May later was traded two years later by the Braves to the Texas Rangers. The Braves sent May, Adrian Devine, Ken Henderson, Roger Moret, Carl Morton, and $250,000 to the Rangers for 25-year-old Jeff Burroughs. Dave spent one year and a month in Texas before he came back to the Brewers in May of 1978. May was nothing more than a bench player behind Larry Hisle, Ben Oglivie, Sixto Lezcano, Jim Wohlford, and Dick Davis -- yes, the team carried six outfielders then -- and ended up having his contract sold to the Pirates in September of that year.

By that point, though, May had left his mark on the team record book for the first decade of its existence. Just look at this "team top 10" list from the 1980 Media Guide: 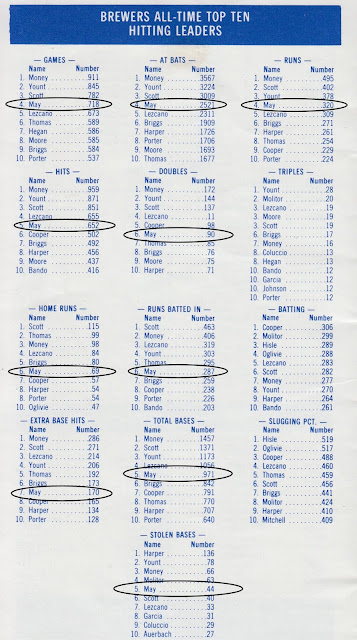 May was 4th in games, 4th in at bats, 4th in runs, 5th in hits, 6th in doubles, 6th in homers, 6th in RBI, 7th in extra base hits, 5th in total bases, and 5th in stolen bases. Yet, in the popularity contest that was the selection process for the 2000 Milwaukee Journal Sentinel Brewers All Decades Team for the 1970s, May was overlooked in favor of Larry Hisle, Sixto Lezcano, Gorman Thomas, Hank Aaron, and Tommy Harper. Of those, Aaron was more of a sentimental choice than one actually based on production for the team, and Hisle probably made the team solely due to his being the first big-name free agent to sign with Milwaukee. May deserved better.
Dave passed away in October of 2012 at the age of 68. He suffered from diabetes for the last decade of his life after he moved back home to Delaware. May's son Derrick also played in the major leagues in the 1990s, spending 32 games with the club in 1995.

Just before Father's Day in 2014, Derrick and his older brother David Jr. talked with each other in the form of a wonderful blog post about growing up with dad being a major leaguer on a website called Instream Sports. Derrick and David Jr. were a little more than a year apart in age, so they were partners in crime often. They played catch with the ball that Dave had gotten signed by the entire 1973 AL All-Star Team -- scuffing it up and getting grass stains on it.

Derrick laughed about riding his bike to the White Hen Pantry and buying Bazooka and Topps baseball cards before going to the games with their dad in Milwaukee. Derrick also recalled one of their early neighbors in an apartment complex in Milwaukee where a lot of pro athletes lived. Their neighbor Lew was a little younger than Dave was, but Dave and Lew became fast friends. Then one day, the boys were told that Lew was no longer Lew -- that he had changed his name to Kareem Abdul-Jabbar.