By now, you have probably seen the Holiday rip cards from Gavin over at Baseball Card Breakdown. 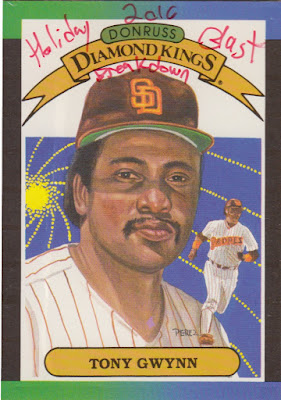 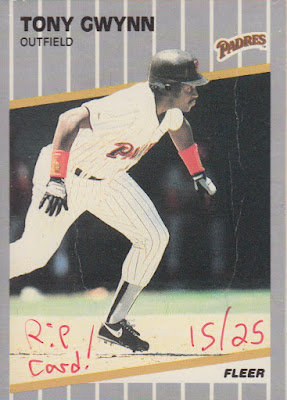 It's the first time since I got back into collecting a few years ago that I was legitimately happy to see a 1989 Fleer card show up. Of course, like nearly everyone, I did the right thing when I got this card. I had to Rip It Up.

While Little Richard didn't write the song, his version was released first. So, I'm giving him credit for that -- meaning everyone after that was a cover. A quick YouTube search shows, well, it's absolutely crazy how many covers there are of this song. It's so crazy that I'm going to treat you to a few of them.

But I'm going to make you wait on what is inside until the end.

Bill Haley released his version shortly after Little Richard did, so it's a close question as to whether this counts as a cover.

To start this off, I am going to highlight the protection that Gavin sent for these cards. He always sends interesting things, and this one was no different: 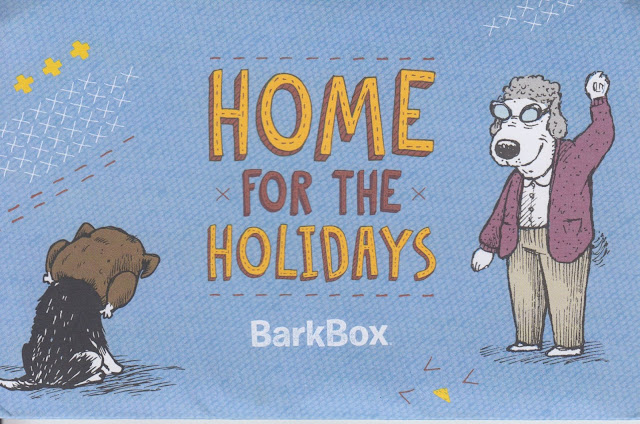 It's been over two years now since I had a dog around. With the two cats we have getting along famously and fabulously, we just don't want to introduce a third party into the situation to throw all that off. But I miss my Cinnie girl. 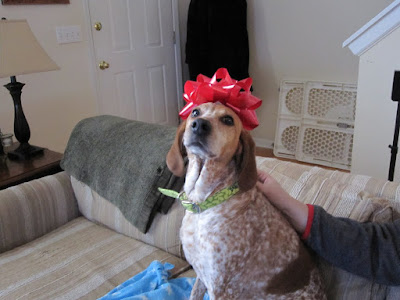 We subscribed to the BarkBox for a few years for her. She loved some of the treats, turned up her nose at other treats, and generally was a good sport about the whole deal. Even if that meant having a Christmas bow on her head.

Okay, let's get back to happier things -- baseball cards, of course.


The Beatles covered this song as part of a medley with "Shake, Rattle and Roll" and "Blue Suede Shoes," a track that was released on their Anthology 3 album. This version is Sir Paul covering the song live in concert. 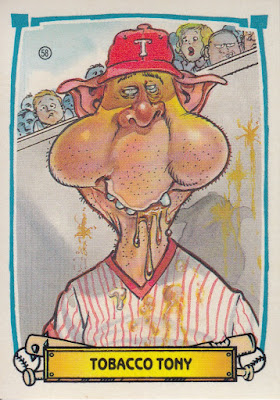 Yeah, this card is pretty interesting. Is there a "Groveling Gavin" version of it somewhere? Perhaps this one is it: 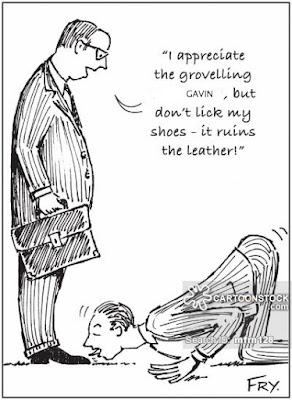 I tried chewing tobacco when I was about 7 or 8 years old -- maybe younger. I think that is the perfect age to try it because you have no idea what to do and you think it's like gum or something and swallow it and become violently ill. And it takes like crap at that age too.

Or maybe that's just me.

Perhaps this song was one of those songs that artists in the 1950s just had to play. You know -- like how every cover band has to play "Twist and Shout"? Because Buddy Holly isn't the only singer from this era to cover it. There will be more. 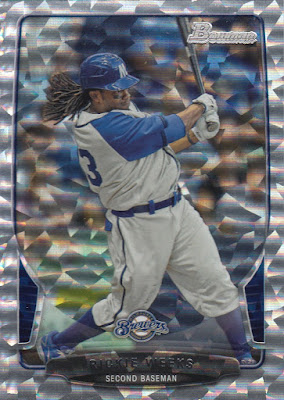 Hey, I have a great analogy now! Every band and artist in the 1950s had to play "Rip It Up" just like Topps/Bowman must have at least 10 different parallels for every one of its sets! That's it!

Don't get me wrong here -- as a player collector, I do enjoy getting these parallels for those collections. But as the numbers of parallels stack up in each set, I start thinking, "Maybe I shouldn't try to put together full sets for my Brewers collection of these."

Then I laugh, have a drink, and forget I ever said that to myself. I'm easily amused, especially when I'm in a pure Faulknerian stream-of-consciousness mode.

See, I told you there were more from that era who played it. I mean, Elvis never met a song he didn't try to take and make his own. Or, rather, Elvis never wrote any of his own songs -- even the fawning "Elvis History Blog" says that he was not a singer-songwriter. So, it should come as no surprise that he or Colonel Tom Parker would hear a song with a good beat and say, "Elvis, you gotta sing this song." And he would. 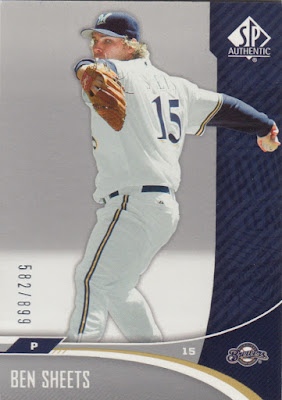 Apropos of a southerner of whom a lot was asked, here's Ben Sheets. A serial numbered to 899 Ben Sheets from 2006 SP Authentic at that. That's pretty good in my book.


Considering the band's sensibilities -- and Brian Setzer's later dabbling in Big Band/Swing music when it got popular again in the 1990s -- it should hardly be surprising that the Stray Cats would cover this song. I don't know when or where this cover came from -- I'd guess the early 1980s somewhere. But the Cats do shred on it. 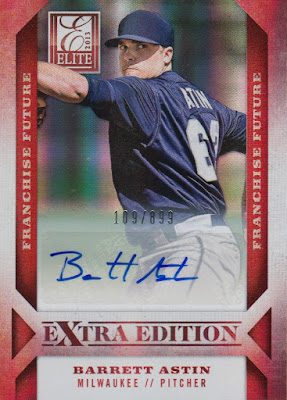 Astin was the Brewers third round pick in 2013 out of the University of Arkansas (Woo Pig Sooie and all that). The Brewers sent Astin along with Kevin Shackelford to the Cincinnati Reds in late 2014 in exchange for the large human being that is Jonathan Broxton. Broxton chipped in 47 innings at a 5.55 ERA clip (though with a FIP of 3.47) before the Brewers sent him to St. Louis in exchange for Malik Collymore (an Ontario native who "hit" .167/.227/.208 in 208 plate appearances in the Florida State League in 2016 at the age of 21).

Astin and especially Shackelford have a chance to make the Reds this year, what with the Reds still being in flux and all. Astin will start in Triple-A this season, and Shackelford pitched creditably in Louisville in 2016 out of the bullpen.


If the Chipmunks did a song, you know it was probably overplayed. Funny thing, though -- at this point in my life and despite growing up with The Chipmunks being on TV regularly, I think the only song I really remember by them is The Christmas Song. 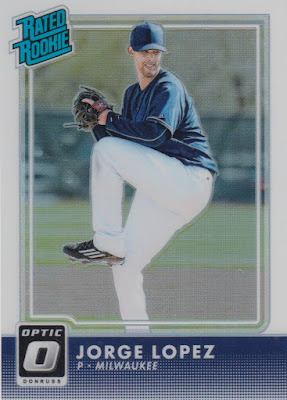 Gavin was responsible for putting the first Donruss Optic card in my hands this year. At least I think he was. I have probably about 2500 cards stacked up on my desk now waiting to get sorted out and cataloged thanks to the crazy generosity from the blogosphere this year, so I may have gotten other Optic cards from other places first but just haven't featured them yet.

I look at this card and think, "Damn it MLB, give Panini rights to use your logos just on the Donruss sets. Limit their parallels. Limit their inserts. Give them a trial run, and see if they do a decent job and not screw it up -- just please give us a little bit of competition for Topps."

Then I remember that MLB really doesn't care about collectors except for getting their licensing fee blood out of Topps. Oh yeah. Forgot that.

Wait. This guy is just a French-Canadian Elvis impersonator. No, really. The guy nails Elvis's voice on some French-Canadian morning show at this link. I'm waiting for the brunette with the really straight hair and bangs to start screaming like it's the Ed Sullivan Show.

But really, I can't end with this guy. Him covering this song is like a double cover, since his whole life is covering Elvis.


This cover was done as a part of Los Lobos providing the soundtrack for the movie La Bamba in 1987. Lou Diamond Phillips "sings" the song in the movie, but the Los Lobos version did not come out until their career retrospective El Cancionero Mas y Mas in 2000 was released. 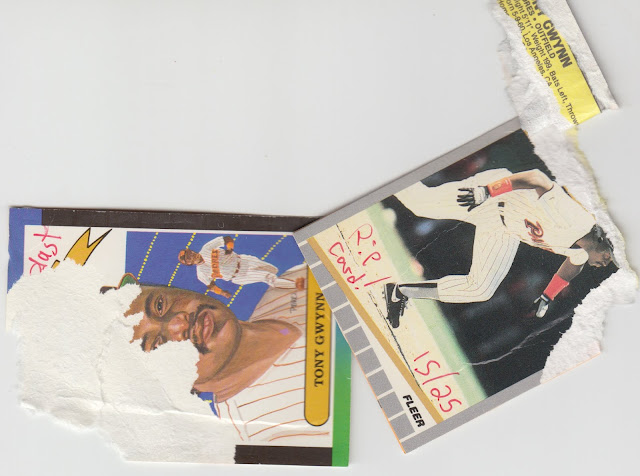 Here's the carnage after the ripping of the rip card took place. Sorry if anyone wanted that special collector's 15/25 version of the double Gwynn for their collection -- maybe you can talk someone else into being nicer to their card than I was to this one.


No shit. The little girls shrieking in the crowd probably thought that Hanson were the first to sing this song even though they say they are covering Little Richard at the very beginning of the song.

See, once something like this happens to a song, it's a sign that the song really should be discarded. If the phrase "jump the shark" hadn't become so trite, it would describe what happened to this song to a T. Except that even then, it wouldn't really capture it.

Not to be too harsh, but listening to this version would make Little Richard roll over in James Brown's grave. Little Richard is still alive, by the way.

Thankfully, the contents of the rip card were far better than this crapola: 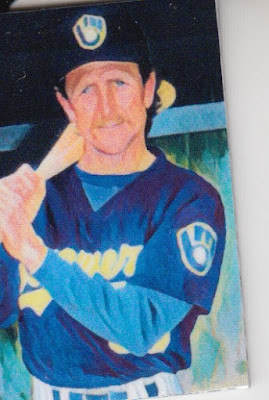 I tried to fix my poor scanning job on this. Here's the straighter version: 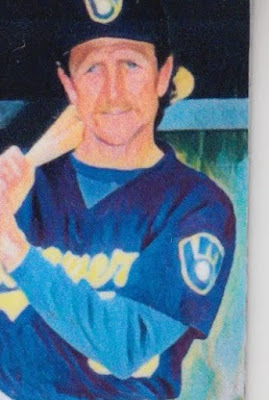 I love the unique Robin Yount collectibles that Gavin has added to my collection in the past, and this artistic magnet is just awesome.