On June 15, 1970, Marvin Milkes was wheeling and dealing and engaged in three trades for, as The Sporting News put it in their June 27, 1970, issue, "three pinch-hitters." In a move that makes little sense in light of the ages of the players and, frankly, in light of how quickly the Brewers got rid of his cohort in the trade (but more on that when we meet Brewer #38, Al Downing), the Brewers traded away 25-year-old outfielder Steve Hovley to the Oakland A's and, in return, received Downing and Brewer #34, Tito Francona.

John Patsy "Tito" Francona grew up in Aliquippa, Pennsylvania, and attended high school in New Brighton, where he would later raise his own family. Tito got the nickname of "Tito" by his dad for being the little brother to David. Tito was a local sports star in the late 1940s in Western PA. His SABR biography mentions that he was the starting QB for his high school and was even All State in 1951. Maybe if he hadn't loved baseball he would have joined the assembly line of professional quarterbacks to hail from the area (he is from the same county that produced Joe Namath, after all). But he loved baseball, and his uncle got the attention of St. Louis Browns scouts. He signed with the Browns for $5,000 and a $250-month salary.

The military intervened and took Tito's next two years. On his return, he was no longer with the Browns -- they had moved to Baltimore and become the Orioles. Manager Paul Richards took a liking to Francona and gave him a shot to start at the age of 22. He did pretty well and even got a vote -- probably not deserved -- for rookie of the year in 1956. He and Rocky Colavito tied for 2nd with one vote each behind Luis Aparicio. Of the three, Colavito deserved the award based on WAR (2.4 to Luis's 1.5 and Tito's 1.2).

Tito was not a star, though. The Orioles decided to trade him to the White Sox prior to the 1958 season along with Billy Goodman and Ray more in exchange for Jack Harshman, Russ Heman, Jim Marshall and Larry Doby. The White Sox only gave him 142 plate appearances before deciding to get rid of him as well, sending him to Detroit with Bill Fischer in exchange for Bob Shaw and fellow father-of-a-manager Ray Boone.

Going by WAR, he was highly overrated -- really finishing about 10th -- but still it was a good year for Tito. And, as he said when his son was hired in 2012 as the Indians manager, Cleveland "was [his] home team. There was always a great atmosphere and it was only 90 miles from home." In 1961 he was named to his one and only All-Star team as an Indian at the age of 27.

Tito's 1970 season was his last as a major leaguer. In an odd quirk, his son Terry also finished his career as a Milwaukee Brewer. Thanks to Terry joining the Brewers in 1990 -- 5 full years before the short, forgettable Milwaukee career of Derrick May -- Tito also can claim the title of being the first Brewer to see his son play for the Brewers!

After his retirement, Tito worked as the Parks and Recreation Director in Beaver County, Pennsylvania. He was inducted into the Beaver County Sports Hall of Fame in 1978 -- an honor his son also received in 1995 and that guy Namath got in 1982.

Finally, the Indians honored Tito in 2016 by inviting him to throw out the first pitch before Game 1 of the American League Divisional Series against the Boston Red Sox. Tito looks damn good for being 82 years old! 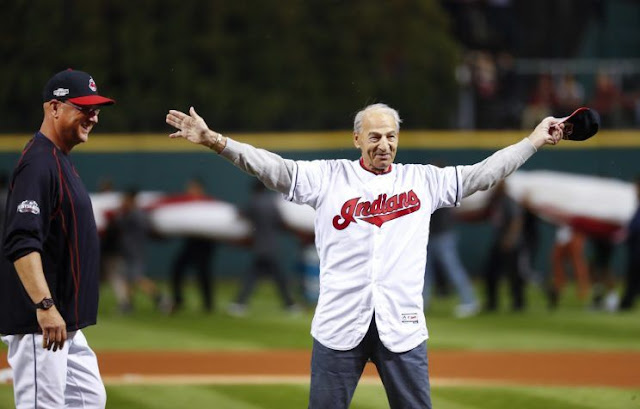 Due to his short time with the Brewers and his retirement from baseball after the 1970 season, the 1994 Miller Brewing card set is the only card of Tito as a Milwaukee Brewer. He actually had a card on the Indians in 2016 in the Topps Archives set, and the "Father-Son" insert set also featured him and Terry together.
Posted by Tony L. at 8:01 PM